Professor Jagmohan Singh has been a quiet but significant presence at Delhi's borders during the farmers' protest, and is not one to sugarcoat the government's failings. 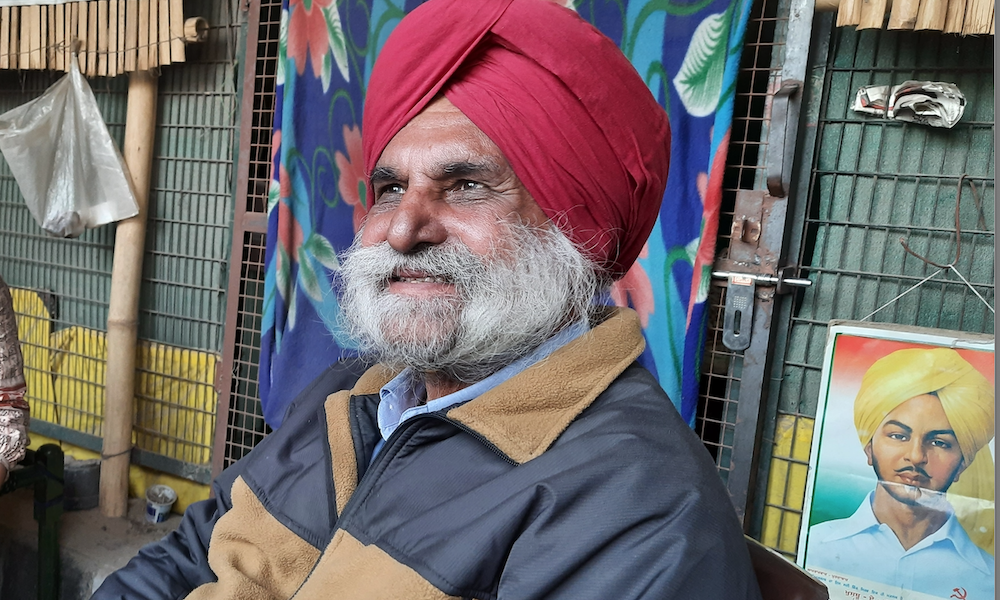 New Delhi: Professor Jagmohan Singh is a quiet and unassuming man. He does not strive to be the centre of attention. In fact, it wasn’t until someone at Tikri border told me who he was that I realised I had just had channa bhaturas with the gentleman whose uncle was Shaheed Bhagat Singh.

Having spent a long, dusty, but inspiring day with tens of thousands of farmers at Tikri  commemorating the first anniversary of their protest, I was on my way back home when I decided to stop for a bit at the Trolley Times tent. I am glad I did.

Jagmohan Singh, I learnt, had spent the better part of the day at Singhu border, and had just arrived at Tikri to spend a bit of time with the farmers here as well. As we chatted, I learnt that long decades ago, his mother (Bhagat Singh’s younger sister, Bibi Amar Kaur) had entrusted him with the responsibility of helping people everywhere understand the freedom fighter better.

The 77-year old professor has devoted his life to keeping the memory and message of his uncle alive ever since, and is currently the director of  the Shaheed Bhagat Singh Creativity Centre in Ludhiana. He also happens to be an alumnus of IIT Kharagpur, and retired as the Head of Computer Sciences at Punjab Agricultural University.

Despite having had a long day, Jagmohan Singh was kind enough to answer my questions about the farmers’ protest:

How do you see the farmers’ protest? What, according to you, is its significance?

Three things come to mind. The first is that history has repeated itself after 113 years. Bhagat Singh’s uncle, Ajit Singh, along with Sufi Amba Prasad, had led the Pagdi Sambhaal Jatta movement in 1907.

That was also a huge, peaceful farmers’ movement much like this one, incidentally also against three three exploitative farm laws that the British were forced to repeal. That movement succeeded in getting the government to take back their farm laws in nine months, just like this movement has, in 12.

Next, I am reminded of how Guru Gobind Singh exhorted his followers not to make decisions individually, but in groups of five, because if five people make a decision, then it will be a good, well-rounded one. In this movement, there are 475 leaders making decisions together!

This shift from the cult of individual leadership to a more democratic broad-based form of functioning is truly historic. This is even influencing how our villages are functioning and making decisions.

And finally, this protest has helped women in villages find their voice and talk about the agrarian distress they are facing.

How do you feel about the government’s response?

Modi has made grand statements about his ’tapasya’. But waving a garland in front of the corporates is not tapasya. The real tapasya has been done by our farmer brothers and sisters. I was discussing with P. Sainath today how this movement is going to bring about a great societal shift in India, and how it has challenged corporate capitalist culture in a very big way.

I must also commend young people on the way they have come forward in this protest. It has reminded me of what Bhagat Singh said in 1924 at 17 years of age, that, to deal with a crisis requires youth power.

But the foundation of a youth movement, he said, should consist of three things – a) freedom from religious fundamentalism and superstition, b) freedom from the curse of casteism, and c) rationality and scientific temper.

Bhagat Singh was also quite clear that the real battle was not just to get freedom from the British, it was also to end inequality amongst Indians, considering the vast differences that exist between the top 1% who are extremely wealthy and the other 99% who are not. The French economist Thomas Piketty recently said that the inequality that existed in the 20th century in India continues to exist in 2016. That means we are still dealing with the same crisis, and the only rational way to solve it is with socialism.

This farmers’ movement has laid the foundation for a genuine victory of democracy and the people in 2024 [when the term of this current government ends].

Interestingly, something else happened in India around the time of Bhagat Singh in the 1920s. The RSS [Rashtriya Swayamsevak Sangh], a religion-based organisation, also took birth. Bhagat Singh warned in an article about the pull of Sadhu Vaswani’s ideas on the youth of his day. Bhagat Singh vehemently disagreed with Vaswani’s claim that all knowledge and wisdom began and ended with the Vedas.

While he was acutely aware of the power of religious zeal to attract youth, he was also very clear that reason and rationality, not religion, solve problems.

How do you see the repeal of the farm laws?

I call the repeal of the farm laws a zero-sum game. It is the corporates who wanted these laws, not the farmers. The actual agrarian crisis in India, which is the real cause of the farmers’ distress, still needs to be addressed.

Interestingly, the OECD countries (some the richest in the world) came up with a report called ‘Agriculture in India’ in which they observed that India gives much less Minimum Support Price to its farmers than other countries give to theirs. According to them, this makes Indian agriculture profitable in the world market.

The only two ’hindrances’ the OECD countries saw were the Essential Commodities Bill and the presence of APMCs, [both of which the Central farm laws sought to remove]. If India removed these, they said, agriculture would become ’profitable’.

There is now talk of setting up a committee to address the farmers’ issues. But committees set up by the government have lobbyists in them who work for the benefit of the corporates, not the masses. Instead, there needs to be a farmers’ commission made up of those that the farmers trust.

The other lie being peddled is that Minimum Support Price given to farmers will empty out the government’s coffers. This is simply not true. If anything, more money given to the farmers will boost consumer demand. This will help the economy to grow. But what does the government do, instead, to ’boost the economy’? They reduce taxes for industrialists and capitalists.

What do you see as the way forward?

Villagers need to learn to become self-reliant. There is a very interesting story about Bhagat Singh’s great grandfather, who built a house in 1858. We have preserved this as his ancestral house, incidentally. When people asked him why he had built it, he said, “So that people can get together and identify and discuss their problems, because once they can do that, they will be able to find solutions.” So the villagers asked him why he didn’t just use his own large haveli for this purpose, to which the elder said, “Because if people sit in my house, then they will look to me in their decision making. I will have the last word. They will not think for themselves. In a separate house, however, everyone will be independent and equal.”

He created the first republic in that village. He said that governments will come and go, and they will ignore you. So you should able to talk about your problems and help find solutions.

Look at the women of Punjab. They set the agenda for the last two elections – the issue of substance abuse. Regardless of who it is that takes drugs, be it the son, the husband, the father or the brother, it is the woman who suffers. She is the hub of society. And today, she has realised this.

Lastly, we need to remember how the various movements in India built on each other. The Pagdi Sambhal Jatta movement of 1907 led to the rise of the Ghadar Party. That in turn led to the unity at Jallianwala Bagh in 1919 where Hindus, Muslims and Sikhs decided to celebrate Ram Navami together. Each movement lays the foundation for the next one. This farmers’ movement has also laid a strong foundation. As farmers, you could say we have readied the soil for seeds of real change.

The government wants this protest to lose momentum. They have tried every trick in the book, and failed.

I was in Lakhimpur recently and I told the protesting farmers how when you are fighting for the truth and the right, the universe will help you. Those who ran the farmers over wanted to ’hit and run’ but an oncoming bus suddenly appeared in their way and foiled their plans of escaping, and their dastardly attempt was exposed. The universe intervened.

Our farmer leaders have learned how to make wise decisions. I am sure they will continue to do so and and will decide how to keep the pressure on the powers that be. Along with that, it is also very important that the villages continue to be strengthened.

A video of this interview can be found here.