Amid Lockdown, UP Centres Procuring Grains From Fewer than 2 Farmers a Day on Average

With purchase sluggish, farmers are forced to sell their produce to private agents at lower prices.

New Delhi: Owing to the ongoing nationwide lockdown to curb the spread of novel coronavirus in India, a large section of the population, including the agricultural sector, is on the brink of a poverty crisis.

Ravinder Singh, a resident of Uttar Pradesh’s Bijnor district, had sown wheat on six acres of land but he has been unable to sell a grain of his 50 quintal produce. “When I went to the procurement centre, they told me that the grain was damp and refused to purchase it,” he said. In the lockdown, there is no alternative for Singh to sell his crop.

“Had it not been for the lockdown, I would have sold it in the neighbouring district or mill,” he said. “Even though they would offer a price less than the MSP, I could at least have managed to sell it. But in the current situation, I don’t even have that choice.”

Ravinder Singh shares his plight with nearly all the farmers across the country, especially in Uttar Pradesh, who are facing similar challenges.

Although the procurement of rabi crops, which includes wheat, is ongoing, a majority of the farmers are unable to sell their crop at the minimum support price (MSP).

In fact, in Uttar Pradesh, which is the largest wheat producing state in the country, the procurement of grain is so sluggish that centres are unable to purchase grain from more than a couple of farmers in a day.

According to data collected by the UP government’s Food and Civil Supplies Department, 10.46 lakh tonnes of wheat had been procured from 1,94,819 farmers at 5,831 procurement centres in total, run by 10 different procurement agencies across the state till May 7.

Wheat procurement has been undertaken since April 15 in the state and the state government has set a target of procuring 55 lakh tonnes of wheat for the ongoing season. As such, 5,831 procurement centres have purchased wheat from nearly 1.95 lakh farmers during the last 22 days.

It means that on an average each centre procured wheat from 33 farmers during this period, which in turn indicates that each centre purchased the grain from 1.5 farmers in a day on average.

On the other hand, looking at the amount of wheat procured by centres in UP during the 22-day period, which is approximately 179.41 tonnes, one finds that each centre had procured 8.15 tonnes of wheat in a day on average.

Agrarian experts, as well as farmers, claim that this amount is quite marginal, and will hurt the farmers as they will be forced to sell their produce at throwaway prices.

As per state government data, 53 quintals or 5.3 tonnes of wheat have been procured from each farmer on average. Significantly, UP has the largest number of procurement centres as compared to other states yet the amount of procurement is quite less.

During the current pandemic, not only are farmers unable to avail the MSP due to low procurement, but even the market price of the agricultural produce has remained below the MSP.

According to the Commission for Agricultural Costs and Prices, an organisation under the Union agriculture ministry which recommends the MSP, Uttar Pradesh is the largest wheat producing state in the country, but only 7% farmers avail the MSP here.

Procurement centres play a crucial role in ensuring that farmers receive remunerative prices for their crops. However, the UP government has managed to meet the procurement target for wheat only once during the last three years.

However, the state government managed to procure only 36.99 lakh tonnes, 52.92 lakh tonnes and 37.04 lakh tonnes respectively during the period.

Also read: Reinventing Agriculture in the Time of COVID-19

Out of these, the largest amount of procurement is carried out by UPCF and the Marketing branch of Food and Civil Supplies department.

For wheat procurement in the current season, the UPCF has set up a total of 3,109 centres where 4,76,586.54 tonnes of wheat had been procured from 98,518 farmers till May 7, that is, 50% of the total procurement in the state. Similarly, on one procurement centre run by UPCF, the grain was procured from around 32 farmers during the last 22 days. As such, wheat was procured at one UPCF centre from nearly 1.44 farmers which is even less than the statewide average. 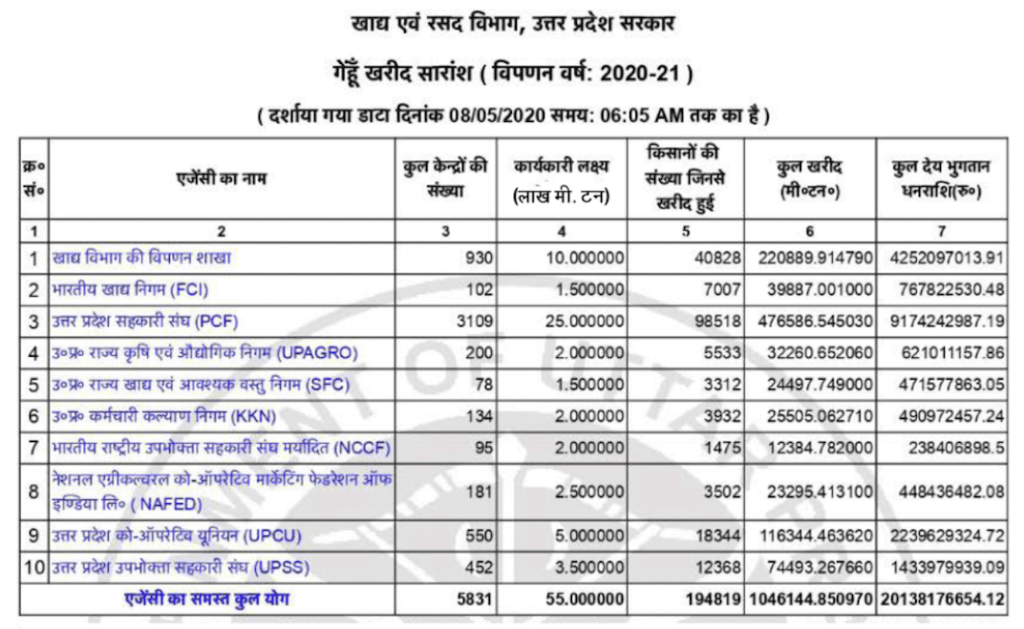 In terms of quantity of wheat, on an average, 153 tonnes were purchased at one procurement centre run by the agency in 22 days. It means, in a day, nearly 7 tonnes of wheat was procured, which is less than the average at the state level.

As per data obtained from the Food and Civil Supplies Department, the UPCF is procuring nearly 48 quintals or 4.84 tonnes of wheat from one farmer on average.

The situation is no different for the largest procurement agency of the state, the Food and Civil Supplies Department (Marketing Branch). The agency has set up a total of 930 wheat procurement centres for the current season. Till May 7, 2.2 lakh tonnes of wheat had been procured from 40,828 farmers at these centres. As such, on an average, wheat was procured from 44 farmers during the 22-day slot, that is, around two farmers per day.

With regard to the amount of wheat procured, the figure on an average is 237.51 tonnes for one procurement centre of Food and Civil Supplies Department (Marketing Branch) during the last 22 days. It means the per day average of wheat procured at one centre is around 11 tonnes, more than the state average but still quite low.

According to the data of the state government, the marketing branch of the Food and Civil Supplies Department is purchasing around 54 quintals, or 5.41 tonnes, of wheat from one farmer on average.

The condition of UP’s third and fourth-largest procurement agencies, UPCU and UPSS, is almost similar. The agencies have set up 550 and 442 wheat procurement centres in the state respectively. At these centres, wheat has been purchased from around 18,340 and 12,360 farmers during the 22-day period respectively.

It amounts to 33 and 27 farmers on an average at each centre of UPCU and UPSS respectively during the last 22 days. That is, wheat was procured from 1.5 farmers in a day at one centre of UPCU, while the figure is even less for UPSS.

Till May 7, UPCU had procured wheat from 1.16 lakh farmers. At one centre run by the agency, around 222 tonnes of wheat were procured during the last 22 days, that is, nearly 10 tonnes of wheat in a single day.

The situation at UPSS is even more deplorable where merely 7.4 tonnes of wheat are being purchased in a day, much less than the state average. It is no different for the rest of the state’s agencies.

Also read: Four Measures That Can Help Farmers Deal With the Impact of COVID-19 Lockdown

Bhartiya Kisan Sangh (BKS) leader Digambar Singh claims that there are 43 procurement centres in UP’s Bijnor district but only five of them are functional. “The rest of the centres are either closed or not making purchases. The whole procurement system is merely an eyewash,” he says.

Due to unseasonal rains and delayed procurement, the wheat grains are getting damper than normal. “So, now, they have the excuse that the grains are damper than usual and are directly refusing to buy them citing quality issues,” says Singh. 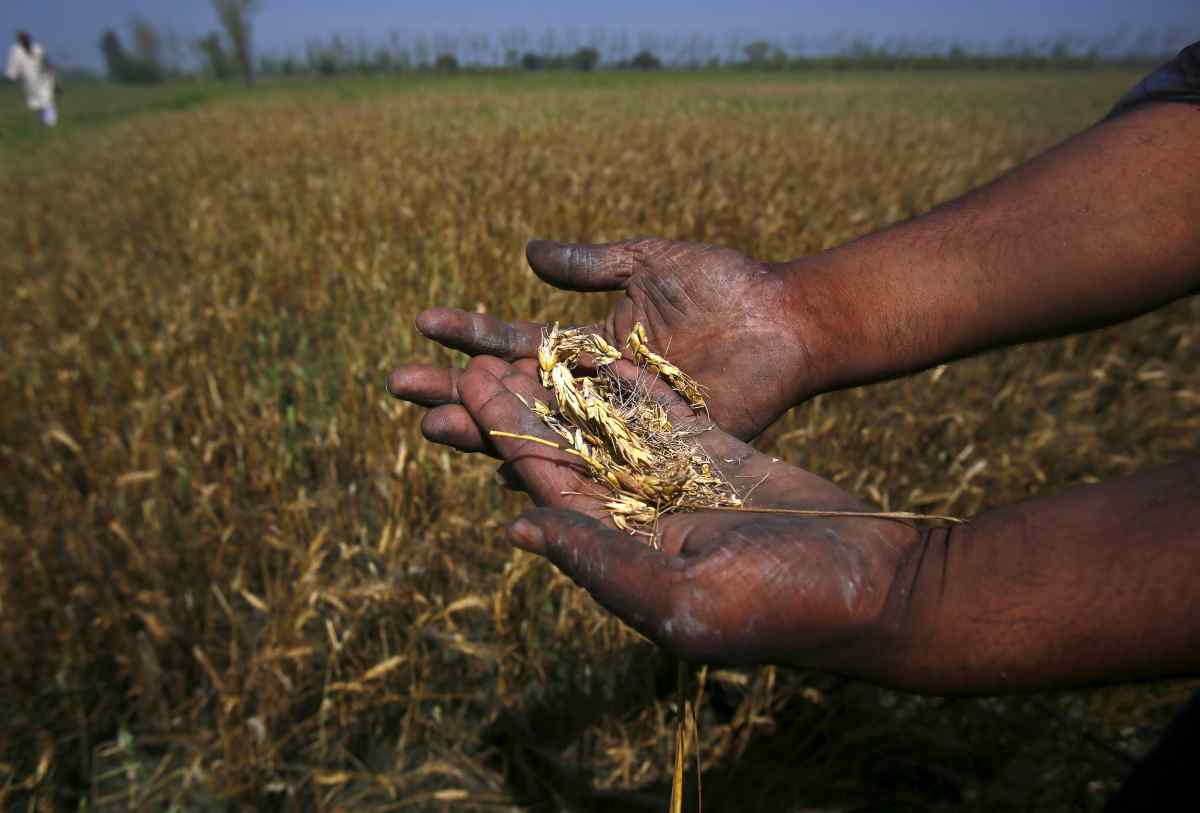 Last year, the government procured wheat between April 15 and June 30 (75 days), that is, from not more than two farmers on average in a day.

Such nominal procurement from farmers when compared to total wheat produced, despite a large number of procurement centres in place, raises questions about the management of the Yogi Adityanath government. Last year, merely 11.30% of the total production was procured in UP even though the state’s share was 31.4%, the highest in the country. In contrast, 72.62% of the total crop was purchased in Punjab while this figure was the highest for Haryana at 79.97%.

In Uttar Pradesh, farmers who were able to strike a deal at the procurement centres are facing other challenges. A farmer from Jalaun, Nishant Paliwal, says that he had sold 30 quintals of wheat 15 days ago but he is yet to receive the payment worth Rs 57,750.

“I was told that I will receive the payment within two days,” says Paliwal. “But no amount has been credited yet. I visit the centre every day, and each time they tell me that it will be credited the next day. It would have been better had I sold it to a private agent or to a mill.”

It would be much better to sell it to a private agent even if the price offered were less, he further added.

The president of All India Kisan Sangharsh Coordination Committee (AIKSCC), V.M. Singh, alleges, “The truth is that the government is not willing to make the purchases and so a system has been deliberately put in place to force the farmers to sell their produce to private agents at lower prices.”

“Farmers need money immediately after the harvest before sowing another crop,” said Singh. “If it takes so long to receive the due payment, who would want to sell their crop at government-run centres? Farmers are being forced to sell their produce to private agents.”