The race to offer relief to indebted farmers, at a spiralling cost to state governments, has sparked a surprisingly relevant political debate on social media. 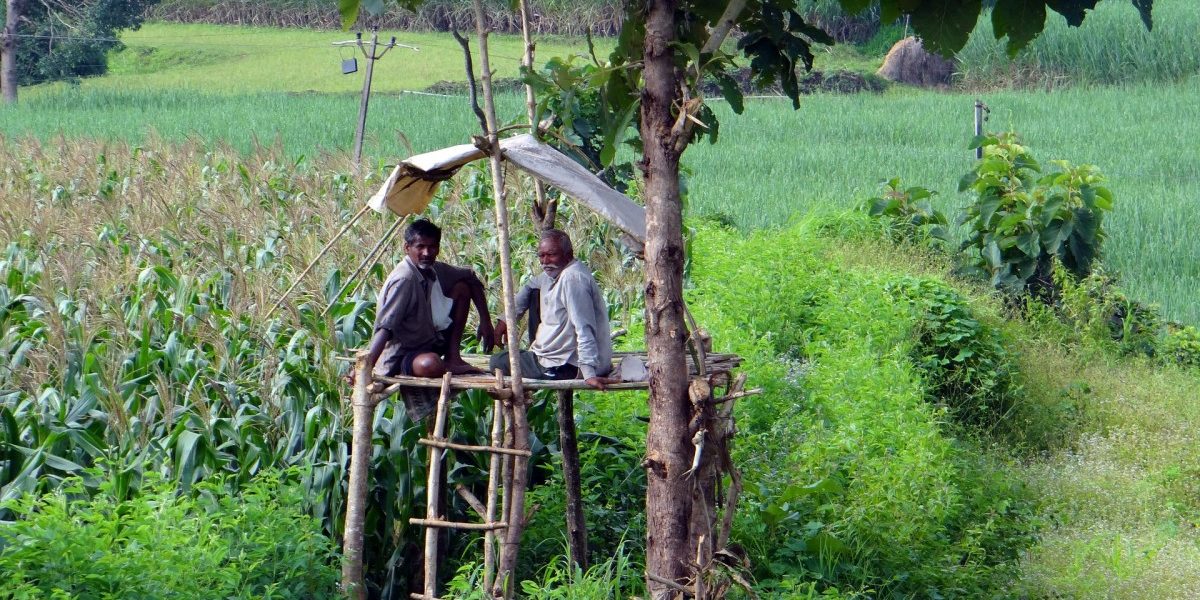 New Delhi: On December 19, Rahul Gandhi boasted that the three new state governments of the Congress party had fulfilled a major promise to farmers – well before the deadline.

During the campaign in Madhya Pradesh, the Congress party had promised to waive farm loans within ten days if it came to power. Across the three states, the loan waivers could end up costing the state governments upwards of Rs 80,000 crore.

Rahul Gandhi’s other tweet, from earlier the same day, took a jab at two Bharatiya Janata Party state governments for announcing similar relief – just a day after the Congress states did.

The Congress party has managed to wake the CM’s of Assam & Gujarat from their deep slumber.

PM is still asleep. We will wake him up too.

The rival party was not going to take the Congress national president’s jibe quietly. Vijay Rupani, chief minister of Gujarat, took only two hours to hit back. He tweeted in Hindi to make fun of the Congress president’s “enthusiasm” at finally winning state polls. He added:

“Prime Minister Narendra Modi has always worked for the betterment of the the farmers of Gujarat. It is the reason why the farmers of the state gave yet another chance to the BJP after 22 years of rule. The voters have rejected Congress for the seventh time.”

However, Rupani was silent on the timing of his decision, which was what the Congress president had snarked about.

Rupani’s government had announced it would waive the electricity bills of rural residents, to the cost Rs 650 crore – a decision taken just a day after the new governments in Madhya Pradesh and Chhattisgarh waived farmers’ loans.

According to Gujarat energy minister Saurabh Patel, a total of 6.22 lakh connection holders in rural areas – including “domestic, agricultural as well as commercial connections” – would benefit from the waiver.

By late evening, the BJP chief minister of Assam, Sarbananda Sonowal, had made his own retort on Rahul Gandhi’s thread. Sonowal’s tweet opened on a note of high principle, which did not last until the end of his 140 characters.

Mr Gandhi, this attempt to take credit on an issue that is related to the livelihood & development of farmers is quite frivolous. You have no moral right to talk about Assam or its farmers. Everyone knows how your successive Govts in Assam looted the resources meant for farmers.

His government had also approved relief for Assam’s farmers, worth Rs 1,000 crore, the very day after the Congress loan waiver was announced.

Sonowal fulminated over two more tweets, before receiving back-up from his senior minister, Himanta Biswa Sarma. (Sarma defected from the Congress to the BJP in August 2015 – he may have forgotten that he had been minister for agriculture, and later finance, in the Congress governments that Sonowal was now accusing of “misdeeds, corruption and loot”.)

Sarma aimed for the high road, but in economic terms, distinguishing the Congress’s one-time waivers from the Assam government’s ongoing incentive scheme.

Rahul Ji, Assam Govt. has not announced any debt waiver scheme. We are offering 25% subsidy on short term agricultural loan along with full interests subvention. These schemes will continue unlike a one-time loan waiver. Completely opposite to your idea. https://t.co/o1ZGgaNJFx

Speaking to the press the same day, Sarma had announced three schemes for farmers’ relief, to deliver on the promise made in the state budget in March 2018. The government’s outlay, however, had risen from the Rs 500 crore set out in the budget to Rs 1,000 crore.

The BJP government was offering:

“The schemes have nothing to do with national politics…,” Sarma said. “Also, they are not one-time affair like the loan waiver. They are aimed at helping the farmer repay debts and remain in the banking system.”

Sarma tried for the upper-hand by justifying the timing of the Assam government’s policy, which he had announced in the state budget in March of 2018.

And we are announcing these schemes to commemorate 125 years of the agrarian uprising against the British in Pathorughat in 1894 (I announced these in my budget 10 months ago). You have failed to respect our sentiments by linking it to petty politics. https://t.co/o1ZGgb5l47

To add a dash of nationalism, Sarma referenced the Patharughat farmers’ uprising against a colonial levy of taxes in 1874. Often called Assam’s Jallianwala Bagh, the Patharughat uprising forced the the British administration to reduce land revenue.

A contemporary editorial in 1894, in Amrit Bazar Patrika, had said: “In the Deccan, the fury of riots was directed against money-lenders, in Bengal against indigo-planters, in Pabna against zamindars – but in Assam, at this moment, it is open rebellion against the government.” It was not clear whether Sarma’s policy means he identifies better with the farmers or with the government today.

Right-leaning economist Rupa Subramanya stepped in to check Sarma’s posture on Twitter about a “completely opposite” policy.

You’re not waiving the principal but you’re clearly waiving the interest. And it’s ongoing which is an ongoing drain on the exchequer. So dress it up however you like but it amounts to a version of the same kind of policy. https://t.co/EUnRhkHPL7

Political analyst Sumanth Raman pointed out that the recent timeline of competitive loan-relief puts the ball back in the BJP’s court:

Farm loan waiver of 36000 crore in UP & 34000 crore in Maharashtra was for assuaging farmers distress. Much smaller waivers now in Rajasthan,MP & Chattisgarh is ruinous economic policy. Logic of the faithful. What is sauce for the goose is apparently not sauce for the gander

In April 2017, The Wire’s founding editor M.K. Venu predicted that the Uttar Pradesh loan-waiver “will create a cascading impact across many other states where farmers, in acute distress from successive droughts, will want similar relief.”

Other commentators on The Wire warned that “alarm bells have started tolling in the capital markets“ after chief minister Adityanath’s newly-formed government waived all farm loans and promised fresh loans at zero per cent interest.

Earlier this week, The Wire’s agriculture correspondent, Kabir Agarwal, pointed out that these massive waiver schemes are fiscally reckless, difficult to implement, and do not address the root causes of agrarian distress and debt:

“Loan-waivers are not designed to solve the low income problem. If governments are unable to ensure that rural incomes go up, rural indebtedness could soon be back at the same level where it stands now. Loan waivers will be necessary once again, and the cycle will be repeated.”

The Central government think-tank, NITI Aayog, has held wavering positions on loans, depending on which state government is waiving them.

In 2017, after the UP farm loan waiver, its CEO Amitabh Kant said that states “have their compulsion to look after the interests of their farmers,” and have to “find the right balance between financial discipline and meeting the interests of farmers.”

After the recent measures by the Congress-ruled states, however, vice-chairman Rajiv Kumar decided that “farm loan waiver… is not a solution but is palliative.”

Elsewhere on Twitter, economist Arvind Panagariya called out the ‘sad race to bottom’ that had apparently just begun. That brings us to the last tweet, by agriculture analyst Devinder Sharma, about the double-standards of mainstream economists when write-offs go to struggling farmers instead of the corporate elite.

No economist worth the name dared to say the same when massive corporate loans were written-off. They only backed the policies that led to socialism for corporates and capitalism for farmers. https://t.co/ZzZar5UZOg 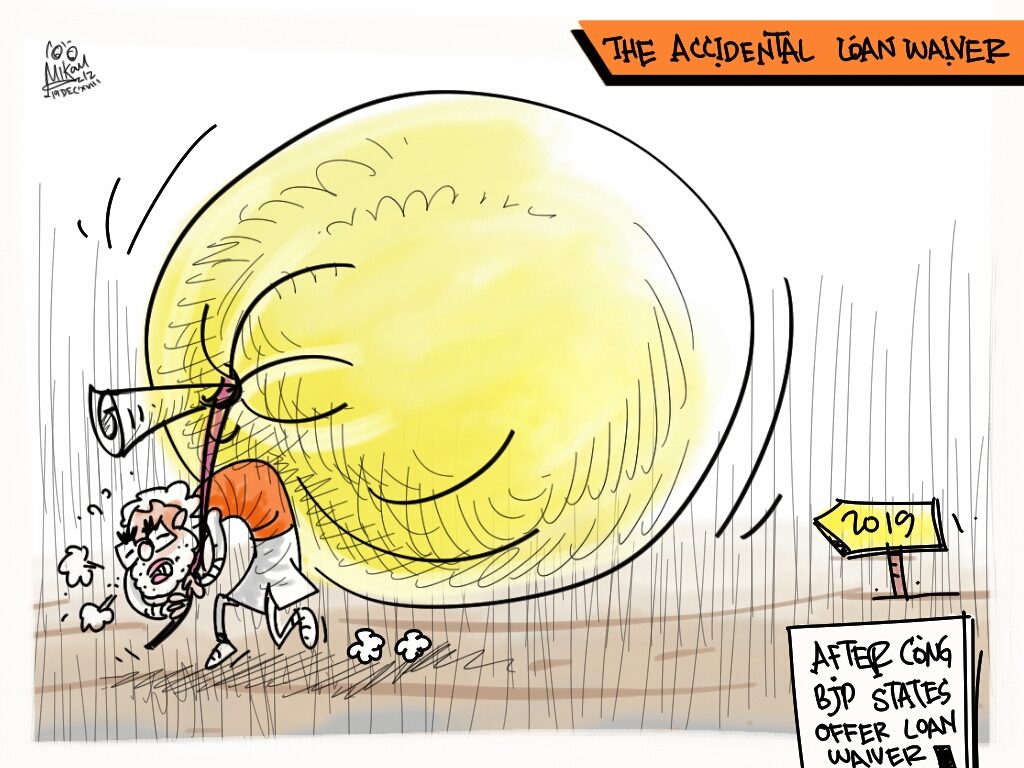