As Mills Delay Payments Like Every Year, Lockdown Adds to Sugarcane Farmers' Woes

Most sugarcane farmers usually sell a part of their produce at local jaggery producing units, but these remain closed at the moment. 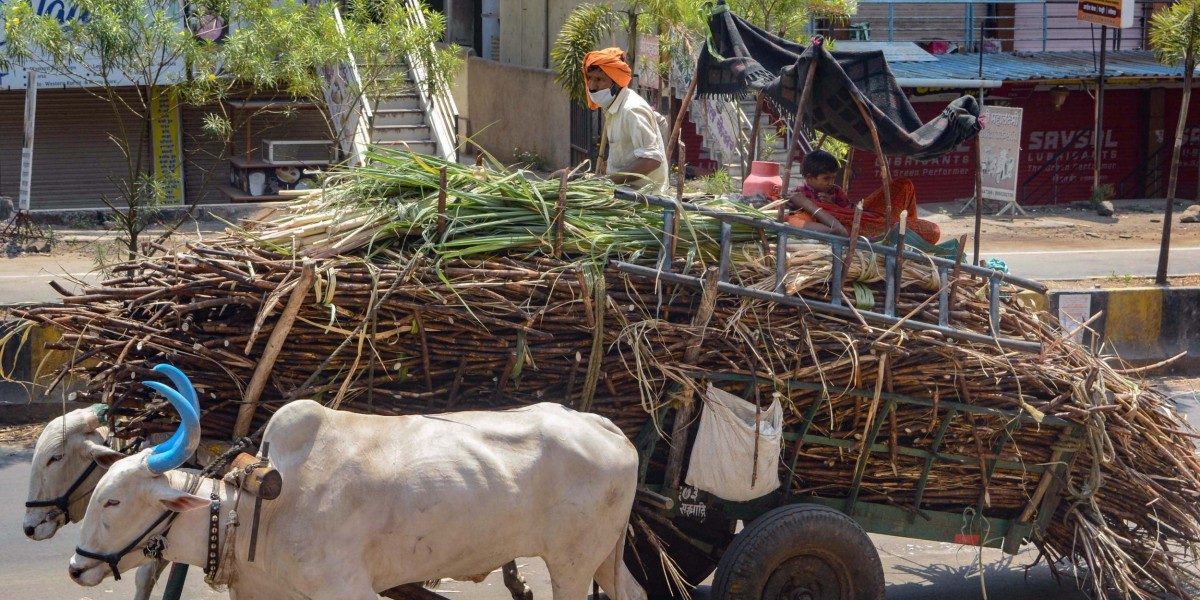 A sugarcane farmer in Karad, Maharashtra takes his produce to a factory during the lockdown on April 6. Photo: PTI

Meerut: Ankur Kumar is a small farmer with a four-acre farm in Muzaffarnagar’s Vahelna. Like every year, he has sown sugarcane on his field and like every year, he is struggling to get his dues from the sugar mill.

“I have deposited 500 quintals so far this season and have only been paid for 150 quintals. The last time I got money was in February,” he told The Wire over the phone. He is owed pending dues of around Rs 1,10,000.

This problem is faced by farmers in UP every year. At this time last year, mills owed farmers Rs 10,000 crore. But this time, due to the COVID-19 outbreak, the delay is pinching farmers more.

Most sugarcane farmers usually sell a part of their produce at local jaggery producing units, or kohlus, to ensure a degree of liquidity as payments from sugar mills take months. This year, however, they don’t have that option as most kohlus are not functional due to the lockdown. Even though the state administration had clarified that kohlus will be allowed to operate, it has had little effect on the ground.

Since the ‘janata curfew’ of March 22, Kumar has not been able to sell at kohlus. “None of them are functioning. Even when the government has said that kohlus can function, the police don’t allow them to open,” he said.

Kohlus usually buy sugarcane from farmers at a rate lower than the state assured price, which is Rs 315 for this year, but provide much needed liquidity. “Sugar mills will pay when they pay. We need cash. That is why kohlus are important,” said Krishan Pal, a sugarcane farmer from Baghpat.

Kohlus are not functioning because initially the government did not clarify the activities that would be exempt from the lockdown. The Centre and states continued to issue clarifications and add exemptions for several days after the lockdown was first announced.

But the damage had already been done. For instance, Surender Singh runs a kohlu near Muzaffarnagar. “In the first few days (of the lockdown), we tried to keep the kohlu running, but the police did not allow it. They beat up the labourers who were running the shop. All of them have fled and gone to their villages. Now, even if the government wants the kohlu cant function,” said Singh.

This problem has been faced by kohlus across western UP, as have other small businesses in most other parts of the country. The shutting down of kohlus has meant that farmers are strapped for cash as the sugar mills continue to delay payments.

Krishan Pal from Baghpat has a loan on his Kisan Credit Card (KCC) of Rs 2 lakh. In addition, he has borrowed Rs 1,50,000 from local money lends – sahukars. While the government has extended the benefit of interest subvention on crop loans under KCCs to May 31, it has no control over sahukars who charge usurious rates of interest.

Also read: At Delhi’s Ghazipur Mandi, the Vegetable Supply Chain is Being Twisted

Pal has to pay interest at 3% per month, or 36% per annum. “He has already been asking me to pay early. He says he is also facing difficulties due to the lockdown. But where do I get the money from?” asked Pal.

Finance minister Nirmala Sitharaman had announced on March 26 that farmers will be provided one instalment of Rs 2,000 under PM Kisan ‘immediately’. The Wire had pointed out at the time that this instalment was due in April anyway.

According to Pal, Rs 2,000 under PM Kisan is not enough. “What good is Rs 2,000? You tell me. What will I do with it? I don’t have any cash. They should have doubled the amount or just ensured that our dues are cleared. That would be enough,” he said.

Sugar mills are also cash strapped as the demand for sugar has dipped due to the lockdown, leading to a decline in prices. Mills are also facing problems in exporting sugar.

The state has attempted to help by asking sugar mills to produce hand sanitisers which are needed due to the COVID-19 outbreak. “That is good step and will provide some relief both to the government and sugar mills. But it’s not going to be enough. If this lockdown continues beyond April 15, we are looking at massive losses and it will be very difficult to pay farmers,” said a senior official at a sugar mill in Shamli.

National vice president of the Rashtriya Lok Dal, Jayant Chaudhary, contends that it is the government which needs to ensure that farmers are paid their dues. “The government is talking about restarting the economy, transferring money into Jan Dhan accounts, etc. At least ensure that the pending dues of farmers are cleared. That is the least that the government can do,” he told The Wire.