In Sikandrabad, a Farmer Tries to Forge a New Trust-Based Contract Model for Agriculture

An army veteran-turned farmer believes that traditional models have been proven unsustainable and offers his own experience as an experimental model for India’s agriculture.

Sikandrabad, UP: The farmers’ agitation against the three controversial laws entered its hundredth day this week. While farmers’ unions have stuck to their demand for a complete repeal of the laws, the Centre, too, hasn’t budged, despite agreeing to make substantial amendments to the laws.

A few experimental, but progressive farmers, who feel that the agricultural trade may take a beating amidst the stalemate, believe that the farmers’ unions could come up with alternative models for agricultural reforms and the government could to consider it with the aid of agriculture scientists, policy experts and other relevant agencies in a calibrated manner.

One such army veteran-turned farmer Colonel (retired) Subhas Deswal spoke to The Wire on issues related to problems afflicting agriculture in India, and why farmers’ unions could also take this opportunity to address those concerns.

“The agitation should be seen in the positive lights. Neither the government nor the farmers’ unions should allow the opportunity arising out of the large scale and sustained opposition to the three acts to get squandered,” army veteran-turned farmer Colonel (retired) Subhas Deswal said, speaking to The Wire on issues related to problems afflicting agriculture in India and if farmers’ unions could take this opportunity to address those concerns.

“The solution lies only in the farmers and the government joining hands in working out the model rooted to the agricultural reality of India and the spirit of consensus rather than sticking to their respective guns,” he added.

However, such a resolution appears to be easier said than done, given the high level of distrust the farming community has developed for the Narendra Modi government in the last one year. However, Deswal still hopes the two parties can find a middle ground to end the impasse, and believes that the agrarian crisis faced by individual farmers in a market economy over the last few decades is the root of misery in the farming community. He offers his own farming experience as an experimental model for India’s agriculture.

Also read: The Threat of Corporate Interests Is a Key Unifying Factor in the Farmer Protests

Deswal, along with Lal Krishna Yadav, are joint owners of the Sunshine Farms which cultivates 2000 acres of land and produces about 25,000 tonnes of carrots at Sikandrabad in western Uttar Pradesh’s Bulandshahar district – nearly 40 kilometres from the Singhu border – one of the major sites of protests of the farmers’ stir.

Sunshine Farms supplies carrots to Mother Dairy, Funtops, Reliance retail outlets and other diverse markets in north and south India. Deswal and Yadav take pride in calling themselves farmers. They have developed a unique co-operative farming model. A large chunk of the 2000 acres they cultivate belong to over 100 small and medium farmers – some of them have leased it out to the Sunshine Farms and some do contract farming. 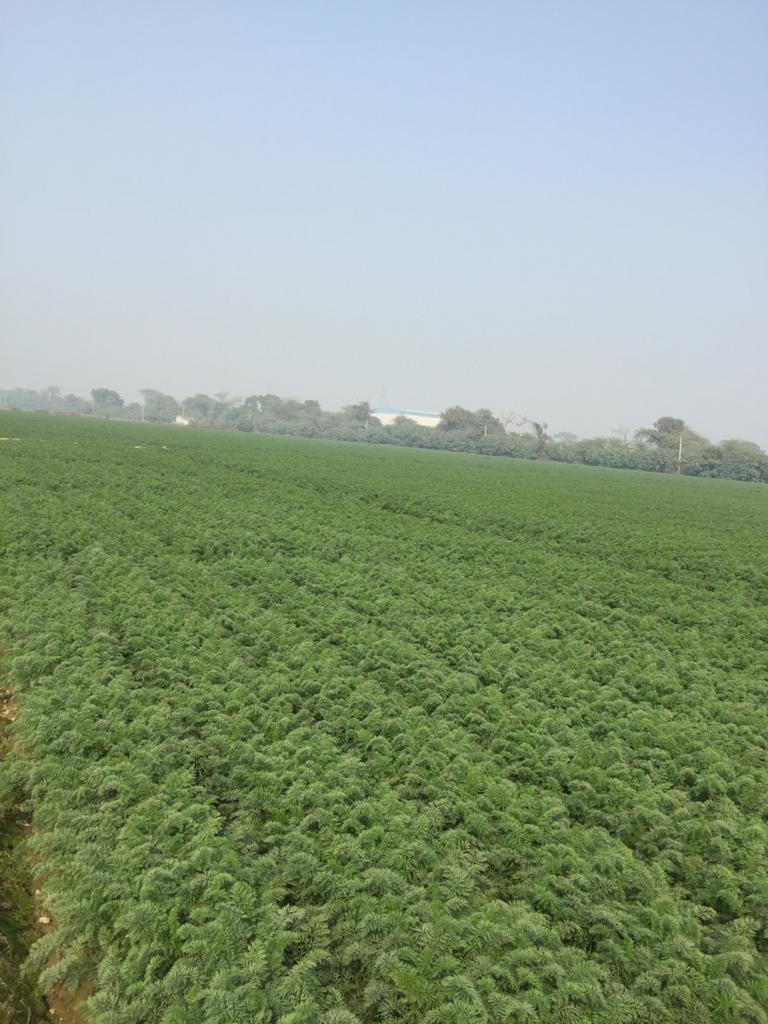 The journey of agri-business in carrots that has turned Sikandrabad into the carrot capital of India is not linear. Around two decades ago, Deswal, who joined the National Defence Academy in 1980, got commissioned as an Army officer in 1984 and voluntarily retired in 1998 after serving in Jammu and Kashmir, Haryana, Madhya Pradesh and Assam. Deswal thought of getting back to life as a farmer – he hails from the farmers’ family of Bhadani village in Haryana’s Jhajjhar district.

Sunshine Farms is based on a “trust based contract farming system” with farmers associating with it on the basis of a verbal agreement. An acre of land yields an average of over Rs 42,000 per annum without the liability of debt which the farmers could never have achieved by cultivating traditional crops like wheat and paddy. The success of Sunrise Farms enticed corporates like Aditya Birla Group and the Global Agri System, which entered into joint ventures with it. However, over the years, these companies couldn’t work with the farming culture of Sikandrabad and they withdrew from the joint ventures step by step.

But the intermediary Sunshine Farms has successfully been doing business with farmers on the basis of trust and mutual satisfaction for over a decade now. There is a trust-based relationship between the farms and the farmers associated with it. Everything is done autonomously, without any interference of the corporates. Once the produce is harvested, Sunshine Farms sells it in the market and distributes the income accordingly to all the stakeholders. According to Deswal, this model has proven to be highly sustainable, as all stakeholders are equally invested in the cooperative.

Sunshine Farms could serve as a microcosm of the alternative model to the reforms introduced through the three acts of the parliament which the farmers bodies have been agitating against.

“Look! It’s foolish to say that everything is fine with the Indian agriculture system and there is no need for reforms. We all know that Indian agriculture is plagued by a variety of ailments and that’s why it has not been yielding desired results. So the reforms are needed,” said Deswal, “But it is also a reality that the powerful people, say corporates, are prone to misusing the laws. They hardly care for the underlying emotion that is a cardinal part of the farmers’ life and lore. I don’t say that corporates should not enter the agriculture sector. What I suggest is that they must synchronise their action with the farm sector in India in which the government must guard the interest of the farmers, who are relatively ill-equipped to deal with the corporate culture”.

Also read: For Farmers, This Agitation Is an Issue of Survival Against Corporates

In its journey to solve the farmers’ issue, the government functionaries should never touch religion even from the barge poles. “I have been a soldier for most parts of my life. The soldiers have come from different religions, castes and regions. But their common identity is that of soldiers fighting for our pluralistic India. Be it the farmers or the government – it is foolish to dabble with religious identities of the stakeholders concerned”. 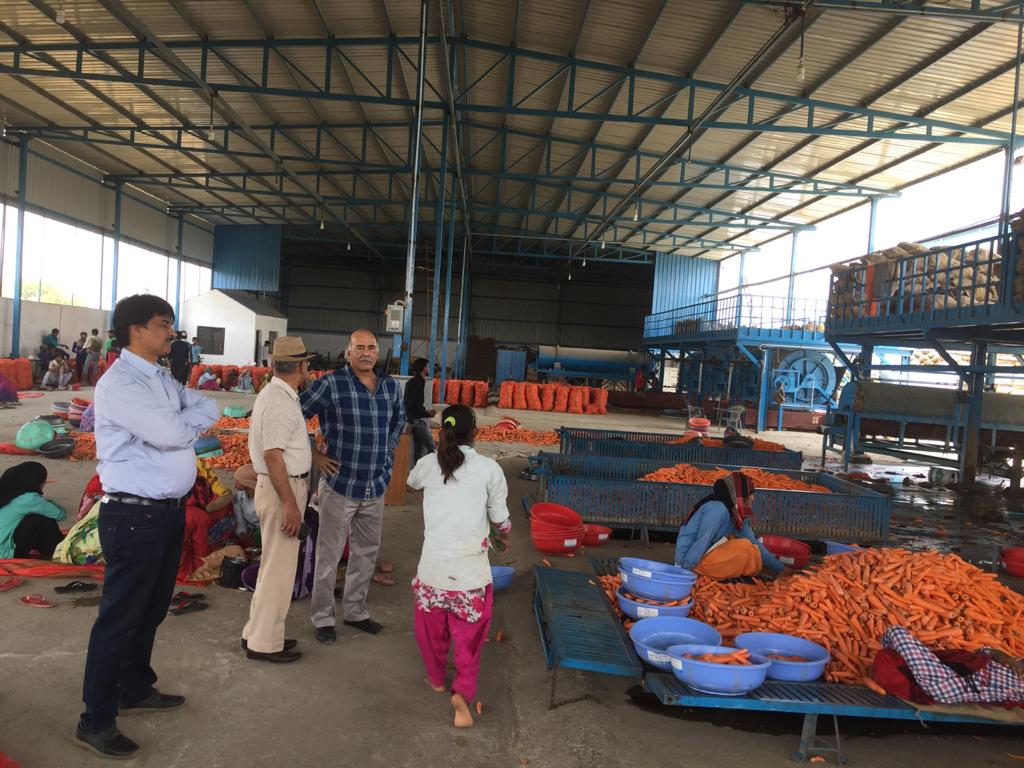 On a balmy February Sunday, Deswal at his Sikandrabad farmhouse showed this correspondent the carrot washing and packing plants, the cold storages and the carrot farms. “Nothing can work if it doesn’t involve the cause of the environment, the human emotion and mutual respect and love,” said Deswal. “The farmers must work out an alternative model, as traditional models have proved unsustainable.”

“There will be no light at the end of the tunnel if the government sticks to implementing what it has enacted and the farmers stick to their demand of the complete withdrawal of the three acts,” he said.