Why Is SBI Transferring Farmers' Insurance Claims to Their Savings Accounts Without Their Consent?

The bank has already been accused of over-charging farmers and not paying their insurance premiums on time.

Ramgarh, Nohar (Rajasthan): Almost a month after the insurance claims of the kharif 2018 season under the Pradhan Mantri Fasal Bima Yojana (PMFBY) were credited to the Kisan Credit Card (KCC) accounts of several farmers in the Ramgarh village of Rajasthan’s Hanumangarh district, the State Bank of India (SBI) has transferred them to their savings accounts without their consent.

Interestingly, the bank has made all the transfers on the same day.

Ram Singh, a KCC account-holding farmer in Ramgarh was credited Rs 44,040 as crop insurance claim. On September 30, SBI transferred this amount to his savings account.

“When I suddenly received this huge amount in my savings account, I felt happy but when I realised it is the insurance claim that the bank has transferred, I could sense something wrong because the bank has never done that before,” said Singh. 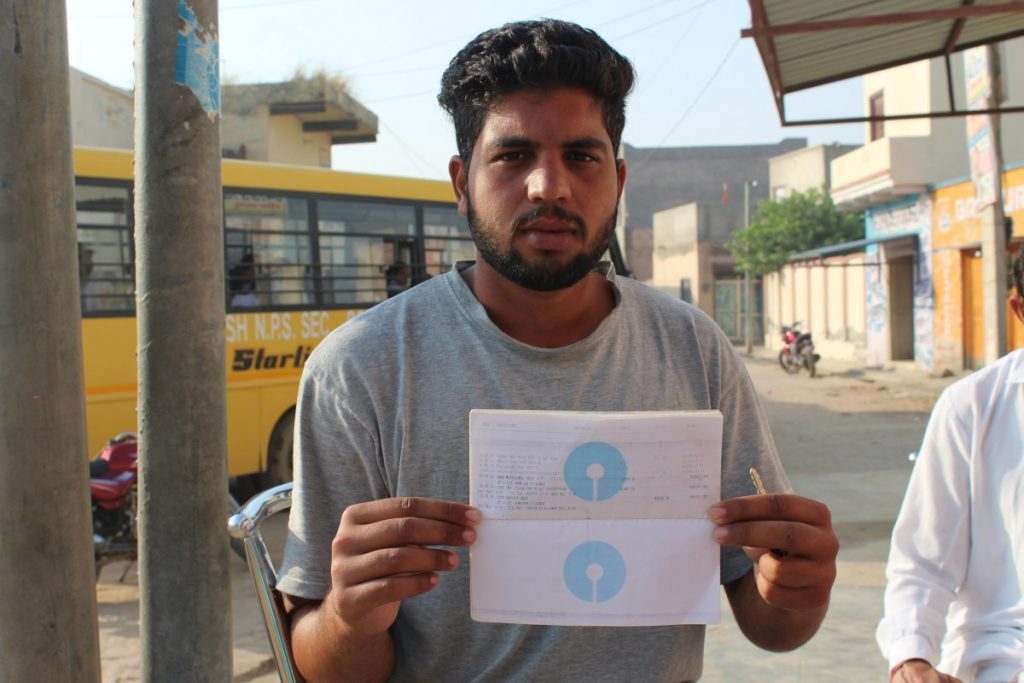 Ram Singh’s nephew Akash holds up his KCC passbook which has an entry of transfer of the insurance claim. Photo: The Wire

Similarly, Subhash Kumar, another farmer, was credited Rs 11,268 as insurance claim on August 14 this year. A month later, on September 30, the bank transferred this amount to his savings account without his consent.

Also read: Since 2014, States Have Budgeted Only 63% of Total Farm Loan Waivers Promised

The list is long. Almost all the farmers in the Ramgarh SBI branch who have received the insurance claims of the 2018 kharif season until date, has had those amounts transferred to their savings accounts.

Although this move might not appear to cause any substantial loss to the farmers, in practice it is going to increase the loan repayment burdens of the farmers.

“The bank doesn’t have a noble motive in transferring insurance claims of several farmers to their savings accounts on the same day. It is actually meant to not let the farmers take the advantage of the insurance claims,” Dilip Bhamboo, All India Kisan Sabha (AIKS) member and an active social worker in Nohar told The Wire.

“As we know, the insurance claim that the insurance company pays to the farmers in the event of crop loss, is credited into the KCC accounts of the respective farmer. This amount automatically reduces the current balance that the farmer owes to the bank,” he added.

In practice, the KCC account works as a cash credit (CC) account where a farmer can seek a short-term credit loan for the purpose of crop production requirements, depending upon the limit sanctioned by the bank for a particular season.

Also read: What Farmers Had to Say About Modi Govt’s Income Support Scheme

The farmer can withdraw any amount under this limit but is required to pay it back within 365 days, or else a higher rate of interest is charged on the credit taken.

An example: a farmer has an approved KCC credit limit worth Rs 2,00,000. Since the loan under the limit of Rs 3,00,000 is disbursed at 7% rate of interest, this farmer will have to pay the bank the amount that he would withdraw from this KCC account with an interest of 7% per annum, within 365 days.

The passbook entry of Subhash Kumar, showing transfer of insurance claims worth Rs 11,268 in his savings account. Photo: The Wire

Not just this, when the bank charges processing and auditing fee on the amount that the farmers owe to the bank under the KCC loan, the balance amount automatically increases. Suppose, if the bank charges a processing fee worth Rs 2,600 on his account. The amount would become Rs 2,02,600 and he would now be charged interest on this amount.

Now, when the bank transfers the amount to his savings account, the amount of the KCC loan would only increase. For the farmers who are incapable of paying it back, the bank would be able to conveniently charge excess interest from the farmers.

However, the bank says that there is absolutely no wrong in transferring their claims from their KCC accounts to the savings account as the money would remain with the farmers.

Speaking to The Wire, the SBI manager in Ramgarh, Mukesh Kumar, said, “We transferred the claims to their savings account so that they would receive a message that the claim has reached them. Since, it’s a festive season now, we want farmers to spend money so that the economy gets a boost.”

Inspection and processing charges of Rs 2875 and Rs 1725 taken for a KCC loan by SBI. Photo: The Wire

This is not the first time that State Bank of India, the largest public sector bank in the country, has been caught practicing activities that are unethical if not illegal. The Ramgarh branch is also charging extra interest of about Rs 64 lakh on Kisan Credit Card loans from about 500 farmers in the village.

Earlier, SBI had also deprived farmers of the benefits of the crop insurance scheme the Pradhan Mantri Fasal Bima Yojana.

In September 2018, approximately 3,052 KCC-holding farmers of Ramgarh Ujjalwas, Gorkhana and Bhukarka villages in Rajasthan’s Hanumangarh district were denied insurance claims under the PMFBY. The SBI had failed to credit the debited premium of farmers to the account of the insurance company – Bajaj Allianz.

The SBI’s Ramgarh Ujjalwas branch had transferred the premium to the account of Agriculture Insurance Company of India (AIC) instead. When the company returned the money, the deadline for payment had already passed.

The other two branches – Bhukarka and Gorkhana – on the other hand, had made no attempts to pay the premium.