Anger Over Agrarian Distress Is Behind BJP's Poor Performance in Saurashtra

Even in the seats that the saffron party retained in the region, its victory margin has fallen considerably. 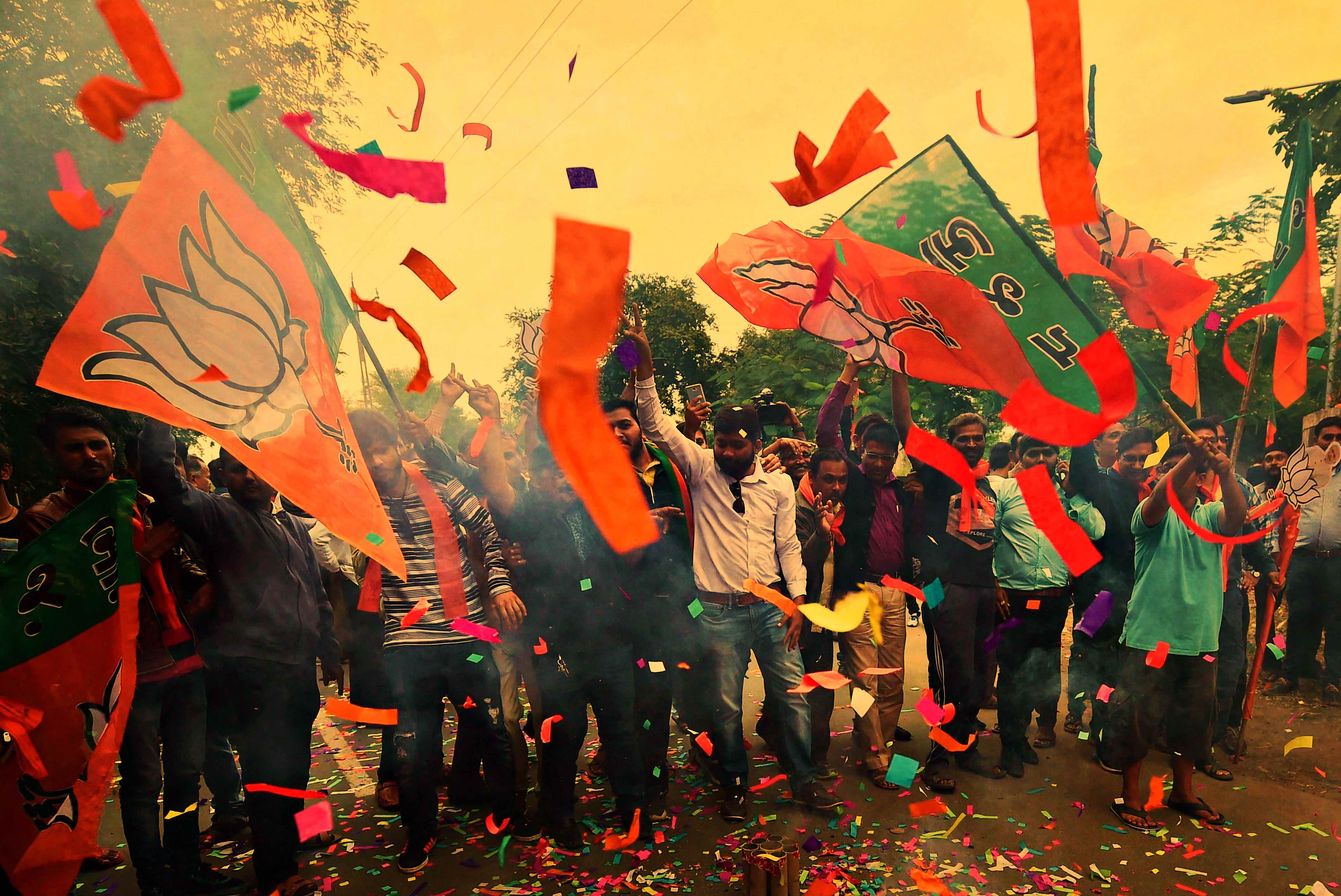 BJP workers burst firecrackers to celebrate their victory in the assembly elections, at the party office ‘Kamlam’ in Gandhinagar on Monday. Credit: PTI/Santosh Hirlekar

The electoral outcomes in Gujarat, where the BJP seems to have shed off the threat of anti-incumbency just by a small margin over the victory mark (seven seats more than the 92 mark), should make both national parties sit down for some deep reflection.

The Narendra Modi-Amit Shah-Vijay Rupani trio would not like political historians to remind them that when the BJP snatched away Gujarat with a two-thirds majority in the early 1990s, the party’s ‘vijay rath (victory chariot)’ originated from Saurashtra. That is because in the hustings in 2017, they have decisively lost this region.

Hypothetically speaking, if this election would have been in Saurashtra only, Congress would have emerged as the winner with 32 seats and the BJP, with 23 seats, would have seen a crushing defeat. However, 2017 is not a pre-1961 moment and Saurashtra and Kutch seems to be falling short of writing a script for the state of Gujarat.

In 2012, some pollsters looked at the Gujarat assembly elections as if it were the first time the state was going to witness a tri-polar fight. But the results suggested that Keshubhai Patel’s Gujarat Parivartan Party was not drawing a big audience even in Saurashtra, and there wasn’t any anti-incumbency wave that Modi had to stave off despite having been chief minister for about a decade. By 2012, BJP’s election rallies had begun to witness a lot more of the thundering ‘Modi, Modi’ chants.

By 2012, the national political discourse had become all about trying to cleanse politics of corruption, after the 2G scam and coal block allocation audit reports. The other critical nuances were blurred or buried. Analysts glossed over the agrarian issues and probably forgot that even the Bharatiya Kisan Sangh (affiliated to the RSS) would hesitate to look up to Modi as a pro-farmer leader.

Why indulge in such a minute engagement with the archives? The fact is that rural agrarian lives in Saurashtra and Kutch, even with a 138.68-metre-high Narmada dam, remain precariously linked to the Indian monsoons. Also, it is not a secret to anyone that in his enthusiasm to follow the ‘ease of doing business in Gujarat’ model, Modi had responded to farmers’ agitations as ruthlessly as any anti-farmer leader would do.

As I have argued earlier, the Patidar agitation demanding reservation was actually a signal of the simmering rural agrarian distress, especially in the groundnut-cotton belt of Saurashtra. The kind of private sector-led development model that Modi had followed was posing a deep challenge to the community, who had made business fortunes in Surat. The hard economics and fiscal logic of dhandho (business) was now forcing them to retrench their workers lock, stock and barrel. Those who were hit hard by these retrenchments were the not so well-to-do Patidar workers who had migrated to Surat from Saurashtra.

If the 2012 election results told us that the grand old community leader Keshubhai Patel’s writ didn’t run with the community, the 2017 election result figures are telling us that Patidars in Saurashtra have deserted the BJP. Analysing the results, India’s seasoned election analyst Pranoy Roy zeroed it down to Saurashtra, which he reminds us “is 73% agrarian and reports 55% of all seats where Patels commands sizeable majority in electorates”.

If notable BJP stalwarts like Dilip Sanghani and Mahendra Mashru have lost in Saurashtra this time, despite Modi riding a national wave and being the prime minister, the party must stop taking pride in “jo jita wahi Sikandar”. It also shouldn’t forget that the party even lost a predictor seat in Saurashtra – Kodinar, which it had held for decades – to Congress this time.

Is there any message in the nature of seats that the BJP has retained in Saurashtra? Most of these seats are either urban or what are called rur-urban. However, even here the BJP has lost votes compared to its performance in 2012. See for example Bhavnagar East and Bhavnagar West: the same candidates, and still the victory margin has come down significantly. In Bhavnagar West, Gujarat party president Jitu Vaghani’s victory margin reduced by 26,708 votes. 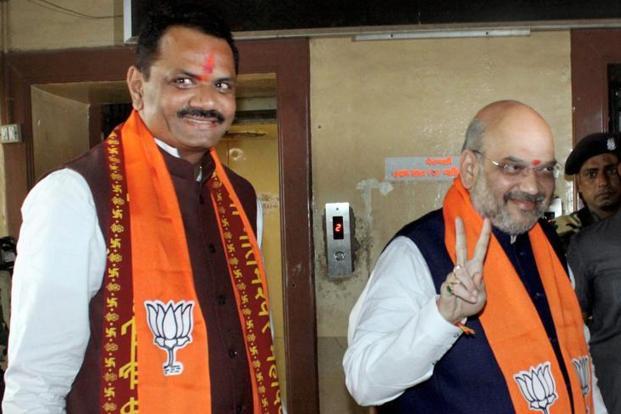 In some of the seats that the BJP has won in rural Saurashtra, it could merely scrape through – and the victory also looks like defeat when one looks at the stature of candidate.

Dholka, where the BJP had fielded Bhupendrasinh Chudasma once again, was won by this heavyweight with a margin of only 327 votes. In the last election, Chudasma had won this seat comfortably by the margin of 18,845 votes.

Botad, where BJP changed its candidate this time and brought in Saurabh Patel (Dalal), it won by a margin of merely 906 votes. BJP had won this seat by a margin of 10,005 votes in 2012.

Similarly, in Gariadhar, where BJP had fielded Keshubhai Hirjibhai Nakrani once again, the candidate could scrape through with a margin of only 1,876 votes. In the last election, Nakrani had won comfortably by a margin of 16,028 votes.

Look at Porbandar, where Babubhai Bokhiriya might have defeated a Congress stalwart, Arjun Modhwadhiya, but the fact remains that his victory margin has plummeted from 17,146 in 2012 to 1,855 in 2017.

Another constituency worth commenting on is Mahuva (Saurashtra). Here the saffron party failed badly. Raghavbhai Makwana won against independent candidate Kanubhai V. Kalsariya (someone who is known for his anti-displacement agitation against the Nirma cement plant) by a thin margin of 5,009 votes. In the last election, the BJP had won comfortably here by a margin of 28,532 votes. The contest on this seat became tri-polar as Kalsariya is very popular here, given his work as an activist. In hindsight, it seems if the Congress had acted wiser and not fielded a candidate, Kalsariya would have easily won.

In sum, the BJP may put up a brave face, but across many constituencies in the region, it has fared badly. In stark contrast is the improvement in the performance of Congress candidates, who retained their seats in Saurashtra with increased margins. For example, Jawaharbhai Chavda, who retained his Manavadar seat with a margin of 29,763 votes, had won by only 4,402 votes in 2012. In the Talala constituency, the Congress candidate won by a margin of 31,730 votes, whereas in 2012, the party had won this seat by a mere 1,478 votes.

Dhari constituency was a keenly-contested seat in 2012, giving the Gujarat Parivartan Party one of its only two seats. This time, Congress’s V.J. Kakadiya defeated BJP stalwart Dilip Sanghani here by a margin of 15,336 votes. Similarly, who would have thought that the BJP would lose Khambhaliya, where Poonamben Madam had won in 2012 by a margin of 38,382 votes. Congress won this seat with a margin of 11,046 votes this time.

However, the anger that the BJP faced in Saurashtra doesn’t seem to have travelled to neighbouring Kutch, down south, up north or to central Gujarat. However, one also shouldn’t forget to ask BJP spokespersons: if there was a Modi wave of the nature that the nation witnessed in 2014, why didn’t it improve its tally in these regions as well?

What Saurashtra tells us is that it is rural agrarian distress that has taken the wind out of the Modi juggernaut in the region. The Bharatiya Kisan Sangh can perhaps stand up and explain this spectacular losses from Saurashtra. Patidar discontent might have played a role, but it would be insufficient to read it merely as that.

Will the Union Budget and Gujarat budget next year offer some relief to farmers in distress, or will we see more of the ‘business as usual’ rhetoric from Modi? We will know soon.