Crisis in Rural Economy Has Spurred the Feminisation of Indian Agriculture

A growing number of men are moving from the hinterland to cities in search of a living, leaving women with farm responsibilities. Reversing this trend is important, for stable families hold the key to social stability in the nation. 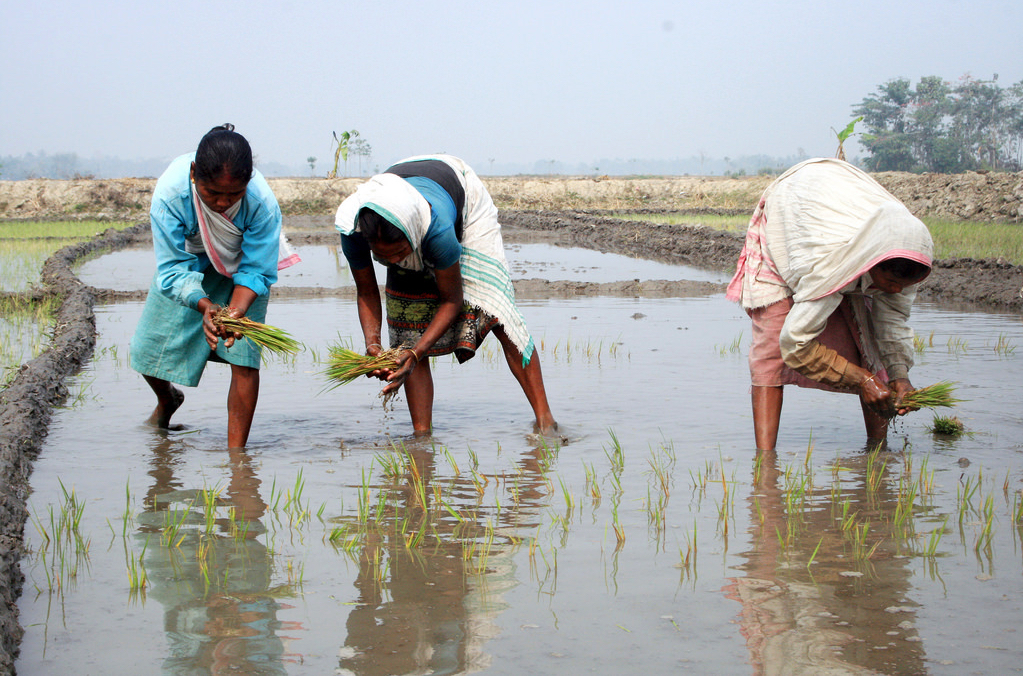 Tribal women are seen sowing rice crops in an agricultural field in the outskirt of Nagaon Town in Assam. Credit: Flickr/Diganta Talukdar

Is it surprising to know that on any given day, the people working India’s hundreds of thousands of family farms are mostly women? Some older folks and children are also seen in the fields, but there is an acute shortage of younger men in India’s hinterland.

Driven by a creeping crisis in agriculture, rural men have sought work in the millions in India’s cities. Working as construction labourers, lorry loaders, parking attendants, security guards, rickshaw pullers, domestic servants and street vendors, they earn the pittances that are necessary to hold the village family together. But while it provides them with these small sources of income, the city does not lay out a welcome mat for low-paid rural workers. Most men who come in from villages to work in India’s cities survive in pitiful conditions, living in crude shacks or ten to a room in rented tenements. There is no secure place to live nor a steady job for the vast majority. The only realistic option is to leave the family behind in the village – where the next generation of mazdoors is raised by de facto female-headed families.

Official statistics severely under-report the number of rural-to-urban migrants in India, but unofficial estimates put this number at anywhere from 100 to 200 million people – the combined population of France, Belgium and Germany. Most of them are younger men, separated from their families. Almost as many women are left behind to take care of the farm, the older folks and the children.

Women who had never before stepped out of their village homes are having to deal with new challenges of getting Aadhaar cards made, rations issued and hospital visits, of dealing with officials in distant places. Most of these women have very little education. In addition to undertaking what has traditionally been men’s work, they are also responsible for what are regarded as women’s duties – a double burden.

This hollowing out of rural areas, the un-manning of agriculture, has been brought about by a steadily deepening crisis in household economies. More than two-thirds of the average farm family’s income was constituted by agriculture in the 1980s, but today this share is closer to 30%. Meanwhile new needs have arisen, especially in education and healthcare.

The way in which the average rural family has been dealing with this situation is by sending its young adults, especially men, to make extra money by labouring in the cities, where the economy is booming. Life isn’t easy for these men or for their families that are left-behind. But there isn’t any other realistic option.

Relatively few of the rural men, less than one-third according to some estimates, who migrate in search of work are able to acquire a regular position in cities. The rest are short or medium-term migrants, who stay for a few weeks or months at a time, returning to their villages, most often, at the times of sowing and harvesting. In the interim, all other agricultural activities, including intercropping, weeding, fertilising, watering and raising animals are left to the women.

Few young men growing up in villages express any interest in a farming life. More and more, agriculture is coming to be seen as women’s work, abhorred and abjured by young men of the village, especially those who have acquired more than a few years of education. They, too, join the growing stream of migrants to cities near and far, their wives handling the homestead and almost single-handedly rearing the children.

The problem, of course, is a severe lack of economic opportunities in rural areas, for if a decent job was to be had in or near one’s village, then why would a young man abandon the security of his home in exchange for a hovel in the city? But decent jobs are few and far between, especially in rural areas.

The city-centric nature of India’s growth has led to this situation in which rural families have been broken apart, with the men becoming itinerant migrants and the women becoming the family heads and the agriculturists. But even in the cities, the jobs that are available to most rural migrants are of an irregular and low-paid nature. Certainly, the number of software engineers – epitomising India’s growth story – has quintupled, increasing from 28,000 to 160,000 between 1993 and 2005, but the number of these good jobs is dwarfed by the number of low-paid and informal workers. Over the same period, the number of construction workers, mostly informally employed mazdoors, skyrocketed from 5.4 million to 13.3 million, constituted in most part by the stream of distress-driven rural workers.

Reversing this trend is important, for stable families hold the key to social stability in the nation. The country’s future needs to be envisaged as comprising not just Mumbai, Bengaluru and New Delhi, but also its more than five lakh villages, creating better jobs and higher-quality infrastructure in rural India. An army of tens of millions of rootless men in cities, accompanied by an equal-sized army of women left behind in villages, does not provide the basis of a secure and stable future for the nation. Building better amenities in villages is necessary for making shining India a truer picture of the lives of its village people.

Anirudh Krishna, Edgar T. Thompson professor of public policy and political science at Duke University, is the author, most recently, of The Broken Ladder: The Paradox and Potential of India’s One-Billion (Penguin 2017).