For both farmer and rural wage worker households, income from animal husbandry has a significant share in their total income. As such, rising wheat straw prices have hit them the hardest. 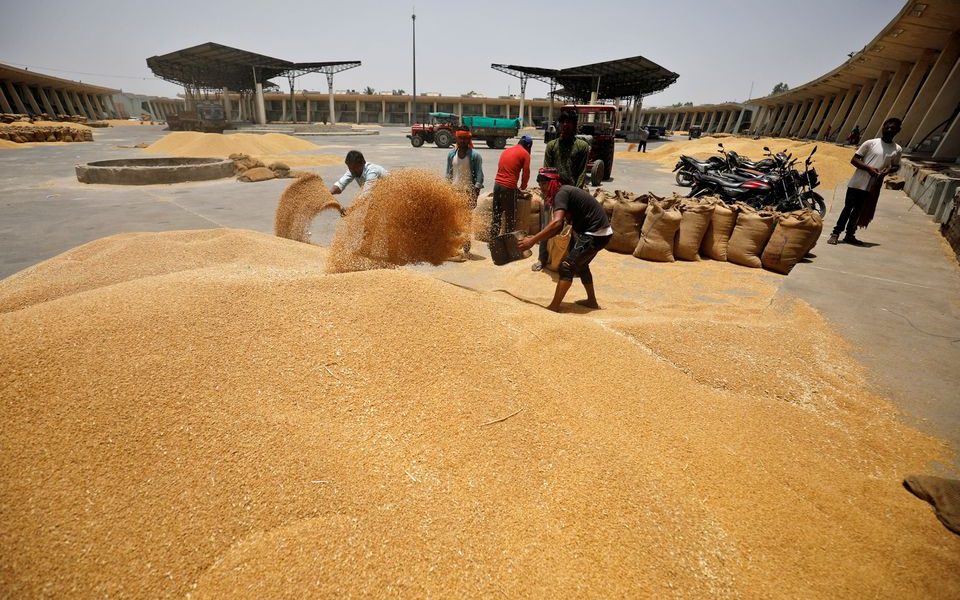 Workers fill sacks with wheat at the market yard of the Agriculture Product Marketing Committee (APMC) on the outskirts of Ahmedabad, India, May 16, 2022. Photo: Reuters/Amit Dave

In a recent meeting. the Goods and Services Tax (GST) council decided to impose 5% GST on milk and other milk products. This decision has led to protests by dairy farmers in different parts of the country.

The tax has been imposed even as the cost of rearing animals has increased enormously in the recent past, due to a rise in the cost of dry and green fodder, along with a price rise in animal feed.

This article looks at the reasons for the increase in wheat straw prices and its impact on animal rearing income.

For both farmer and rural wage worker households, income from animal husbandry has a significant share in their total income.

The contribution of animal husbandry in the total net receipt (after deducting the paid out cost) was 15% for farmer households. For small and marginal farmers, animal husbandry accounts for 15-16% of their net incomes. A significant share of these small and marginal farmer, and also rural manual workers (net buyers of straw), purchase wheat straw from large farmers.

In our survey of a Punjab village during March-April 2022, we found that due to the heat wave, the production of wheat witnessed a decline. Consequently, the yield of wheat straw also diminished, by 25% (from about 12 quintals per acre to 9-10 quintals per acre). This reduction was sharp.

Also read: How Well Do You Know Your Heatwave? A Study of India Data

Uses of wheat straw in power sectors and brick kilns

With the removal of restrictions on private sector intervention in the coal sector since 2020 (with the promulgation of the Mineral Laws (Amendment) Ordinance, 2020) the price of coal has been rising. This has led to a decline in coal use for power plants and brick kilns. In our surveyed village, approximately 20% of the total wheat straw was purchased by power producers.

Increase in the prices and rural households

Taking into account imputed and paid out costs, income from animal rearing per household was merely Rs 441 per month, as per the SAS report, even as the NSS data under-reports costs. In many states, this income was, in fact, negative; animal rearing has become unviable.

Also read: What the Latest NSS Survey Tells us About the State of Farmers in India

Given that animal rearing is a significant source of income for small and marginal farmers, as well as rural wage workers, the government needs to focus on alternative policies to deal with the adverse consequences of the rise in wheat straw prices. This has come over-and-above a fall in real wages.

A number of policy steps are required to deal with this crisis. First, the state should provide subsidies on animal feed to reduce the cost of animal rearing. Second, a Fair and Remunerative Price (FRP) for milk needs to be provided to dairy farmers. Third, alternative techniques that are relatively more ecologically could be promoted in both power generation and the production of bricks. Fourth, incomes of small and marginal farmers (and wage workers) could be enhanced by the provision of both, additional days of employment and higher wages under the Mahatma Gandhi National Rural Employment Guarantee Scheme (MGNREGS).

Navpreet Kaur teaches economics at JDMC, University of Delhi. She is grateful to Professor S. Saratchand for his comments and critical interventions on a previous version.