Farmers in Suratgarh protesting outside the electricity department for providing power supply during the day in winters, instead of at night. Photo: Shruti Jain

Jaipur: Hundreds of Kisan Credit Card (KCC)-holding farmers in Rajasthan’s Sri Ganganagar district are struggling to receive their insurance claims under the Pradhan Mantri Fasal Bima Yojana (PMFBY) for the year 2019, because the Bank of Baroda has reportedly wrongly fed their land details in the insurance policy.

Rakesh Kumar, a farmer in Sri Ganganagar’s Suratgarh tehsil, has a field in Kaunpalsar village. This is confirmed by his land record details certified by the tehsildar. 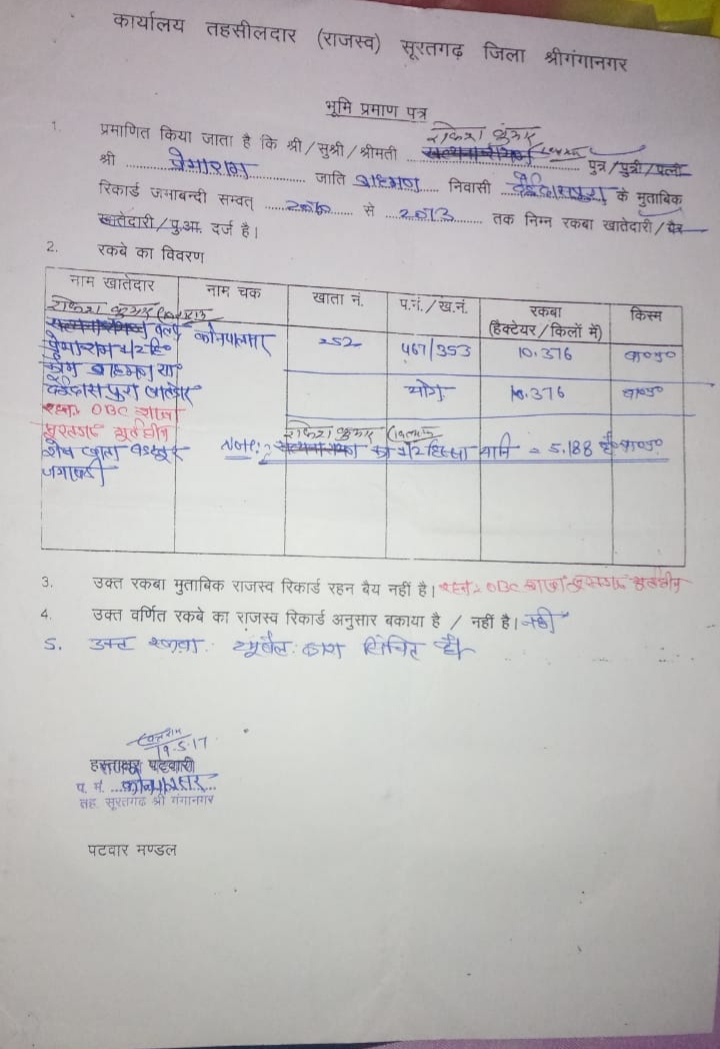 Due to these changes, Kumar is not able to receive the insurance claims he would have been otherwise entitled to. He believes that the bank deliberately made changes to farmers’ insurance policies so that insurance companies are no longer liable to pay the compensation, and can maximise their profit. 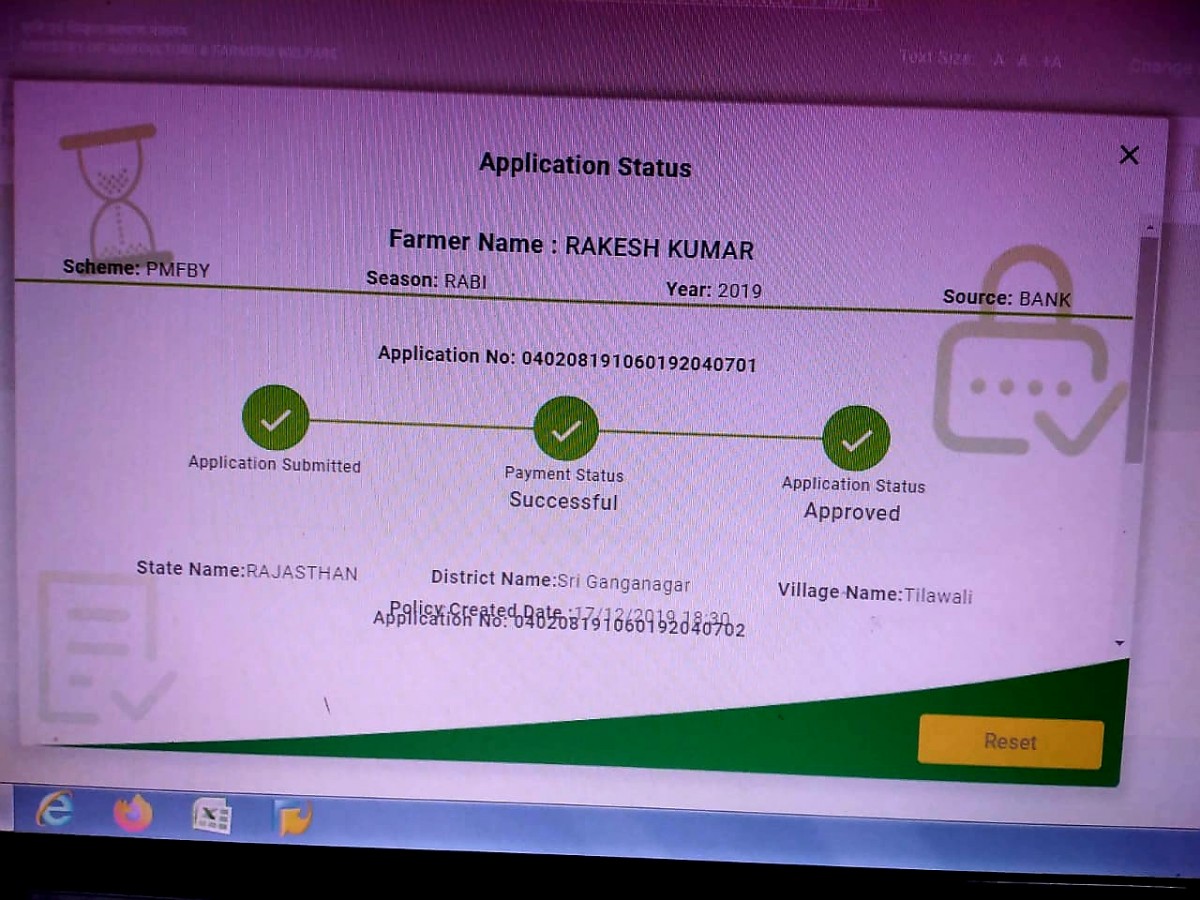 For rabi 2019, Kumar’s land was shown in Tilawali village in the PMFBY insurance policy, instead of Kaunpalsar village. Photo: Shruti Jain

He says that the bank is claiming the farmers’ land lies in a well-irrigated area where the output is usually good and compensation disbursed for yield losses is minuscule.

“Our land is in a tubewell-irrigated area, while that village [which the bank had wrongly mentioned] is in a canal-irrigated area which usually has better productivity,” Kumar tells The Wire. 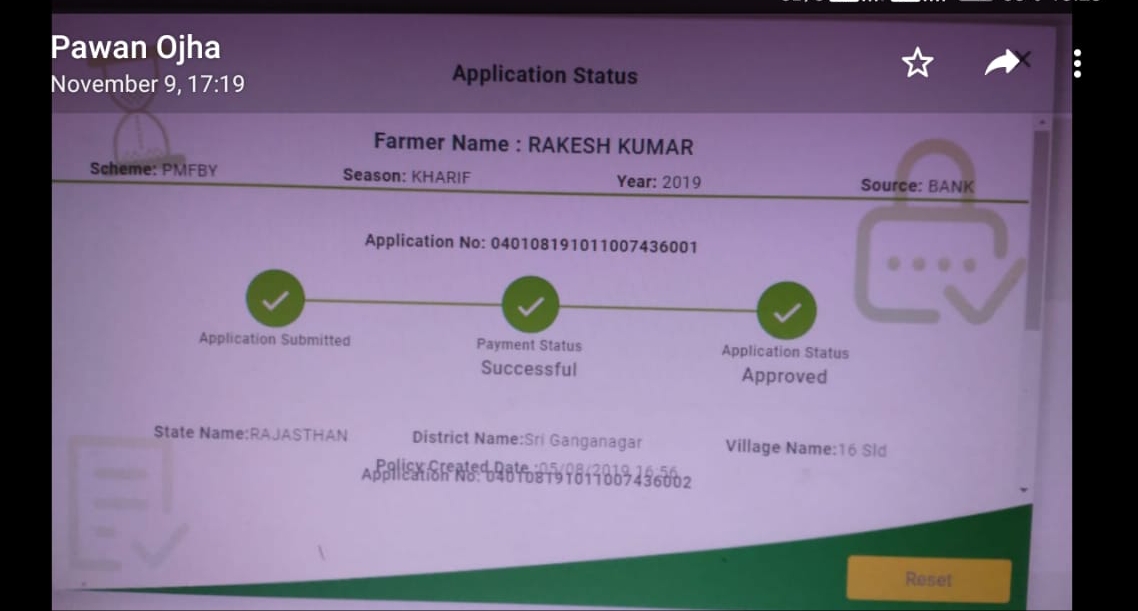 For kharif 2019, Rakesh Kumar’s land was shown to be in 16 Sld village in the PMFBY insurance policy, instead of Kaunpalsar village. Photo: Shruti Jain

In a tubewell-irrigated area, farmers face several issues, particularly odd hours of water supply and the erratic supply of electricity. This affects their yield and causes losses, which they expect to be covered under the insurance scheme.

Kumar says as soon as the winter sets in, the fixed six-hour power supply to the farmers is scheduled between 9 pm and 3 am, making it extremely difficult for them to irrigate their fields.

Most of the farmers in Suratgarh tehsil irrigate their fields through drip-irrigation systems, using water from the tubewells. In this system, a network of pipes, with holes that enable water to drip onto the crop, is laid across a particular portion of a field for a few hours, and then shifted to a new portion, gradually irrigating the entire field over a week or more.

“In my field, I use 35 pipes,” says Kumar. “At 9 pm, I lay the pipes from the north of the field to the centre. After two hours, at 11 pm, I shift the pipes to the east, then to the south for the remaining two hours of the supply.”

The farmers have to be extremely careful about how long each crop is irrigated for. Both excess and deficit irrigation can damage the crops and ultimately affect their income.

“Between shifting the pipes in the bitter cold, we have to take care of any leakage from the pipes or any tripping, which means a farmer has to constantly move across the field while irrigating,” he adds.

The farmers in Suratgarh say that they protest before the electricity department every week, demanding change of the power supply hours.

“We are also humans, how do we manage in the winters?” says Shishupal, a farmer in Suratgarh who leads these protest. “After they [the department] see that our protest has a good gathering, the timings are changed but after two days, again, the timings are back to the usual night shift.”

Unlike tubewell irrigation, in canal irrigation, the farmers don’t have to put in much efforts. The canal water runs directly into the field through ditches created.

Despite the issues faced in tubewell irrigation, instead of providing a sound irrigation system, the farmers’ land details were manipulated in their insurance records, to make it look like they farmed a canal irrigated area.

The bank authorities say that the error occurred due to “some issues in the system”.

Speaking to The Wire, Bank of Baroda’s field manager in Suratgarh Kalu Ram said, “There was some issues in the system last year. As we fed the Aadhaar details of farmers, it automatically took entries from the previous year which caused a mismatch.”

“The system has now been put into manual mode, and there will be no scope for such a problem,” he added.

The PMFBY portal reportedly has several issues and the repercussions are borne by the farmers.

“The portal don’t show the names of several villages or the patwar mandal in the drop box because of which the farmers are not insured for the actual location of their land,” a senior agriculture department official told The Wire on the condition of anonymity.

This is not the first time that the banks have deprived farmers of the benefits of the crop insurance scheme.

In September 2018, approximately 3,052 KCC-holding farmers of Ramgarh Ujjalwas, Gorkhana and Bhukarka villages in Rajasthan’s Hanumangarh district were denied insurance claims under the PMFBY because the State Bank of India had failed to credit the debited premium of farmers to the account of the insurance company – Bajaj Allianz.

The SBI’s Ramgarh Ujjalwas branch transferred the premium to the account of the Agriculture Insurance Company of India (AIC) instead. When the company returned the money, the deadline for payment had already passed. The other two branches – Bhukarka and Gorkhana – on the other hand, made no attempts to pay the premium.

In April 2019, approximately 135 KCC-holding farmers in Nohar tehsil of Rajasthan’s Hanumangarh district were denied insurance claims under the PMFBY for kharif 2017, apparently because Axis Bank debited insurance premiums for cotton crops – which they had not cultivated but have higher premium rates.