Farmers of Nindar village on the outskirts of Jaipur are protesting against the acquisition of over 1,300 bighas of land for a housing project without fair compensation. 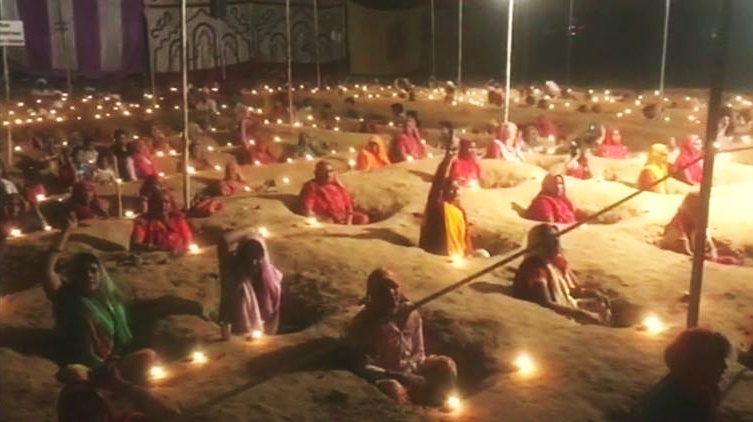 Jaipur: About 650 women, who have buried themselves neck-deep in the ground to oppose the Jaipur Development Authority’s (JDA) move to acquire land in their village, marked Diwali and performed puja at the demonstration site, continuing their protest against the Rajasthan government.

The farmers of Nindar village, that is located on the outskirts of Jaipur, are protesting against the acquisition of over 1,300 bighas of land for a housing project claiming that the compensation offered was not enough.

Their demonstration entered its 19th day on Friday as over 1,000 protesters celebrated Diwali and performed Govardhan puja at the protest site.

The protesting women performed Govardhan puja at the protest site to show their solidarity against the government’s move to acquire farmers’ land against their will, Nagendra Singh Shekhawat, a leader of the Nindar Bachao Yuva Kisan Sangarsh Samiti, said.

He said that talks with the government have not been held in the last couple of days due to which more number of protesters have joined the movement and are on a fast.

The JDA has taken possession of 600 bighas of land so far and deposited Rs 60 crore in a local court as compensation for it after villagers refused to accept the amount, claiming it did not hold up to the prevailing market rates.

Around 10,000 houses will be built under the scheme announced in January 2011.

The opposition Congress had accused the government of failing to reach out to the farmers’ families protesting at the site for 19 days against the JDA’s decision to acquire their land.

State Congress chief Sachin Pilot had said that at the time of festival season, men and women have buried themselves in pits as a mark of protest and the government was unable to resolve their problems. “The government should reach out to the protesters and amicably resolve their issues,” he had said.