Three branches of SBI in Hanumangarh district credited the premium a year later to the farmers' accounts, instead of insurance claim. While one branch had paid the premium to the wrong bank, two others made no efforts to pay it at all. 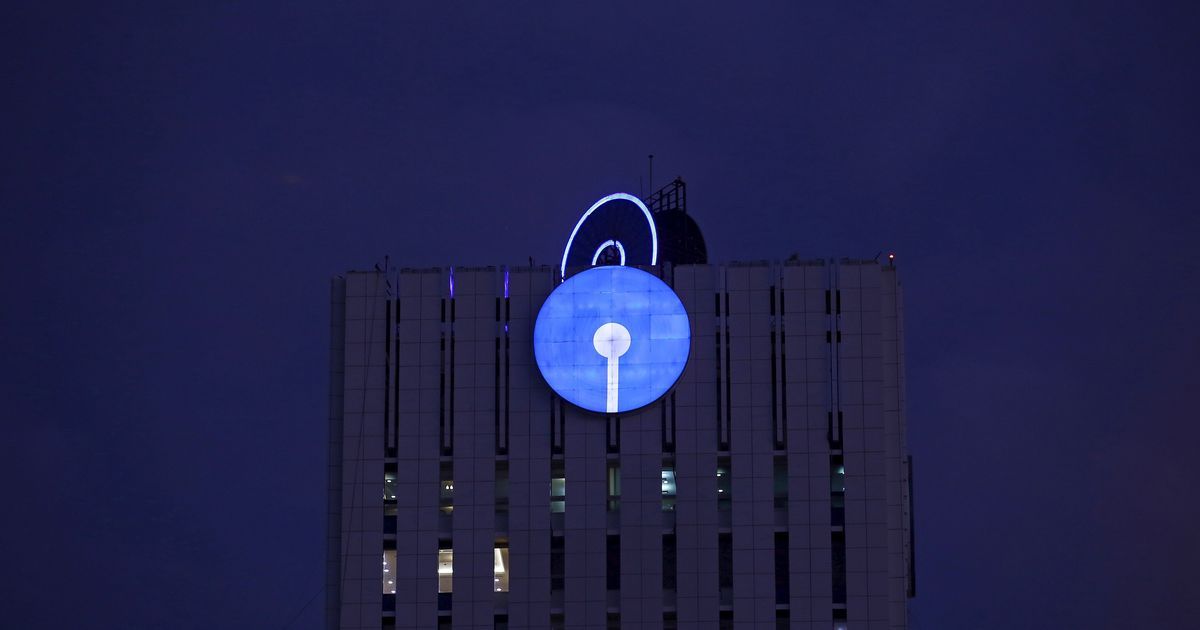 The insurance company was not credit by the SBI. Representative image. Credit: Reuters

The SBI’s Ramgarh Ujjalwas branch transferred the insurance premium to Agriculture Insurance Company of India limited’s (AIC) bank account instead of Bajaj Allianz and when AIC returned, the deadline for payment had already expired. The other two branches – Bhukarka and Gorkhana – made no attempt to pay the premium.

Speaking to The Wire, Mukesh Kumar, manager of the SBI’s Ramgarh Ujjalwas branch accepted that the premium to the insurance company couldn’t be paid on time. “Due to work overload, the insurance premium was mistakenly transferred to AIC instead of Bajaj Allianz. When we realised our mistake, we made the payment to the correct company, but they didn’t accept it as it was late by ten days.”

Interestingly, after the Crop Cutting Experiments (CCEs) data for Kharif 2017 revealed that the district has suffered yield losses and is eligible for insurance cover available under Prime Minister Fasal Bima Yojana (PMFBY), these SBI branches credited the farmers’ account with the PMFBY premium it had deducted earlier instead of the claim amount.

Kheta Ram, a KCC-holding farmer from the Ramgarh SBI branch who had sought a crop loan of about 10.70 lakh to plant guar and cotton (narma) on his five hectares of land in Kharif 2017 season was credited his premium back after his crop yield recorded a loss.

As per Kheta Ram’s pass book accessed by The Wire, Rs 302.40 that was deducted from his account as PMFBY premium was credited back to his account as insurance claim on June 28 this year.

When the matter came to light, the farmers staged a 36-day-long protest in July under the leadership of Balwan Poonia, district president of the All India Kisan Sabha, to compel the bank to pay the insurance claim to the farmers.

“During our 36-day-long protest, we made sure that the bank should pay some token amount to the affected farmers so that it won’t be able to go for an appeal. Had it gone to appeal, the matter would have hung for months,” Poonia told The Wire. 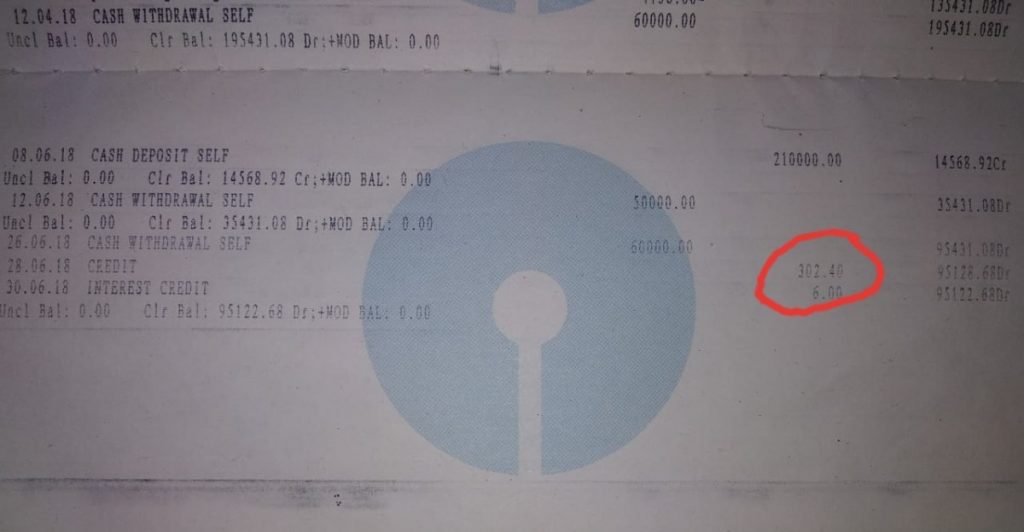 Kheta Ram’s passbook. He was credited a premium of Rs 302.40 instead of his claim. Credit: Special arrangement

On August 20, the bank agreed to pay the claims to the farmers, which is under process currently. However, the calculation of the claim amount is being processed solely by the SBI.

“The bank made the payment to the incorrect insurance company on the last day, which left no scope for correction. Currently, the SBI’s senior management is looking after the claims for these farmers and we have no involvement in their process. At our level, we have ordered the bank to compensate the farmers,” said Balveer Singh Khati, assistant director (agriculture), Hanumnagarh.

Case of negligence or wilful neglect?

For each notified crop in the insurance units, the farmers who have sought crop loan by financial institutions (cooperative banks, cooperative societies, regional rural banks, commercial banks and land development banks), it is mandatory for the banks to insure all the borrowers under the PMFBY scheme. Loanee farmers’ premiums are recovered from their accounts.

On the SBI’s part, delay in paying the premium or making no attempt to pay it to the insurance company point at a bigger issue with the PMFBY guidelines pertaining to premium submission.

As mandated by the Rajasthan government’s notification for Kharif 2017 dated July 31, 2017, the last date for submission of premium in insurance company’s account through RTGS/NEFT was August 31, 2017. Not paying the premium to the insurance company on the scheduled date makes them absolutely free of any liability.

Poonia, who has been working for farmers’ right for more than a decade, said, “The last date for submission of premium to the insurance company is generally in the last week of August, until when the pattern of rainfall could be very well judged to predict if the yield would be a loss or not. When the insurance companies get a fair idea that the crop yield would be adversely affected in an area, they collude with the banks to avoid creation of insurance policies for the farmers.”

Hanumangarh in Rajasthan is a drought-prone area and each year, gets entitled to crop insurance claim, particularly for Kharif season. 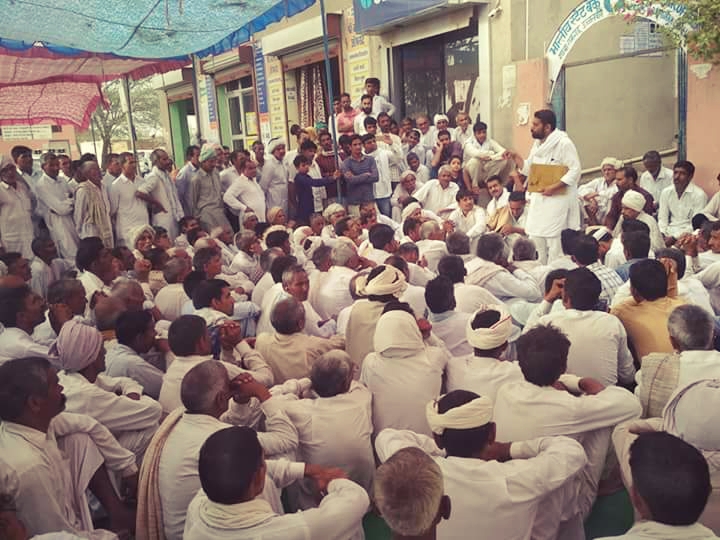 Farmers protested for 36 days to compel the bank to pay the insurance claim to the farmers. Credit: Special arrangement.

“For the past three years, there has virtually been no rainfall in Hanumangarh, particularly in Kharif season. Last year, only 62 mm rainfall was recorded in the area,” told Khati.

However, bank officials say that they face technical glitches while uploading the data to the web portal.

“With limited staff in the banks, the officials are always overloaded with work. Adding to this, the state-government operate website (www.pmfby.rajasthan.gov.in) to which we are supposed to upload the premium details of each farmer availing the crop insurance is not fully functional and doesn’t include many villages in the checkbox option. Also, the server is down most of the time, making it impossible to upload the data on time,” said an SBI official on the condition of anonymity.

The scheme provides insurance cover for various stages of the crop – preventive sowing (insured area is prevented from sowing/ planting due to deficit rainfall or adverse seasonal conditions), mid-season calamity (comprehensive risk insurance to cover yield losses due to non-preventable risks, viz. drought, dry spell, flood, inundation, pests and diseases, landslides, natural fire and lightening, storm, hailstorm, cyclone, typhoon, tempest, hurricane and tornado), post-harvest losses (coverage is available only up to maximum period of two weeks from harvesting of crops which are allowed to dry in cut-and-spread condition in the field after harvesting against specific perils of cyclone and cyclonic rains and unseasonal rains) and identified localised calamities (loss from occurrence of identified localised risks of hailstorm, landslide and inundation affecting isolated farms in the notified area).

The major thrust is on protecting the insured farmers from the yield losses.

At the end of the season, the actual yield of crops is assessed by the state on the basis of crop cutting experiments (CCEs) per insurance unit per notified crop. When the actual yield of the crop in the notified area falls short of the guaranteed/ threshold yield, all insured farmers, in the notified unit, are considered as facing shortfall in yield, and the CCE based yield data is submitted to the insurance company for processing the claims.

CCEs are “crop experiments which consist of identification and marking of experimental plots of a specified size and shape in a selected field on the principle of random sampling, threshing the produce and recording of the harvested produce for determining the percentage recovery of dry grains or the marketable form of the produce” conducted by the ILR’s by the organisations – Directorate of Economics and Statistics, National Sample Survey Organisation and Board of Revenue.

“Crop insurance of the notified crops happens at two levels – patwar and tehsil. As the season begins, we declare various major crops of the season as patwar notified and tehsil notified. At the stage of harvest, four CCEs are conducted at patwar level and 16 CCEs at tehsil level to deduce the actual yield of the notified crops. If the deduced actual yield falls short of the threshold yield (taken as average yield of past seven years excluding the two calamity years), the compensation is paid as per the indemnity level only for yield difference between the actual and threshold yield,” Mukesh Kumar Mathur, joint director, crop insurance at Pant Krishi Bhawan, Jaipur told The Wire.