It is impossible for farmers to register online for government procurement. Instead, they have to attempt to sell their produce at mandis. Jaipur: After the Ministry of Home Affairs said that agricultural activities would continue during the lockdown period, the Indian Council for Agricultural Research (ICAR) issued a national advisory enumerating precautions that farmers must take while harvesting, threshing, storage and marketing produce.

Despite this, states like Rajasthan have not taken up any effort to initiate procurement operations.

In Rajasthan, E-mitra, an e-governance service platform, has been suspended amid the lockdown, making it impossible for farmers to begin registering themselves for the procurement process.

Registration is must if a farmer wants his or her produce to be procured by government agencies at the Minimum Support Price (MSP). It involves submission of a farmer’s personal information and land details in a pre-designed form on the co-operative department’s portal. While the government e-procurement operations are shut, farmers are now eyeing procurement at the mandis operated by the state government.

At these mandis, the farmers sell their produce to wholesalers at the price decided by them with the help of brokers and agents. The wholesalers then sell it to the mills and retailers, who in turn sell to the consumers.

However, mandis across Rajasthan and several other states have decided to put procurement on hold until April 20.

Farmers, who in the absence of proper storage facilities would sell their produce right after harvest at throwaway prices, are now left with no option other than to make arrangement for storage at their houses.

The farmers say it is impossible to store produce at home because it will still be at risk from rats, rain or storm.

“We can still manage to store mustard and barley which are already being harvested, because we usually produce 40-50 quintals of these crops but once harvesting for wheat is over, the farmers would not be able to store the produce at home because even a small farmer grows about 100-200 quintals of wheat and this production only increases as the size of farm increases,” Ram Kumar, a farmer in Rajasthan’s Rawatsar, told The Wire.

What about other crops that are not usually procured?

In most parts of Rajasthan, it is usually mustard, gram and wheat crops that have already been harvested.

Without adequate means for storage, the farmers are selling their surplus produce to retail shops in their nearby areas which is fetching them a price below the MSP.

Speaking to The Wire, Siraj Hussain, former Union secretary of agriculture and farmers’ welfare said, “The purchase rate of wheat is still close to the MSP but for other crops like mustard and gram which are not usually procured by Food Corporation of India, they are already being sold below MSP. If the state would not intervene, farmers would suffer a major setback.” 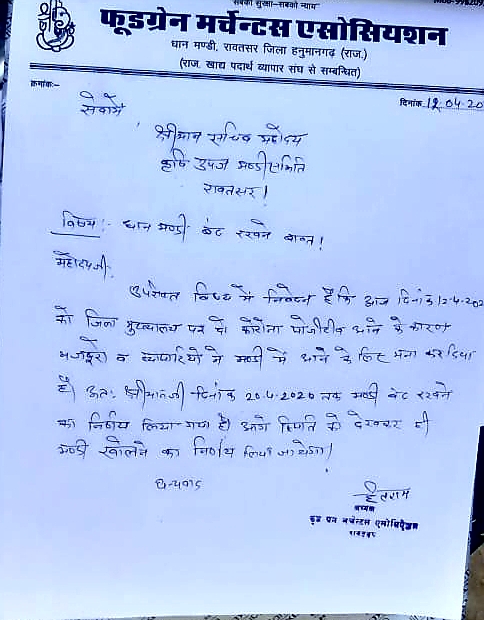 Letter issued by Rawatsar mandi to shut its procurement operations until April 20.

Can procurement and social distancing go hand in hand?

Even if it is assumed that the procurement would begin April 20 onwards, the question still remains as to how social distancing would be maintained in the whole procurement process.

“During the procurement at the mandis, it is difficult to avoid farmers and buyers coming in contact with each other but having said that, the government must try to make arrangements for procurement while maintaining social distancing,”said Hussain.

Usually, the farmers carry their produce to the Mandis in trollies and submit them to the shop of their choice. This is usually the one that had agreed to lend them money in advance to meet farm expenses.

After this, produce is graded. The Agricultural Produce (Grading and Marking) Act, 1937 provide for grading and marking of agricultural produce, to ascertain its quality in terms of weight, shape, colour, texture, moisture content, stage of maturity and presence of disease or physical deformity.

Grading is the most essential part of the procurement operation because without proper grading, farmers fail to fetch a good price for their produce. 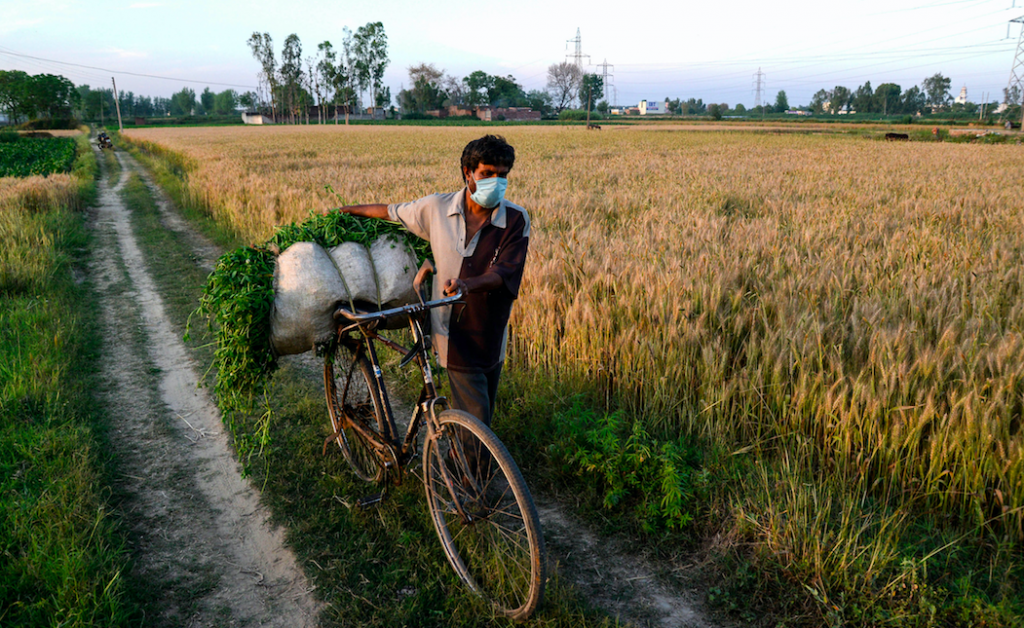 “Grading is not a standalone operation, it needs at least one person if the crop amount is 10 quintals or less and four to five persons if the amount is 500 quintals and above. One person loads the produce to the blower machine, second person rotates it, third person shifts the grains and the four person collects it after the grains are separated,” said Anil Karwasara, a buyer in Hanumangarh.

After grading is completed, buyers bid for the produce of every farmer. The highest bidder, consequently, purchases it.

The shop owner informs the farmer about the bid rate and if he agrees to it, the deal is locked.

All farmers keep their produce in heaps outside shops at the mandi. Bidders, who come from outside the mandi as well as the shop owners at the mandi, stand close together for the auction.

“Since the Mandi area is not big enough to accommodate hundreds of farmers, the heaps are placed very closely. Sometimes, the farmers have to separate two heaps by using a tarpaulin,” another buyer added.

Buyers take the help of labourers called ‘palledars‘, who put the produce in gunny bags and stitch them. The buyer, then, transports the purchased produce to different cities within the state or outside.

Ganganagar starts a mandi as a pilot case

In Rajasthan, a mandi in Ganganagar district has opened for procurement as a pilot case to test if social distancing is possible during the process.

D.L. Kalwa, joint director, marketing in Hanumangarh and Ganganagar explains how the mandi in Ganganagar is carrying out procurement in a controlled manner. “There are about 300 shops in the Mandi. We don’t allow all of them to open on the same day,” Kalwa told The Wire.

However, this well-intentioned system of procurement while maintaining social distance is facing a lot of trouble on the ground.

“Since we are not calling all the buyers at once, many buyers are upset with us because they are not able to join the procurement bidding. They tell us that we are doing partiality against them,” Vinay Jindal at the Ganganagar mandi told The Wire.

He also added that the purchase rate has gone up drastically.

“Rates have gone up because this is the first batch of supply this season and the buyers are well aware of the uncertainty in the procurement. So, whoever is getting the chance to procure is offering high rates because at the end of the supply chain too, that is, the consumer side, the rates are high,” Jindal added.

Gunny bags are most essential for storage of grains in the warehouse. Before each Rabi and Kharif season, under the guidelines of the Ministry of Textile, government agencies purchase gunny bags for packaging of food grains, after assessing the month-wise requirement.

After assessment, supply orders are issued directing manufacturers to produce bags of specified quality and quantity. They could also be purchased through open tender.

Various buyers in Rajasthan have flagged at least 2.5 times rise in cost of gunny bags while hinting at possible shortage of supply.

“I was planning to purchase produce from Ganganagar, so I went to purchase gunny bags and found that the rates have gone up to Rs 17 -18 for a bag that was available at a fixed rate of Rs 7,” said Subhash Agarwal, a buyer in Rajasthan.