Though there is no road map to reduce the production of wheat and rice, it is now possible to reduce India's dependence on Punjab and Haryana for food security by procuring from non-traditional states.

Since the enactment of three agriculture legislations by the Centre in September, sections of the media have rightly or wrongly projected Punjab, and to a much lesser extent Haryana, as a villain.

This has led many to believe that Punjab farmers have been exploiting the minimum support price (MSP) procurement mechanism. And it doesn’t help that the state’s stubble burning is now seen as the primary contributor to Delhi’s pollution, while other factors are seen as only minor irritants.

It is ironic that Punjab’s success in increasing its production and productivity of wheat and rice and setting up a smooth procurement ecosystem is being increasingly ignored in favour of other political narratives. At the height of the COVID-19 induced lockdown and restrictions, Punjab showed light by procuring 127.14 lakh tonne (LMT) of wheat in April and May 2020.

The main reason, however, for Punjab’s diminishing importance for India’s food security is the setting up of robust procurement machinery in Madhya Pradesh (wheat) and Odisha, Chhattisgarh, Andhra Pradesh, Telangana, Tamil Nadu and West Bengal (rice).

At the height of the global food crisis in 2007-08, wheat procurement in India was 111.2 LMT only. At the time, India’s Union food secretary had to travel to states to plead with them to procure more so that wheat import could be kept to a minimum. MP procured just 57,000 MT and UP’s contribution was a minuscule 54,000 MT. Punjab and Haryana contributed 67.8 LMT (61%) and 33.5 LMT (30%) of wheat respectively.

Also Read: Punjab’s Challenge to the Centre Shows the Limitations of MSP As Agriculture Policy

Since then, several states have performed admirably in putting into place efficient procurement machinery. In KMS 2019-20, Chhattisgarh procured 52.2 LMT of rice while Odisha contributed 47.6 LMT.

This massive increase in procurement in non-traditional states was prompted by the decision of the National Development Council in 2007 to approve the launch of the National Food Security Mission with the objective of producing an additional 25 MMT of food grains. This included 10 MMT of rice, 8 MMT of wheat, 4 MMT of pulses and 3 MMT of coarse cereals. This was to be achieved by the end of the 12th Five Year Plan in March 2017.

The state governments of MP, Odisha and Chhattisgarh ramped up their procurement operations by involving co-operatives, setting up a computerised database of farmers and paying the MSP directly into their bank accounts.

UP has been an inconsistent performer in wheat procurement. In 2018-19, it procured 53 LMT but this year it has procured only 35.77 LMT.

Newspaper reports suggest that wheat and paddy prices in UP and Bihar are lower than the MSP and therefore, some quantity of wheat produced in these states is reportedly being procured in Punjab and MP. In the ongoing KMS 2020-21, Punjab has procured 132 LMT of rice while its production is estimated to be just 114 LMT. Newspaper reports suggest that paddy is available in neighbouring states at Rs 800-1,000 per quintal while the MSP is Rs 1,888 per quintal.

Since the procurement operations are weak in UP and Bihar, it is not uncommon that traders buy wheat and paddy from farmers at lower rates and in collusion with APMC staff in Punjab and Haryana, it is shown as locally produced and procured at MSP. In Punjab, the state government has closed 4,000 paddy procurement centres in sub-yards. Distress sale is not a new phenomenon in Bihar and only 5,000 tonnes of wheat was procured in the April-June period this year. Rabi maize was sold at 40-50% less than the MSP in Bihar. It seems that the farmers have lost any hope of getting a fair price through procurement at the MSP. It is, therefore, no surprise that in the Lokniti-CSDS post-poll survey, agriculture was not mentioned as even one of the ten important issues in the Bihar assembly elections.

The farmers’ agitation in Punjab is primarily focused on the demand for continued procurement of wheat and paddy at the MSP. Even though the Union Ministry of Food has not issued any written orders confirming that procurement will continue, as in the past, from the APMCs. The Centre has refused to pay a rural development fee of 3% of the MSP in Punjab. 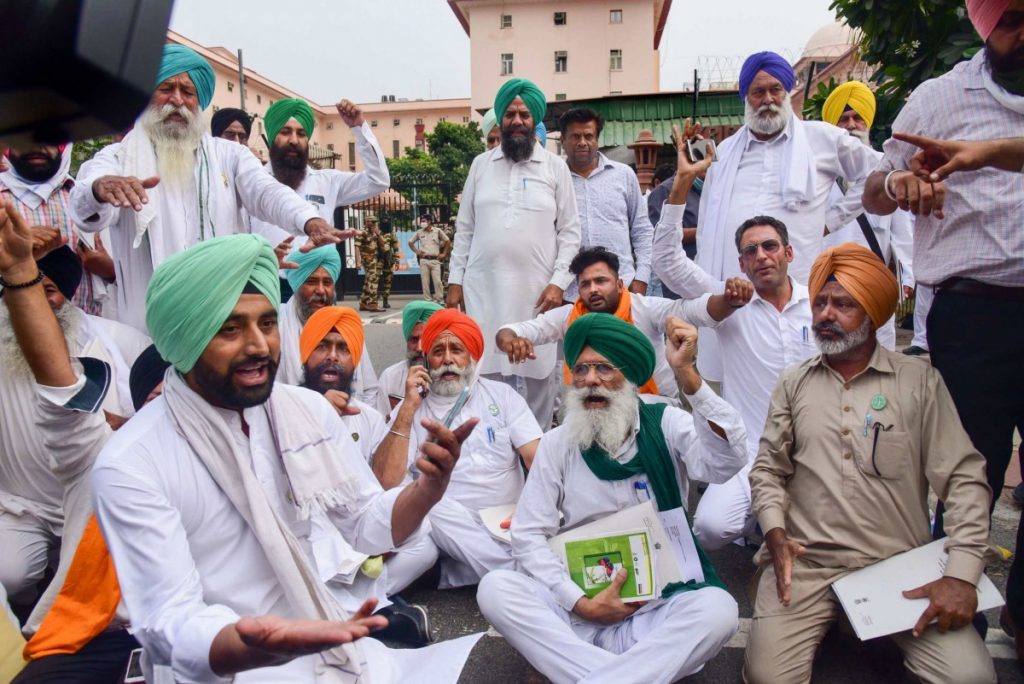 Farmers from Punjab stage a protest outside Krishi Bhawan after they walked out of a meeting with agriculture secretary over the new farm Bills, in New Delhi, October 14, 2020. Photo: PTI

There is a consensus that there is a need to reduce paddy cultivation in water-stressed regions of Punjab, Haryana and western UP but there is no roadmap of how to address this formidable challenge. India has been exporting about 8 million MT of non-basmati rice every year, at a price which is generally lower than comparable Thai rice. The reason is higher than the required production of rice, even in water-stressed regions. Similarly, India has been producing more wheat than required but it cannot be exported as it is not competitive in the export market. As a result, there has been an accumulation of stock with the government.

Though the government has not come out with a road map to reduce the production of wheat and rice, it is now possible to reduce dependence on Punjab and Haryana for food security by procurement from non-traditional states. A ten-year plan indicating the targeted procurement of rice and wheat from each state can reduce uncertainty caused by excessive production and procurement.

An IFPRI study of Indian diets has found that households in the lowest deciles get much lower calories from proteins than recommended. So, there is a strong case to increase the production of protein-rich pulses by giving incentive to farmers to reduce the production of carbohydrate-rich wheat and rice.

The three recently enacted farm legislations – the Farmer’s Produce Trade and Commerce (Promotion and facilitation) Act, 2020, the Farmers (Empowerment and Protection) Agreement on Price Assurance and Farm Services Act, 2020 and the Essential Commodities (Amendment) Act, 2020 are unlikely to achieve the above objective.

Private buyers are not going to rush to Punjab and Haryana to purchase their requirement of wheat and (common) rice. They would much rather buy from states where the MSP mechanism is weak so that they can buy at a much lower price. Unfortunately, even Punjab’s amendment to the Farmer’s Produce Trade and Commerce (Promotion and facilitation) Act, 2020 seeks to only continue the existing MSP induced cropping pattern of wheat and rice.

So, the real solution to the MSP conundrum lies in making the cultivation of protein-rich crops more profitable. This may require direct income support to farmers to switch from wheat and paddy. It may also require direct benefit support to poor households to buy protein-rich pulses from the open market. Despite all the claims of success of Aadhaar, even the poorest households are not identified and their bank accounts are not mapped. As a result, it was not possible to give them money through DBT even during the COVID-19 pandemic.

One of the most effective ways to address protein deficiency in children is through the distribution of eggs under the mid-day meal scheme. There is no reason to force vegetarianism on young children from households where meat-eating is not a taboo.