Researchers have found that small and marginal farmers and Dalit landless labourers are worst affected by the region's agrarian distress. Sangrur/Patiala (Punjab): In the villages of Punjab, strike a conversation on farming  expenses with anyone, and they will say, “Karja tan hai hi (Of course, we have taken loans).” It’s these loans – from both institutional and non-institutional sources – that largely help the rural economy run in the state. But the thin line between one loan and a debt trap is crossed far too often – especially for small and marginal peasants, and Dalit landless agricultural labourers.

Professor of economics at the Punjabi University Patiala, Anupama, who has worked extensively on indebtedness and poverty among agricultural labourers and also published a book on the topic, told The Wire that one of the biggest reasons for high indebtedness in rural Punjab is the increasing gap between income and expenditure. For small and marginal farmers – especially ones from the Malwa region in Punjab – mostly, the only source of income is the agricultural produce sold at the minimum support price (MSP), at the government-regulated markets. But because the produce is usually not procured at the ‘guaranteed’ prices announced, farmers’ tend to face losses.

Anupama also explained that because the current MSP regime doesn’t cover the cost of farm labourers, as suggested by the Swaminathan Commission report, landed farmers end up paying very low wages to agricultural workers. This, in a domino effect, increases agricultural workers’ risks of indebtedness as well.

A survey done in 2017 by her, along with senior economists from Punjab including professor Gian Singh, found that 85.9% of the farming households and roughly 80% of the agricultural labour households are under debt in Punjab.

“We also found that landed farmers finance themselves via loans for productive purposes, for farm machinery or purchase of land,” professor Anupama said sitting in her cabin at the Punjabi University campus in Patiala.

“In the case of agricultural labourers,” she explained, “they obtain loans for domestic purposes. Because their income is so low, even for household needs they have to take loans.” 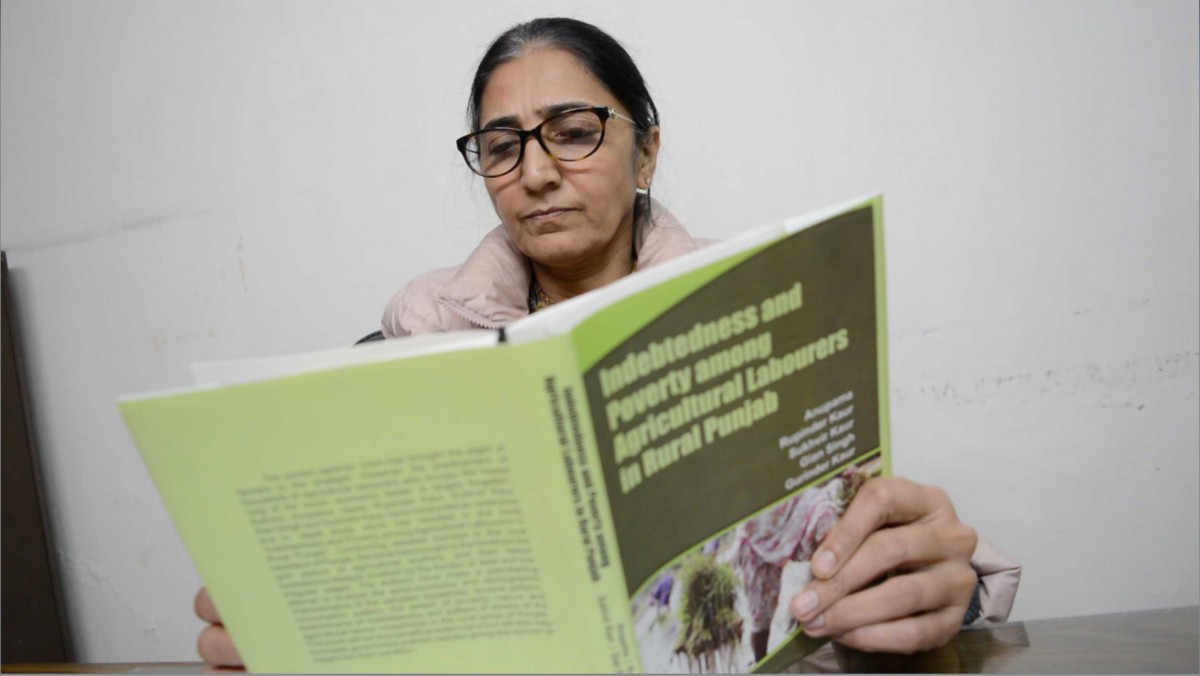 Both Jugraj, a Dalit agricultural labourer, and Jagdev, a Jatt farmer with a land holding of one acre, died by suicide because they couldn’t repay their loans. In Jagdev’s case, the debt was passed down to him from his father, who had also died by suicide years ago. The Wire visited both their villages in the Lehra block of Sangrur district. Jugraj, a Dalit landless labourer, had taken a loan of Rs 3 lakh from local moneylenders in the village. His wife, Baljeet Kaur, said that the loan was taken to construct a new, bigger house. In addition to the loan, an old plot adjacent to the new house was sold for Rs 2 lakh to incur the costs of construction.

“He did not talk to us much. He would also blow one-third of his wages on alcohol. So I got to know about the debt only after he hanged himself one afternoon.” Baljeet talked about her husband’s suicide in a matter-of-fact manner.

She hasn’t been able to pay her daughters’ school fees for ‘a very long time’, she said. Jugraj hanged himself in August this year. His older daughter, 18-year-old Lovepreet Kaur, said, “We have told our teachers that we will pay school fees soon. If not now, then later.” 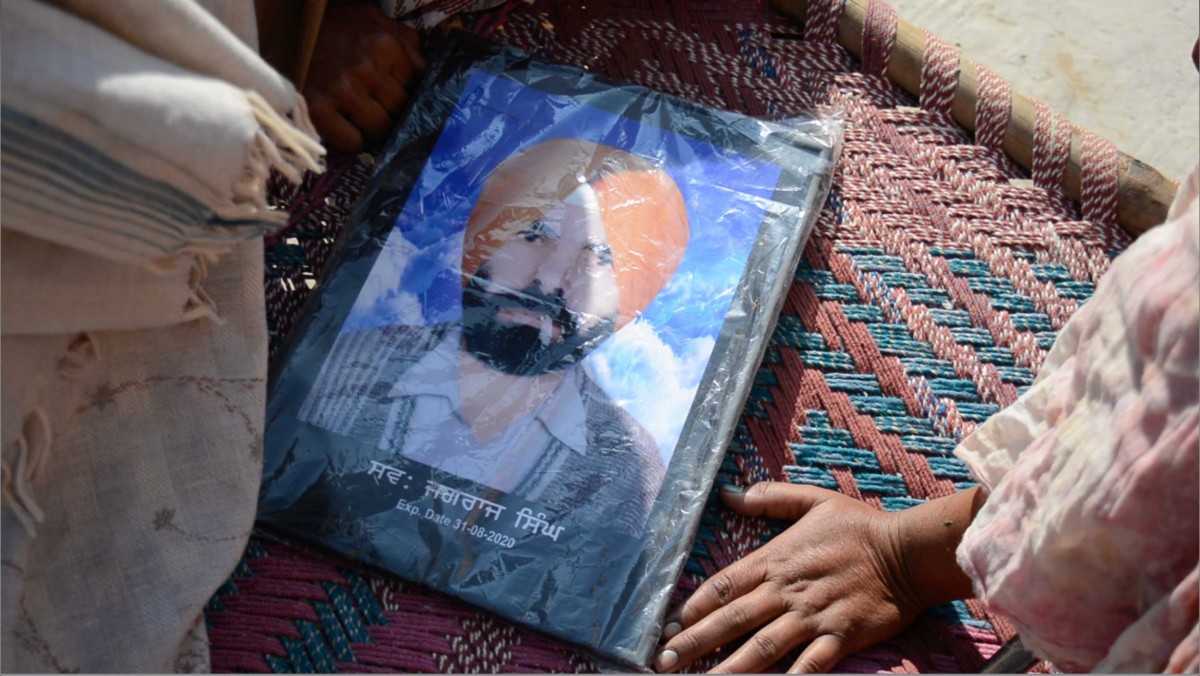 Inderjit Jaijee, a social activist who runs the Baba Nanak Educational Society (BNES), along with his daughter Harman Jaijee, has extensively documented debt-related suicides in the Lehra block, where The Wire met with the two victim families.

Besides documenting the suicides in the area, Jaijee’s NGO has adopted roughly 650 debt-trapped suicide victims’ families in Lehra and Andana blocks of Moonak division in Sangrur to help them financially.

Jugraj’s wife Baljeet will be a beneficiary of Jaijee’s initiative soon. “They (BNES) have said they will help us in all possible ways,” Baljeet said.

In Jawaharwala, Jagdev’s wife Baljinder Kaur said that their one acre land holding is mortgaged to a relative currently. She said that they had taken loan for kheti baadi (farming). “The matter went out of his hands,” Baljinder said, explaining that her husband was under extreme stress to pay off the debt.“We have roughly Rs 7 lakh payable to the bank, and another Rs 50,000 to commission agents,” she said. For the last one year, since her husband’s death, BNES has been helping her with her children’s school fees. 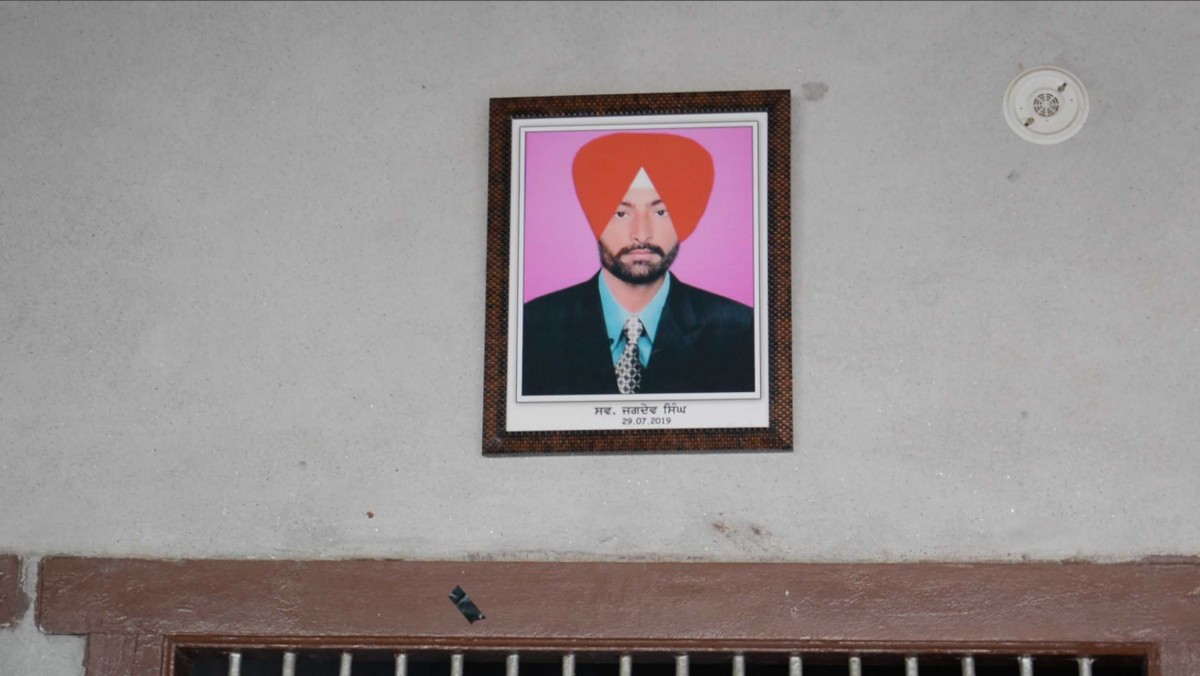 Jaijee and his organisation have documented at least 100 debt-related suicides this year in the Lehra and Andana blocks combined. Jaijee has worked in this field for over three decades. According to his calculations and extrapolation of data from these two blocks, the total number of debt-related suicides in Punjab this year could be hovering around 8,800. He compares this with the wretched villain of 2020 – the coronavirus – and finds that rural suicides (~8,800) are double the COVID-19 deaths recorded in Punjab as of December 2020 (~4,900).

In this context of pervasive debt in Punjab, and suicides related to debt, both professor Anupama and Inderjit Jaijee believe that the new contentious farm laws, which have led to massive protests by farmers and agricultural labourers countrywide, will be further detrimental.

“Let’s analyse it in terms of the income-expenditure gap, which we know leads to indebtedness. We won’t have the guarantee of assured marketing once the government regulated APMC market structure collapses. This means our income side will get affected. Now, if we look at the expenditure side, we know from experience that in any form of contract farming, the input costs will relatively increase because the farmer has to meet given standards. With a rise in input costs and a fluctuating income, farmers will be forced to take more loans,” she explained. 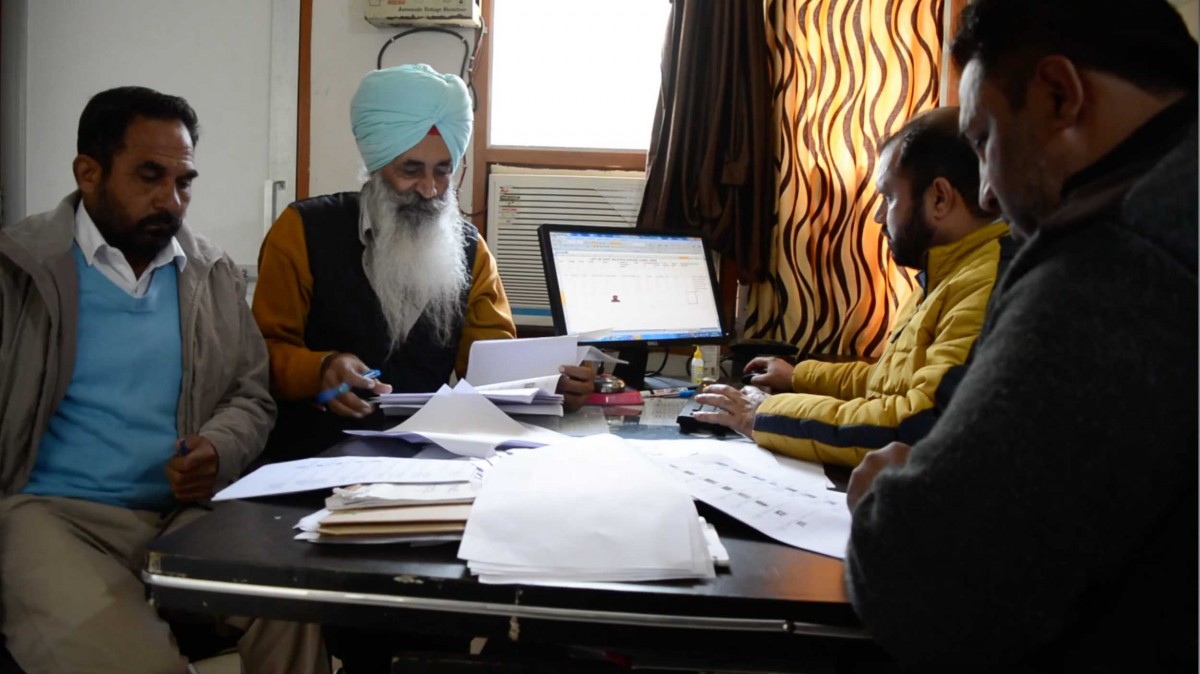 Jaijee argues the same. In an article written by him on December 10, he notes: “The government’s claim to double farm income doesn’t necessarily mean the same thing as doubling the income of people whose forefathers have been tilling the land for generations.”

Jaijee also argues that average land holding has shrunk to such an extent that “even the most hardworking farmer in the world cannot make profit in agriculture.” 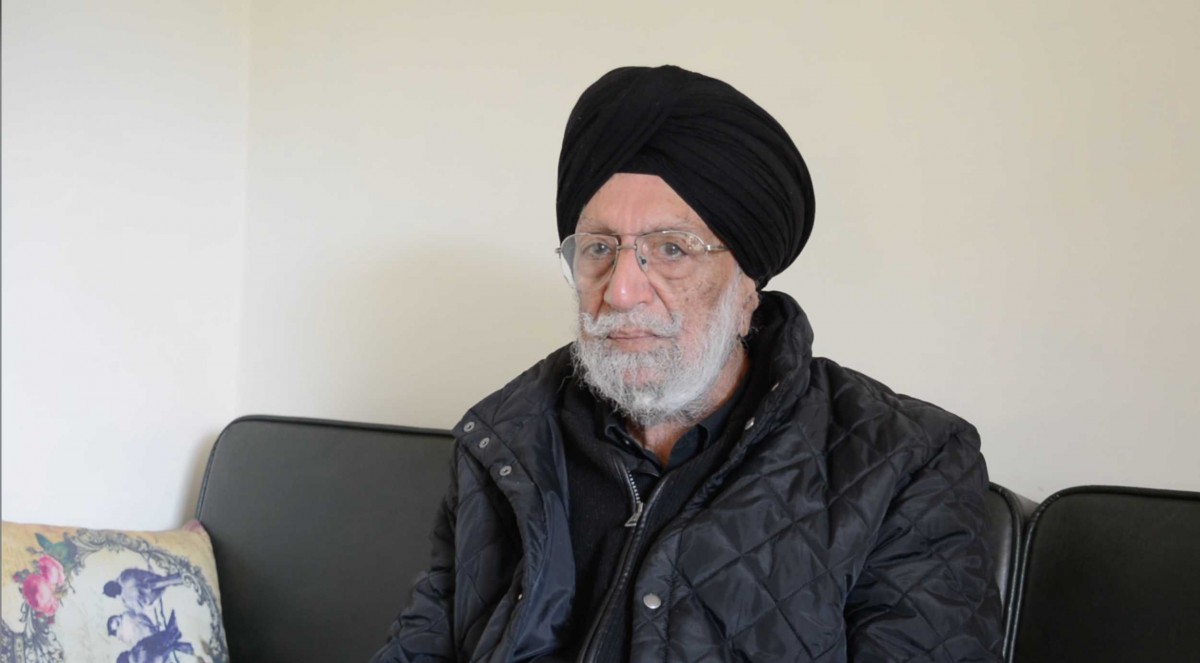 Jagdev’s family in village Jawharwala, who once owned one acre of land before he died by suicide, are now a landless family because their land remains in mortgage, and is uncultivable.

Similarly, in village Baras, Hardeep Kaur’s husband Paramjeet Singh, who died by suicide in July this year, had half an acre of land. They were marginal Jatt farmers until he sold his land to generate money for his daughter’s wedding.

Paramjeet’s father used to have four acres of land, Hardeep said. “His father was an alcoholic, he wasted his assets away. He too had loans to pay. He was left with only an acre. He  gave half  an acre to my husband, another half to his brother.”

“Now we had to sell the half acre for Rs 7 lakh for my daughter’s marriage. My son is a wastrel. I work in the thread-making  factory and try to pay off our debt, sometimes even do domestic work in the homes of people,” she added. Sitting next to Hardeep, an old woman from a family of landed farmers with roughly seven acres of land said, “Slowly, all of us will become landless, if [Prime Minister Narendra] Modi brings in these laws.”

She added, “If you ask what’s in our heart and why we’re struggling day and night against these laws, then you will know it is the fear of becoming landless. We don’t want to see abject poverty.”

Pointing to a young girl on the next cot, the old woman said, “If I don’t fight today, the coming generations will become landless. They’ll ask us what we did for them? They’ll ask us why we pushed them into extreme poverty. They won’t forgive us.”

Economics professor Kesar Singh Bhangoo, who teaches at the Punjabi University (PU) in Patiala, told The Wire that a joint study conducted and authored by him from PU and two other professors from Punjab Agricultural University (PAU) and Guru Nanak Dev University (GNDU), has highlighted that increasing debt is a big cause of shrinking land holdings in Punjab.

“Sometimes, people lease out their land. Sometimes, they have to sell portions of it to pay the debt. So our study, found very clearly, that there is a relationship between debt and size of land holdings,” he said. 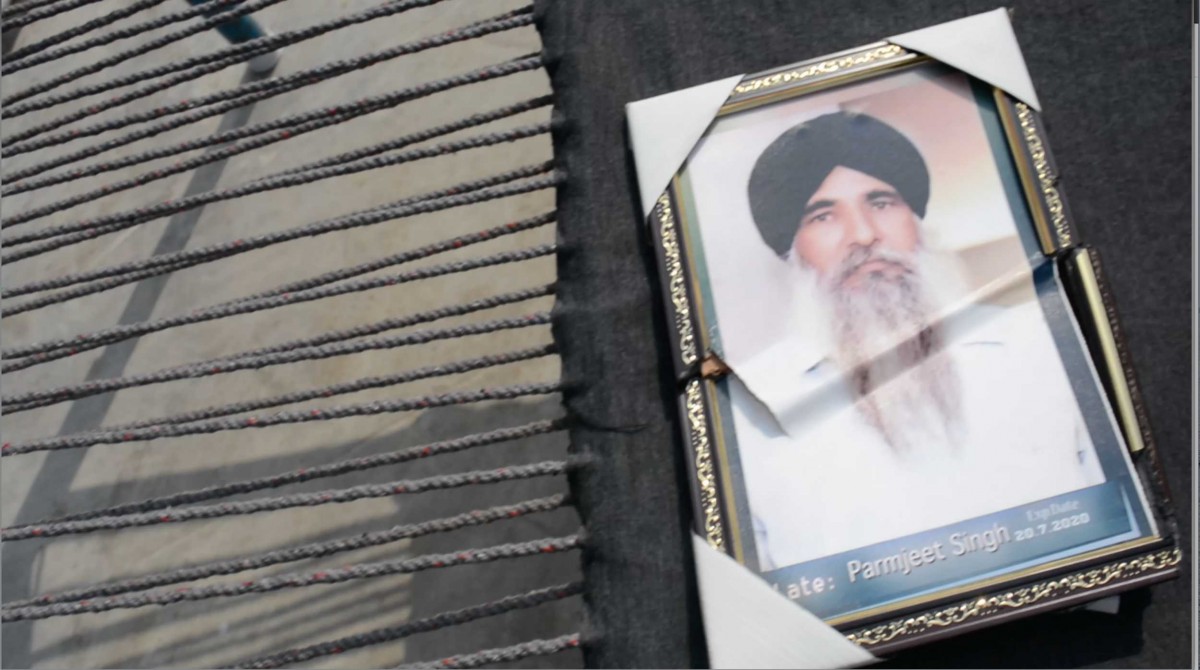 Bhangoo also explained that farmers’ fear of becoming landless because of the Centre’s new farm laws is not an exaggerated one. He said that the three farm laws, combined, have the potential to unleash distressed sale of land in Punjab.

“The three laws, if read together, reveal that the large farmers (10 acre and above land holding) will be able to bargain with agri-businesses companies once they enter a contract farming system. They will have monetary as well political means to negotiate with the corporates. But, those who are small and medium (below 10 acre)  won’t,” he said.

Bhangoo added that over the years, small and medium farmers may be thrown out of the competition, they may bear losses and eventually a situation may arise where due to economic pressure, arising out of  debt or low profitability as we know today, farmers could be forced to sell their land at throw away prices.

“Big corporations may not snatch land away from small farmers directly, but an economic system could get created which will be detrimental to small and medium farmers,” he explained.

According to professor Anupama, the ones on the margins of the agricultural economy – the Dalit landless labourers – will be pushed further into abject poverty, where they could even become homeless.

Jasveer Singh, a farmer from Baras in Patiala district who owns seven acres of land, said that he has taken roughly Rs 10-12 lakh loans from banks as well as from arthiyas. He said that at the back of his mind, he is always aware of the loan he has to repay. 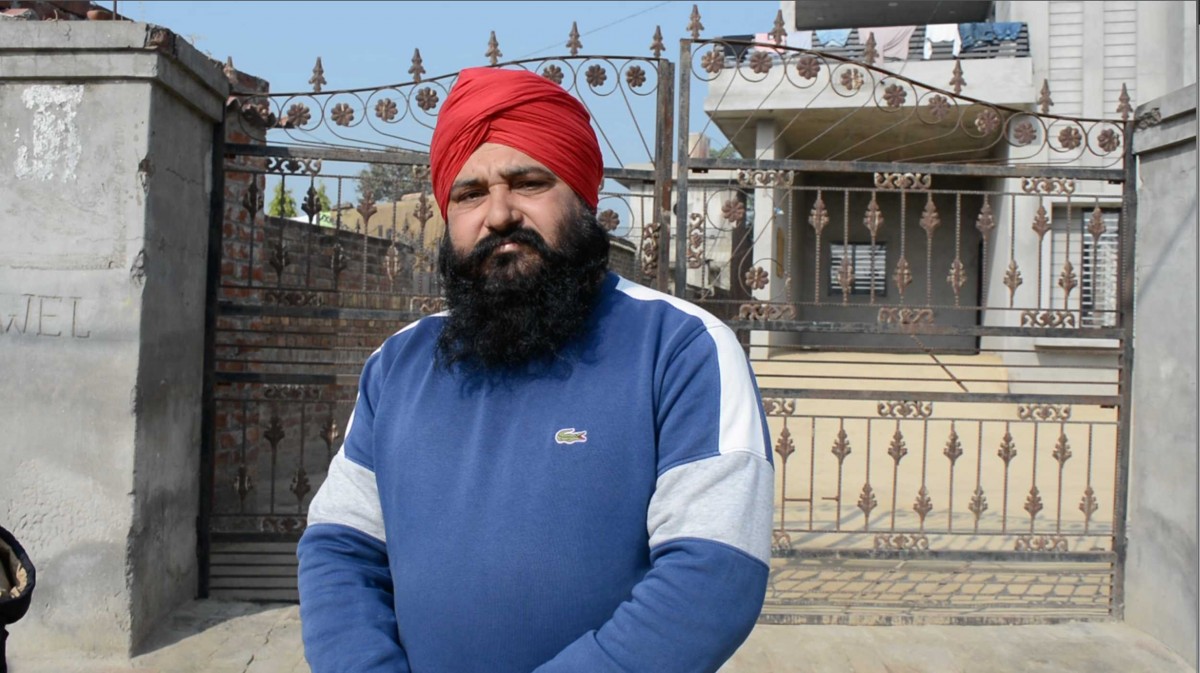 It is often said that Punjab’s farmers, those who are cultivators, take loans to maintain a lavish lifestyle, or blow their money on showing off. “But in our study,” professor Anupama explained, “we found that the extent of loan financed for socio-religious activities is quite low.” She further said, “Because agricultural income is not able to guarantee a minimum social status –  a right of every social being – they opt for loans.”

In a brief telephonic conversation, professor Gian Singh, who is now in California and is writing extensively on the farmers’ movement from both social and economic perspectives, told The Wire that the contentious farm laws must be repealed. If they are, then it will put Punjab in the position it was in before the movement, marked by high indebtedness, low income, and shrinking land holdings. But the professor also said that this struggle has the potential to overhaul many past systems as well, if it continues to grow. “At least we have moved from escapism to struggle,” he said.