Four Factors That Make the Farmers’ Agitation Unlike Any Other

The biting winter of dissent has reminded many of the protests that took place a year ago, against another contentious law which had been ramrodded through parliament.

Mohali: The government and the protesting farmers’ unions reached consensus on two of the four demands on December 30 – almost a month after the farmers’ blockade of Delhi’s borders.

Unions welcomed this climbdown by the government, but the most contentious demand – the repeal of the three farm laws – is scheduled to be discussed once again on January 4. With this, lakhs of farmers, agricultural labourers and their allies have braced themselves to usher in the new year from the streets amidst a sweeping cold wave in north India.

The biting winter of dissent has reminded many of the Shaheen Bagh protests that were taking place, a year ago, at the same time, in New Delhi, against another contentious law which had been bulldozed through the parliament. The permanent sit-in, the songs and dances, and the community kitchens of the farmers’ morcha are deeply evocative of the anti-citizenship Bill protests of last year.

For many Punjabis, the protests are resonant of the brutal December in Sikh history when the four Sahibzaadas (sons) of the tenth Sikh guru, Gobind Singh were killed in the Battle of Chamkaur. Across Punjab, their martyrdom is remembered each year. The last week of December is observed as the ‘Shahidi parv’ or martyrdom week.

To mark the martyrdom week this year, Punjab’s protesting farmers held up posters of the 22 farmers who have lost their lives protesting against the government’s new laws and declared them martyrs as well.

Also read: How Different Are the Ongoing Farmers’ Protests From Those of Colonial Times?

The story of the Sahibzaadas – two older ones who were mutilated, and the younger ones, who were bricked alive, along with Mata Gujri Kaur, the mother of Gobind Singh, who was imprisoned at the ‘Thanda Burj’ or the cold tower, and Bibi Sharan Kaur, a 16-year-old, from a town near Chamkaur, who secretly tried to give a proper funeral to the older princes but was caught and thrown into the pyre alive – is a story which is passed to the young in every Sikh household. Such stories are also helping many stay warm at the borders of New Delhi.

Agitating farmers are not only braving the biting cold but also aggressive state surveillance and arrests in Gujarat and Uttar Pradesh. This, in addition to the water cannons and tear gas shelling which they endured a month ago along with the slander hurled at them by social media spin artists.

As they brave through, the farmers’ have also provided a reality check on four things.

When the agitation first began in Punjab, it began with a loud call from farmers’ unions that the Centre had no business interfering with a state subject matter. The constitutional validity of the move continues to be a matter of debate among legal experts. On September 27 this year, when the 30-odd farmers’ unions held a Punjab-wide strike, the seeds of this movement were sown. At the time, Darshan Pal, who is now at the forefront of negotiations with the Centre had told The Wire that the BJP’s disregard for the federal structure has laid itself bare. He believed that not just an average Punjabi but every citizen of the country would soon stand against BJP’s trashing of Indian federalism and democracy. Even during talks with the government, one of the main contentions of the farmers’ unions has been this attack on federalism. 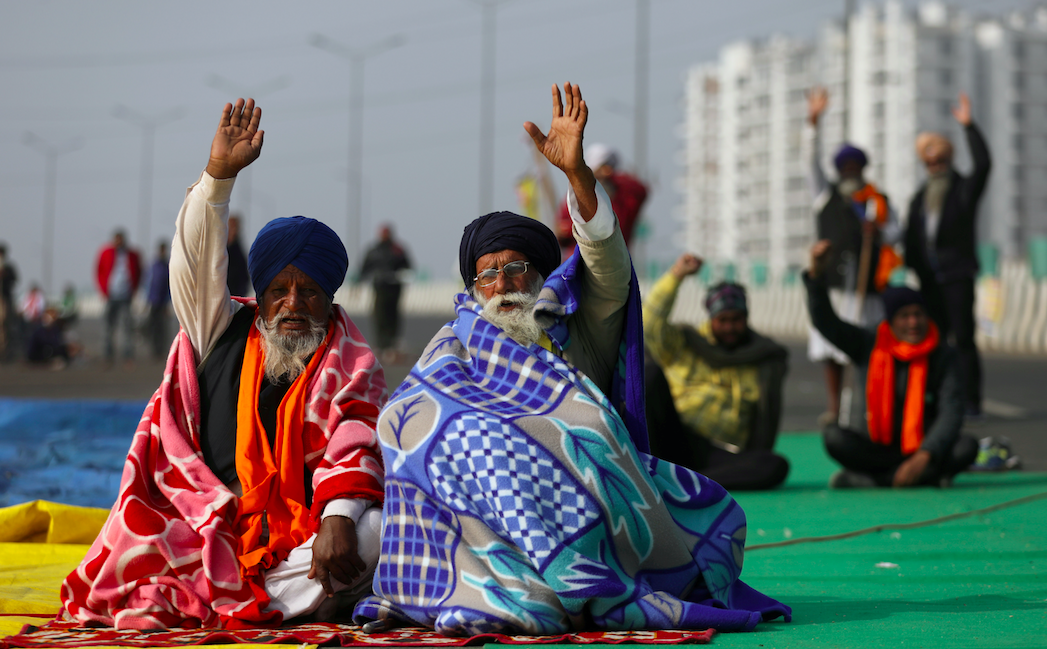 2. A political movement without politicians

The farmers’ unions have successfully maintained a distance from major political parties. For the Bhartiya Kisan Union, this is not new. Historically, the BKU has always acted as a pressure group, against any government of the day. Professor Kesar Singh Bhangoo, an economics professor at the Punjabi University met this correspondent in Patiala recently. He said that farmers’ groups have realised that big politicians of the region, like Prakash Singh Badal, who come from farming backgrounds, have shifted their interests out of it, and their support is merely lip service – for the sake of their politics.

The so-called mainstream media coupled with the BJP’s IT cell has received the biggest reality check. The farmers’ movement has highlighted their irreverence and irrelevance. It started with the boycott of ‘godi media (lapdog media)’. Posters in Gurmukhi, Hindi and English, stuck on tractors and trolleys, with ‘godi media go back’ written on them, were one of the biggest takeaways for anyone who had visited the protest site.

Zee News’ claim that those who were protesting were Khalistan separatists did not hold water, ultimately because the Centre itself continued to pursue talks with the agitating farmers. Moreover, anyone who had visited the protest site would know that the farmers present there were not only from Punjab but several Indian states, some as far as Kerala. Those who made the incendiary remark, in the five-second clip played on Zee News, were never seen after that.

Soon, Twitter labelled  IT-cell head Amit Malviya’s attempts to ‘mislead’ the nation as ‘manipulated media’. This was the first time such an action was been taken by Twitter in India. The fact that Twitter’s first such action was against the ruling party’s IT-cell, speaks volumes about the credibility of the BJP’s media and information front.

Viral picture of a policeman swinging a baton at a farmer during farmers’ protests. Photo: Instagram/Choudharyravi

All of the above scenarios prompted the creation of a parallel mode of information dissemination, run by farmers from the ground. On Twitter, Tractor2Twitter acted as a counter to the government-run IT-cell’s hashtags. The joint farmers front, which is negotiating with the government, also started official social media channels to telecast their daily press briefings because other media channels were not. Parallel to this, a group of like-minded people launched a physical, print newspaper – Trolley Times. People behind all three initiatives have said the same thing: ‘the media is not showing the truth’. Hence there was a need for the farmers to own the means of production for information.

Certain sections of the middle class, at least in Punjab, believe that the costs of food items will skyrocket if large-scale contract farming and hoarding of food grains by agri-business companies are allowed. They’re with the farmers in this agitation but nothing has been said by the government on this concern so far. The middle-class of Chandigarh gathered at the posh Sector-17 earlier this month. They said they were joining the movement because they believe that the new laws will lead to food price inflation.

Apart from this, one of the contentions of the agricultural labourers is that the public-distribution system, a direct result of government procurement from the mandis, will be hit if the mandi system eventually collapses. This will be a big loss to the livelihood of many. Several economists and agricultural experts predict that the government may even amend the National Food Security Act, 2013, as they stop procuring from the mandis.

Even after a month, with no likely resolution in sight, the movement is gaining momentum each day, as five borders of New Delhi remain completely sealed by agitators indefinitely.