Centre’s Crop Insurance Scheme Is ‘Voluntary’, but Opt Out Model Leaves Much to Be Desired

Implementation hurdles and a lack of awareness could throw up some nasty surprises for farmers this Kharif season.

Women working on paddy field in Odisha. Photo/Flickr CC BY 2.0

New Delhi: In February 2020, the Centre announced that its flagship crop insurance scheme, the Pradhan Mantri Fasal Bima Yojana (PMFBY), would be “voluntary” for all farmers starting from the Kharif season this year.

The move came after the scheme drew severe criticism from farmers over inadequate and delayed settlement of claims when their crops failed. Delayed payouts were seen as particularly unfair by some because insurance premiums under the PMFBY scheme used to be automatically deducted from the crop loans that farmers would take out on their Kisan Credit Cards (KCC).

Consequently, the Centre in February said that the scheme was being made voluntary on the request of farmers. “Enrolment under the scheme” would be “made voluntary for all farmers”, it said.

But, has that really happened?

The mechanism by which the scheme is being made voluntary is essentially an ‘opt out’ model. Put simply, this means that if farmers do not want to avail crop insurance under the PMFBY scheme, they can inform their bank and thus exit the scheme. On the other hand, if a farmer does not do this, she would be deemed as having chosen to stay in the scheme and the insurance premium would be deducted from the loan amounts. 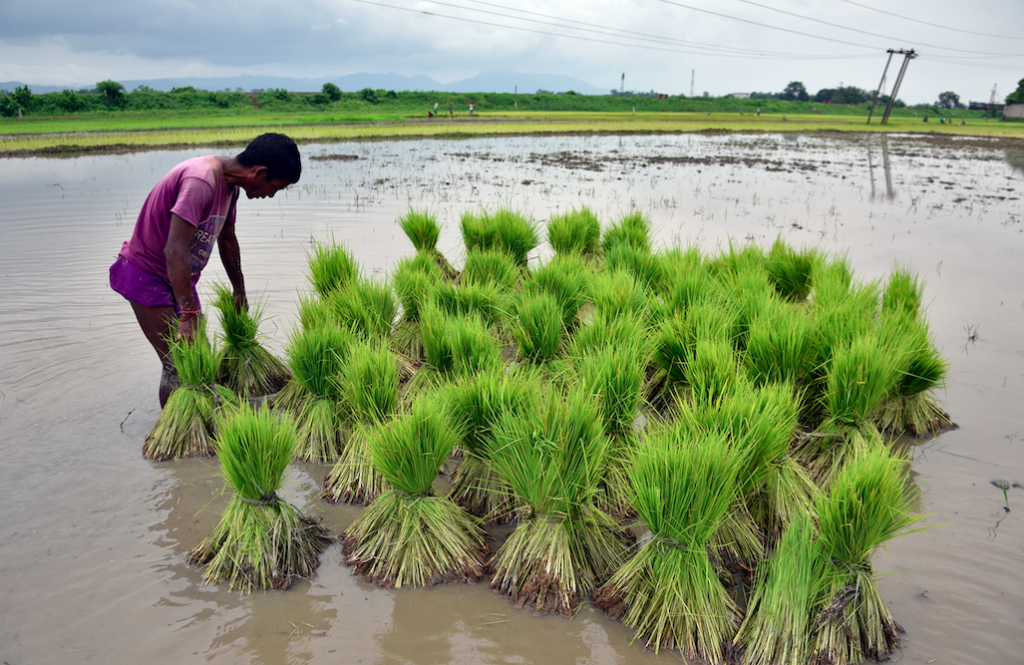 A farmer gathers saplings to be planted at a paddy field in a village in Nagaon district, in Assam. Photo: Reuters/Anuwar Hazarika/Files

Unclear if crucial piece of information has reached farmers

It’s unclear if this crucial piece of information has reached the farmers who have criticised the programme in the past.

For instance, Brijesh Chauhan who owns 5 acres in Meerut district in Uttar Pradesh found out that he had to opt out only when The Wire called him in late July to talk about the status of his enrolment in PMFBY.

“I thought I have to inform the bank if I want to enrol for insurance,” he said. After a few days, he visited his bank branch and was told upon inquiring that he may opt out of the scheme, if he so wants, by giving a declaration to the bank, which he did.

“Now, I have done what I needed to. Let us hope that the money (for premium) is not deducted. But I only found out because you told me. No one else in my village knew and nobody wants to pay premium for this useless scheme,” Chauhan said.

Several farmers The Wire spoke to in Haryana, Uttar Pradesh and Rajasthan said they were aware that the PMFBY had been made voluntary by the government but like Chauhan, were under the impression that they only had to inform their bank in case they wanted to avail of crop insurance under the scheme.

Also Read: What Can the Centre Learn From How States Are Managing Their Own Crop Insurance Schemes?

“Now, I think we will only find out if the money has been deducted when we visit our bank next and get our passbook filled,” said Sonu Chaudhary, a farmer growing paddy in Kurukshetra. “No information came from the bank or from the government in any form that farmers need to provide a declaration.”

Not enough information about the mechanism by which the scheme has been made ‘voluntary’ has reached farmers or farmer leaders. Several farmer leaders The Wire spoke to were not aware that farmers have to visit their respective bank branch and give a signed declaration that they do not want to enrol in the scheme.

Ramandeep Mann, a farm leader working in Haryana and Punjab, was aware of what was needed to be done and did his bit to inform farmers. “I have tried to raise awareness about this but there are so many farmers who will have no idea because the government has simply not taken any steps to provide them with the information. Several farmers have also faced problems in banks,” he said.

Mann also points out that state governments delayed issuing the notification that says farmers can provide a declaration and opt out of the scheme.

For instance, the Uttar Pradesh government only issued the notification on July 20 and said that farmers have until July 24 to provide their signed declaration to the banks in case they wanted to exit the PMFBY.

“Even if all farmers had this information, which they didn’t, how many would have been able to go to the bank and give the declaration in such a short period of time?” asked Abhinav Chaudhary, a young farmer from Muradabad who took it upon himself to try and inform farmers about the need for the declaration.

“I tried, but could only reach a few farmers in my village and some in nearby villages. Nobody knew about this,” he said.

Another problem emerged in Haryana, where even farmers who were aware that they had to opt out of the scheme encountered difficulties when they approached their banks.

The Hindu recently reported that some farmers in Haryana were asked by the banks to produce an affidavit on a Rs 10 stamp paper that they want to opt out.

A farmer carries saplings to plant in a rice field on the outskirts of Ahmedabad, July 5, 2019. Photo: Reuters/Amit Dave

“These kinds of things have happened in Haryana where bank officials have denied farmers who are aware that they can opt out. So even they have not been able to do so,” said Vikal Pachar, of the Akhil Bharatiya Swaminathan Aayog Sangharsh Samiti, an organisation active in Haryana.

Also Read: If Crop Insurance Continues to be Viable, Will Centre’s Plan for Smoothing Out Other Wrinkles Work?

So, on the one hand, very few farmers had the information that they need to sign a declaration to opt out of the scheme, and on the other, many of the farmers who did have the information and wanted to opt out have been denied the choice due to COVID-19 related lockdowns and problems faced in banks.

Mann argues that by employing the ‘opt out’ mechanism without adequate information provided to farmers, the scheme hasn’t really been made voluntary. “It is like saying that if everyone in the country doesn’t explicitly say that they do not want health insurance, they will be charged premium,” he said.

A high ranking official at one of the key insurance companies involved with the scheme said that this is a ‘sleight of hand’.

“The scheme has faced a lot of criticism. So, the government said, ‘Ok, make it voluntary’. On paper it is voluntary. But, in reality, as you are seeing, it’s not voluntary. Farmers would simply not know what they have to do,” the official, who declined to be identified, told The Wire.

Former agriculture secretary Siraj Husain, who was one of the architects of the PMFBY, and has written extensively – here, here and here – on the scheme in recent months for The Wire, has a different point of view and argues that having an ‘opt-in’ mechanism would have made the implementation of the scheme too unwieldy.

“The Union government fulfilled its promise in the BJP’s election manifesto and made PMFBY optional by giving farmers the choice of taking crop insurance. For this, they were expected to inform their bank that they do not want be insured. Also, no state government directed that every farmer wanting to insure his crop has to give a written request to the bank. That would have made crores of farmers line up at bank branches. These were correct decisions,” he said.