The pulses will have to be milled before they are transported to different parts of the country, and both of these sectors are at a standstill because of the lockdown.

An employee collects lentils from a container inside a grocery store at a residential area in Mumbai, India, May 11, 2016. Photo: Reuters/Shailesh Andrade

Meerut: Last week finance minister Nirmala Sitharaman announced that 80 crore ‘poor people’ will be provided provisions of food, apart from what is already provided under the public distribution system (PDS), free of charge. In addition to rice and wheat, which is provided through PDS, the government will also provide one kilogram of preferred pulse per household per month, Sitharaman said.

The one kilogram of pulses per household translates to 200 gram per person per month. Even the provision of that, however, is unlikely to happen anytime soon.

According to a senior official at the National Agricultural Cooperative Marketing Federation of India (NAFED), it could take ‘weeks’ before the pulses actually start reaching people.

“It can’t happen overnight. It is a huge challenge which we will be undertaking for the first time,” said the official.

The process will begin with state government’s sending requisition letters that will state the quantity of pulses required and which pulse they prefer. Once those letters are in, the pulses need to be transported to mills for processing. Then they can be transported to the states from where the states can transfer them to district headquarters and eventually to ration shops.

“As you can imagine, this process is going to take a while,” the official said.

Almost a week after Sitharaman’s announcement, even the first step has not been completed. “Most states have sent in their requisition letters, but some states are yet to do that,” an official at the Ministry of Consumer Affairs, Food and Public Distribution System said.

Also Read: Fighting Covid Will Be a Long Haul but Normal Life Does Not Need to be Kept on Hold

The subsequent steps face real bottlenecks. “You must understand that NAFED is doing this for the first time,” the official at NAFED said, explaining that this is the first time that pulses are to be provided through PDS in every state. In the past, a few states like Andhra Pradesh, Telangana, Punjab and Himachal Pradesh have, for a year or two, provided pulses through ration shops. But for the rest, it will be an entirely new exercise.

Even though NAFED has adequate stocks of pulses – 22.32 lakh tonnes, they need to be milled. “That is now a very difficult task, because we rely on private millers. NAFED can’t mill the dal on its own. We have to go to the private sector,” a NAFED official said.

And private millers are facing a severe shortage of labour, raw material and transport. “Nearly 90% of dal mills are not functioning in the country. Farmers are not able to bring us raw material. All our workers have left for their villages. Even if we are able to process the dal, transport is not available. In the few cases that does happen, the trucks get stopped at borders. There is no uniform policy across the country to ensure the supply of essentials. Our industry is suffering,” Suresh Agarwal, president of the All India Daal Mill association told The Wire. 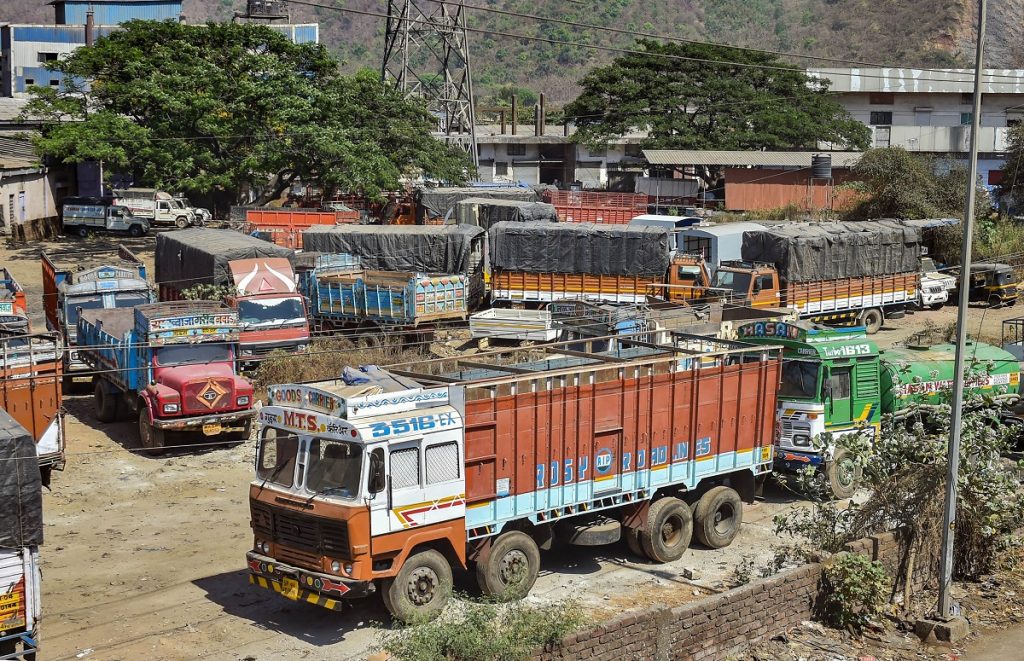 Trucks parked near a highway during the nationwide lockdown in Thane, April 1, 2020. Photo: PTI/Mitesh Bhuvad

Although the government has, on March 29, notified that the movement of all goods vehicles be allowed, supply bottlenecks that were created in the first week of uncertainty and lack of clarity post the imposition of the lockdown has impacted the supply chain.

“Some truck drivers have abandoned the trucks. In some states, the police is not allowing movement even now. So the problems in the supply chain are very much there,” Agarwal said.

In such a situation, Agarwal said, it will be very difficult for the mills to ensure even the usual supply, let alone the added demand to process pulses that are to be distributed through the PDS. “We could be facing a shortage even in the usual demand that we cater to,” he said.

The problems don’t end there either. Even if we assume that the private mills are functioning without any problems, supply of pulses to ration shops would have to undergo a few other challenges.

Pulses are primarily procured from a few districts and storage facilities are unavailable across the country. This is radically different from the comparatively better-oiled system of procurement and distribution of rice and wheat, where facilities are available in most parts of the country.

This creates a huge logistical challenge for the government, as the pulses that are stored only in certain parts of the country will have to be distributed in all parts. To add to that, the pulses have to be first transported to the mills for processing.

“Certain districts may not have mills. So first, they will have to be transported to the mills,” said the NAFED official.

Once the processing is done – assuming the mills are functioning and have the bandwidth, neither of which is currently possible – the pulses have to be transported to all the districts in the country.

“It is a huge challenge. See, the dal is lying somewhere. You get it and send it to the mill, which is somewhere else. Once the processing is done, you pack it – for which raw materials have to be there – and send it by rail or road – to all the states,” the NAFED official said.

Also Read: At Delhi’s Ghazipur Mandi, the Vegetable Supply Chain is Being Twisted

A suggestion which has been floated is that, to begin with, chana (chickpea) be provided to households under PDS. NAFED currently has 16 lakh tonnes of chana stocked, and around 10 million tonnes is expected to be harvested this season.

Unlike other pulses such as arhar or urad, chana does not have to be processed and can be soaked overnight before being cooked in a variety of ways.

According to NAFED, they can begin the supply of chana immediately. “If the issue of transport is sorted out (which the government will have to ensure for us), people can start getting chana in a matter of five days,” the official said.

The issue here is that states have particular preferences, which can be quite rigid. “If people in our state prefer arhar, it will be very difficult to give them chana instead,” said an official in the department of food, civil supplies and consumer affairs in Karnataka.