Dehradun: “When I die I am not going to leave behind gold or currency for my grandchildren. I will leave for them organic seeds that I have saved over the years which they will remember as their grandmother’s legacy. They must know that this biodiversity is the symbol of our culture,’’ Pranita Hendwe of Maharashtra said in an impassioned speech at Vasundhara 2021, an event held here on saving biodiversity, organic farming, healthy living and farmers’ livelihoods.

COVID-19 pandemic through 2020-21 hit the livelihood of millions of people but it generated awareness about organic foods and herbs as a preferred cuisine during the calamity. In fact, such food became a medicine during the harsh days of the spread of the pandemic that kept people indoors. Citizens became aware of building preventive immunity, pollution-free air, clean environment and healthy living in harmony with nature.

These trying times did more for organic farming than any government push could have. E-marketing, online multi-national retail chains and mega departmental stores were quick to jump on the bandwagon and claimed ownership of organic products in order to boost sales.

Widowed Renuka Sapate of Maharashtra was called ‘mad’ when she started organic farming on a piece of land so much so that when she wanted to hire a male hand for spraying her crop with bio-pesticide, all labour stayed away from ‘mad’ woman’s field.

The scepticism about organic farming comes from a lack of government hand-holding of small farmers as they convert chemical-ridden fields to humus rich soil over a four-year period.

Having been at it for over 10 years, Pranita and Renuka were among the hundreds of farmers from all over the country who deposited in the NGO-run Navdanya biodiversity seed bank hordes of varieties of local seeds saved and developed by them to address climate change impact for dry land, rain-fed, saline soils, flood zones, cattle feed and fodder. Some resilient varieties of paddy, pulses and millets that had disappeared were revived in farmers’ fields. But these are community efforts.

Earlier in the public sector, there was free exchange of germplasms between institutions, but as there was not much consciousness about patents on products and Intellectual Property Rights (IPRs), some of these varieties returned to farmers’ fields as private seed monopolies with royalty on sales, a retired agriculture scientist said requesting anonymity.

Navdanya on its part maintains community registers that document seed descriptions based on gastronomical, morphological, agronomical data, locale and cultural value. These are compiled for exchange and distribution across eco-regions for the benefit of communities, not for non-local commercial profits. 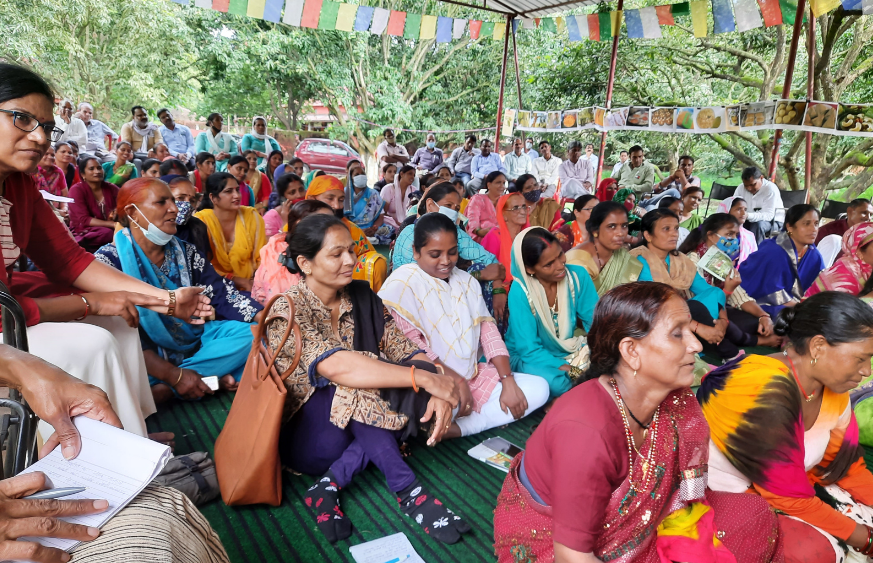 A section of the participants at Vasundhara 2021 event in Dehradun. Photo: Gargi Parsai

“This has proved to be vital countervailing force to the IPR regime and refutes the position that farmers’ varieties are ‘gifts of nature’ that can be appropriated freely for corporate benefit. With strong documentation, the role of farmers as plant breeders is revitalised, strengthening their resistance to seed monopolies and IPR legislation,’’ said Vandana Shiva, founder of Navdanya.

With the initiation of hybrid and genetically engineered seeds in the post-green revolution period, traditional seeds were gradually edged out. The crises in the output of pulses and indigenous edible oilseeds in the wake of policy shift after liberalisation of the economy in the 1990s that give way to the spread of transgenic cotton, and soybean are telling examples. Signaling rapidly changing ecosystem, the Seeds Bill that was introduced in 2004 to replace the Seeds Act of 1966, undermined farmers’ age-old right to save, exchange, re-use and sell seeds. After huge protests, the draft was modified but differences with the industry remain and the revised Seeds Bill, 2019  is hanging fire.

Similar is the case with the Pesticides Management Bill, 2020, which is pending in parliament. The Bill does not fix accountability nor clearly defines approval processes. Among other things, there are objections to the Ministry of Agriculture and Farmers’ Welfare, a promoter of pesticides, being assigned the responsibility of regulating them, in a clear case of conflict of interest. Again differences are unresolved.

While there is an initiative to encourage organic farming with Prime Minister Narendra Modi reinforcing the intent in his August 15 Independence Day speech this year, there is no real policy thrust to incentivise grassroots farmers to move away from chemical farming, as the stealthy proliferation of unapproved round-up herbicide shows. In fact, the pesticide industry has an estimated market of $230 billion in India and is projected to grow.

In contrast, the organic market is taking baby steps and despite increase in domestic demand for organic food and beverages during the pandemic, only 2.76% of a total net sown area of 141 million hectares in the country has come under organic certification, according to Union Agriculture and Farmers’ Welfare Ministry.

Only about 2% of the 140 million land owners are so far covered under the National Programme for Organic Production (NPOP), the sources said. Domestic sales in organic products are estimated in the range of Rs 4,000 to Rs 4,350  crore. Sikkim is the only state that turned fully organic in 2016.

On the exports front,  APEDA (Agriculture and Processed Foods Products Export Development Authority) puts the organic food export in 2020-21 at $1,040.95 million (Rs 7,671 crore) with processed foods including soya meal taking the lead at 57% followed by oilseeds (9%) and cereals and millets (7%).

Also read: Putting Wheat in Its Place, or Why the Green Revolution Wasn’t Quite What It’s Made Out To Be

For all the noises made officially, organic farming is restricted by the complex process of certification involving cumbersome paperwork and expensive third-party certification which is hugely challenging for small and marginal farmers, many of whom are illiterate and not digital savvy. Lack of incentives at par with conventional farming, lack of infrastructure and absence of distribution network are further deterrents. Direct sale of organic produce to consumer, however, does not require mandatory certification but there is no official data available on the share of uncertified sales and acreage.

Bigger challenge for organic growers is the destruction of their painstakingly done multi-crop farming by invasion of wild animals that are fast losing their forest habitat in the face of degradation and indiscriminate removal of trees to give way to government’s development projects. Displaced and deprived of food, feed and water in dwindling forests, animals such as Neelgai (blue cow), elephants, wild boars, pigs, monkeys invade farmers’ fields uprooting trees and plants with disastrous and costly results. Governments are not addressing this crucial aspect of farming, nor are farmers compensated for their loss.

There is a view that instead of re-planting commercial trees, sowing of wild berries, tubers and fruit-bearing leafy trees in forest areas and reviving water bodies are steps that government must take urgently to reverse animal ingress into farms and human habitats.

Food activists and environmentalists are dismayed at the twin government plan for mandatory distribution of cereals fortified with synthetic material when India is rich in home-grown nutritious foods and for plantation of water guzzling oil palm in the northeast with a gestation period of four to five years.

The country should go back to encouraging traditional oilseeds that can be produced from annually grown flex, sesame, groundnut, coconut and mustard crops, instead of feeding consumers solvent extracted soybean, rice bran and oil palm that are not so benign.

A recently published study on ‘Evaluation of Environment and Socioeconomic Factors Contributing to Fragility Fractures in India’ highlights that farmers exposed to pesticides and agrochemicals are prone to develop large and significant fragility fractures. The study recommends further research into the crucial finding.

Shiva is certain that organic is the only future for India: “Governments function in waves. But organic is the only system that will conserve resources, protect livelihoods of small farmers, reduce green house gases, climate vulnerability and provide healthy food. If you ever have an emergency of any kind be it of soil, water, health or climate, only organic can solve all these.’’

For now it appears that the government is riding on two boats. On one hand, it pays lip service to the growth of organic farming in small and medium landholdings. On the other hand, it promotes corporate farming with its recently introduced reforms-oriented farm laws. Unless incentives provided to seed, fertiliser and pesticide industry are reconfigured to help small producers, organic farming cannot prosper to the extent that enhances farmers’ income, and makes agriculture sustainable and the food that lands on our table toxin- free.

Gargi Parsai is a New Delhi-based senior journalist. She was associate editor with The Hindu.