Not All Families of Andhra Farmers Who Died by Suicide Received Compensation, Mr Chief Minister

On June 14, AP's Jagan Mohan Reddy asserted that the state had no dues in regard to farmer suicides. A field study by a human rights organisation and a farmers' organisation proves him wrong. 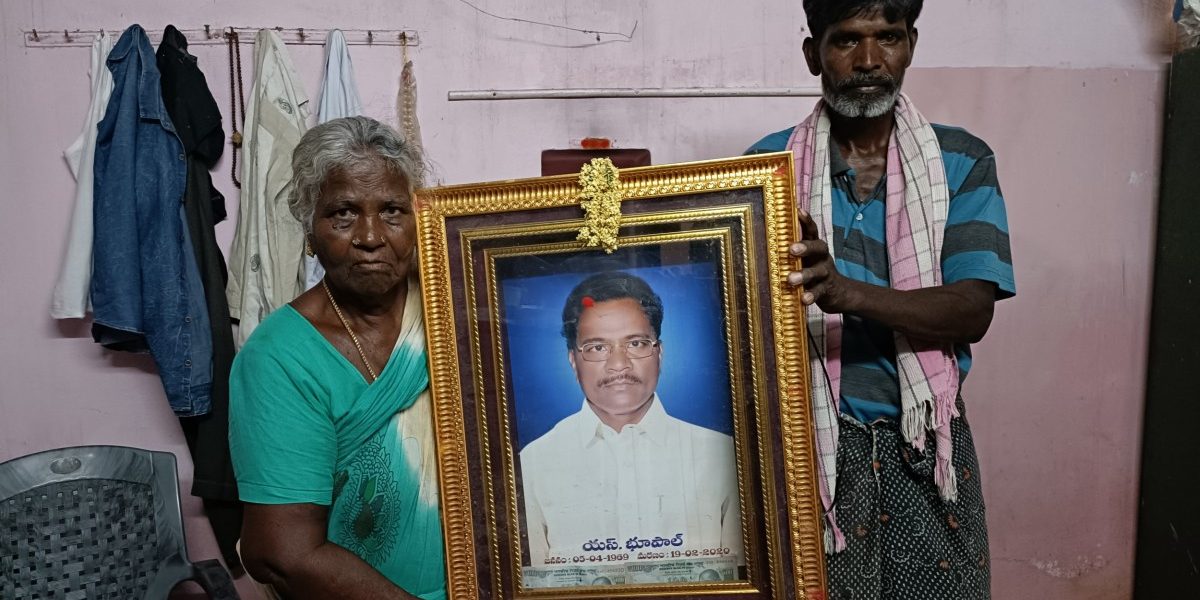 S. Krishnamma, mother of S. Bhoopalayya, a farmer from T.K.M. Peta village of Karvetinagar mandal of Chittoor district who ended his life on February 19, 2020. The farmer consuming poison owing to crop damage which left him with a debt of Rs 6 lakhs. The family says they haven’t received even the Rs 1 lakh paid to many families in the state recently. Fellow villager T. Nagaraj helps her hold the photo.

Tirupati: For T. Anitha Reddy, 22, the future seems bleak. Having lost her 43-year-old father, T. Venkateshwarlu Reddy, to suicide on December 18, 2020, while she was still a B.Tech student, and then her mother to ill health in 2022, she faces a debt of Rs 7 lakh due to the loans her farmer father had had to take and her mother’s medical expenses.

Stuck in her village because she does not have the funds to move to a city and find work, she is unable even to put her engineering degree to good use. She considered farming, since the less than two acres of land her parents owned in their native Karlapudi village, Kovanuru panchayat in KVB Puram mandal of Tirupati district, is now hers. But her maternal uncle, who lives in the same village, dissuaded her from doing so due to the investment risks involved in farming and the unpredictable weather.

“We certainly cannot afford to add to our debt,” said Anitha. “Having toiled for six months in his one acre paddy field, all my uncle earned was a meagre Rs 7,000. Less than a farm labourer would earn at a wage of Rs 300 per day.”

Anitha cannot even lease her land to tenant farmers at market rates due to the fact that those farmers face the same investment risks. “Those who take land on tenancy are reluctant to cultivate, citing the lack of proper returns. So I had to lease the land for Rs 6,000 per acre rather than the usual Rs 14,000 per acre,” Anitha said.

Anitha might not have found herself so desolate had the state government initiated a proper inquiry into her father’s death. The provisions of G.O. 43 (the government order issued on February 20, 2020, that raised the compensation for farmer suicides from Rs 5 lakhs to Rs 7 lakhs) entail a visit by a three-person committee led by a mandal revenue officer (MRO) and including a police inspector and the mandal agriculture officer within 24 hours of a farmer’s death by suicide. If this committee files a positive report, a team led by a revenue divisional officer must follow up and compensation of Rs 7 lakhs must be paid.

But that did not happen in Anitha’s case.

“The village revenue officer (VRO) and the MRO came once after my father hanged himself. And the only help we received from the government was Rs 1 lakh. I got a call from a government official to confirm that it had arrived in our bank account. The VRO and MRO asked me how my father, who had a meagre 1.2 acres of land (some of my family land still remains in my grandfather’s name), had incurred Rs 4 lakhs of debt as he had not dug any borewells and the rains were good enough to ensure that there was no crop loss,” Anitha said. 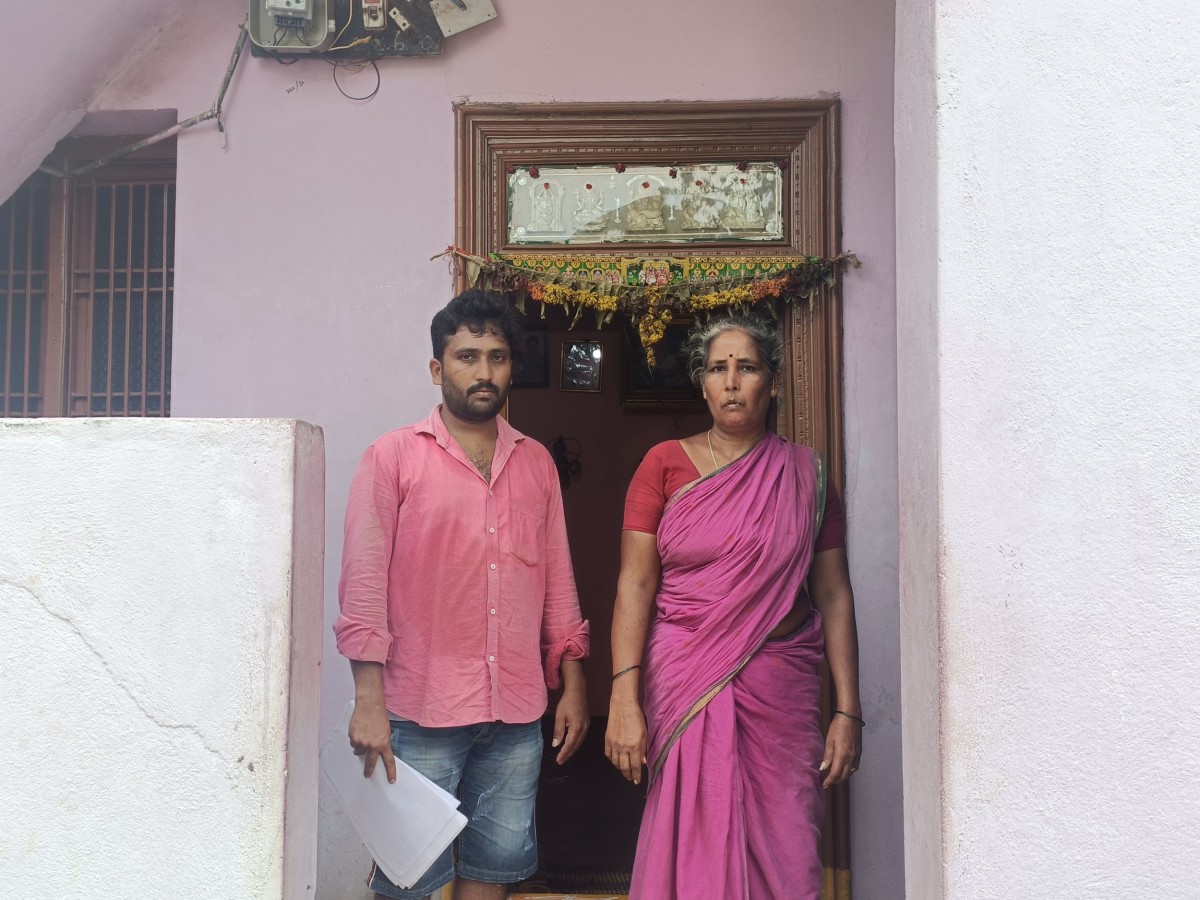 M. Babu and M. Subamma, the son and widow of M. Bhaskar Mandadi, at their home in Venugopalapuram village of Puttur mandal in Chittoor district are still awaiting compensation. The farmer had ended his life on February 27, 2020. So far, they have not received even the Rs 1 lakh compensation that other families of deceased farmers have received and Subamma has not yet received the pension given to widows. The First Information Report registered in Bhaskar Mandadi’s case says that he ended his life owing to failed borewells and crop failure.

P. Jayachandra Reddy, Anitha’s neighbour and a farmer, believes that the officials were wrong in asking Anitha this question.

“Only 10 villages in our mandal get assured Telugu Ganga water (the name given to the Krishna river water canal which carries water from Srisailam dam to Chennai). The farmers of the rest of the mandal have to rely on the monsoon or borewells. If the officials visited us, they would know this. At least 25% of the water from the small pond in our village does not flow at the dead level and has to be drawn using pumps,” he said.

The officials also did not account for the three extra acres of land that Anitha’s father had leased for their water facilities. “This added to our losses,” Anitha said.

Anitha is not alone in facing this tribulation. The family of D. Elumalai, a farmer from Srinivasapuram village of the same mandal who had also died by suicide, had dug six borewells of which two fetched water.

“The six acres of family land were in the name of my brother at the time he consumed pesticide. The casing pipes fixed in those borewells still exist as proof of those expenses. A week after my brother’s death, when we approached the MRO office with proof to apply for compensation, we were told we should have come a few days earlier,” said D. Eswaraiah, Elumalai’s brother.

Provisions in the G.O. 43 entail the completion of the inquiry within a week. But a post-mortem had been carried out on the body of the deceased farmer, so it cannot be said that the officials had not been informed of Elumalai’s death.

“The officials said we were late and so did not pursue our attempts to get compensation. None of the officials have visited us so far, but we got Rs 1 lakh recently,” added Eswaraiah. D. Eswaraiah, brother of deceased farmer D. Elumalai, along with his nephew D. Munikrishna, at village Srinivasapuram of KVB Puram mandal in Tirupati district of AP. They say bank officials forcibly collected interest from them. The two sons of the deceased farmer also work as painters in the nearby town.

Since Eswariah’s family had received the rythu bharosa from the government (a scheme in which the government provides farmers with financial aid every year), it was clear that the land is part of the state’s online records and that the state recognised Elumalai as a farmer.

“Of the eight families we met in Tirupati, Chittoor and Nagari divisions in Tirupati and Chittoor districts, only one family has received Rs 7 lakhs in compensation. The others have been left high and dry. There are hundreds of such instances across Andhra Pradesh. These instances expose the assertion made by Chief Minister Jagan Mohan Reddy on June 14 that the families of all the farmers who have died by suicide have been paid their due compensation. We have details of many farmers who own land and have the relevant papers, but have been left out. Some of them had also leased land,” said V.S. Krishna, the coordination committee member of Human Rights Forum (HRF), AP and Telangana.

“The farmers who had died by suicide had principally raised paddy, maize and groundnut, relying on borewells for water. Lack of institutional credit had led them to private money lenders, resulting in high indebtedness. These farmers also lacked access to reliable and reasonably priced inputs and remunerative price for their output. We call upon the government to stop trying to play down the crisis,” Krishna added.

On August 1, the HRF and the Rythu Swarajya Vedika (RSV), a farmer’s organisation that helps families that have been denied compensation, conducted a fact-finding field study of the families of farmers who had died by suicide. M. Bharathi, widow of M. Raghupathi, a farmer who ended his life owing to debt, from Kalikapuram village of Nindra mandal. The farmer had dug three borewells which did not yield water. He had had three acres in his name and had taken three acres on lease to cultivate sugarcane. A debt of Rs 10 lakhs led to his suicide. R.K. Roja, the local member of the legislative assembly (now a minister), had visited the family when Raghupathi passed away and had promised help. But the family still awaits compensation.

Asked under which provision people like Anitha and Eswaraiah had been paid Rs 1 lakh, C. Hari Kiran, the state commissioner of agriculture, said, “The Rs 1 lakh is paid by the GSWS (Grama Sachivalayam Ward Services) department as immediate humanitarian support. After due verification, the remaining sum due to them will be paid. Around 60 cases had come to us after the process was completed and we have paid them their compensation. Only four to five cases are pending payment due to improper bank account details or for other reasons. The entire process has been made online since November 2021 and we are tracking them now.”

The official’s claim that the amount has not been reduced, though, is contradicted by the government order that is still available online.

A beneficiary of the Rs 1 lakh compensation, D. Vimala, the widow of farmer D. Amarnath Reddy from Mudivedu village, Dadamvaripalli post, Kurabalakota mandal of Annamayya district, said, “No officials have visited us so far. One day the GSWS staff came to us and sought details of our bank account and asked for other documents. The very next day we received Rs 1 lakh in our account. That was the same day that the Jana Sena leader Pawan Kalyan had distributed Rs 1 lakh to the families of farmers who had ended their lives. I was surprised by the speed with which we got the money. I watch the news and am aware of what is happening in the state and the country. What have they ascertained by this exercise? They need to probe the farmers’ deaths properly and pay compensation.”

G. Neelamma, the widow of tenant farmer G. Narasimhulu from Yerraballe village, Duvvuru mandal of YSR Kadapa district, has been denied compensation despite a positive recommendation by the MRO committee. “I had to deposit the Rs 1 lakh I got with a village elder as all of my creditors wanted the money. They are pressuring me to sell the plot of land on which I have a house and repay the money. I hope I get the remaining Rs 6 lakhs to repay the Rs 7.5 lakhs debt left by my husband,” she said.

According to B. Kondal Reddy, convenor of the RSV, the government needs to come up with a one-time settlement provision in the financial package to mitigate the debt burden of these families.

“This will ensure they are not harassed by their creditors,” he explained.

All photos by the author.

G. Ram Mohan is a freelance journalist. He can be contacted on Twitter at @mnirm.