Ninth Round of Centre-Farmer Talks Ends in Deadlock Again

The unions, while agreeing that they too wanted the impasse to end, reiterated that the government’s proposal was nothing new. 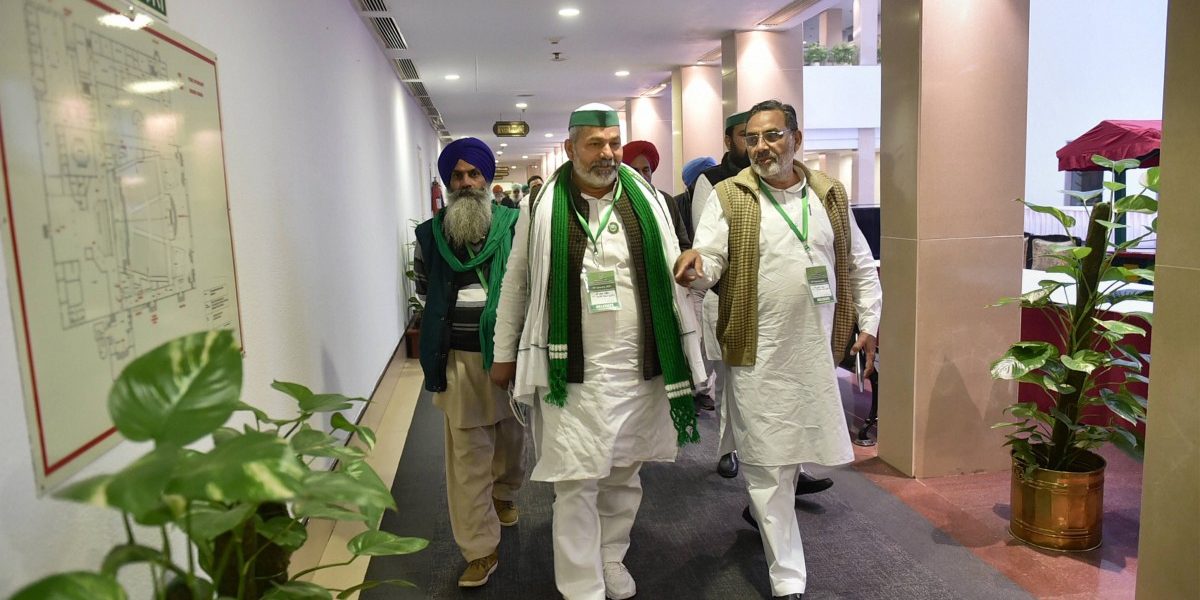 Bharatiya Kisan Unon (BKU) spokesperson Rakesh Tikiat leaves after the ninth round of talks with the government over the new farm laws, at Vigyan Bhawan in New Delhi, Friday, January 15, 2021. Photo: PTI/Arun Sharma

New Delhi: Days after the Supreme Court attempted to broker a truce between protesting farmers’ unions and the Centre, the ninth round of discussions held between the two parties on Friday ended in yet another deadlock.

While the farmers’ unions stuck to their demand that the controversial farm laws should be repealed in their entirety, the Union government refused to budge. Union agriculture minister Narendra Singh Tomar, on the other hand, said that the farmers’ unions were not ready to take a step forward despite the willingness shown by the Centre to accommodate most of their concerns.

“I did not want to say it but the farmers have been telling media persons that we are firm on farm laws but we have accepted most of your demands but the farmers are stuck on their stand. Farmers are not even taking a step forward,” Tomar told the press after the meeting. He also hit out at Congress leader Rahul Gandhi, who has been supporting the farmers’ protests, and accused him of “lying” as his party had promised similar reforms in agriculture in its election manifesto.

The unions, while agreeing that they too wanted the impasse to end, reiterated that the government’s proposal was nothing new, and that they have already made their stance clear that the laws should be repealed. According to sources, they also took exception to the police crackdown on farmers who protested at Haryana chief minister Manohar Lal Khattar’s rally in Karnal.

One contention between the two parties was the unilateral way in which the Supreme Court appointed a committee to mediate between the Centre and the farmers. The unions categorically made it known that they wouldn’t present themselves as all its members were already pro-farm laws. Tomar, however, said that the Centre will present their side in front of the committee, and urged the unions to do the same.

On Thursday, as farmers questioned the legitimacy of the committee, one member Bhupinder Singh Mann recused himself from the role, giving a setback to the apex court’s mediation process. Mann said he didn’t want to “compromise farmers’ interests”.

Bharat Kisan Union spokesperson Rakesh Tikait said that they will not go to the Committee constituted by the Supreme Court and talk to Central government only. Adding more he said, “Our demands of repealing of the three farm laws and MSP guarantee remain.”

“The government is adamant it won’t repeal the laws. We have suggested that it remove the changes made to the Essential Commodities Act instead of scrapping it altogether. But the Agriculture Minister has not said anything to this,” All-India Kisan Sabha (Punjab) leader Balkaran Singh Brar told NDTV.

“One member of the court’s panel has recused himself and there are talks another may do so soon. We want the Supreme Court to pressure the centre for repeal of laws,” Kisan Sangharsh Samiti member Sivendra Singh told NDTV.

As the stalemate continued, both parties decided to hold the next round of talks on January 19, 2020.

Today’s talks with farmers unions were not decisive. We will hold talks again on 19th January. We are positive to reach a solution through talks. The government is concerned about the farmers protesting in cold conditions: Union Agriculture Minister Narendra Singh Tomar pic.twitter.com/izobQHE7B5

The farmers’ protests at the borders of the national capital began on November 26, 2020 and entered their 51st day on Friday. The 40-odd unions have said that they wanted to continue direct communication with the Centre instead of the Supreme Court-appointed committee, which they referred to as “brokers”. The union government has agreed to continue its talks but also urged the unions to reconsider their decision to not present themselves before the committee.