Premium collected by insurance companies has increased by Rs 36,848 crore, while the number of farmers covered has increased only by 0.42%, according to RTI data obtained by The Wire. 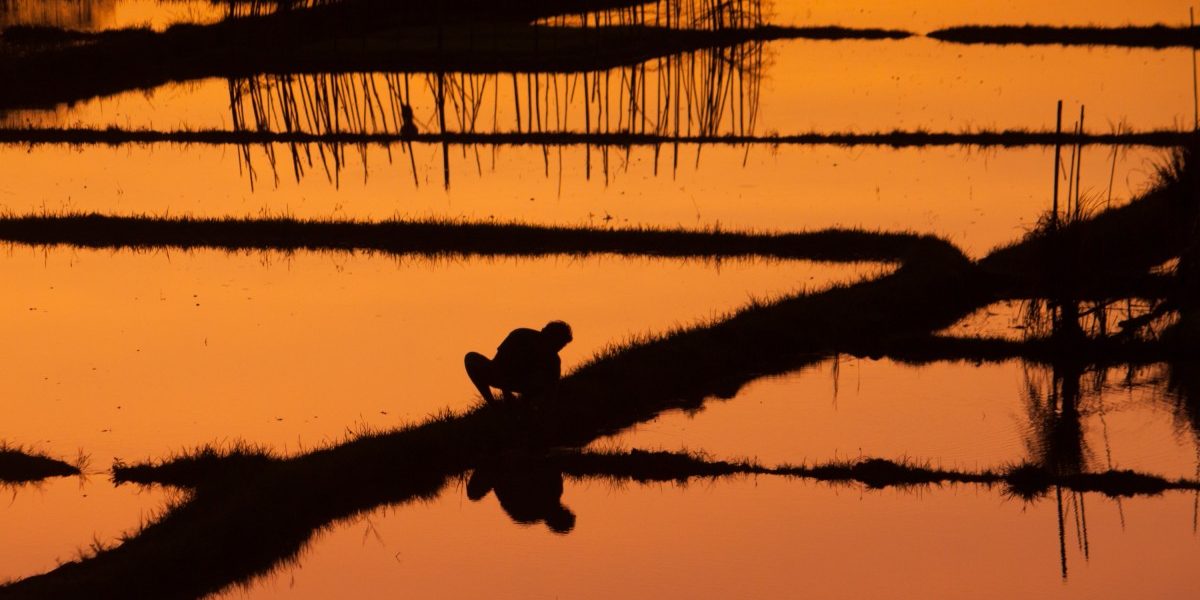 It would “bring about a major transformation in the lives of farmers”, Modi had said at the time.

However, after the implementation of the PMFBY, the number of farmers covered by crop insurance has gone up only by 0.42%. On the other hand, premiums paid to insurance companies have increased by 350%, according to data that the Ministry of Agriculture and Farmer’s Welfare provided to The Wire under a Right to Information (RTI) application.

When the government announced the new scheme, it said that the PMFBY “incorporates the best features of all previous schemes and at the same time, all previous shortcomings/weaknesses have been removed”.

It claimed that farmers will have to pay lower amounts as premium and that through the use of technology, the government will ensure ‘quicker settlement of claims’ compared to the previous crop insurance schemes.

Government claims not borne out by data

For 2014-15 and 2015-16, when the National Agricultural Insurance Scheme (NAIS) and Modified National Agricultural Insurance Scheme (MNAIS) were operational before getting subsumed under the PMFBY, the gross premium collected was Rs 10,560 crore. And total claims paid, at Rs 28,564 crore, was in fact more than the premium collected. 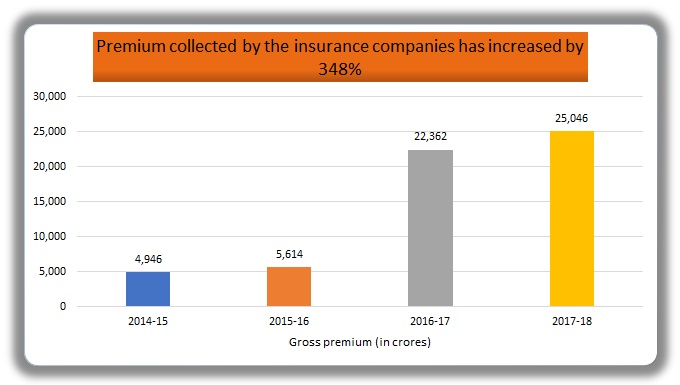 Source: RTI response of the Ministry of Agriculture and Farmer’s welfare dated October 10.

Farmers express no confidence, but premiums continue to increase

So, under the PMFBY, gross premium collected increased by Rs 36,848 crore or 348%, but the coverage has remained pretty much stagnant.

In 2015-16, before the launch of the PMFBY, 48.55 million farmers in India were enrolled in the existing crop insurance schemes. By the end of 2017-18, two years into the PMFBY and despite insurance companies having collected Rs 47,408 crore as premium, the number of farmers covered by crop insurance has increased by only two lakh, or 0.42%.

Signalling that farmers’ initial expectations regarding the benefits of the scheme were not met, a large proportion – of those who could, since enrolment in PMFBY is compulsory for farmers who take crop loans – opted out.

Similarly, the total crop area insured has increased from 46.39 million hectare to only 49.04 million hectares after the implementation of the PMFBY. And as in the case of number of farmers insured, the coverage area also declined between 2016-17 and 2017-18.

Compare this with the target that the Modi government had set for itself – bringing 100 million hectares under PMFBY by 2018-19. The target remains as far as it was when the scheme was initiated. 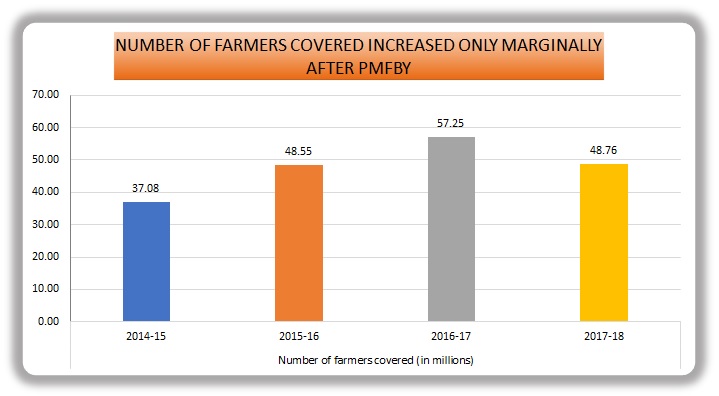 Responding to a question in the Rajya Sabha in August, the minister of agriculture and farmer’s welfare admitted that there had been a decline in coverage. He stated that “announcement of Debt Waiver Scheme in Maharashtra and Uttar Pradesh, farmer’s perception of mitigated risk in 2017-18, which was a good monsoon year, deduplication due to Aadhaar being made mandatory for coverage etc.” were the reasons.

According to Siraj Hussain, former agriculture secretary and now a senior fellow at the think tank ICREAR, more detailed analysis of data at the state level is required to pinpoint why premiums have increased. “We have to look at data and analyse the state and the crops where the premiums have increased. But, in principle, if you add more conditions e.g. cover for crop damage due to stray animals and penalties proposed in PMFBY modified guidelines 2018, the companies are likely to take such factors into account while quoting the premium rates,” he told The Wire.

Claims paid increase marginally, but delays are a major cause for concern

In the two years that PMFBY has been in place, total claims paid to farmers have increased only marginally, despite the total premium having increased by more than 4.5 times.

Thus, the surplus for insurance companies till that date is Rs 15,795 crore, almost a third of the premiums collected.

Also read: The Farm Widow: A Suicide and a Life Left Behind

The RTI response, on which our analysis is based, is dated October 10, over four months after the rabi harvest ended in May. According to the PMFBY guidelines, claims should be settled within two months of harvest. Recently, the government also announced that it would impose a 12% penalty on insurance companies which delay payments.

Despite this, the Ministry of Agriculture and Farmer’s Welfare, as of October 10 2018, could not even provide the figure for estimated claims for the 2017-18 Rabi season.

Crop Insurance Scheme by on Scribd

One of the key complaints of farmers with the PMFBY, as The Wire has reported earlier, has been that their claims are not settled in time.

Farmers argue that if their crop suffers damage in one of the sowing seasons, it means that they have not earned any surplus for that particular season. Consequently, they are short of cash to sow for the next season. Crop insurance can be useful if the claims are paid to farmers before sowing for the next season begins.

“See, if the rabi crop is damaged then claims need to be paid before the kharif sowing takes place. Otherwise how will the farmer sow?” said Vikal Pachar, who has been leading farmers in Bhiwani and Sirsa in their struggle against ICICI Lombard since February this year for settlement of their claims pertaining to kharif 2017.

A recent performance evaluation of the PMFBY by the Indian Institute of Management (Ahmedabad) concluded that the financial management of the scheme needs to be tweaked to “ensure companies do not make super-normal profits”. 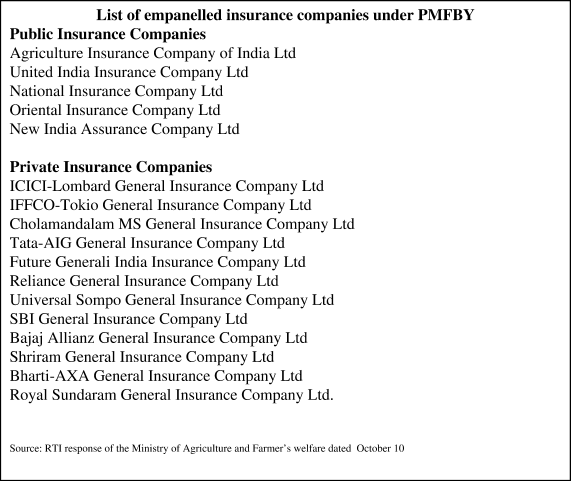 The report, supported by the Ministry of Agriculture and Farmer’s Welfare, also noted that “too many insurers (18 in 2017-18) have been empanelled”.

“Many of them do not have adequate experience and infrastructure and intent of servicing public good,” it said. The report also added that in the future it would be “advisable” to restrict the number of empanelled insurance companies to just ten for “better monitoring and administration”.