The number of farmers covered by the crop insurance scheme declined 15% last year. As the settlement of claims continues to be delayed, experts call for the scheme to be disbanded. 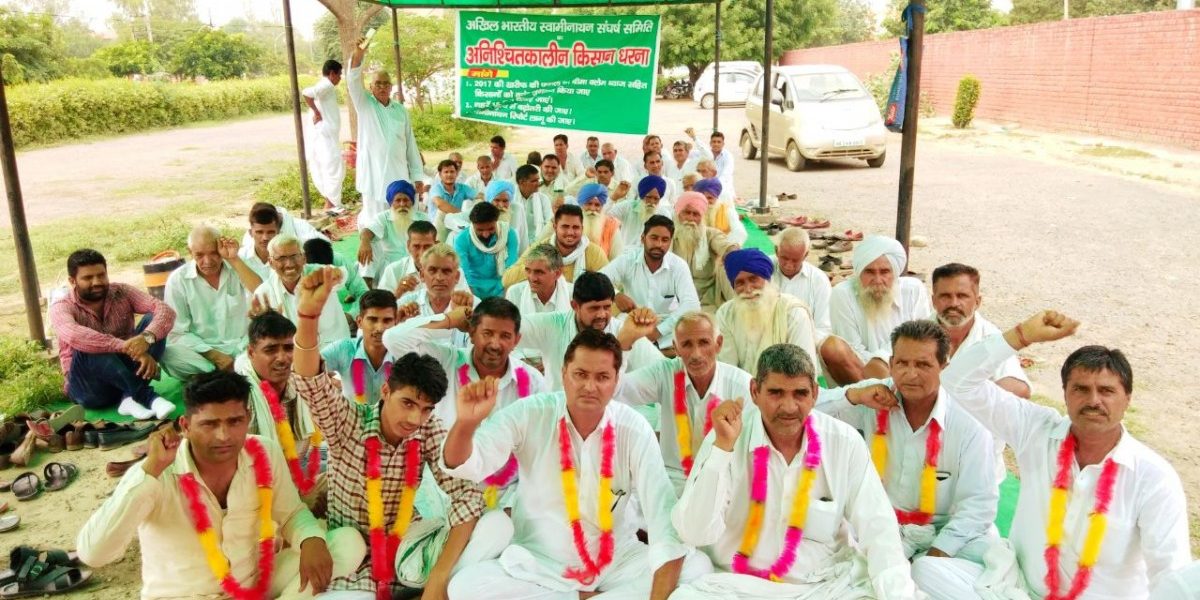 Farmers at the sit-in protest in Sirsa. Credit: Special arrangement

New Delhi: The Pradhan Mantri Fasal Bima Yojana (PMFBY), Prime Minister Narendra Modi’s flagship crop insurance scheme, was launched on January 13, 2016 replacing two existing schemes – the National Agricultural Insurance Scheme (NAIS) and Modified National Agricultural Insurance Scheme (MNAIS). The government announced that the new scheme incorporated the best features of the previous schemes and weeded out their shortcomings. Lower premium rates for farmers at 2% for kharif crops and 1.5% for rabi crops – the rest being payed by the state and Central governments to insurance companies – and the use of technology for ‘quicker settlement of claims’ were highlighted as some of the key features of the scheme.

However, as the deadline set by the government is approaching, the target is unlikely to be achieved. In fact, according to the latest figures provided by the government, the crop area covered by insurance is actually declining.

The PMFBY is compulsory for farmers who take crop loans and Devinder Sharma, a noted agriculture policy expert, argues that if the scheme were not compulsory it would hardly find any takers. “People will opt for a scheme only if it is beneficial to them. Farmers have clearly seen that the scheme is not giving them any benefit and they will not opt for it if it isn’t compulsory,” he said.

Looking at the data for loanee and non-loanee farmers under PMFBY, Sharma’s argument appears to have some truth to it. In 2017, 76% of farmers covered by crop insurance were those who enrolled by virtue of having taken loans. Only 24% farmers enrolled for PMFBY voluntarily.

“And a large part of the reduction in enrolment figures for this year would be because non-loanee farmers have not enrolled,” Sharma said.

The primary grouse of farmers with the PMFBY is regarding the payment of claims. Some farmers, like in Maharashtra’s Beed district, have complained that they have received minuscule amounts ranging from Re 1 to Rs 5 as compensation for crop loss. In Karnataka’s Bidar, farmers have threatened to commit suicide as they claimed that they have not been compensated for crop damage. Others have complained about inordinate delays in the payment of compensation.

The recent case of farmers in Haryana’s Sirsa and Bhiwani is instructive. Farmers suffered large-scale damage to their kharif crops – primarily cotton in Sirsa and bajra in Bhiwani – in 2017 due to the deficit in rainfall. Despite having submitted their claims in time, farmers are yet to receive compensation even as the time for sowing for the next season is almost over. Insurance companies – ICICI Lombard in this case – ought to have settled the claims by January this year.

Vikal Pachar, a farm leader in Haryana, argues that crop insurance is useful only if compensation is received in time, before the next sowing cycle begins. “If a farmer has suffered crop damage, he hasn’t been able to earn anything from that season. So it should be understood that he doesn’t have money to invest in sowing for the next season. Therefore, the idea of crop insurance is to compensate the farmer in time so that he is able to sow in the next season. Otherwise, what is the point of paying the premium?” Pachar said.

Farmers effected in Sirsa and Bhiwani have been attempting to reach ICICI Lombard since February but have not succeeded. “We could not find any representative of the company for several months. Then, with the help of the local administration we reached someone at the company who assured us that the claim will be settled,” said Jagdesh Singh, a farmer from Rupawas in Sirsa.

Farmers at the sit-in protest in Sirsa. Credit: Special arrangement

According to farmers, the company gave repeated assurances, set deadlines and gave new assurances with new deadlines as each deadline was missed. Then, farmers began a sit-in protest outside the district collectorate in Sirsa on August 6. Earlier this week, the company told the local administration that the farmers’ claim of Rs 390 crore is disputable and higher than the amount of losses. Now, the matter will be taken up by the ‘Technical Advisory Committee’.

“The claims have already been delayed over 8 months and now they have set up a committee. This is how the crop insurance scheme is working. It is doing more harm than good to farmers,” said a frustrated Pachar. Farmers are continuing their sit-in protest in Sirsa.

Responding to a question in Lok Sabha in the monsoon session, the government admitted to delays in the settlement of claims. For the kharif 2017 season, 40% of claims remain unpaid across the country.

The government has recently issued fresh guidelines for PMFBY which includes a provision where insurance companies that delay the settlement of claims by over two months will pay farmers the amount due plus 12% interest.

But according to Devinder Sharma, the PMFBY has proved to be a total failure and tweaks are not going to help. “The scheme needs to be disbanded entirely. Its design itself is faulty. It is helping the insurance companies only and is of no benefit for farmers. We need to disband this scheme and come up with a fresh approach,” he said.

Social scientist and president of Swaraj India Yogendra Yadav, who is also leading a grassroots farmers’ movement, agrees with Sharma. “There is no harm in admitting to a mistake. After spending so much money, we are back to square one. This scheme has achieved nothing,” he said.