The market price for each crop is lower than the minimum support price in five states, says a fact-finding report by farmer organisations. 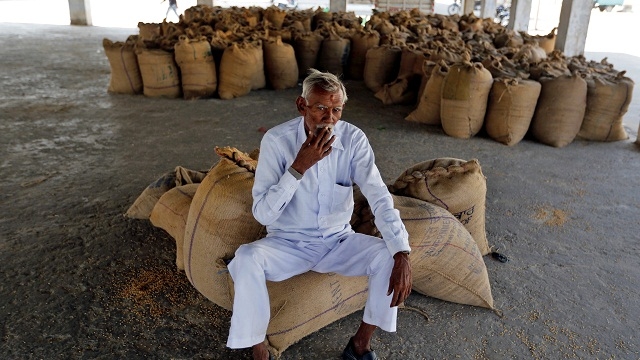 The more basic question that needs to be asked is whether farmers are able to benefit from the MSP declaration at all. Credit: Reuters/File

A fact-finding team comprising six farmer organisations, after visiting several mandis across the country in the last 10 days, has discovered that farmers are not getting the minimum support price (MSP) guaranteed by the government. “At not a single one of the nine mandis in five states were farmers able to sell any crop at the government-mandated MSP,” an interim report compiled by the fact-finding team stated. The report also estimated — based on modal prices from the government website agmarknet — that if farmers continue to be denied MSP, the loss to farmers in rabi season alone could amount to Rs 14,474 crore.

A team comprising representatives from several farmer organisations participating in the fact-finding mission travelled to Karnataka, Andhra Pradesh, Telangana, Rajasthan and Haryana to ‘find out at the ground level the truth about the price being realised by the farmer and the efficacy of the government procurement system’. The MSP Satyagraha — as the mission is being called — is being led by the Swaraj Abhiyan — a political party founded by Yogendra Yadav and Prashant Bhushan in 2015.

Speaking in Delhi on Saturday (March 24) at the release of the interim report, Yadav said, “The market price for each crop is lower than the MSP. Farmers are being looted by various methods. Government only starts procuring several days after the crop starts coming in. Farmers cannot afford to wait. They sell to traders who take advantage of their situation. Then, there are not enough procurement centres and the few that are there, are oddly located.”

“So, there are several problems with the procurement system and the government has done nothing to address these,” Yadav added.

The team also looked at data from agmarknet and found that in March, the modal price for five rabi crops was below MSP in most states. For gram, it was estimated that the loss in the current rabi season could amount to a whopping Rs 6,569 crore. “The total loss in the rabi season alone, on a conservative estimate, could be Rs 14,474 crore. Price in the mandis have been coming down year-on-year. Farmers are being looted by being denied even the MSP,” said Avik Saha, national convenor of Jai Kisan Andolan.

There has been a good amount of debate — also in these pages — on the adequacy of the MSP declared by the central government. But, as the MSP Satyagraha has discovered, even more basic questions need to be asked on whether farmers are able to benefit from MSP declaration at all.

“Forget about the MSP announcement. Even if a higher MSP is announced, do the farmers benefit from it? As we found out, the answer is no. Many farmers are not even aware of their right to sell at MSP. At many places, traders buy from farmers at low prices and then they sell to the government at MSP and take the benefit that actually belongs to the farmers,” said Yadav.

Phase two of the MSP Satyagraha will begin on Sunday from Uttarakhand and go on to Uttar Pradesh and conclude in Madhya Pradesh.