The Swaminathan Commission was clear in its recommendations, and the rationale offered by the NITI Aayog to rule out the use of comprehensive cost is dubious at best. 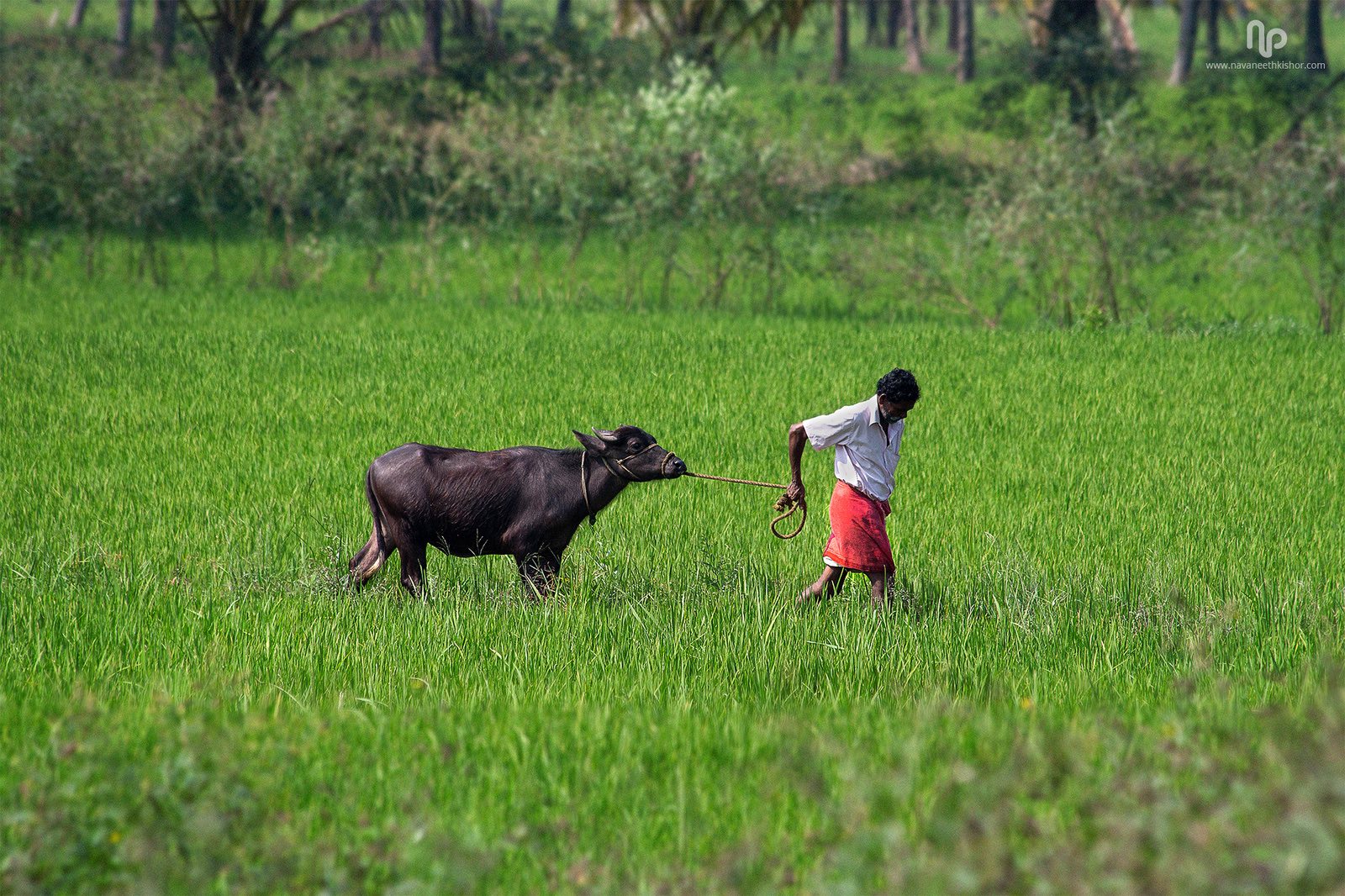 The umbrella scheme has been extended beyond the 12th Plan period that ended last March. Credit: Navaneeth Kishor/Flickr CC BY 2.0

Finance minister Arun Jaitley had announced in Budget 2018-19 that his “government has decided to keep MSP [minimum support price] for the all unannounced crops of kharif at least at one and half times of their production cost”.

What primarily added to this confusion is that Jaitley had not clarified one way or the other in his Budget speech.

Consequently, many commentators started arguing that this confusion was probably real. For instance, senior journalist Harish Damodaran wrote that the National Commission on Farmers (NCF), headed by professor M.S. Swaminathan, which gave the original recommendation, had never specified the cost over which there should be a 50% premium.

Perhaps trying to build on or clarify this ‘confusion’, Ramesh Chand, a member of the NITI Aayog, suggested that the government will not be using C2 cost, but [A2+FL] costs for the fixation of MSP in 2018-19. Chand is quoted in the Economic Times as saying:

“In my view, the government will take A2 plus FL, to give margin of 50% for consideration of MSP. The rationale for this is that rental value of own land which is included in C2 is not incurred by 88% of the farmers.”

Jaitley himself, finally, gave the clarification. Speaking in parliament on February 9, he stated: “My understanding is that this will be over [A2+FL] cost of production.”

The curious thing is that there was never any real ‘confusion’ on this matter.

The NCF was constituted in 2004 in the background of suicides by thousands of farmers across the country, and the larger agrarian distress that was sweeping the countryside. Five reports were submitted to the government between December 2004 and October 2006. The recommendation related to the fixation of MSP appeared in the fifth report titled ‘Serving Farmers and Saving Farming: Towards Faster and More Inclusive Growth of Farmers’ Welfare’. Over different parts of this fifth report, the NCF refers to the importance of MSPs to ensure viable farming. On page 57 of the report, the recommendation is provided that:

“Expand the MSP system, based on the cost of production including reasonable rate of return on investment and ensuring a prompt and open-ended purchase for all major crops.”

On page 63 of the report, there are two recommendations:

“Announce the MSP for a wide range of crops of importance to PDS [public distribution system] before sowing, taking into account the recommendations of CACP”; and

The key recommendation that we are currently discussing appeared on page 256:

“The Minimum Support Price (MSP) should be at least 50% more than the weighted average cost of production. The “net take-home income” of farmers should be comparable to those of civil servants.”

According to Damodaran, while the NCF report spoke of the “weighted average cost of production”, it did not specify what it should contain.

What he ignores is that the NCF report itself, as well as presentations based on the NCF by Swaminathan, had indicated that the “weighted average cost of production” referred to in the fifth report was the C2 cost.

For instance, there is a detailed empirical discussion on page 74 (Annexure 2.2) of the fifth report. Comparing data on [A2+FL], C2 and MSP for 2005-06, it was noted: “C2 cost (cost of production per quintal) is not covered by the MSP in most States for the 12 crops”. In page 84, this discussion is summarised in the sentence: “It would be extremely unlikely that in long run farmers would continue to cultivate those crops where the C2 costs are not recovered.” The recommendation on the 50% hike in page 256 was based on such a detailed discussion on the non-recovery of C2 cost.

The Swaminathan Commission mentioned that they were referring to C2 cost when making their recommendation. Credit: Navaneeth Kishor/Flickr CC BY 2.0

If doubts still remain, one may refer to another document of the NCF. On October 4, 2006, when Swaminathan met the Union minister for agriculture to submit the fifth report, he had given a PowerPoint presentation summarising his recommendations.

The 22nd slide of this presentation, a copy of which is with this writer, was titled “Assured and Remunerative Marketing”. The first point in the slide (see screenshots below) was: 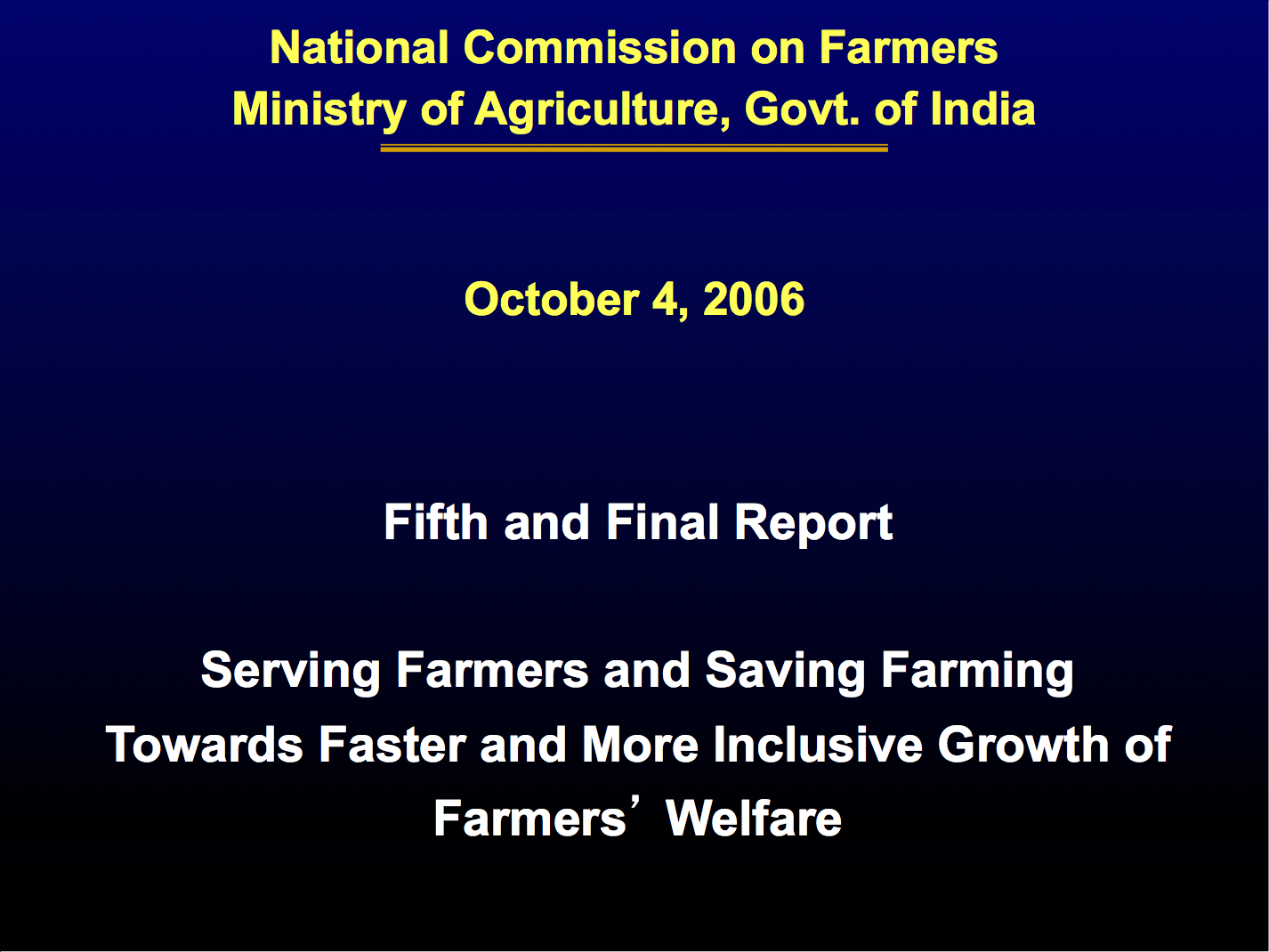 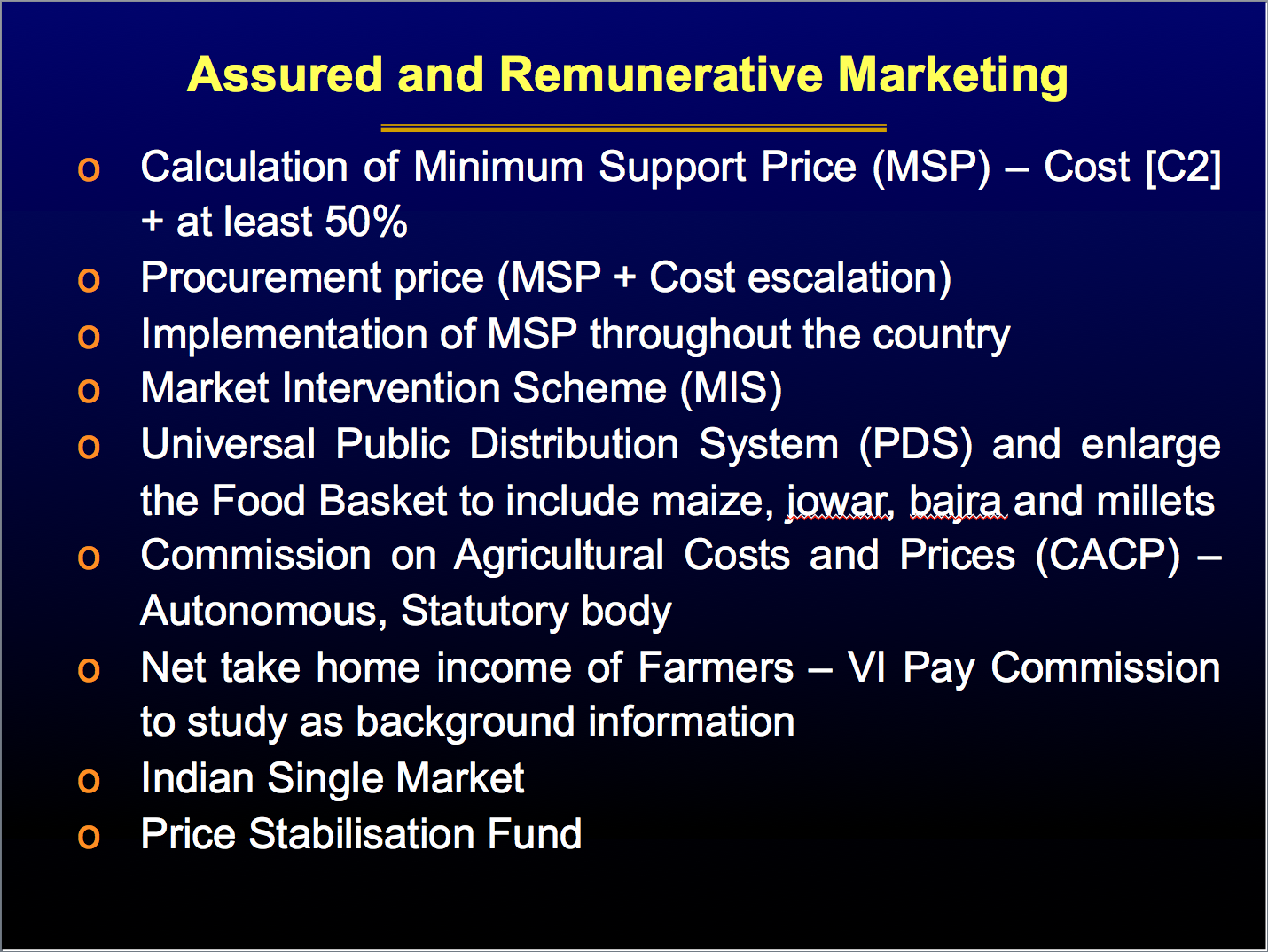 Swaminathan had also tweeted out his formula on September 28, 2017.

MSP should be C2+50% with procurement, storage & distribution. Agri policies must base on conservation, cultivation, consumption, commerce

One hopes that the “confusion” on the cost concept recommended by the NCF is put to rest. There is no confusion – it was C2 plus 50%.

Finally, the economic rationale offered by NITI Aayog’s Chand to rule out the use of C2 cost is dubious at best. That 88% of farmers do not lease in land is no reason to not consider rental value of owned land as an imputed cost. An imputed cost is an opportunity cost. An opportunity cost, by definition, is not an actual paid-out cost. For a farmer cultivating own land, the land could always be not self-cultivated and rented out, thus earning a rent. This opportunity cost is in no way dissimilar to the imputation of family labour at the market wage rate. In the latter too, the farmer is not actually earning a wage outside the farm; yet, it constitutes a wage lost because the farmer forgoes it and chooses to cultivate his/her own farm.

That Chand would allow one opportunity cost to stay (the imputed value of family labour) and not another (the rental value of owned land) makes very poor economic sense. Jaitley appears to be following this flawed economic rationale.