Measures like MSPs are key to the survival of the mountain populace at present. However, mainstream media and remoteness has made it impossible for people in the hills to mobilise over this. Shimla: “When someone is in pain,” Harpreet Singh panted as he was whisked away by the Shimla police just a week before the famers’ parade on Republic day, “they go to their own people for support.”

He, along with two other farmers from Singhu border, had come to Shimla to spread awareness about their ongoing struggle.

Even before they could unfurl their banner at the famous Ridge Maidan in the capital of Himachal Pradesh, the police arrested them and shoved them down the Mall Road to the police station. Harpreet Singh said, “This is a government that does not want people’s voices to be heard – a government that curbs the right to speech”.

Media persons present at the spot asked why Singh and two other farmers were being treated like a “security threat”. In the context of the western Himalayan region though, the more compelling inquiry that regional media has not made so far is, “What have pahari or hill farmers on tiny terrace-fields got to do with mainland farmers’ cause?”

The BJP-led Himachal and Uttarakhand governments have vehemently supported the three new farm laws, which the farmers’ agitation is demanding be repealed. The media has created the narrative that the lack of Minimum Support Price for certain commodities concerns neither the subsistence mountain farmers nor the ‘progressive’ fruit growers in the region. 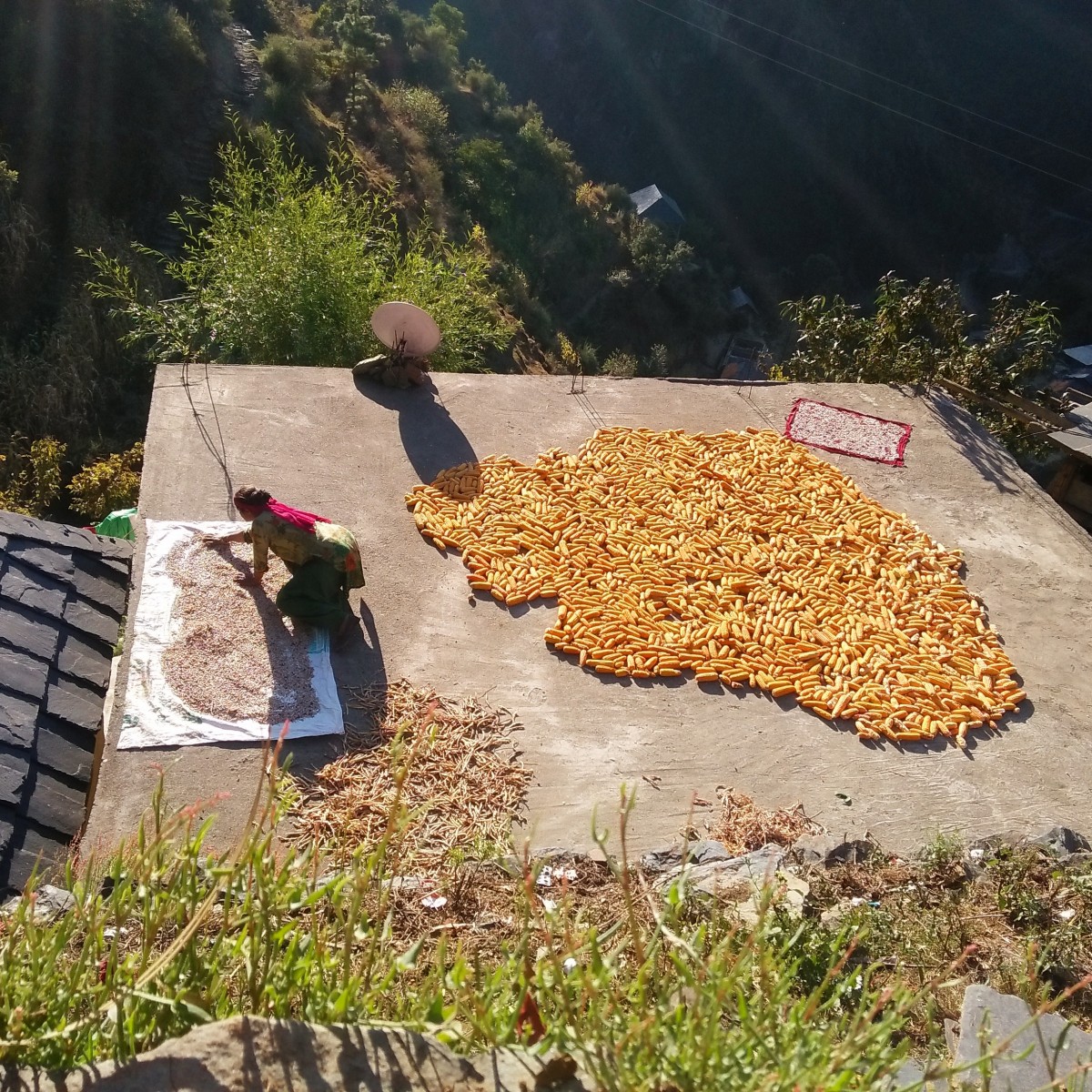 The dominant narrative that this movement is limited to a few large landholders from Punjab and Haryana, has been challenged on multiple fronts since the agitation began.

One of the key arguments in favour of MSP zeroes in on the critical question of food security – that secure MSPs enable the government to procure food grains directly from sarkari mandis and then distribute them at subsidised rates through the universal Public Distribution System (PDS). This is a fact that Himachal Pradesh, and its neighbouring mountainous regions, cannot afford to overlook.

Himachal Pradesh is not only one of the states with the highest percentage of PDS using households (90%) in the country, but according to the India Human Development Survey, the percentage of heavily dependent households (who get more than 70% of their grains from PDS) is greatest here, comprising 33.2% of the state’s population.

Another study indicates that in Uttarakhand, the percentage of ‘Below Poverty line’ cardholders among ration cardholders is 45%. Himachal’s population depends heavily on the PDS in both urban and rural areas. Photo: Manshi Asher

A large number of almost landless or small landholders belong to Dalit communities in Uttarakhand and Himachal. Even for the ‘Above Poverty Line’ cardholders in Himachal, with a well-functioning PDS, ration items like rice, wheat flour, pulses, sugar, kerosene and oil are comparatively more affordable than buying from the open market and are commonly used to supplement food supplies through the year. The imminent threat, with the end of MSPs and the government’s simultaneous push for direct cash transfers, to replace distribution of food, is of consumers being forced to purchase food at market rates.

A ‘State of Himalayan Farming and Farmers’ report published by the Integrated Mountain Initiative in 2018 highlights that “only 15% of the farmers in the north-west Himalayas are producing enough food for themselves”.

Mountain terrains are mostly covered with forests, pastures and rocky outcrops. The nature of the soil and low landholding size (averaging at one hectare or less per family) has always been a limitation for adequate grain production.

In the post-Independence era, land reform measures in states like Himachal, as well as the policy push to develop horticulture, supported the farm-based economy.

But conditions for subsistence, mountain, forest and farm-based livelihoods only became more unfavourable. Fragmentation of land into small farms has affected yields. In addition, transition from traditional crops like millets and barley to cash crops (like apple and vegetables), younger generations moving out of non-remunerative subsistence farming, along with the weakening of a livestock rearing economy – these are trends that have emerged with state-driven, and in recent decades, neoliberal market interventions. 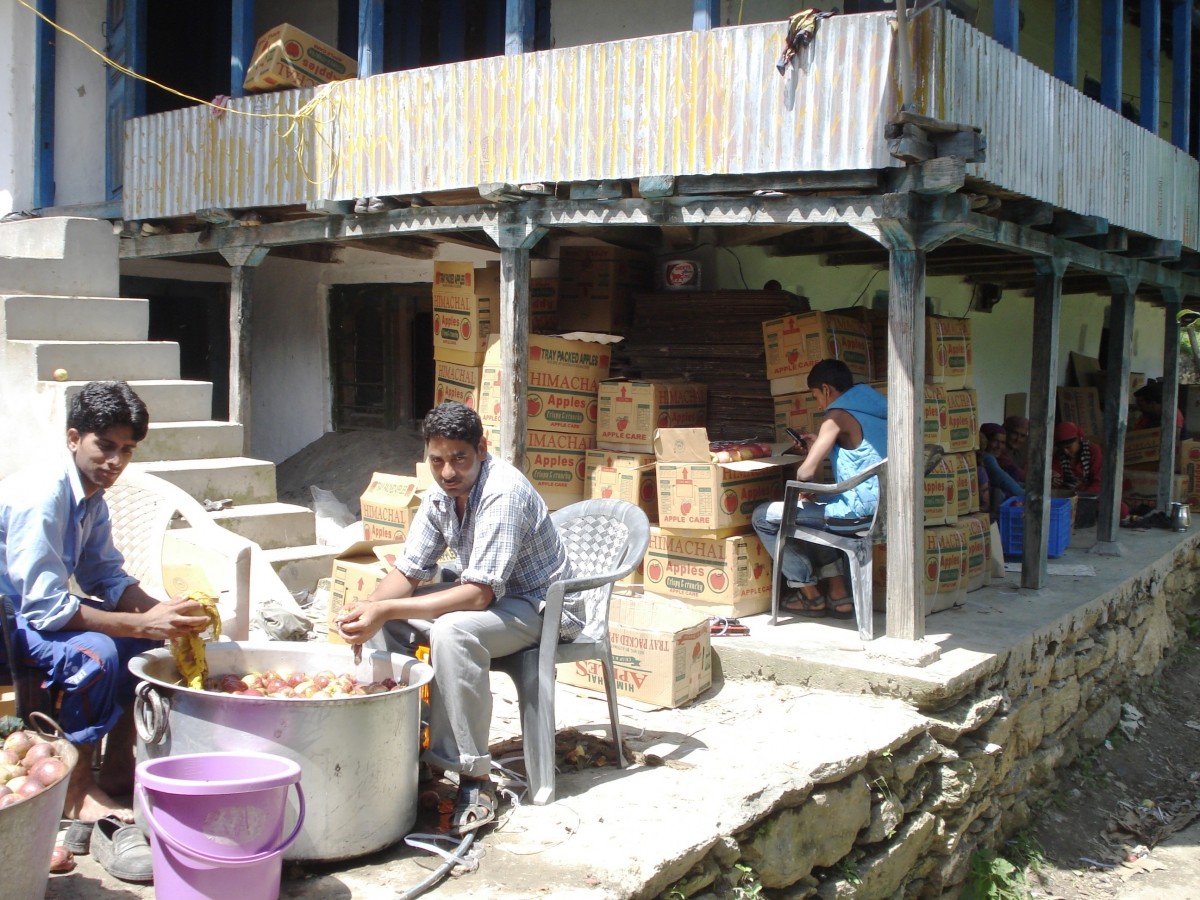 The availability of subsidised food grains from the plains facilitated the move to commercial fruit and vegetable production and continued to keep the farming sector at the centre of the mountain economy.

However, horticulturists too are vulnerable today. They are left to the vagaries of the market and, in recent years, the weather.

Increased warming, erratic rainfall patterns, hailstorms and floods due to the climate crisis makes even commercial farming a precarious livelihood option with dwindling profit margins. In Himachal, the primary sector’s contribution to the state gross domestic produce has seen a sharp decline in the last few years, going from 14% in 2012 to 9.40% in 2017. The policy thrust on tourism and service sectors has meant that farming became even less lucrative.

In the year of the pandemic and resultant lock-down, access to labour and markets was compromised. As a result, horticulturalists in the mountains suffered immensely.

In the wake of the crisis, Himachal’s fruit and vegetable producer unions and organisations stressed time and again for the need for MSP for their produce. While the present system is already in disarray due to market pressures and lack of protection for farmers, the current regime’s ‘reforms’ which promise relief from ‘middlemen exploitation’ will ultimately expose them to bigger risks. At present, procurement of fruit produce includes APMC mandis, private vendors and even big companies like Adani and ITC.

Fruit growers are well aware that weakening of the APMC mandis would mean a corporate monopoly, and thus an adverse impact on prices. Environmentalists are often critical of the trajectory of the mountain states’ dependence on the state and markets for food and livelihoods. In the long run, given the concerns around ecology and sustainability, we argue that ‘food sovereignty’ and not just ‘security’ needs to be the goal. This requires strengthening of agroforestry, pastoralism and revival of traditional crops apart from several structural changes.

Having said this, protective measures like PDS and MSPs remain the key for survival of the mountain populace at present.

Yet, barring protests led by Left-leaning farmer’s organisations, opposition parties and few social activists, there is a lull on this issue in the hills.

The reasons could be multiple: the direct implications of the three new laws are difficult to comprehend for common people, especially when the mainstream media reportage is pro-government and against the farmers’ agitation. Plus, the difficult conditions of the mountain regions marked by remoteness as well as the harshness of day-to-day life makes organising more tedious. Most importantly, critical voices tend to be drowned out because the actual numbers of mountain farmers (population) is smaller. In the larger scheme of things, it is the vast population concentrated in the ‘bread-basket’, the northern plains, who were bound to be the front-liners in this battle. This does not mean, though, that this struggle is theirs alone.

The ‘food bowl’ of the country runs parallel to the Himalayas with deep geographical, ecological and cultural connections. The Indus and Ganga rivers – originating in the Himalayas – gave birth to and nurtured the fertile Indo-Gangetic plains with their rich sediments and perennial waters.

On the Indus river-powered plains arose diverse cultures, religions, agrarian and semi-industrial economies and trade. From the ancient to the feudal, from the colonial to the modern nation state, each era has contributed to the evolution of shared social and political vulnerabilities of these two distinct but interconnected landscapes and the people who inhabit them. Fields submerged in the backwaters of Tehri Dam in Uttarakhand Photo: Sumit Mahar

Let us remember that the green revolution was ushered in by building large dams like Bhakra, Pong and Tehri on the Himalayas rivers.

Thousands of families in Himachal Pradesh and Uttarakhand were displaced by these mega projects which swallowed precious farms and forests. Resistance was silenced in the name of national interest. Their ‘sacrifice’ was sought on the promise of a ‘greater common good’ for generations to come.

Be it the mountain farmers, who gave up their homes for this good, or those in the plains who were forced to take their lives over the recent decades of the agrarian crisis – their families are living testaments of a shared deception by the failed promise of ‘development’. A development that, inch by inch, is privatising resources and wealth in the hands of a few. Delhi’s borders are reverberating with voices against a blatant takeover, calling the state to account for many shared sacrifices.

The farmers from the Singhu border were in Shimla to bring home this message. To their own people.

Manshi Asher is a researcher-activist associated with Himdhara Collective based in Himachal Pradesh.