Instead of dismantling the regulated APMC mandis, the government needs to make them stronger and build supporting infrastructure like warehouses. 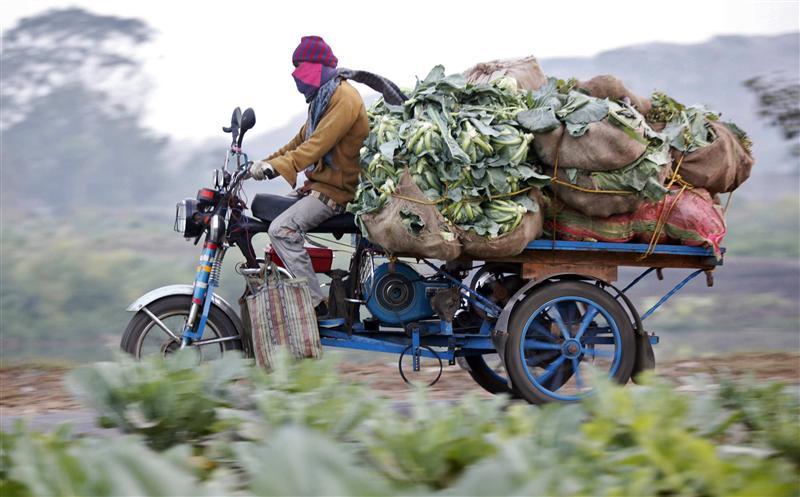 A farmer transports vegetables on an improvised tricycle towards a wholesale agricultural market in Kolkata. Credit: Reuters/Rupak De Chowdhuri

It happened in 2003. The Atal Bihari Vajpayee government allowed private companies to purchase wheat directly from the farmers. Major global trading companies, including Cargill, Australian Wheat Board, Bunge and Louis Dreyfus, went on a buying spree. What happened as a consequence was in a way reminiscent of the dark days of the Great Bengal Famine in 1943. With the private sector diverting the food supplies and eventually exporting it, millions of people were deprived of food.

Not left with enough wheat to meet the public distribution requirement, the then food and agriculture minister Sharad Pawar (after the UPA government was sworn in in 2004) had no other option but to resort to wheat imports. By the end of 2005-06, India had imported nearly 80 lakh tonnes of wheat at almost double the price it paid to domestic wheat growers, creating a furore within the country. That was the biggest food import by India after the days of the Green Revolution. Realising their mistake, the UPA government in 2007 quietly withdrew the model Agricultural Produce Marketing Committee (APMC) Act, which many had considered to be a big market reform.

The new agricultural market reforms with the catchphrase ‘one country, one market’, which the government is now planning to introduce, are not much different. Aimed at creating a common agricultural market, they harp on the same failed principles of improving efficiency and raising farm incomes by the increased application of information technology, thereby apparently bringing in transparency. Freeing up trade in agriculture produce by giving farmers a wider choice of markets means setting up private markets, which primarily hinges on slowly and steadily dismantling the 7,700 APMC mandis that exist.

First, let us look at the dominant argument that it is overregulation by APMC mandis and the formation of local trade cartels that actually limits the price received by farmers. What is not being said is that it is actually the payment of the minimum support price (MSP) at the APMC mandis that provides farmers with an assured price. Prices will otherwise crash, forcing farmers to resort to distress sales. In Punjab, which has a network of well-established APMC mandis, come what may, wheat farmers are able to get the MSP of Rs 1,625 per quintal. In Bihar, where there are no APMC mandis since 2007, the best price farmers get is around Rs 1,100 or Rs 1,000 a quintal. What Bihar therefore urgently needs to do is to set up APMC infrastructure.

The electronic National Agriculture Market (eNAM) has the underlying objective of helping farmers access markets across the country. So far, 417 mandis in 13 states have joined the eNAM platform. Cutting across the hype, again what is not being said is that the story of the eNAM is similar to the now-defunct eChaupals. If you recall, eChaupals were introduced with aim of using information technology as an autonomous agent for change and hailed as the lone success story to bridge the information divide. Now no one even mentions the name eChaupals.

The eChaupals were launched in the year 2000 with much fanfare. I remember some popular magazines had even done cover stories claiming that eChaupals had ‘empowered’ farmers by providing information and removing ‘corrupt’ intermediaries. What was not said was that ITC-IBD, which operated eChaupals, was also an intermediary. Its underlying objective was to procure soyabean for the international value chain. Subsequently, it was established that notwithstanding the hype, the price ITC-IBD paid to soyabean farmers over the years was almost equal to what the traditional mandis were offering.

Nevertheless, by 2005, eChaupals had converted into a rural retail network of malls known as Chaupal Saagars to sell fast-moving consumer goods to villagers. The eChaupal debacle therefore has lessons galore that simply cannot be brushed aside. Dismantling the APMC regulated markets and bringing in instead eChaupals or eNAM networks suffers from the same ideological thinking. Let us also not forget that to up the ante, even eChaupals had received numerous awards and recognitions. That’s the way the dominant narrative is conveniently changed to favour private markets. Eventually, it is the traditional APMC-regulated markets that have proved to be the sole beneficiary to farmers. And let me make it very clear – if there was no APMC mandi network established, there would have been no Green Revolution.

Over the years, there is no denying that APMC-regulated mandis have turned into a den of corruption. The challenge therefore is to make these mandis more efficient and modernised, and of course evolve a management system bereft of political control and free of muscle power of the organised cartels that operate. In my understanding, having studied the agricultural markets both within and outside the country over the past few decades, what India requires is: