If the Meteorological Department had got their predictions right, farmers in Vidarbha and Marathwada say, they wouldn't have sowed their kharif crops when they did. 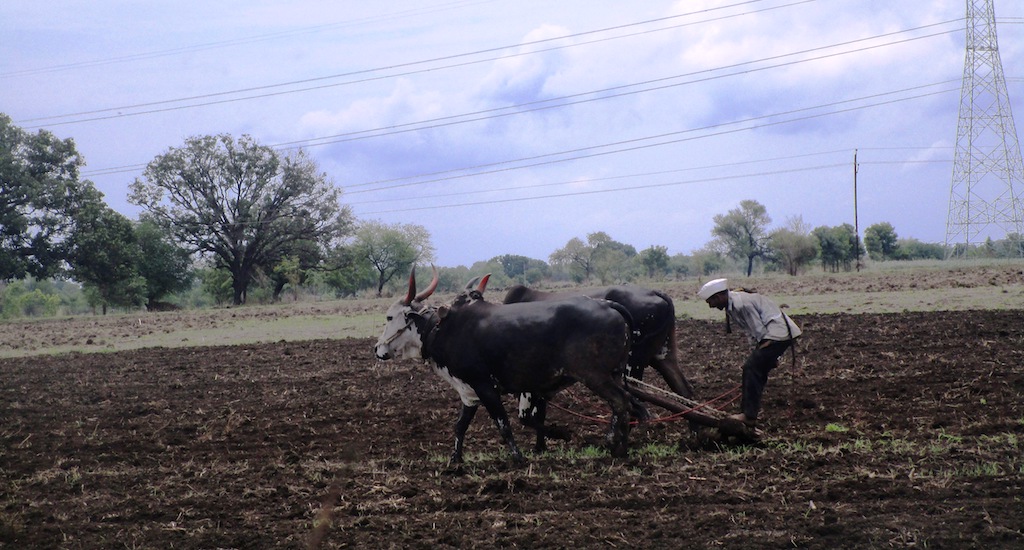 Marathwada farmers are fighting against all odds in the current kharif season. Credit: Nidhi Jamwal

Farmers in Maharashtra are furious, and their anger is directed towards the India Meteorological Department (IMD), the government agency responsible for weather forecasting in the country. On July 14, a group of farmers from Anandgaon village in Beed district of Marathwada filed a police complaint against the IMD for “colluding with seed and pesticide manufacturers and inflating the monsoon forecast figures”.

Meanwhile, Swabhimani Shetkari Sangathan, a state-level farmers’ organisation, has threatened to lock up the IMD office at Pune. Members of the organisation claimed the department had forecasted normal rainfall this year, but several parts of the state have received less rains and a long dry spell is threatening the survival of kharif crops such as soybean, cotton, pulses, etc.

“Latur and other districts of Marathwada received very good rains in the first half of June when sowing was undertaken. However, from June 16, there was a pause in the rains with scanty rainfall in some pockets. It’s been almost three weeks without proper rains,” said Venkat Balbim Bhise, who owns three acres of land in the Bhisewagholi village of Latur.

“If rains do not return in the next ten days, farmers may lose their kharif crops, as Marathwada has abysmally low irrigation facilities. I will lose my soybean crop,” Bhise said. He had planted sugarcane last October, but lost the entire crop when his only source of irrigation, a 550 feet-deep borewell, went dry. He has more than Rs 2 lakh in debt to repay to a private moneylender. 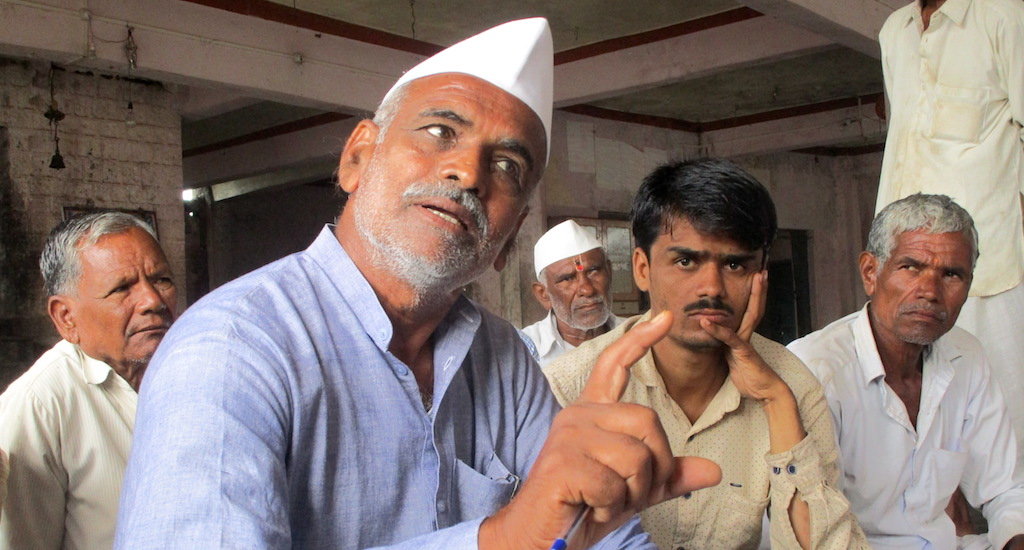 Sandipan Badgire, a farmer from Sonwati village, claims the chief minister’s advisory of delaying sowing is meaningless, as almost 85% sowing is complete in Latur district, and crops are drying due to a long dry spell. Credit: Nidhi Jamwal

Taking note of the long dry spell, state chief minister Devendra Fadnavis issued an advisory on July 9, almost a month after farmers in Marathwada had sowed kharif crops, asking sowing to be postponed till July 20. “The chief minister’s advisory is meaningless as almost 85% kharif sowing is complete in Latur district,” said Sandipan Badgire, a farmer and social activist from Sonwati village in Latur.

On May 29 this year, pre-monsoon rains started in the Marathwada and Vidarbha regions of the state. “Pre-monsoon is a transition between dry summer and wet rains of the southwest monsoon. This transition is often linked with lightning and thunder activity,” explained Akshay Deoras, a private weather forecaster and masters student at the Institute for Climate and Atmospheric Science, University of Leeds.

“In the first two weeks of June, Marathwada received largely excess rainfall and the farmers undertook sowing of kharif crops. However, those rains were not monsoon rains, but pre-monsoon. The IMD failed to convey this message to the farmers who are now staring at crop loss,” Deoras said.

According to him, the monsoon arrived in Marathwada and Vidarbha regions only after June 23. But, in several districts the rainfall has been erratic till July 15. For instance, as per the subdivision rainfall data with IMD’s Hydromet division, Marathwada received an excess rainfall of 181.9mm against the normal rainfall of 143.3mm between June 1 and June 30. However, majority of this rainfall was received in the first half of June, as pre-monsoon showers.

Ashok Jaswal, former scientist with IMD Pune said, “A rainfall of 181mm in a month looks good for semi-arid region of Marathwada. However, this rainfall is beneficial to crops only when it is distributed evenly throughout the 30 days period and not just 10-15 days as happened in Marathwada.” Excess rainfall in short duration not only destroys the crops, but also leads to soil erosion and washing away of pesticides and chemicals in run-off, he said.

Deoras agrees: “Cumulative rainfall data is tricky as crops need regular good rains… Marathwada and Vidarbha are statistically not showing deficient rainfall, but they have had a dry spell of over three weeks, which is extremely bad for the crops.” As of July 20, Marathwada has received a total rainfall of 253.3mm as against a normal of 250.6mm. Vidarbha cumulative rainfall is 350.1mm as against normal of 368.3mm. Three districts of Maharashtra — Parbhani, Amravati and Sangli — are showing a deficient rainfall between minus 59% and minus 20%.

The effects of water stress are already showing. “Because of an unusual long gap in rains, short-term crops like green gram and soybean are showing stunted growth,” said Mohan Gojamgunde, agriculture officer of Latur. “Water stress will reduce vegetative growth of the crop and push it into early flowering. This will lead to reduced crop yield.”

According to Gojamgunde, crop yield decline may vary between 15% and 50%, depending on when and how much it rains in the next few weeks. The agriculture department has directed farmers to do inter-cultivation (ploughing between the rows of crops) to improve soil aeration and avoid soil compaction. Farmers have also been advised to spray potash-based liquid fertilizer to help crops handle water stress, informed Gojamgunde.

The onset of southwest monsoon is crucial for the Indian farmers who depend on the rains to practice agriculture and eke a living. According to an article published in the Current Science, India ranks first among the countries that practice rainfed agriculture both in terms of extent and value of production.

Out of an estimated 140.3 million ha net cultivated area, over 57% area is rainfed, which contributes 44% of the total food grain production. Further, it is estimated that even after achieving the full irrigation potential, nearly 50% of the net cultivated area will remain dependent on rainfall. Rainfed agriculture thus supports nearly 40% of India’s population. 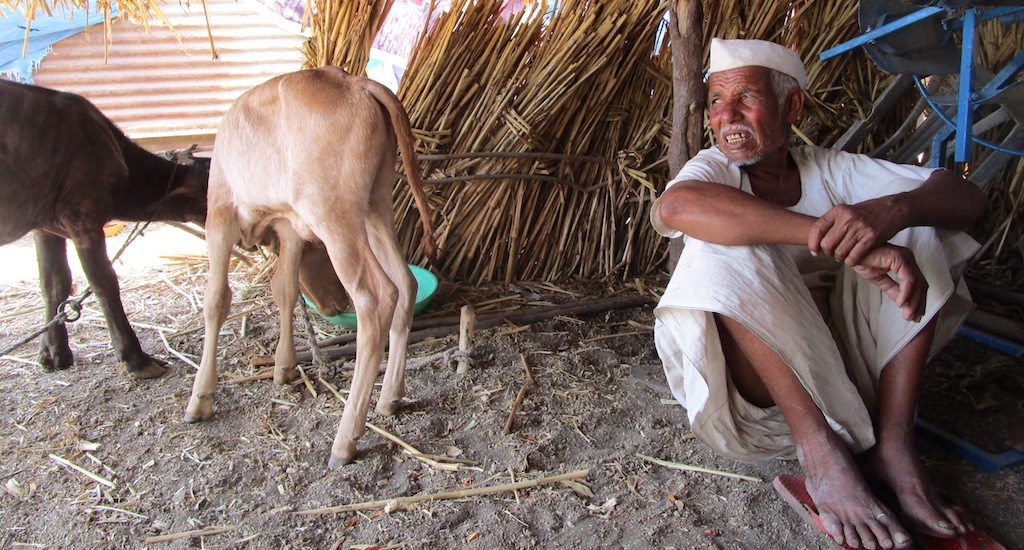 Farmers in Maharashtra are worried because they fear their kharif crop will be destroyed due to lack of rains. Credit: Nidhi Jamwal

Keeping in mind the strong link between monsoon rains and agriculture in India, the IMD’s Agricultural Meteorology Division issues agro-meteorological advisory service (AAS) bulletins at national, state and district levels. The state level advisory, issued every Tuesday and Friday, alerts farmers at district level about weather conditions in the next five days and advises them on sowing, cropping pattern, pest attack, etc.

But, farmers allege these advisories are often inaccurate and insufficient to help protect the crop. For instance, in March this year, Marathwada and Vidarbha received heavy rainfall and hailstorm that destroyed standing rabi crop over 80,000 ha area. But, the IMD did not alert farmers.

It was only on June 30 that the advisory recommended spraying potassium nitrate on crops to deal with water stress, and irrigating crops with sprinkler irrigation system. However, by that time, there was already a gap of 12-14 days in rains and sowing had started to fail.

Mid-July has brought some rains to Marathwada and Vidarbha due to the influence of monsoon low pressure. But, these rains are not uniform in terms of coverage. “In the last few days, we have received some rains, but need more rains to save the kharif crops,” said Badgire.

On July 18, the districts of Latur, Beed, Parbhani and Jalna received 13.8mm, 13.1mm, 3.8mm and 1.1mm rainfall respectively. “Regions with long dry spell need widespread rainfall of at least 100mm in a day to cope with water stress. Re-sowing will help only if there is an assured regular rainfall. But, extended range forecast models are hinting at the possibility of another dry spell in Maharashtra from July 21 onwards,” warns Deoras.

Under the Agromet system of IMD, there are 130 centres across India, mostly agricultural universities, who receive weather forecast from the IMD and pass it on to the farmers. “Till June 21, Marathwada had satisfactory rainfall. Rains started to subdue only after June 24… On July 7 we issued an extended range forecast, valid for next two weeks, advising no sowing in Marathwada for next 14 days,” said Chattopadhyay.

There is a multichannel dissemination system to inform the farmers, which includes an SMS alert. “Of the 1.34 crore farmers in Maharashtra, only 70 lakh receive SMS alert. There is a need to widen the network,” said Chattopadhyay. He also stressed on the need for a dedicated portal for farmers to keep them informed.

Jaswal claims there is a problem with medium-range forecast (next 5-7 days) of the IMD, which needs to be checked. “IMD has all the necessary tools, but accuracy is a problem. And, changing climate is making monsoon forecast more difficult,” he said.

According to him, several weather phenomena that are normally associated with monsoon in India have changed. “Earlier an off-shore trough used to form in west coast in the month of June, which used to spread right from Maharashtra to Kerala. It used to bring high-speed winds from Arabian Sea that would crash with the Western Ghats and bring heavy rains. This is missing,” said Jaswal.

Similarly, the strength of low-level jets (major high velocity winds in the lower troposphere) associated with the monsoon has weakened. “Marathwada and Vidarbha have received little rains in mid-July because deep depressions are not formed in the Bay of Bengal. Earlier, these deep depressions used to bring good monsoon rains in these regions of Maharashtra,” said Jaswal.

Clearly, rain-fed farmers in Maharashtra are in deep trouble. Both the Indian government and the IMD scientists need to strengthen their weather forecasting systems and ensure timely dissemination of information to the farmers. That is the least they can do in times of a changing climate.

Nidhi Jamwal is a journalist based in Mumbai.

The article was originally published on Village Square.