'Never Seen Anything Like This': Madhya Pradesh Farmers Reel from Locust Attacks

Government officials have attempted to spray pesticides on them before dawn, but to little effect. 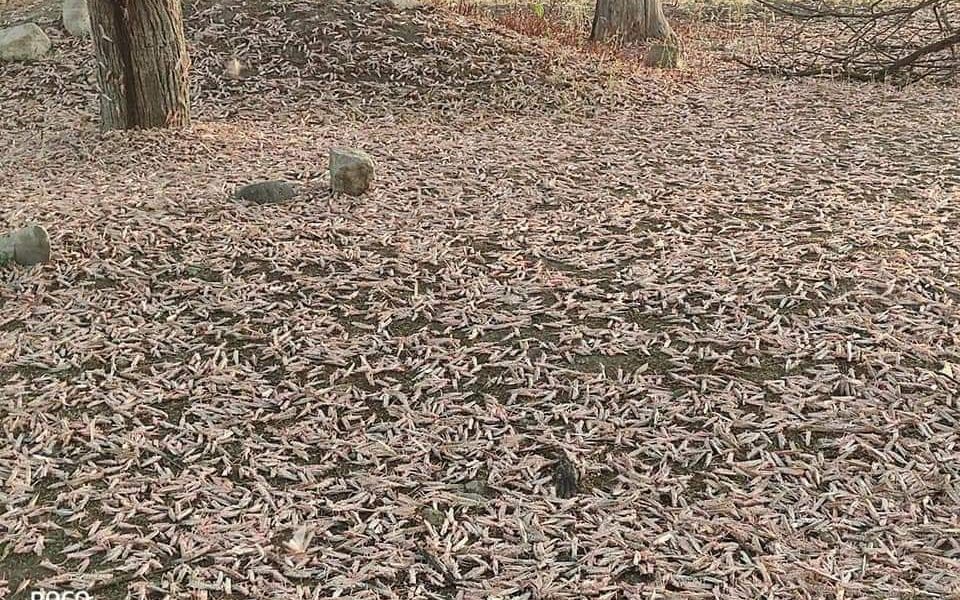 Locusts, after having been sprayed with pesticides. Photo: By arrangement

Bhopal: Nearly 10 districts in Madhya Pradesh are suffering from a massive locust infestation that is threatening crops at a time of harvest.

“This really is the worst time for locusts to invading farmland, because the framers are just ready with mustard, cumin, wheat, flowers and vegetables,” said Kedar Sirohi, leader of Aam Kisan Union.

Sirohi said there are photos circulating of locust swarms decimating ready harvest. “When they swarm in, they can eat all crops in less than a minute,” he added.

Locusts, which are part of the grasshopper family, can travel 93 miles a day, and each adult can eat its weight in food in the same time span.

According to United Nations’ Food and Agriculture Organisation (FAO), the international agency that monitors locust invasions across the globe, swarm of locusts, which contains about 40 million of them, can eat the same amount of food in one day as 35,000 people, 20 camels or six elephants.

Locusts, after having been sprayed with pesticides, in Madhya Pradesh. Photo: By arrangement

They migrate across different countries and cause extreme damage to crops. The countries which are affected by locust invasions pass on data about the attacks to the FAO. The collected information is analysed there in concurrence with the local weather conditions. The FAQ then forecasts future locust attacks.

The 10 affected districts in Madhya Pradesh are major producers of mustard, cumin, wheat, flowers, fruits and vegetables. They are Neemuch, Ratlam, Mandsaur, Shajapur, Ujjain, Dewas (the six districts of Malwa region), Hoshangabad, Harda (the two districts of Narmada region) and Sheopur and Guna.

On May 18, struck by the sudden arrival of the pests that can travel across different countries and cause extreme damage to crops, Ratlam district administration issued a note warning farmers of the district.

“It seems that locusts have entered in the state from neigbouring state of Rajasthan. In all likelihood, locusts are likely to enter in the district from neighbouring Mandsaur and Neemuch districts,” the note said.

As the locusts flies during day time and rests in the night, the farmers of the district were advised that if they came across locusts resting in the evening, they should plough field using cultivators in the night and level the ground. “If the ground is levelled, the locusts will die,” the release said.

The farmers are advised to beat objects that produce loud sounds, it added. Farmers have been trying their best.

“I have seen how they are storming into a field and how within minutes they eat fruit, vegetables and all that grows in the fields. I have never experienced anything like this, most of us don’t really understand how destructive these locusts can be,” Dileep Patidar, farmer and resident of village Udaa gaon in Mandsaur district told The Wire.

Governments are struggling to contain the fresh crisis.

According to B.S. Argal, Sub Divisional Officer (Agriculture) of Ujjain district, prior warning about the arrival of locusts in the district was given to the farmers on Monday. The locusts had reportedly arrived from the neighbouring Ratlam and Mandsaur districts.

On May 20, the joint team conducted an operation in village Ranakheda in Ujjain district of the Malwa region. In the pre-dawn operation, the team sprayed these locust swarms with pesticides for nearly two hours in the two-kilometre area of the village.

The villagers collected the dead locusts and set them on fire. However, these measures have not proven enough and farmers fear an even larger influx.