Thirty Years of Liberalisation: Can the Market Solve the Fears Behind Farmer Protests?

If economists have tried to sell the farmers the dream of higher prices, the farmers have been, understandably, more concerned with the risks of a crash in prices. 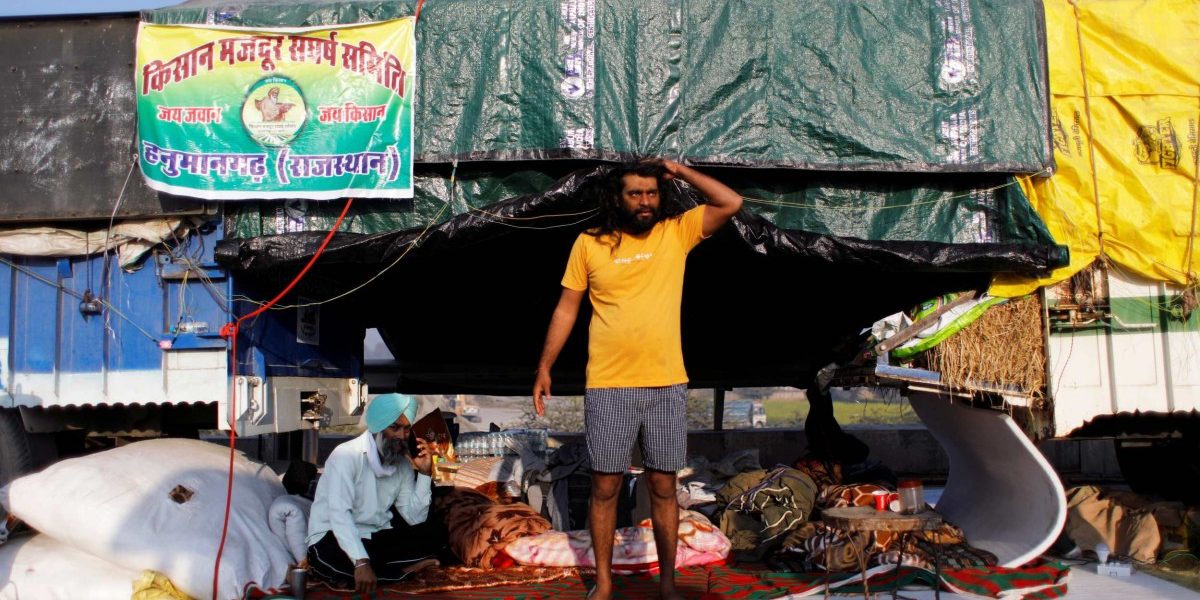 A farmer stands in front of a vehicle at the site of a protest against new farm laws, at a state border on a national highway in Shahjahanpur, in the desert state of Rajasthan, near New Delhi, December 26, 2020. Photo: Reuters/Adnan Abidi

This is the final part in a three-part series that outlines the processes of change that took place from 1991 and the crises that have emerged from it. Read ‘Part 1’ here and ‘Part 2′ here.

Liberalisation, in its initial decades, largely bypassed agriculture. The economic strategy was, till recently, largely to leave agriculture to its own devices. In this period the policy framework for agriculture largely stayed within the boundaries laid out during the Green Revolution.

This framework involved providing credit to farmers to invest in new technologies, with the output being procured by the Food Corporation of India (FCI) and sold through the Public Distribution System (PDS). This system served to tap the increased production in the Green Revolution areas of Punjab, Haryana and western Uttar Pradesh and distributed the output to food deficit regions elsewhere in the country. This system worked very well as long as there was a deficit and the PDS could sell all that was procured, but once an agricultural surplus emerged the FCI was left with unsold stocks contributing to a burgeoning food subsidy.

The internal pressures on state support for agriculture occurred at a time when there were more fundamental strains emerging in this sector. With each succeeding generation, farms were divided across all the inheriting members of the family. Cultivators had to make do with much smaller farms than their  parents. The smallest among them were pushed into agricultural labour, often leaving their land fallow as they hoped to fall back on its value when the family faced an existential crisis. With the net sown area being constant, and even declining in some states, agriculture could no longer absorb the increasing numbers of labourers.

The hard constraint on land limited the growth of agriculture at a time when other sectors of the economy had begun to grow at higher rates. Consequently, the share of agriculture in GDP had more than halved from 33% in 1990-91 to 13% in 2017-18. At the same time, as workers waited in their villages for short-term employment in cities, the proportion of workers in rural areas was not declining anywhere near as fast. The share of the rural population to total population had fallen much more slowly, from 74% in the 1991 Census to 69% in the 2011 Census. Even as pressure developed on agriculture, there were limited opportunities for workers to move out of this sector.

The extremists among the prophets of liberalisation saw this growing crisis as nothing that the market could not solve. The three farm Acts that are now in dispute were the instruments that were to open up agriculture to the market. The Essential Commodities Act was amended to limit the scope for the government to intervene to reduce stocks when prices increased, only allowing for such interventions when there was a very substantial increase in price. The amendment also ensured that those who packaged a food product could stock virtually as much as they liked. A second legislative step removed the existing support system for the Agricultural Produce Market Committees in the state. And the third Act set out the nature of the agreement between the farmer and the trader. These free market reforms were to provide the farmer access to higher prices by tapping national and international markets.

If economists have tried to sell the farmers the dream of higher prices, the farmers have been, understandably, more concerned with the risks of a crash in prices. The entry of large players with deep pockets could first starve the APMC trading yards of stocks, and when the APMC yards did not survive the farmers would have no option but to sell to the large private traders. The strategy followed by larger telecom players could just as easily by used to first demolish the effectiveness of APMCs and then take over the market.

Farmers also knew from experience that if the international market could offer higher prices in some years, there were also years of global surplus when prices would crash. Without APMCs to buy their product in those years, the farmers could be left with large unsold stocks that would bankrupt them. Even if they managed to sell their produce, it would be at prices that would meet only a minuscule portion of their costs. The larger farmers may be able to bear this loss, for a few years, but the smaller ones would not. If they were forced to repay what they borrowed to cultivate a crop which failed, they could even be pushed to sell their land.

The farm bills are clear that the agreements with farmers cannot include clauses that would alienate the farmers from their land. But BJP states like Karnataka have simultaneously altered their land reform laws to make it easier for non-agriculturists to buy agricultural land.

Farmers’ distrust of the strategy underlying the three legal initiatives has been strengthened by the specifics in the Acts. While setting out stock market reforms, the government had provided for detailed regulatory mechanisms which were used to keep errant traders in line. In the case of the farm laws there is no mention of any regulatory bodies. The farmers are merely expected to take their case to the local sub-divisional magistrate (SDM). No one can really fault them for believing that if farmers have a dispute with a major industrial house, the SDM has much more to gain by standing by the corporate house rather than the farmer. Illiterate small farmers who cannot read what is written in their agreements would be particularly vulnerable. If they choose not to enter into such agreements, and the APMCs are no longer available, they would have nowhere to go.

The main thrust of the resistance to the farm laws may come from farmers in Punjab, Haryana and western Uttar Pradesh. These were the farmers who benefitted from the Green Revolution, and have the most to lose if the APMCs collapse. They also have the economic and cultural resources to resist the Central government. Their resistance may or may not succeed, but they have provided what is, arguably, the most consistent understanding of the risks of liberalisation.