Is It Too Late to Save Kashmir's Purple Fields?

Erratic weather patterns coupled with traditional farming practices have thrown the Valley's saffron industry into a crisis, and an over seven-year-old government mission aimed at reviving it is far from complete. 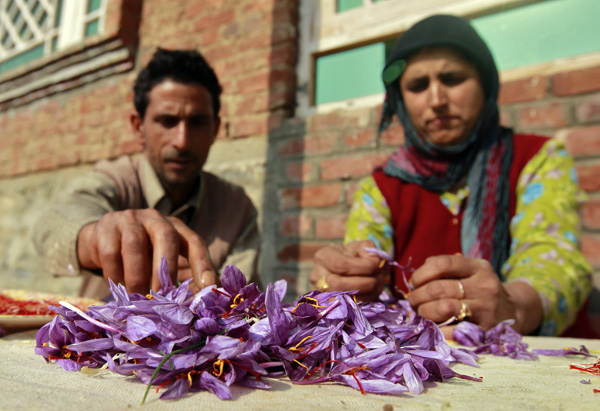 A Kashmiri family separates and collects stigmas from saffron flowers at their home in Pampore. Credit: Reuters

Srinagar: A fourth-generation saffron cultivator from Pampore town in Jammu and Kashmir, Riyaz Masoodi has been a witness to the highs and lows of the world’s most expensive spice grown in the Valley. He vividly remembers the slump saffron industry faced in 2014 when Kashmir was hit by a devastating flood.

According to Masoodi, last season was the “worst ever” in his memory. The saffron crop is very sensitive to the vagaries of weather and a prolonged dry spell from July to October led to a massive crop failure.

“We suffered around 90% losses and couldn’t retrieve even labour costs,” a soft-spoken said. But he is not alone in his woes, other growers have similar tales to tell.

Kashmir has a monopoly over the lucrative crop, and it sustains over 16,000 families in 226 villages, making it one of the largest employers.

Known as the ‘king of spices,’ saffron is largely grown in karewas of Pampore and some in pockets of Budgam and Srinagar, and involves laborious harvesting methods. Each saffron flower yields three to four stigmas which are picked by hand by an army of volunteers and then dried to separate precious frail red saffron threads. For centuries, these prized red gold threads have been used  for cooking and religious purposes, and in pharmaceutical, therapeutic and dyeing industries.

But, since 2000, the erratic weather pattern has tanked its yield in the Valley. And an absence of dependable irrigation facility has only aggravated the scenario. “The losses were huge this season. The production fell to just three tonnes,” said Altaf Aijaz Andrabi, director of agriculture, Kashmir, blaming the dry spell for the damage.

Why is saffron vanishing?

Kashmir’s saffron fields remain dormant till October when the bulbs germinate, sprouting into green shoots. Two to three spells of rain during September and October are critical for flowering.

It was in 1996 that the land under saffron cultivation reached to a maximum 5,707 hectares, while total yield went up to 15.95 metric tonnes – the highest produce recorded, according to the state agriculture department data.

But five years later, in 2002, the yield fell to 0.30 tonnes, the lowest ever. The same year, land under cultivation shrunk to 2,710 hectares. Since then, average per hectare production has been hovering between 1.5 kilogram to two kilogram – it had touched four kilogram in 1997.

This disastrous decline in Kashmiri saffron – renowned for its aroma and quality worldwide – has been attributed to government apathy, farmers’ reluctance to shift to high-yielding plant varieties, poor and traditional farming practices, soil depletion, higher incidents of attacks by pests and diseases, unorganised marketing and pollution emanating from cement factories from nearby Khrew and Wuyuan villages.

But at the centre of the crisis, argues Abdul Majeed Wani, the president of the saffron growers association, has been the changes in precipitation since 2000. “Either we witness untimely and heavy rains, which end up damaging entire crop, or it doesn’t rain at all when needed most,” Wani said.

Data obtained from the weather department corroborate Wani’s concerns. Against a well-distributed rainfall of around 1,500 mm throughout the year till 2000, the Valley has now been receiving just 400-500 mm of rains.

Besides, the entire Pampore belt, as per the agriculture department, has witnessed an “unusual phenomenon” of receiving just a few inches of snowfall compared with the 2-3 feet snow in adjoining areas, resulting in less retention of moisture in the saffron fields. The department has blamed expansion of industry in the area for the change.

While demand for saffron has grown to around 40 tonnes in India, many farmers, dejected because of the low returns, have over the years become targets of land brokers even though there is a complete ban on sale of this prized land. A revenue official said that around 250 hectares of saffron land has been lost to urbanisation. “I am talking about Pampore only,” said the official.

Another grower, Mushtaq Ahmad Bhat, sold a portion of saffron land in 2015 to arrange money for his son to get a job. “This (selling of saffron land) was unthinkable some two decades ago. But it is no longer a dependable source of livelihood,” said Bhat. 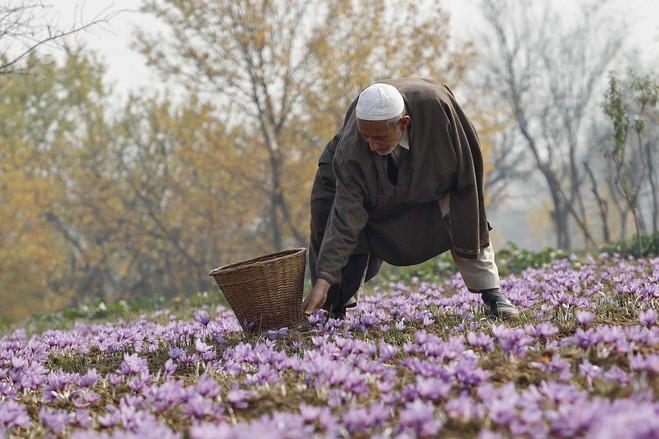 In 2010, Center approved Rs 371 crore for the National Saffron Mission aimed at revival and rejuvenation of saffron in the Valley. Credit: Reuters

Adding to the farmers’ worries, Kashmiri saffron also faces tough competition from varieties from Spain and Iran – the two other places where the crop is cultivated – apart from sale of fake saffron in the market.

But agriculture scientists like Firdous Ahmad Nehvi put part of the blame on the farmers. Against a recommended corm (bulb) planting cycle of five years for better yield, farmers follow a planting cycle of 15 years, according to a study at the Kashmir Agriculture University. The long planting cycle results in a fungal disease called corm rot, which causes a decline in production.

In 2010, the Centre approved Rs 371 crore for the National Saffron Mission aimed at revival and rejuvenation of saffron in the Valley. A few years later, the plan was increased to Rs 411 crore.

The focus of the programme was to address the lack of irrigation by installing 128 tubewells and 1,548 sprinklers in saffron fields. Besides, the farmers were to be given Rs 4.94 lakh financial support per hectare of land for rejuvenation of the crop.

A Rs 22-crore Saffron Park with a quality control lab and infrastructure for sorting, grading and packing of saffron for better marketing opportunities, seed nurseries, weather stations and 758 centres to supply organic manure at cheap rates were other components of the project.

Though the entire programme was to be completed in four years, in 2015, the J&K government got a two-year extension for implementing the prestigious programme.

Today, however, the mission is far from being completed. Andrabi said that 2,360 hectares of the total saffron land has been “rejuvenated” as per the requirement under the plan. “The rejuvenation and mechanisation phases are being accomplished,” he said.

But the government’s utter failure in taking the drip irrigation system to saffron fields has failed the entire programme. In the past seven years, just eight of the 3,797 water sprinklers have been completed. While the government claims it has dug 120 of the 128 bore wells, most are defunct and are yet to be connected to the farms. Many other components of the programme have met the same fate.

“Despite financial support and equipping farmers with improved technologies, there is lesser impact on the ground because the irrigation problem hasn’t been solved,” said a senior official at the agriculture department.

The government had outsourced setting up of a drip irrigation system to the mechanical engineering department. “We are suffering losses because of mechanical department’s failure to perform its duty,” said Andrabi.

During the ongoing budget session of the J&K assembly, the government for the first time admitted to “having not achieved desired results” under the mission.

“Indeed, despite enormous amounts of money spent (70% of the total Rs 411 crore) the sector saw one of its worse ever crop failures this year,” the state finance minister Haseeb Drabu told the House on January 11.

The minister then went on to ask the growers, much to the shock of many experts, to go back to traditional system of cultivation, putting the onus on the farming community to save saffron from getting extinct.

Back in his office in Lal Chowk, the summer capital of Srinagar, Masoodi remarked: “Had the Saffron Mission been rolled out efficiently, the entire picture would have changed in four years. Now that is a dream too distant.”

The statistics suggest the same. Under the mission, the target was to increase per hectare yield to six kilogram. This has instead fallen to less than two kilogram. This grim scenario has given rise to questions of whether Kashmir’s purple fields can be saved from turning barren. Many, including some officials from agriculture department The Wire spoke to, were not optimistic. “It may sound exaggerated but this is a race against time,” said one official.