Amid An Important Farmer Debate, Don't Forget the Woes of India's Landless Workers

While landless farm workers and landless peasants outnumber land-owning farmers, the former are almost entirely absent in the policy and policy-debates on farming. 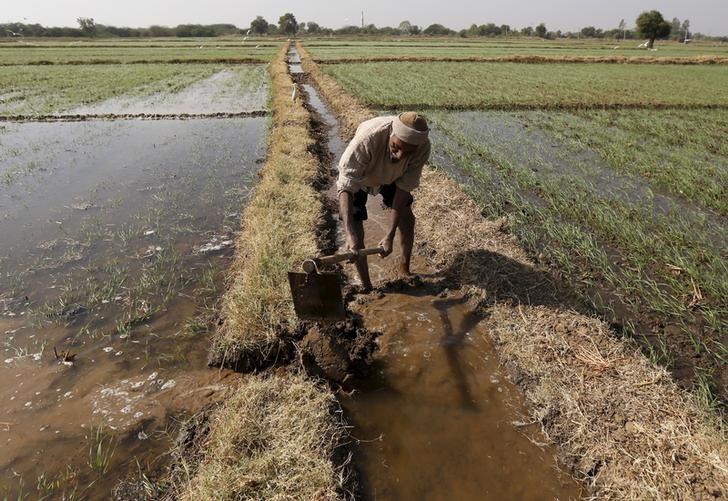 A farmer channels water to irrigate his wheat field on the outskirts of Ahmedabad, India, December 15, 2015. Photo: Reuters/Amit Dave

What is the most numerous segment of Indian society? Many people routinely believe that it is land-owning farmers. But no, the latest census data says that it is the rural landless who comprise the largest segment of our populace.

At present, the latest census data we have is for the year 2011. This says that a total of 263 million persons (26.3 crore) households are involved in farming activities. Out of this only 119 million persons are land-owning farmers while 144 million are landless workers and peasants. In other words, the number of landless farm workers and landless peasants is significantly higher than those of land-owning farmers. However the former are almost entirely absent in the policy and policy-debates on farming.

Further, the census data reveals that the increase of this largest segment of our population has been very rapid in recent times. In the previous census of 2001 only 107 million landless farm workers were counted, which means that within a decade their number increased by 37 million ( from 107 to 144 million) , a huge increase. Only a relatively small part of this could be due to family divisions and population increase. It is clear that a large number of small farmer (and to a lesser extent rural artisan) households moved towards landless farm worker status. This is a trend which is still continuing at a fast pace as small farmers and rural artisans face increasing livelihood problems.

At the same time, the increasing numbers who are getting counted as landless farm workers can hardly get enough employment in farm work in and around their own villages due to a number of factors. One factor is the decreased employment generation in farming due to the use of more machinery and weedicides etc. Secondly higher levels of alienation of landless Dalits from local elites also prevents them from seeking work in their own villages.

Hence those who get described frequently as landless farm workers are actually doing farm work in their own villages ( if and when available) but in addition, they also seek work in nearby mines, quarries, construction and industrial work, often leaving early in the morning and returning in night. Many others are perhaps trying to earn more income now from work as migrant labourers, working in distant farms, mines, brick-kilns and construction sites, leaving for long seasons of work and returning home for shorter periods.

Watch | ‘Farm Bills Are an Attempt to Wipe Out the Fortunes of Farmers’: P. Sainath

In the absence of any caring response from most governments, they have evolved their own coping mechanisms in recent decades, but all this got disrupted in the time of COVID-19.

As the number of rural landless have increased at a fast pace, the only significant national-level response during the last two decades has come in the form of MGNREGA (Mahatma Gandhi National Rural Employment Guarantee Act). While the UPA government deserves all credit for enacting this legislation and giving it an important place, the actual allocations made for the scheme were not adequate.

Once the NDA took over, initially the scheme was criticised at the highest level in the government. However, soon better sense prevailed and the scheme was retained while at the same time denying it adequate budget. The budget was increased to some significant extent only under the COVID-19 special package, but by then the need of returning workers for livelihood support had increased so much that even this increase proved very inadequate in checking growing rural distress, particularly among the landless.

The guarantee component was weakened at the last stages of passing the law. The guarantee exists in the provision that if the government cannot provide employment as per procedures stated in the legislation, it will give compensatory payment to those who demanded employment. This was diluted by adding that this is subject to government finances permitting this. Hence the legal aspect of the guarantee got weakened. This has in practice led to a situation in which this compensatory payment is not made in over 95% of the cases where it needs to be made.

While the scheme has been monitored more in terms of budget allocations and expenditures as seen in official records, its actual corruption-ridden implementation has further limited benefits to the poorest landless to such an extent that many of them have lost faith in this. At the same time where this has been implemented well, this has given a lot of real hope. So the scheme should stay and there should be a widespread campaign for strengthening and expanding this scheme, not just in terms of what gets shown on computer screens of officials, or on the smartphones of smart bureaucrats, but in terms of the ground reality.

However, it is clear that this scheme by itself cannot provide an adequate and reliable base for the livelihoods of growing numbers of highly vulnerable rural landless households. So for this, two additional measures are needed.

The first measure is based on the concept of a minimum land holding for all rural households. This may be only a small holding but if supported by water and moisture conservation/minor irrigation and cultivated intensive in least-cost ways using agro-ecology approach, this can provide a reliable base of food security, good health and firm bonds with the village.

Now it is often stated that land is just now available for distribution among the poor, but we also see that huge land is always available for corporates and the entire government machinery helps in facilitating this. Again a lot of village land is also passing into the hands of urban rich people and moneylenders. It seems that in the present balance of power in India rural land is available for all except those who need this the most and deserve this the most (rural landless workers)!

The excuse of non-availability is given only when it is a question of finding land for the landless. So this excuse should not be accepted, the bluff should be called and the country should move in the direction of providing some land for the landless and a minimum land holding for all rural households.

When I visited a village in Vidarbha some time back, I was immediately surrounded by land-selling middlemen who were full of offers for selling land in many parts of the village. Potential buyers were visiting from urban areas so regularly that I was also mistaken to be a potential buyer of land.

I subsequently learnt from my inquiries in the village that many impoverished and indebted peasants were forced to sell their land and very rich persons including politician in nearby areas were the main buyers.

So small farmers have to be strengthened to check land-alienation. Lowest cost, agro-ecology approach will help in this. The government should extend a strong helping hand to boost water conservation and minor irrigation in a big way while also supporting agro-ecology in other important ways. The government should procure this healthy food produced by agro-ecology by providing a very fair and encouraging price to hard-working farmers. Their already accumulated debts can also be phased out with government help.

This two-sided approach of helping the rural landless workers to become small farmers while also helping small farmers to avoid land alienation will help greatly to reduce rural poverty and resolve the farming crisis of India.