Fearing that their land will be taken away by the government, over 5,000 farmers from Bhavnagar have sought permission for mass euthanasia along with their families. 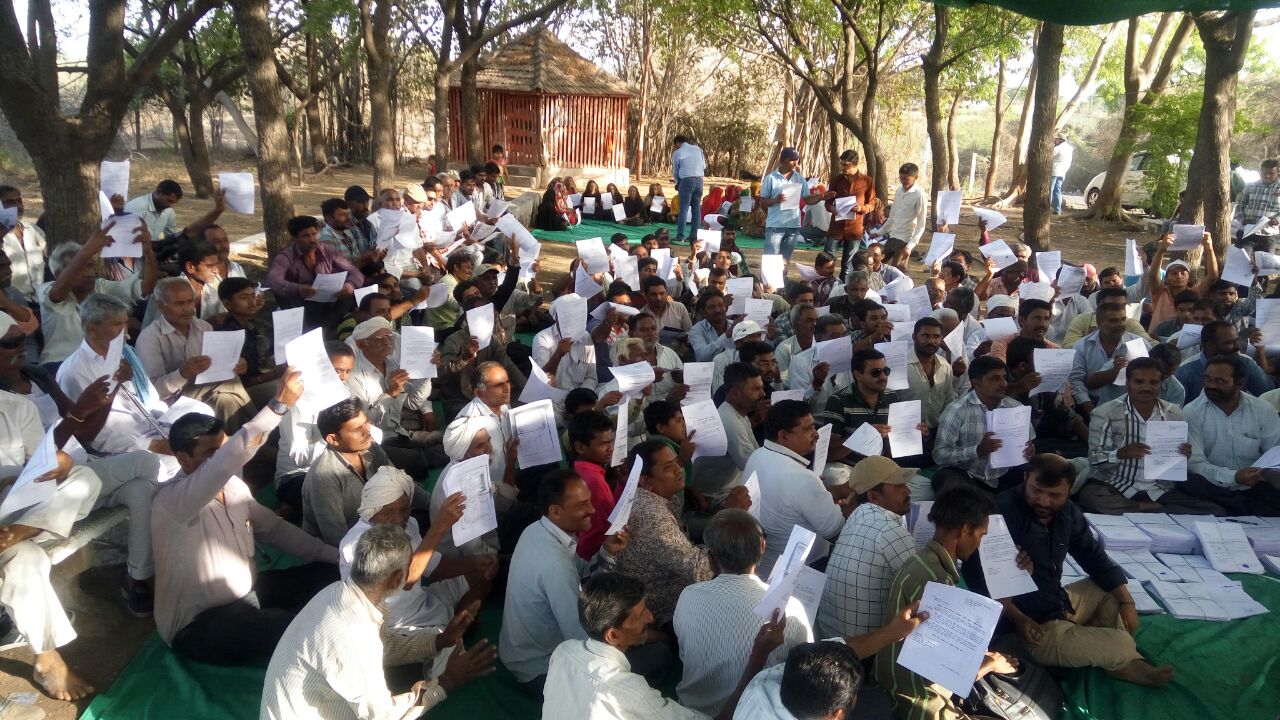 The Bhavnagar police has declared a state of emergency in the 12 villages opposing GPCL’s land acquisition. Credit: Special Arrangement

Bhavnagar (Gujarat): On April 1, about 100 heavily armed police personnel marched into a nondescript village, Badi in Ghogha taluka of Gujarat’s Bhavnagar district, and fired tear gas shells and lathi-charged locals, injuring about ten persons, including women, and detained more than 50. All of this was to disperse about 11,000 farmers who were sitting in protest to try and keep their land, which is to be taken over by the Gujarat Thermal Power Corporation (GPCL).

For the past four months, Badi and its neighbouring 11 villages, where villagers depend largely on farming for their livelihood, have turned into something of a conflict zone. Since February this year, police have been camping in agricultural fields in these villages. To add to that, from April 1 this year, the Bhavnagar police has declared a state of emergency in the 12 villages opposing GPCL’s land acquisition, banning the assembly of four or more people at one place.

Fearing that their land will be taken away from them, 5,229 farmers from the 12 villages have sought permission for mass euthanasia along with their families. “We have decided to travel to Gandhinagar and then to Delhi with our plea. However, we have not decided on the dates yet,” said Pravinsinh Gohil of Khadsaliya village.

Krupa, an 18-year-old woman from Malekvadar village who travels 25 km daily to Bhavnagar town for college, said, “Ever since we have been protesting against GPCL, our lives have been turned upside down. Villagers who never had to deal with the police all their lives are now living with hundreds of police personnel. Women and children have also joined the protest, because if they take away our land we have no source of livelihood.”

“On April 1, male police hit women who were protesting. I was hit on the head and had to get five stitches. I could not sit for one paper of the semester examinations. It still hurts,” adds Krupa. 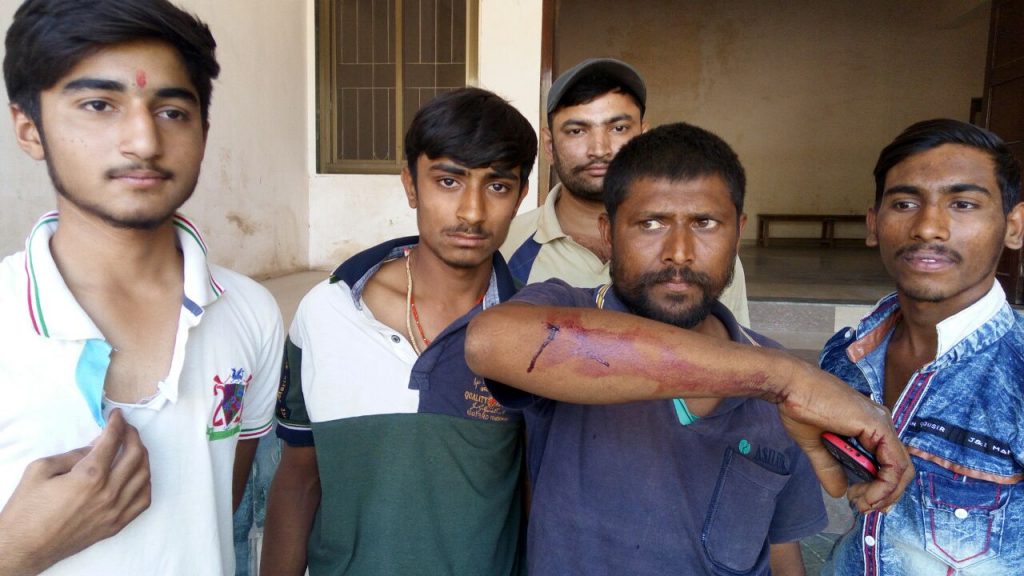 Some injured villagers from Badi village after the police lathicharge on April 1. Credit: Special Arrangement

A total of 3,377 acres from the 12 villages of Ghogha taluka, Bhavnagar, including farm land, grazing land and wasteland, were acquired by the Gujarat government in 1993-94. The land was acquired to establish a thermal power plant, construct a colony, have an area for ash dumping and mine the area for lignite.

In 1997, the state government had taken consent from the villagers. However, no attempt was made to take physical possession of the land until December last year.

Harshad Patel, the district collector of Bhavnagar, has been away on training, The Wire was informed by his office. In his absence, M.A. Gandhi, commissioner of Bhavnagar Corporation, said, “I shall revert.” However, he couldn’t be reached for specific comments on the matter.

“Apart from Bhavnagar, farmers are also protesting in Anand, Nadiad, Navsari and Bharuch. The issue of land grab for aggressive industrialisation isn’t confined to the 12 villages of Bhavnagar. Land has been taken for expansion of National Highway 8 between Mumbai and Ahmedabad, for pipeline laying by Reliance and ONGC, for the bullet train and by GPCL. There has to be a limit to land acquisition,” said Anand Yagnik, an advocate who has fighting land acquisition cases, including on behalf of the Bhavnagar farmers.

In October 2016, a group of over 50 farmers from Surat had fought and lost a case against Reliance, which had acquired land to transport gas from the Krishna Godavari basin to Gujarat, after the Supreme Court dismissed the farmers’ plea for higher compensation.

However, unabated land acquisition has been ongoing in Gujarat. In 2016, the Ministry of Road Transport and Highways had initiated acquiring 111 hectares in Maharashtra and Gujarat for the Ahmedabad-Vadodara- Mumbai expressway and a 380-km highway amid protests by farmers.

Then, in 2017, the Union cabinet approved a proposal to transfer 4.64 hectares belonging to the Indian Institute of Soil and Water Conservation Research Centre in Anand district to the National Highways Authorities of India for extension and six-laning of the Ahmedabad-Vadodara Highway. 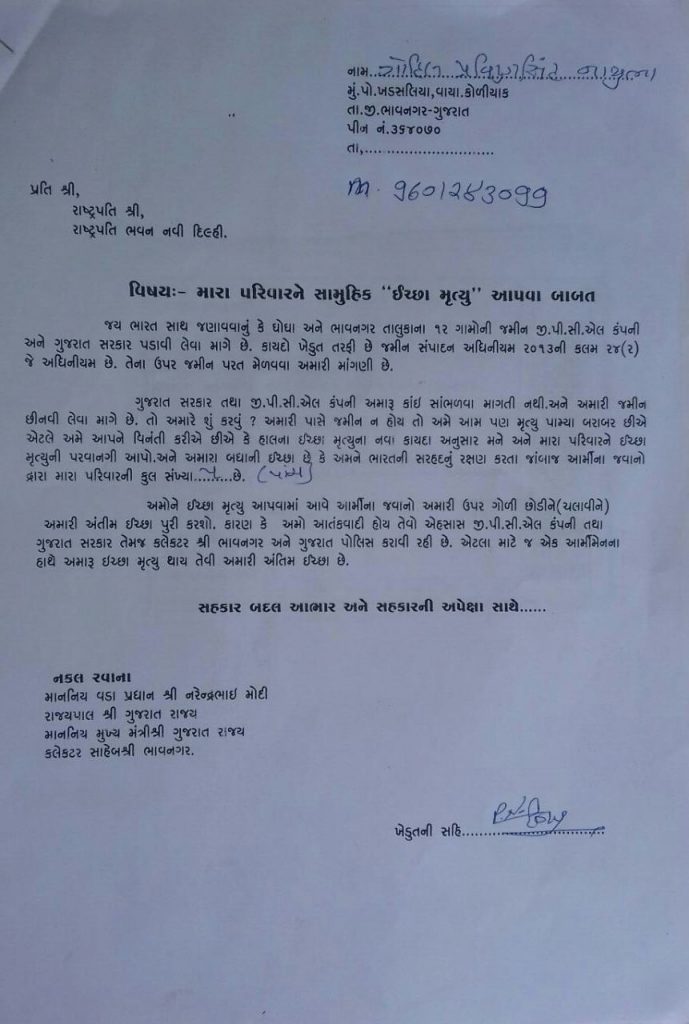 “Not a single district has been spared between Mumbai and Ahmedabad where the government has either decided to acquire land or has already acquired for some project or the other,” says Yagnik.

In a report tabled in the Gujarat assembly in May this year, the comptroller and auditor general said the state government had not revised its annual statement of rates or jantri rates since 2012, as a result of which it may have lost the opportunity to generate more revenue.

“The rate of our land is way higher than what the government will offer if they go by the jantri rate. This is one of our prime concerns. For instance, if they take land in Olpad, Surat, the jantri rate is Rs 100-200 per square metre. At that rate, the farmers will get Rs 2.5 lakh per bigha, whereas the market rate of land in the area is Rs 50-70 lakh per bigha,” Ramesh Patel, a farmer who heads the Olpad taluka, Surat unit of Khedut Samaj, told The Wire.

That the farmers have been not been paid the true cost of their land is clear from another instance, in a village in Bharuch district in South Gujarat, where the government had acquired land for expansion of National Highway 8 at Rs 24 per square metre. However, an RTI revealed that the government land was sold at an exorbitant rate in the same village.

“In a Bharuch village, the Gujarat government paid compensation at the rate of Rs 24 per square metre while acquiring land for expansion of National Highway 8. In a response to an RTI filed by us, it was revealed that government wasteland and gauchar (pasture) land was sold by the state in the same village at Rs 2,000 per square metre. This transaction happened just a year before land was acquired by paying a meagre compensation to the farmers of that village,” said Yagnik.