Over 70,000 farmers led by the Bhartiya Kisan Union are marching to Delhi to protest against the ‘anti-farmer’ policies of the government.

New Delhi: Over 70,000 farmers from Uttar Pradesh, Uttarakhand, Haryana, Punjab and other parts of North India with a large convoy of tractors and trolleys are marching to Delhi and are scheduled to reach the Kisan ghat in the capital on October 2.

Farmers affiliated to the Bhartiya Kisan Union (BKU) flagged off the ‘Kisan Kranti Yatra’ on September 23 from Haridwar’s Baba Tikait Ghat, named after the legendary leader Mahendra Singh Tikait, who established the BKU in western UP. The march comes 30 years after farmers led by Tikait famously brought Delhi to a standstill for a week, forcing the Rajiv Gandhi government to accept all their demands. It is now led by Naresh Tikait, president of the BKU, and Rakesh Tikait, who is the national spokesperson. The march is BKU’s first major national-level protest since Mahendra Tikait died in 2011.

The march, which is currently on their way to Ghaziabad from Modinagar, is making an attempt to underscore the issues faced by farmers – low minimum support prices (MSP), hike in diesel and electricity prices and pending sugarcane dues of farmers.

The past few months have seen frequent farmer protests across the country, highlighting strong undercurrents of widespread agrarian distress. Earlier this year, the All India Kisan Sabha (AIKS) organised the Kisan Long March, where approximately 35,000 farmers marched from Nasik to Mumbai to gherao the Maharashtra Vidhan Sabha and demanded the implementation of the Swaminathan Commission’s recommendations, higher MSPs and a blanket loan waiver among other things.

In June, the Rashtriya Kisan Mahasangh organised a ten-day strike and the All India Kisan Sangharsh Coordination Committee (AIKSCC) led a farmers march in New Delhi in July, protesting against the BJP-led Centre’s backtracking on election promises such as hiking the MSP. In September, over one lakh farmers from 23 states marched from the Ramlila Maidan to Parliament Street in New Delhi, demanding remunerative prices for their produce.

The Kisan Kranti yatra started off on September 23 from Haridwar and proceeded to Patanjali Yogpeeth, where the march was delayed for two days due to incessant rains. The farmers then spent a day at a government college in Muzaffarnagar and reached Meerut on September 28. The farmers are scheduled to camp in Ghaziabad on October 1 and proceed to Delhi on the morning of October 2.

The BKU has submitted a comprehensive list of demands to the Centre for immediate implementation.

Pending sugarcane dues, which remain at Rs 10,000 crore in UP even three months after the season ended, has been a cause of severe distress to farmers. As the Indian Express reported, increasing cane yields and increased sowing has led to a surplus sugar production. In the 2017-18 agricultural year, India produced 32 million tonnes of sugar, while the demand was only 25 million tonnes, leading to a crash in prices of sugar. This, sugar mills argue, has hamstrung their ability to clear pending dues.

Before the 2017 UP elections, Prime Minister Narendra Modi had acknowledged the issue of delayed payments to sugarcane cultivators, promising that if the BJP is elected, they would be cleared within 14 days. As previously reported by The Wire, despite the BJP forming the UP government, pending sugarcane dues in the state mounted to 37% of the value of the total sugarcane purchased by mills. Pending dues in the country mounted to Rs 22,000 crore, the highest ever.

Kuldeep Panwar, a member of the Uttar Pradesh Kisan Sanghathan, questioned why the government is importing sugar from Pakistan when there is excess domestic production. “The government should ensure that farmers get decent rates for their sugarcane harvest without any delay.” 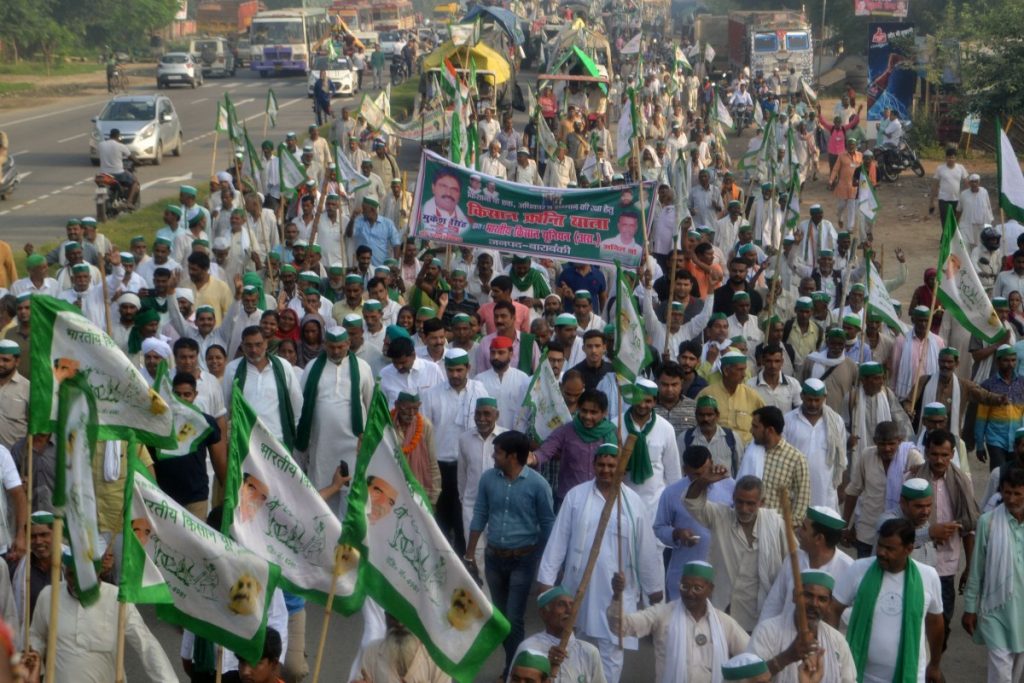 Thousands of farmers march to Delhi with a list of their demands. Credit: Munish Kumar

The government’s flagship crop insurance scheme, the Pradhan Mantri Fasal Bima Yojana (PMFBY) was launched on January 13, 2016, replacing two existing schemes. It was said to have incorporated the best features of the previous schemes while eliminating their shortcomings.

The crop insurance scheme is meant to addresses the risks that may arise due to variability in crop yield or crop damage, in which case the farmer is to be paid the difference between the average yield’s worth and the actual yield with the degree of risk of damage determining the rate of compensation.

Most farmers claim that the crop insurance scheme has largely benefitted the insurance companies at the cost of cultivators. According to an analysis carried in the State of India’s Environment 2017: In Figures, insurance companies under PMFBY and Restructured Weather-based Crop Insurance Scheme (RWBCIS) have so far honoured just 17% of the total claims raised during the 2016 Kharif season. According to the Ministry of Agriculture and Farmers Welfare, there were insurance claims of Rs 4,270.55 crore under the two schemes, out of which, only Rs 714.14 crore was paid to farmers by March 2017.

“The implementation at the grassroots level matters. The government needs to ensure that farmers are able to reap the benefits of the scheme,” said Rakesh Tikait, national spokesperson for the BKU.

Several farmers have embarked on the yatra with their tractors protesting the National Green Tribunal’s (NGT) order to ban private and commercial diesel vehicles older than ten years, which has hit farmers’ interests hard. The ban on agricultural machines and vehicles that consume diesel effectively means that the majority of the burden will be borne by the farming community. The BKU has also called on the government to either set up a flagship fund to provide the farmers with monetary compensation to buy new tractors or scrap the NGT order.

For most farmers, the massive increase in petroleum and diesel prices over the past few months have eliminated any gains made by the MSP established by the government on crops. Diesel, which is used as fuel in a variety of farm equipment such as tractors, combine harvesters and irrigation pumps, has increased the cost of production for most crops. In addition, global prices of vital fertilisers like ammonia produced from natural gas and sulphur, a by-product of refineries, have also naturally risen with the increase in fuel prices. The fuel price hike has thus significantly reduced the margins of farmers. 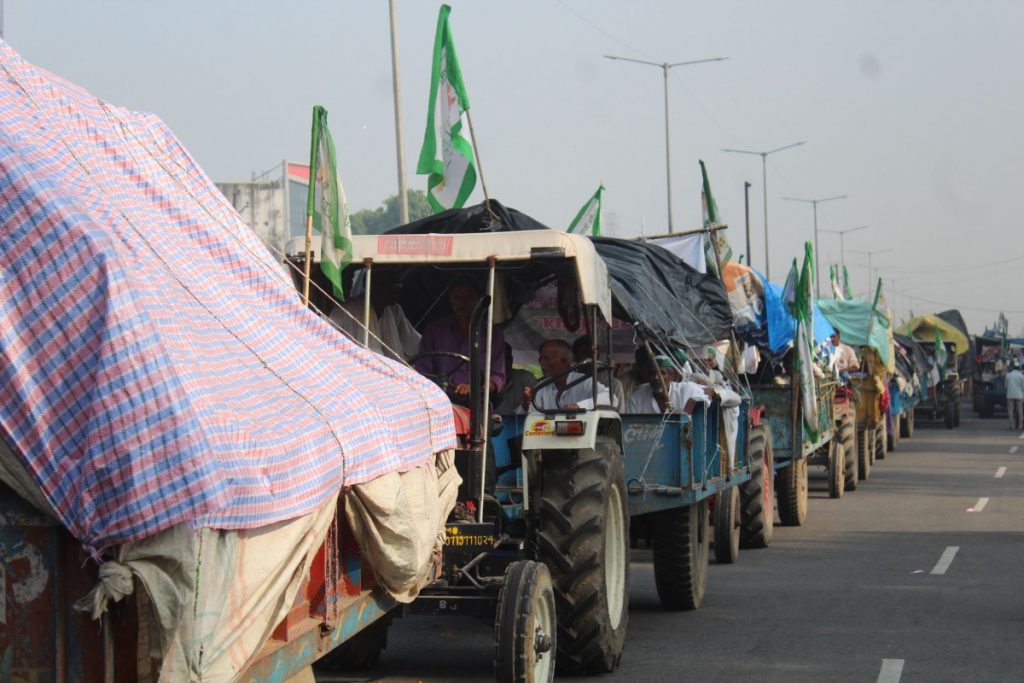 Scrapping the hike in electricity costs

The decision of the Adityanath government to hike electricity tariffs for rural consumers and unmetered tubewells after the culmination of civic body polls in the state has increased the monetary burden on farmers while the quality of rural power supply hasn’t improved.

“Our villages get electricity for only about four-five hours, while electricity bill prices have risen from about Rs 250 to almost Rs 1000. The government must either lower the bill or give us electricity for at least 14 hours,” Panwar said.

Implementation of the Swaminathan Commission’s recommendations

As Harish Damodaran of the Indian Express has reported, there is a wide gap between the MSPs for various crops in the 2016-17 kharif season and their estimated production costs. Additionally, as reported by The Wire, low penetration effectively means that only about 6% of farmers are actually able to sell their produce at the stipulated MSP.

Another prominent demand of the BKU is that the farmers must be consulted in any decision of the Centre to link agricultural labour to MGNREGA. The Centre mulled over a proposal to link the scheme with agriculture in an attempt to increase farmers’ incomes. The government had constituted a committee consisting of chief ministers of seven states to examine the proposal and its prospect of increasing job opportunities in the rural sector.

Pension for farmers over the age of 60

The BKU has demanded the implementation of a comprehensive old age pension scheme for farmers over the age of sixty.

“Once a farmer grows old and is unable to work and left to fend for himself in the village, he needs a steady source of income. There should be a pension scheme for such farmers,” Panwar said

A demand often repeated at every farmers’ agitation is that of a one-time complete loan waiver. 82% of all indebted agricultural households are those which possess less than two hectares of land. Swaminathan has himself opined that loan waivers for farmers are a temporary solution to offset rural agrarian distress.

The Uttar Pradesh state government’s much-hyped waiver promised to waive crop loans up to Rs 1 lakh for small and marginal farmers. However, beneficiaries of the scheme soon discovered that many of them had received waivers for a paltry sum of Rs 1 or Rs 1.50.

“Upon reaching Kisan Ghat on October 2, the leadership of the BKU will decide the future course of action for the farmers to get the central government to implement our demands and address the grievances of the farmers,” Panwar said.

Raghavi Sharma is an intern with The Wire.