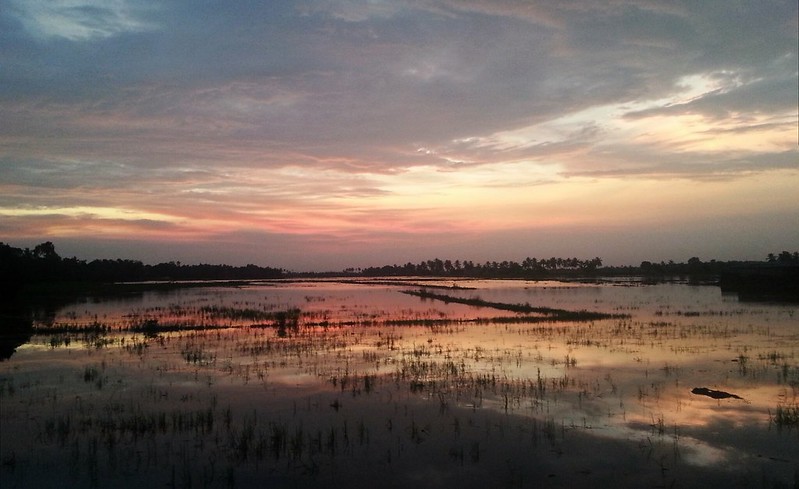 The incessant summer rains left Kuttanad’s paddy farmers beleaguered as their matured crops lay submerged in the fields just before the scheduled harvest. Kuttanad, in Kerala, lies two to three feet below sea level, which means water that accumulates here is hard to drain naturally. The region is nonetheless famous for sub-sea level farming, and accounts for more than half of the paddy cultivated in the state.

The region spans three districts in Kerala: Alappuzha, Kottayam and Pathanamthitta. The paddy farmers of Kuttanad have suffered losses due to untimely rainfall and floods. For example, farmers of the 62-acre Niranam padasekhram (paddy polder) in Pathanamthitta district were set to harvest their crops in the second week of April. Unfortunately, unseasonal rainfall left the paddy fields water-logged and farmers were unable to reap the harvest. Now, they have the laborious challenge to deploy harvesting machines in the submerged field. The dewatering process is particularly tedious and risks destroying the crops as well.

The estimated loss of farmers from Kuttanad stands at Rs 9,608 crore, encompassing crops over 6,582 ha, according to rough estimates prepared by the state’s department of agriculture during the puncha (first crop) season this year. With changing rainfall patterns, farmers can no longer find reliable guidance in the usual farming calendar. The sowing for the first crop season usually ends by November, but due to rains in October 2021, the process got distended and in turn affected the harvest.

On average, a farmer needs to get a yield of about 20 quintals for paddy cultivation to be profitable. Due to unpredictable rain, however, farmers may not even get a fourth of this. Kuttanad is considered the ‘rice bowl’ of Kerala and is home to around two lakh farmers. As they continue to suffer severe losses from paddy cultivation, issues like farmers’ suicide thus take centre-stage here.

Other major economic activities in the region include backwater tourism, fishing and livestock management. But they also took a beating on the back of recurrent floods.

Changes in rainfall and consequent flooding in Kuttanad are the result of shifting geo-climatic conditions over the Arabian Sea and the Bay of Bengal, and delayed or few adaptation strategies. Warmer seas and air have led to the creation of stronger and/or more frequent storms. According to a recent report of the UN Intergovernmental Panel on Climate Change (IPCC), surface temperatures have risen by about a degree relative to the historical average. This has encouraged the formation of tropical storms with greater frequency over the Arabian sea, followed by more and/or untimely rains over Kuttanad.

Indeed, Kuttanad’s average rainfall amount reportedly increased by 166 mm from 2014 to 2019. The geographical peculiarities of Kuttanad meant the region was already more vulnerable to seasonal floods in the southwest monsoon season and. But with irregular rainfall, the local population is under the threat of constant flooding.

This year, the higher water level in the region prompted the authorities to open the shutters of the Thottappally spillway to drain water faster into the Arabian sea. However, this opening allowed salt water to intrude into paddy fields, affecting crop quality.

After the start of the COVID-19 pandemic, many NRIs returned to India and to agriculture. About a fourth of families in the upper Kuttanad region are categorised as ‘NRI households’, meaning at least one member works abroad (typically in the Gulf region). These members either cultivated their own land or leased land, for paddy crops.

But the waterlogging problem dashed the hopes of such farmers, some of whom had invested as much as Rs 80 lakh to convert wetlands into paddy fields.

The recent IPCC report reiterated that a rise in temperature increases the probability of climatic hazards and said that their consequences may be irreversible. India is among the world’s nations considered to be most vulnerable to a rising sea level, especially because of the country’s population density. This deepens the country’s need for stronger adaptation strategies.

Kuttanad in particular needs to adopt intrinsically climate-resilient farming to lower the risk of crop loss. Awareness of ‘climate smart’ agricultural practices, related investments and its effective implementation are the needs of the hour. (According to the World Bank, ‘climate smart’ means agricultural productivity responds in an agile fashion to adaptation and mitigation strategies.)

Fourth, the crops need to be separated from the water.

a) The state needs to desilt canals to ensure water drains from fields without leading to waterlogging.

b) The farmers of Kuttanad have pointed to a shortage of harvesting machines as the reason for the delayed harvest and consequent crop loss. So enough of these machines should be available so farmers can harvest their crops at the scheduled time.

c) Farmers should have access to good storage facilities, to protect the crops that have been harvested on time.

These changes are urgently needed if we intend to ameliorate climate-induced distress in the rice bowl of Kerala.

Aswathy Rachel Varughese is a research scholar at the Centre for Human Resource Development, Institute for Social and Economic Change, Bengaluru.