Kashmir's Fruit Orchards Have Been Ravaged by Unseasonal Autumn Snowfall

While losses are likely to touch Rs 1,000 crore, the impact this large-scale devastation will have on Kashmir's horticulture sector, considered to be the backbone of J&K's economy, remains to be seen. 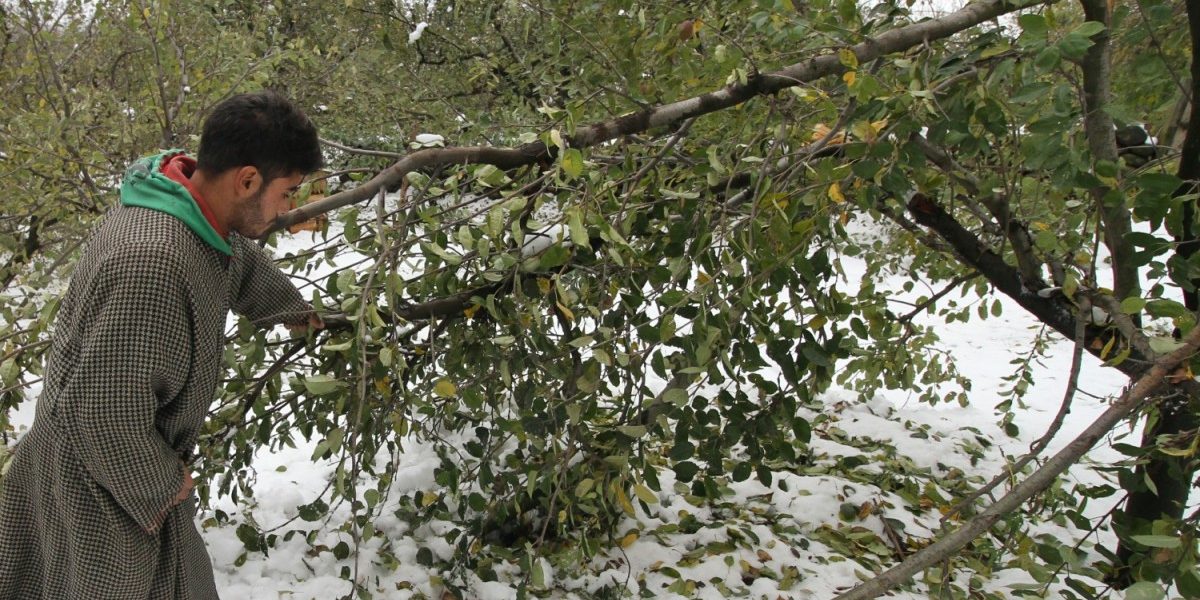 A youth attempting to repair branches of fruit-bearing trees damaged by untimely snowfall in Kashmir.

Kulgam/Shopian (J&K): A bumper crop was reason to rejoice for Showkat Ahmad Dar, an apple grower in south Kashmir’s Yaripor village. He was expecting “hefty returns” after his year-long investment in the family’s apple orchard. A father of three children, Dar’s dream of constructing the second-storey of his house was finally unfolding in front of his eyes.

Spread across a little over one hectare of land, Dar’s fully-grown orchard was his only source of income. “My years of tireless work [had been] bearing fruit for [the] past couple of seasons,” 47-year-old Dar told The Wire at his modest house. Today, however, his orchard is a horrifying scene of large-scale destruction. There are damaged and uprooted fruit-bearing trees, some of them still laden with apples, strewn across it – similar to other farmers’ orchards in the Valley. 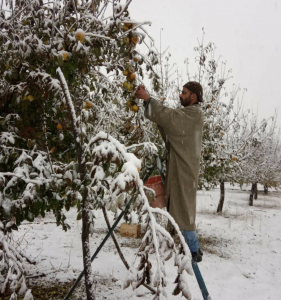 A farmer plucking fruit from his orchard after an unseasonal snowfall struck the Valley’s orchards.

A rare autumn snowfall this year has spelt doom for Kashmir’s horticulture industry. The growers, who had invested 10 to 15 years in nourishing their orchards, saw nature’s fury wiping out their investment in a matter of a few hours. In most districts of the Valley, in village after village, the farming community is in shock.

The unexpected snowfall, which even the meteorological department failed to forecast, blanketed the entire Valley by the time people awoke from their sleep on the morning of Saturday, November 3. The last time the region received snowfall so early was in November 2008.

Dar was still in bed when cries coming from his neighbourhood broke his sleep. Realising what had befallen him, he rushed to his orchard on foot – about nine km away from his home.

“Everything had finished. The trees had broken into two halves, vertically, right from the trunk upwards. The fully grown branches were hanging by their skin. I counted 37 such trees, after which I couldn’t tolerate the horror and cried aloud,” said Dar. 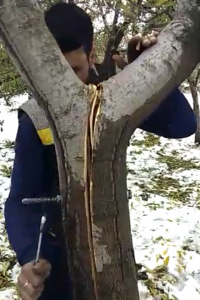 A youth attempting to re-fix the broken trunk of a fruit-bearing tree with nuts and bolts after massive snowfall led to large scale destruction to orchards.

Chief horticulture officer (CHO) Kulgam Roshan Din corroborated farmers’ stories. “The snowfall has damaged around 55% [of the] orchards. It is a preliminary assessment as we are yet to visit areas still cut off. The losses may go up,” Din agreed.

In the interiors of Kulgam, some of worst affected areas under fruit cultivation apart from Yaripor include DK Marg, Baripora, Manzgam, Kader, Kund and DH Pora. The pattern of damage at most of these places is similar. Of the total 21,000 hectares of orchard land in Kulgam, more than 13,000 hectares suffered partial to heavy damage, said Din.

The brunt these orchards – the only source of income for countless families like Dar’s – have borne repeats itself in adjoining Shopian. The district is known as the fruit bowl of Kashmir and is renowned for producing the best varieties of apple.

An official communication from the district CHO to the government has pegged the “tentative” damage at 35%. Of the 23,640 hectares of orchard land, at least 9,200 hectares has been hit badly. “In my jurisdiction the losses are above 40%,” said horticulture officer Fayaz Ahmad, adding that the entire belt along Mughal road received heavy snowfall, which may have wreaked havoc in that area too.

A video of a grower frantically removing snow with his bare hands from harvested crops yet to be packaged in his orchard, amid loud cries, sums up the plight of the farmers. 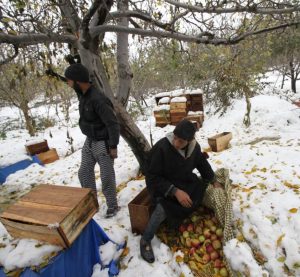 Members of a family trying to salvage whatever was left of their harvested crop which was dumped in the orchard after a rare autumn snowfall.

“See this,” the grower cries as he digs out his crop from under snow, moving desperately from one spot to another to find dumped apples. “What shall we do now? Everything is gone; these losses are huge. Even trees have broken apart. Oh Allah. Do justice with us, have your mercy upon us”.

This video, probably captured in Shopian, has been shared widely by people on social media. “This man’s spirits are completely crushed. His apple crop awaiting packing is buried under the snow and all his effort over the summer, his investment in tree oil and other treatments, has been for nothing,” tweeted former chief minister Omar Abdullah.

According to the president of the fruit growers association, Shopian, Muhammad Ashraf Wani, the annual turnover from the horticulture sector was expected to be around Rs 2,000 crore from the district alone.

But, he said, the snowfall has caused heavy destruction, adding that at least 25% of the crop was yet to be harvested or had been dumped in orchards for packaging. “The losses are huge not only for Shopian but [the] entire Valley,” he rued.

For young grower Gulzar Ahmad, the damage was unprecedented. “I have never seen such large-scale devastation in my life. Every single tree in my orchard stands damaged,” said Ahmad, who owns five kanals of apple orchard.

In the remaining two districts of south Kashmir – Anantnag and Pulwama – along with central Kashmir’s Budgam, the initial damage has been estimated at around 25% to 30%. In the northern districts of Kashmir losses reported are around 15% to 20%.

At many places in south Kashmir, people were salvaging whatever was left behind by nature’s fury. “It has broken our back, but you can’t fight nature,” said a visibly shaken Ghulam Mohideen who visited his orchard in Keller to assess the damage. 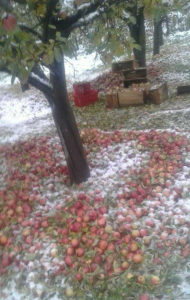 The scene of destruction that orchards bore across the valley.

An orchardist and head of a fruit growers association in Budgam, Bashir Ahmad Baba, described the situation as “catastrophic”. He said the newly grown orchards with high-density varieties of fruit trees have been “totally wiped out”.

Kashmir’s horticulture is a Rs 7,000 crore industry and is considered to be the backbone of Jammu and Kashmir’s economy. As per the state’s latest economic survey report, more than 7 lakh families – comprising of 33 lakh people – are directly or indirectly associated with the sector.

In the conflict ridden Valley, where other sectors have been running in losses owing to decades old strife, horticulture has kept life going in a region of trying circumstances. Most of the families have some sort of land holdings developed into orchards, particularly in rural Kashmir.

At least 70% of India’s total horticultural produce comes from Kashmir, according to state government data.  The Valley offers good conditions for the cultivation of crops like varieties of apple and pear, peach, plum, apricot, almond, cherry, besides medicinal and aromatic plants. 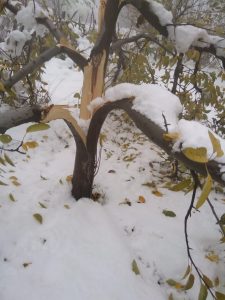 A tree broken straight down the middle due to the weight of the snow accumulated on its branches.

The horticulture department was expecting that the annual turnover in the Valley will exceed Rs 9,000 crore this year. But the recent devastation caused by the snowfall will have both short and long term impacts on the sector as well as the overall economy.

It is not only the loss of crops that is worrying, the damage to fruit-bearing trees will have an even greater bearing on the economy. These losses will be recurring for years to come. “It takes at least 10 to 15 years to have a fully grown orchard. In most cases, growers will have to start from [the] beginning now as, except for tree trunks, there is nothing left,” said Baba of Charar-i-Sharief, the area known for growing varieties of pear and apple.

Many farmers would also take annual loans from banks and fruit traders to meet their day-to-day requirements at home and would repay borrowings with earnings from their orchards. That option is also gone now.

Why is the government the target of farmers’ anger?

November is the end of autumn in Kashmir and witnesses trees shedding their leaves. This is followed by the pruning of fruit trees towards the latter part of the month to save them from damages owing to snowfall. But this weather anomaly caught everyone unprepared.

The trees were still full with foliage and even some varieties of apple like Maharaji; Delicious and American were yet to be harvested. As the snow accumulated on the branches, they crumbled under its weight, resulting in large scale damage. 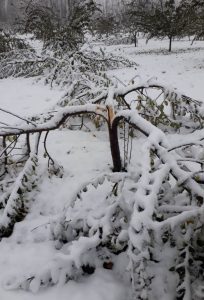 Snow accumulated on the branches of fruit-bearing trees, causing them to break.

While the director of horticulture in Kashmir, Maznzoor Qadri, said they were still in the process of collecting details from all districts, a senior official said the losses could be up to Rs 1,000 crore.

“Even if we assume that 20% is the average loss to orchards across Kashmir, it will [still] have [a] bearing on around five to six lakh fruit producing trees. Each hectare has around 255 trees and each fully grown tree on an average produces 20 boxes of fruit. A box each on an average fetches Rs 500 to Rs 700,” said the official. “You can now imagine the losses.”

On the other hand, the snowfall led to a complete blockade of the Srinagar-Jammu highway, where more than 5,000 fruit laden trucks – carrying 50,000 metric tonnes of fruit – were in transit to different fruit markets across India on the eve of Diwali, a time of year when fruits fetch hefty sums. “Since this fruit didn’t reach the markets in time, the prices will fall sharply,” said the official. “We are not taking this into account.”

Amid these losses, there is anger mounting against the government for failing to implement crop insurance schemes in the Valley despite the state cabinet’s nod to so in March earlier this year. The scheme has already been implemented in Jammu.

This criminal delay in its implementation means the entire burden of loss will fall on the shoulders of farmers. Kashmir’s business body, the Kashmir Chamber of Commerce and Industry (KCCI), took up the issue with governor Satya Pal Malik on November 5 and demanded adequate compensation to affected growers.

“We seek to know [the] reasons for Kashmir, having a production of more than 70% of [the] total produce [in the] country, being the only place deprived of this safety cover (insurance),” read a letter from the KCCI to the governor, demanding that the officials responsible for “criminal negligence” be brought to book.

Later in the day, during his interaction with the media, the governor said his administration will compensate the farming community. “We are assessing the losses,” he said.

But for Dar, this assurance means little. “I have lost 15 years of investment. At the most I will get a few thousand rupees from the government. Nobody except a farmer can understand what I have lost – and what this tragedy means for my family [for] years to come,” Dar sighed, his eyes filled with tears.