Why Kashmir's Saffron Fields Are Shrinking

A group of growers sitting together to collet saffron from flowers. Photo: Shahid Mushtaq

Pampore, Kashmir: A few years back, saffron growers in the town used large winter blankets to collect the harvested flowers from the fields. During the nights, the precious stems would be separated. Now, to collect the flowers, a few baskets suffice.

“Gone are the days when we used blankets, now not even tiny baskets get filled with such low produce,” rued one of the growers.

Saffron production has been falling continuously over the years and if that trend continues, the townspeople will lose a crucial source of their livelihood and the Valley, one of its most precious spices for which it is known across the world.

According to official figures, the annual production of saffron in the years 2017 and 2018 was 16.45 and 5.2 tonnes respectively and for 2019 the agricultural department estimates it to be 5.91 tonnes.

Dr Amjad Hussaini, a SKAUST scientist said, “Drought like conditions, erratic rainfall, and no irrigation are the main reasons for the decline in saffron production,” and added that due to climate change, the pattern of rainfall had changed, which has had adverse effects on saffron. 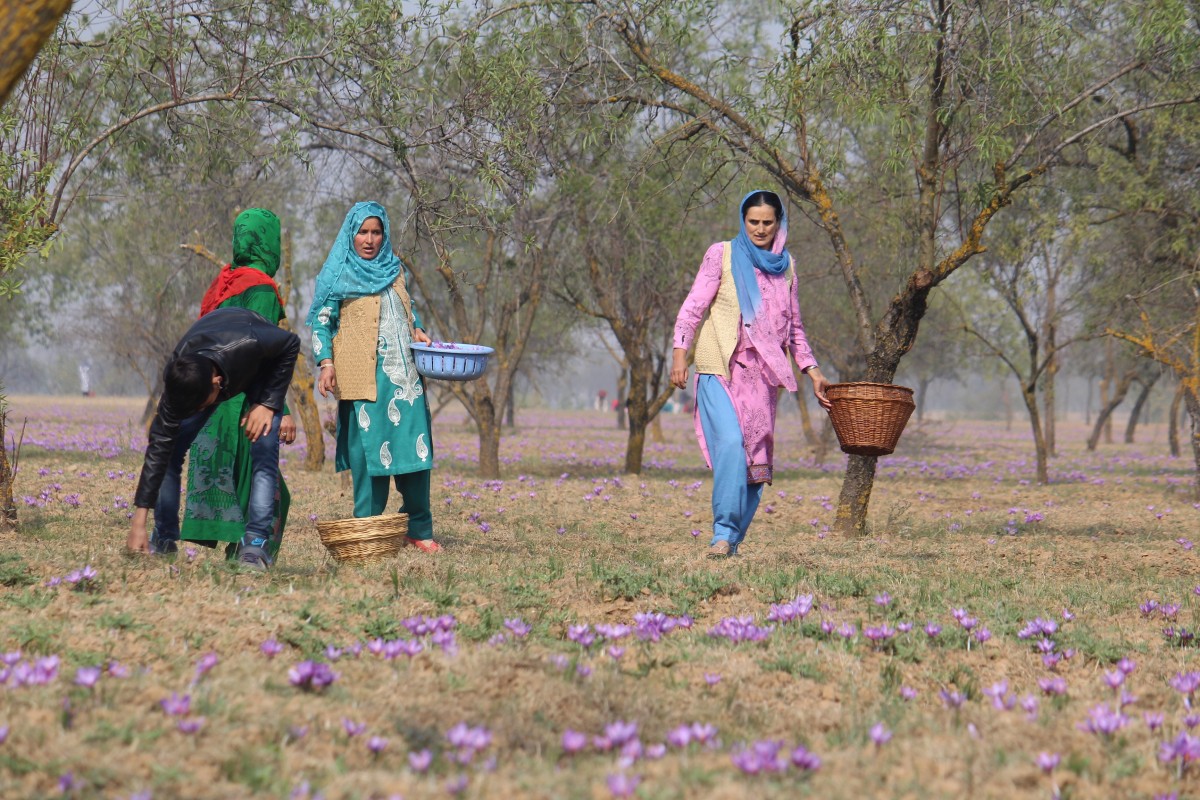 Members of a grower family collecting saffron flowers in basket from their land in Pamopre, Pulwama. Photo: Shahid Mushtaq.

Many people affiliated with the sector have already switched to other sources of livelihood, abandoning their land. Despite timely rainfall this year, most of the saffron fields have sporadic flowers with large distances between the plants, indicative of the poor produce. Official claims of a bumper crop this year ring hollow.

Even the much-touted National Saffron Mission has not helped in improving the production; instead, farmers have blamed it for exacerbating the situation.

“Usually before the mission, we were sowing seeds with a 4-6 inch gap. When the government intervened in the sector they brought a new type of seed and told us to wash the seed in a chemical, which we had done never before,” said Suhail Sultan, a grower from Pampore and added that the chemical killed their seeds, even before they could see it germinating.

Sultan has 15 kanals of land under saffron cultivation and is worried about his dwindling fortunes. He has shifted back to the traditional method of sowing seeds. On an experimental basis, his family had opted for the traditional method of sowing seeds on their two kanals of land, where production has not dwindled. They have concluded that the new method has contributed to the downfall of the sector.

The Wire spoke to many farmers in the area who voiced similar experiences.

“They told us to sow bigger size seeds (corms), instead of smaller ones, which we did earlier. When we did so, the crop almost disappeared from our fields and then as a test, we opted for the old tradition again and we found some chances of its revival,” said Aijaz Ahmad Lone, a saffron grower from the Khrew area of district Pulwama. 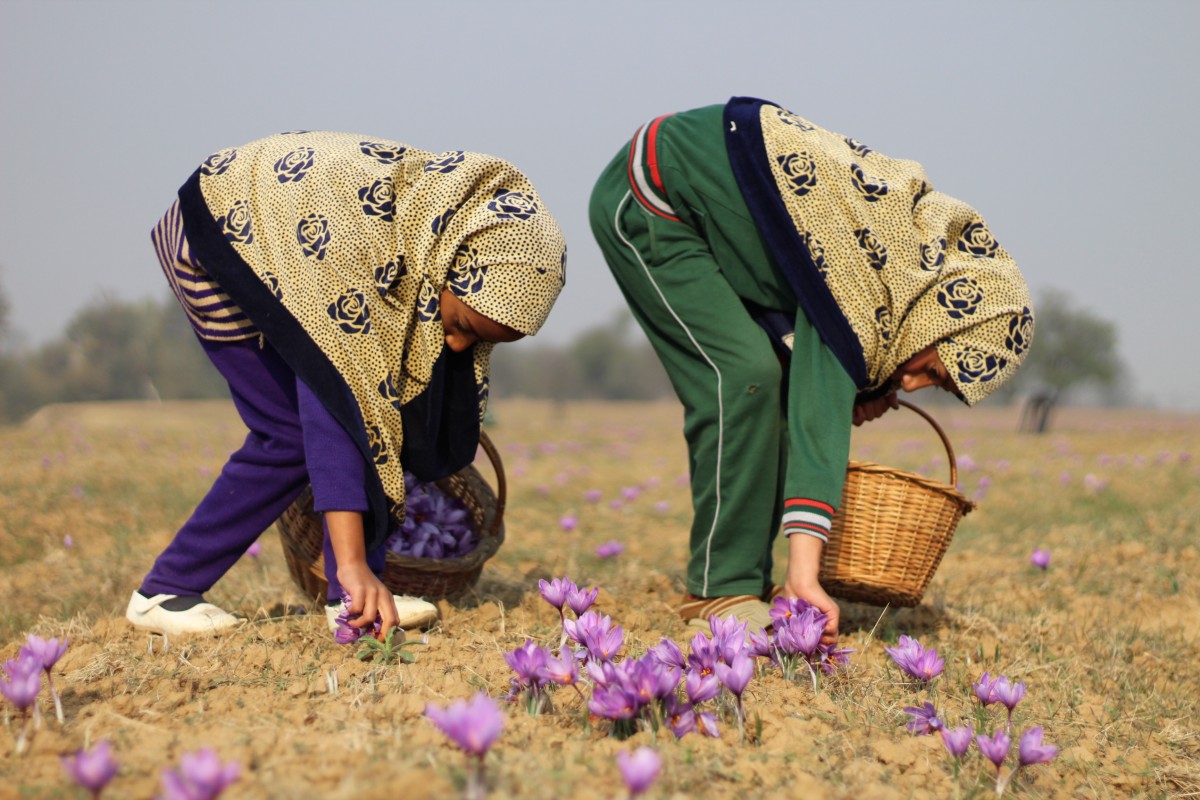 Young girls collecting saffron along with their parents (not in photo) from their fields in Lethpora. Photo: Shahid Mushtaq.

The 2014 floods, which brought heavy losses to Kashmir, also adversely impacted the saffron sector. The floods damaged the sources of irrigation in the saffron belt and washed away the roots. The crop, according to the growers, needed adequate irrigation at least thrice before two months of flowering.

In 2011, the central government initiated the National Saffron Mission to boost the sector, over Rs 400 crore was sanctioned and irrigation and seed distribution were identified as the basic components of the mission. Eight years after the induction of the NSM, irrigation arrangements are still not visible anywhere on the ground.

Syed Altaf Hussain Andrabi, Director Agriculture Kashmir, told The Wire that 3750 hectares (75,000 kanals) of land in Kashmir was under saffron cultivation. “Growers who registered their land under the National Saffron Mission were given Rs 25,000 per kanal, of which five thousand was given for irrigation,” he said.

Some of the growers said that despite laying pipelines and digging wells they were not provided water supply when their lands needed irrigation. Meantime,  there were sporadic or untimely rains in the following years which resulted in late or no sprouting at all. 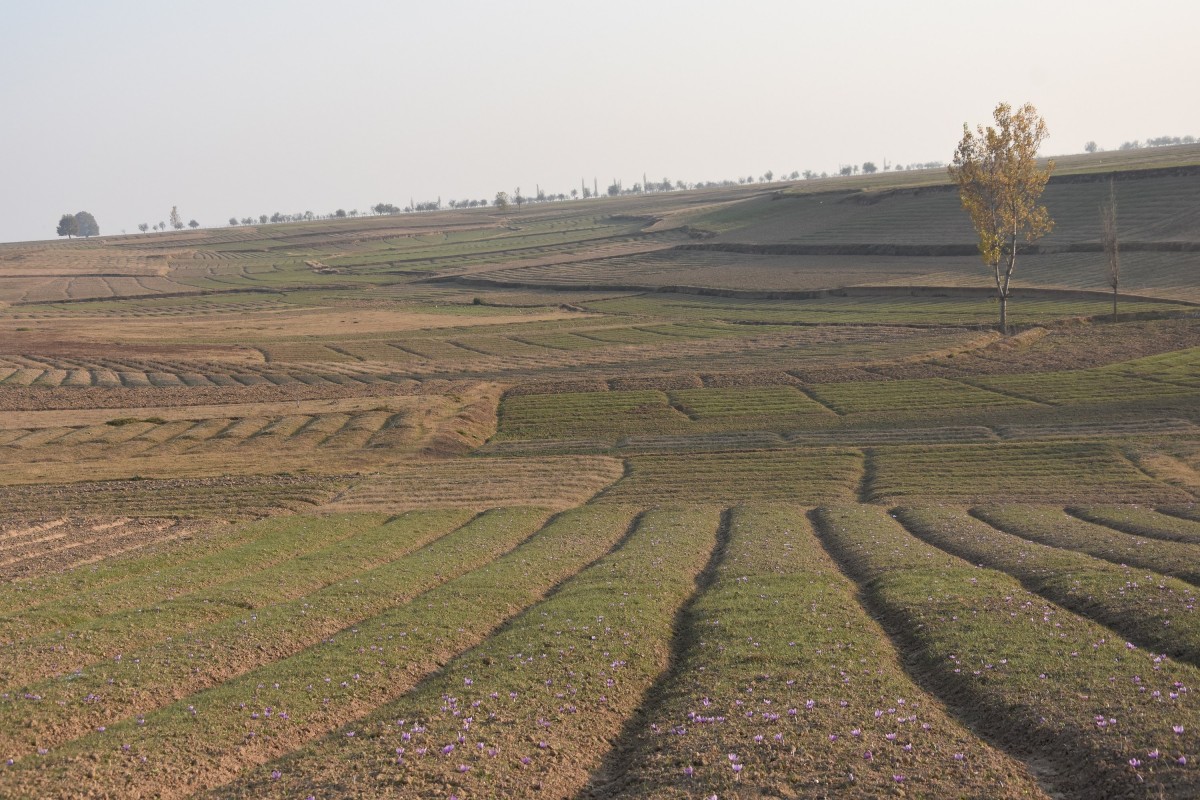 A vast saffron field with very few flowers and no irrigation arrangements in Lethpora alongside the Srinagar-Jammu highway. Photo: Raashid Hassan.

“The mission was a mockery with us, as crores of rupees were spent on papers without providing anything substantial to the growers, ” Aijaz Ahmad, a grower said.

In the Lethpora area of the town, growers said that this year, after a gap of five years, flowers have sprouted which has raised their hopes. Experts believe that the timely rainfall this year between the months of September and October was the lone reason that flowers were being seen in saffron fields.

“Earlier there were no rains at the needed time and, at the same time, the government failed to provide water supply to the said lands, which we had been promised a long time ago,” said Ishfaq Ahmad Yatoo, another grower.

Also read: Is It Too Late to Save Kashmir’s Purple Fields?

In Kashmir, saffron is grown mainly in Pulwama and Budgam districts. However, in the central district of Budgam, saffron land is shrinking and many growers have planted apple and almond trees on their land. Growers have said that the dwindling produce and the low market rates were responsible for their switch-over to other crops. Moreover, the soil lifting form in such areas according to experts has also shrunk the saffron land. 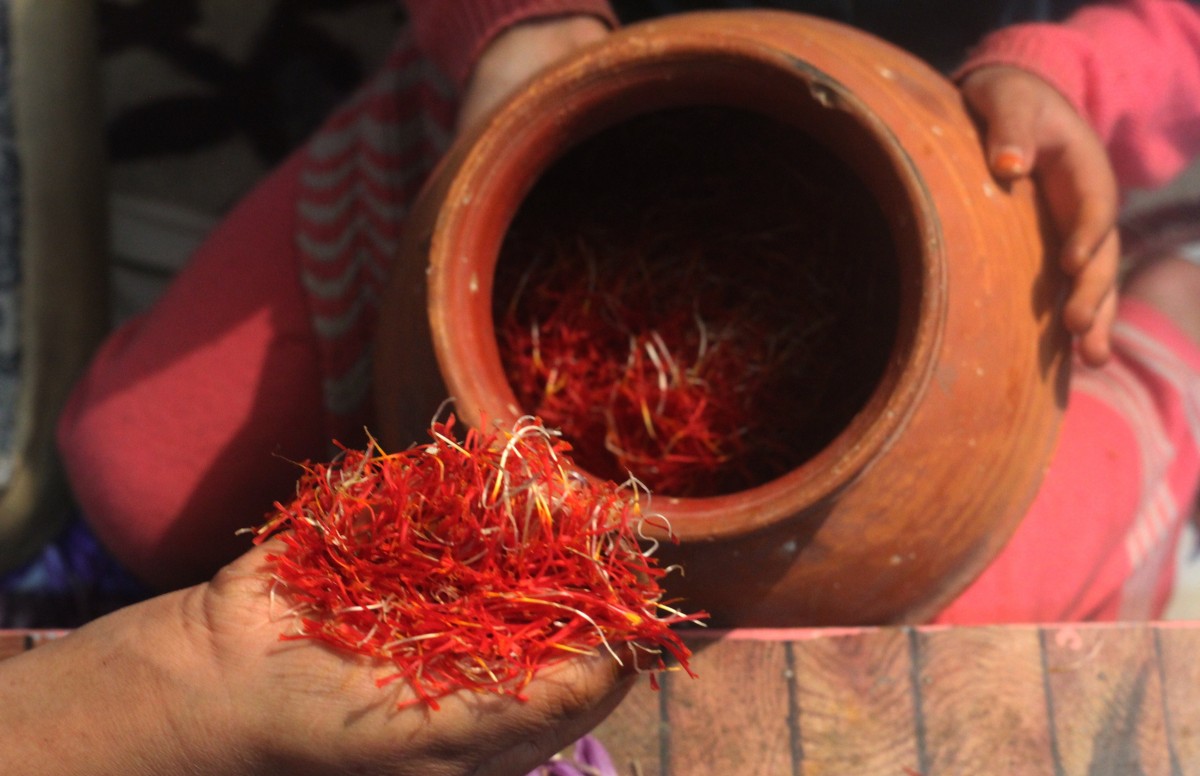 A grower displaying threads of saffron which he had stored in a mud pot before it got sold: Photo: Shahid Mushtaq.

Factories, mostly relating to cement, have come up in the areas adjacent to the fields. Besides affecting humans, the dust and smoke coming out of these factories have also affected the cultivation of saffron.

“When there is a rise in diseases among humans due to pollution caused by these cement factories, why would not it affect the growth of saffron? With the establishment of factories, we are witnessing even more of a decline in production,” said Rouf Ahmed, another grower.

Pollution generating factories have come up in areas like Khrew and Lethpora in the town, which also fall in the saffron growing belt. Earlier, people from the areas had protested against the lackadaisical attitude of the authorities towards the issue of factory pollution. 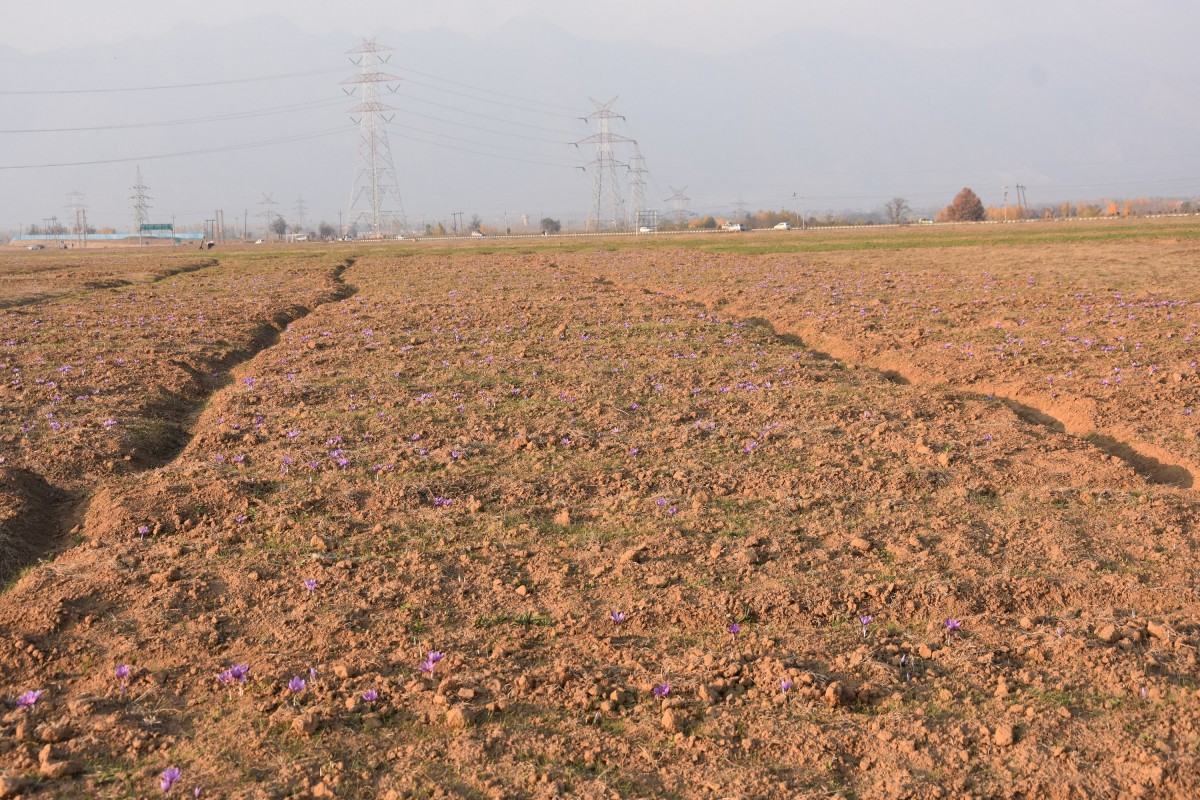 Experts this reporter talked to, however, believed that pollution has a very minimal role in the decrease in production.

Dr Ghulam Hassan Pir, a senior pathologist at Sheri Kashmir Agricultural University of Sciences (SKAUST) deputed to the NSM, told The Wire that several factors were responsible for the downfall of the sector.

He claimed that the faecal matter of the grazing livestock in the said fields provided it with nutrients that helped in productive crop, but with the decline in the local livestock, that does not happen anymore.

“It was found that the manure coming from the grazing flocks of livestock in fields provided suitable nutrients for saffron but, with the decline in local livestock, no grazing in such fields takes place and hence there is low production,” he said and added that it also kept land rodents at bay.

On the use of larger corms, Pir said that it was followed with the intention that production value per hectare would increase. He claimed that the farmers in the area looked for short-cuts to increase production but it had failed.

Also read: Loss to Farmers in Kashmir Could Be More Than Rs 7,000 Crore: Farmers Body

“Saffron fields need to be ploughed at least a dozen times during a year, which is what growers had done, but within a month or two, and it had its adverse effects,” he said. He added that the growers did not follow the advice of the scientists. Once the seeds were washed with the pesticides, they had to be dried before sowing, which they failed to do.

Use of inexperienced labour

Kashmir has remained heavily dependent on non-local labourers and saffron growers to plough or remove weeds in the fields. According to experts, the labourers are not aware of the growth and sensitive nature of saffron. Often while working, they cause injuries to corns, resulting in damage to seeds, and thus the produce.

The government before introducing the NSM, didn’t properly spread awareness amongst the farmers. An official said that the government gave Rs 25,000 to people for every kanal of land, which mislead the growers. “When we are introducing a new thing, it eventually needs awareness. Government at that time introduced new methods to boost the sector, but people found those opposite to their traditional farming practice, “said an official wishing not to be named.

Professor Bashir Ahmad Illahi, head of the Saffron Research Station,  however, believes that there was no communication barrier and that many of the traditional growers were not ready to implement modern scientific measures.

Meanwhile, SKAUST, considering the challenges faced by saffron and other vegetable growers in Kashmir, has identified some beneficial microbes that work against soil-borne diseases, particularly of saffron.