Some growers have claimed that by not sending their produce to different markets, they are registering a mark of protest against the Centre's decision to revoke Kashmir's special status.

Fallen apples are thrown in the waste alongside cow dung after the lack of sales in the aftermath of the Centre's decision to read down of Article 370 in Kashmir. Photo: Raashid Hassan

Shopian, Kashmir: With uncertainty looming large, apple orchardists in Kashmir are now sun-drying the fallen apples before the harvesting season picks up. Earlier, the same would be sold for Rs 300-400 per box in markets outside the state.

Even the government’s market intervention scheme launched after the scrapping of Article 370 has not had many takers in the Valley.

The “futile” but time-consuming trend is being followed in many parts of South Kashmir where people can be seen making small slices of apples to be put under the open sky to dry.

According to experts, drying apples is a futile exercise and has no market value but can be used as fodder for animals for the forthcoming winters.

Orchardists told The Wire that they plan to make dried slices of the apples as half of their produce has ripened and fallen from the trees. The fall of the apple downgrades the value of the fruit, which then sells at one-fourth of its original price.

“We don’t want to let this precious fruit become rotten in orchards. We are trying to at least make fodder out of it for animals,” Ghulam Muhammad Bhat, a resident of Chitragam village of Shopian said. He also said that his village, comprising of 1,500 households, mostly depends on apple farming for its livelihood. The village, according to him, produces 12 lakh apple boxes a year, of which 50% has ripened and is now falling from the trees.

Orchardists and traders have called the government launched scheme unplanned. Under the scheme, the government has announced that it will purchase the fruits directly from the growers after quality checks and grading. 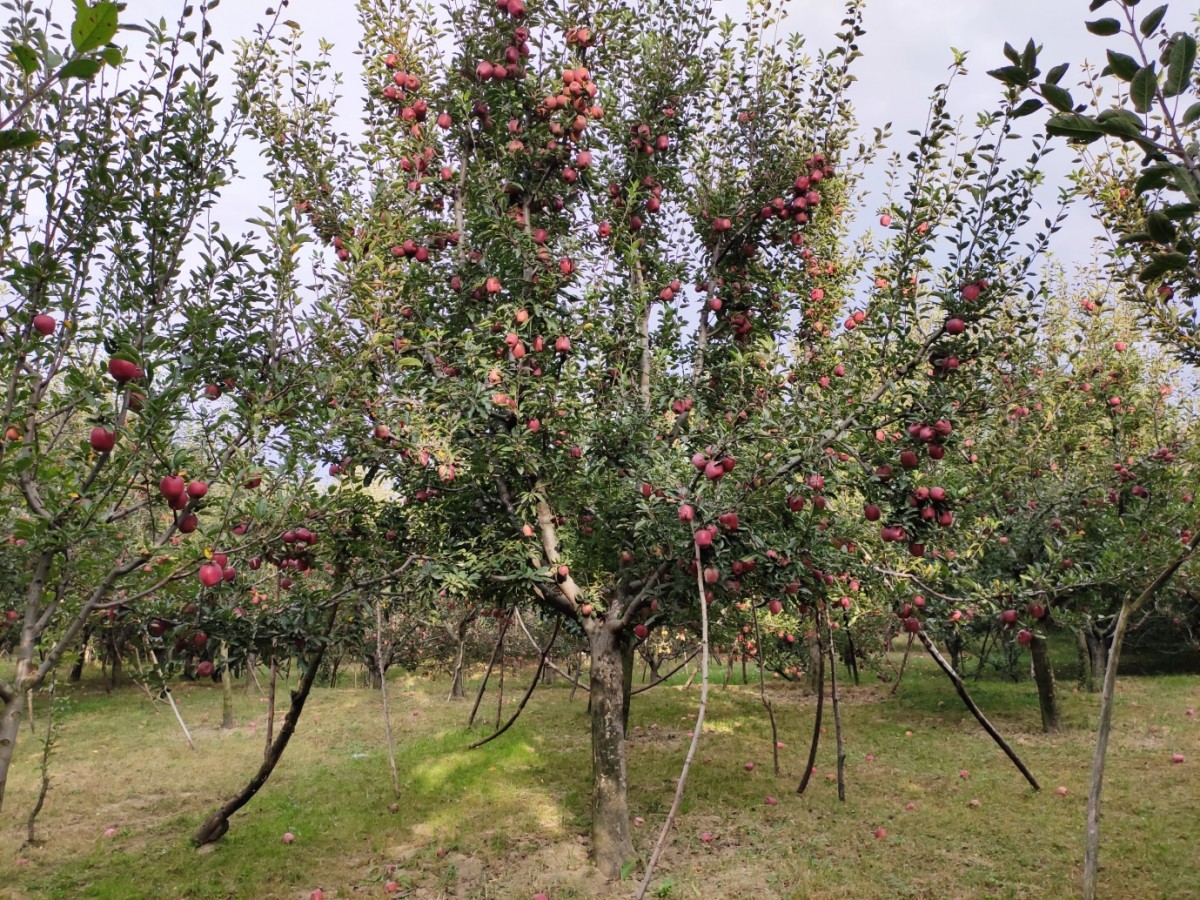 A ripened apple orchard, in a village in Shopian district, left abandoned by the owner due to uncertainty in Kashmir. Photo: Raashid Hassan

However, traders and growers said that they had already taken debts from outside markets for apples and other fruits and would not be able to sell their produce to the government while sidelining the very traders from whom they had already taken money. “What will we pay to the traders who gave us money for apples, that too a year ago? We are bound to pay them in fruit,” Muneer Hussain, an apple trader, said.

After the reading down of Articles 370 and 35A by the Centre in August, life in Kashmir has come to a standstill. South Kashmir, which is considered the epicentre of militant activities and unrest, is heavily dependent on apple farming. The area is, once again, taking the brunt of the complete shutdown and communication lockdown.

“We know there is no chance where ‘normalcy’ can resume. The chances of war are there but we don’t want to waste our fruit for nothing. We know the exercise (sun drying apples) is a futile one but God forbid if a war breaks out, it will act as food for us during the winters, ” another local, Showkat Ahmad Shah, said.

The harvesting season peaks during the last days of September, but a majority of the orchardists in many parts of South Kashmir told The Wire that they had decided to skip picking up the apples primarily due to the uncertainty ahead.

A section of growers is of the opinion that, by not sending their produce to different markets, they are registering a mark of protest against the Centre’s decision to scrap Articles 370 and 35A of the constitution which promised special status to Jammu and Kashmir.

Another group of people are following the guidelines enumerated in posters that have been put up in public spaces by unidentified persons in almost every nook and corner of South Kashmir. The posters, which bear the stamps of the Hizbul Mujahideen militant outfit, have barred people from gathering apples. The posters advise people not to pick or send their apples to mandis based in different parts of India. 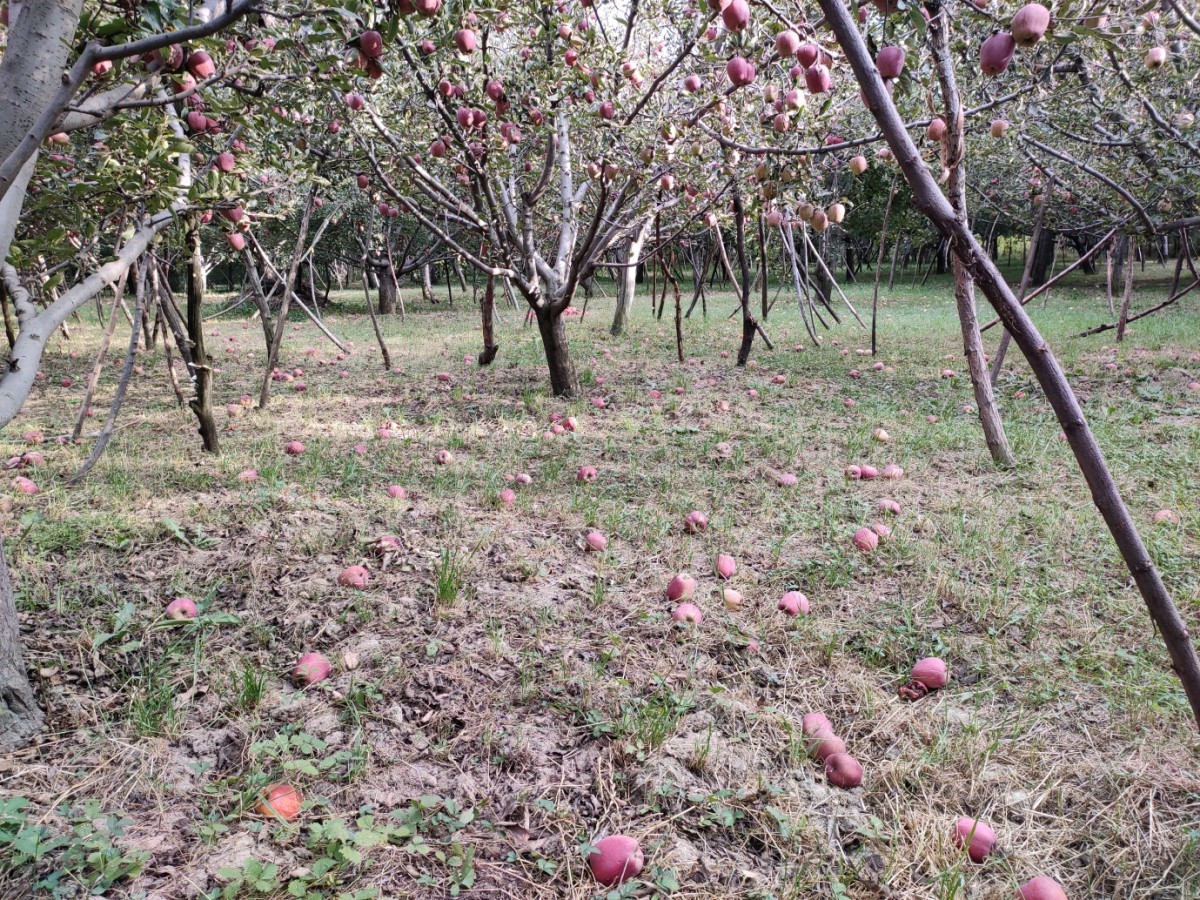 An orchard where half of the apple produce has fallen but the grower is yet to pick it up. Photo: Raashid Hassan

According to locals, apple boxes had been torched during the night and trees had been cut down by unknown persons at different places in Pulwama and Shopian districts. In certain places, apple carrying vehicles had also been damaged.

Director Horticulture Kashmir Ajaz Ahmad Bhat told The Wire that, “This year, Kashmir has produced 23 lakh metric tons of apples and, instead of sun-drying the produce, the farmers should send the apples to juice factories based in Jalandhar to get satisfactory rates.”

Al-Jazeera reported has accessed that if the situation in Kashmir remains same then there would be a loss of two billion rupees to its horticulture sector.

It’s pertinent to mention here that Kashmir’s economy is heavily dependent on horticulture, and if the circumstances following the reading down of Article 370 do not improve, the sector is going to face huge losses. This year Kashmir, according to the horticulture department, has had a bumper apple crop excluding some areas where the crop was damaged by hailstorms during the summers.

Orchardists also had to face huge losses in the sector due to a highway ban imposed by the government in the aftermath of Pulwama attack this year. In addition, the closure of the Jammu-Srinagar highway due to inclement weather, which brought heavy avalanches and landslides on the highway, resulted in heavy losses for the orchardists.

The closure of the highway brought about Rs 2,500 crore in losses to the orchardists in the Valley. Experts believe, that the government, like in the past, failed to maintain the demand and supply chain which reduced the market rates of apples from Kashmir.

According to a top revenue official posted in South Kashmir, around 700 villages in the region have been badly affected as far as the horticulture produce is concerned. “I don’t think there is any rate for sun-dried apples and I am stunned to know that they are doing this. If they are doing it on their own, then we have no issues with that whether they waste it or do anything else to it,” he said. 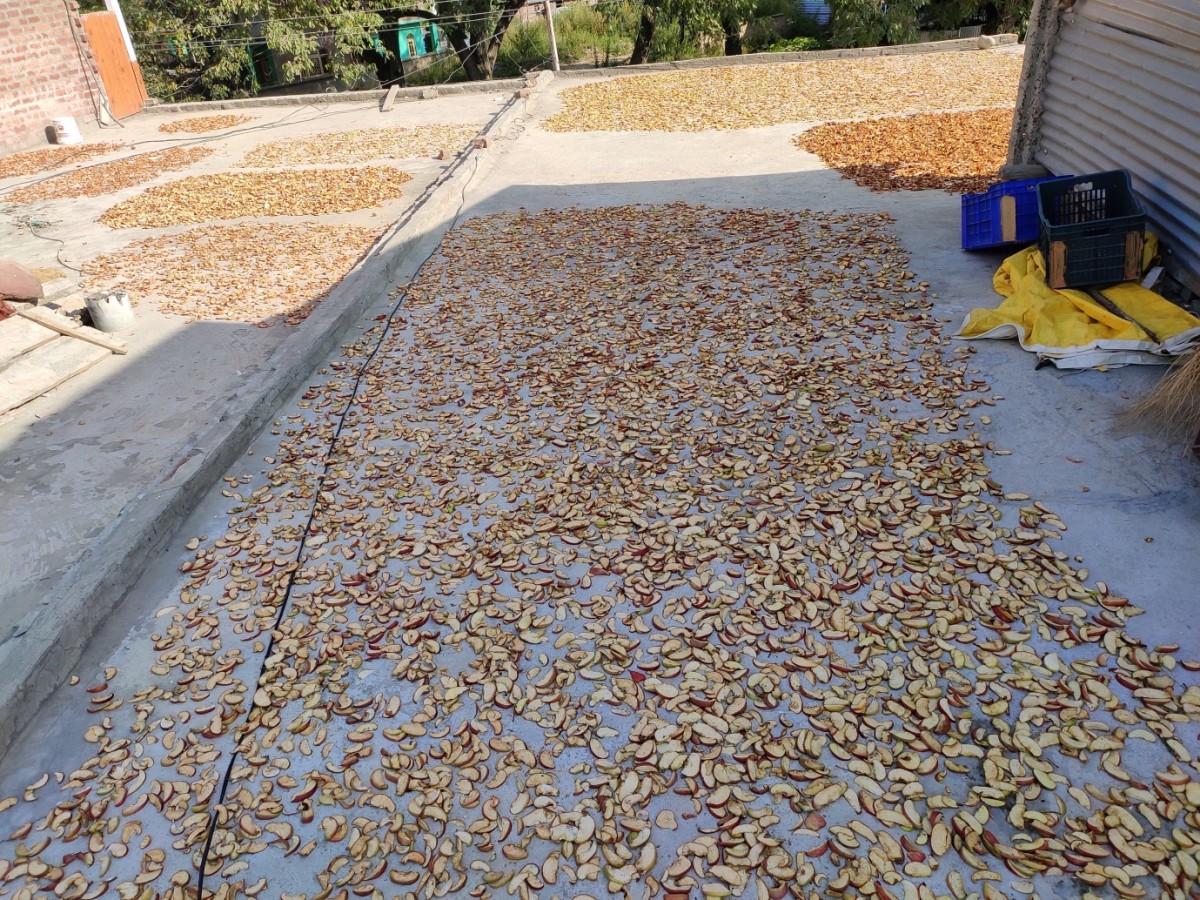 Slices of apple left to dry on the terrace of a house in a village in Pulwama. Photo: Raashid Hassan

The number of cold storage units in Kashmir is very low and they have a storage capacity of only one lakh ton. There is no government-run cold chain in the Valley and people have no option left to preserve their produce until the situation improves.

In areas like Koil, Molu-Chitragam, Babapora, Arihal, Heff, Zainpora, Rajpora and other areas in the district of Pulwama, Shopian and Kulgam, 30% of the Kulu-Delicious apple produce has fallen after crossing the maturation period. Some growers have sun-dried the fallen apples but others have left them to rot in orchards.

Usually, only two apple varieties, the Maharaji (Malos Domestica) and Bum-Cxont (Cydonia Oblonga) are grown in Kashmir which have been dried for decades for to their medicinal value. The two varieties aren’t produced on a scale that could bring any considerable value to the growers and, consequently, would not end the looming crisis which the Kashmir horticulture sector is facing.

Also read: ‘Kashmiris Should Be Given Freedom to Take Their Own Decisions’: Punjab Farmers

According to the Economic Survey 2017, 3.4 lakh hectares of land is under fruit cultivation of which 48% is used to grow apples and is the primary source of livelihood for about 34 lakh people or about seven lakh families.

Director Horticulture Kashmir, Ajaz Ahmad told The Wire that 19 lakh tons of apples were produced by Kashmir last year and that one lakh ton was stored in cold chains.