The apple traders and growers of Kashmir have written to Prime Minister Narendra Modi, appealing him to intervene and save the industry which provides livelihood to lakhs of people.

Srinagar: Kashmir-based apple growers and sellers have been up in arms with the import of allegedly untaxed (illegal) apples from Iran, which have been selling in bulk and at cheaper rates than local apples in markets outside the Valley. Consequently, a substantial amount of local produce has been languishing unsold in cold stores and godowns in Kashmir, with the local apple economy incurring losses.

Those involved in apple produce and trade have now written to Prime Minister Narendra Modi seeking his intervention to help them tide over the losses suffered due to the import of untaxed Iranian apples into the country. 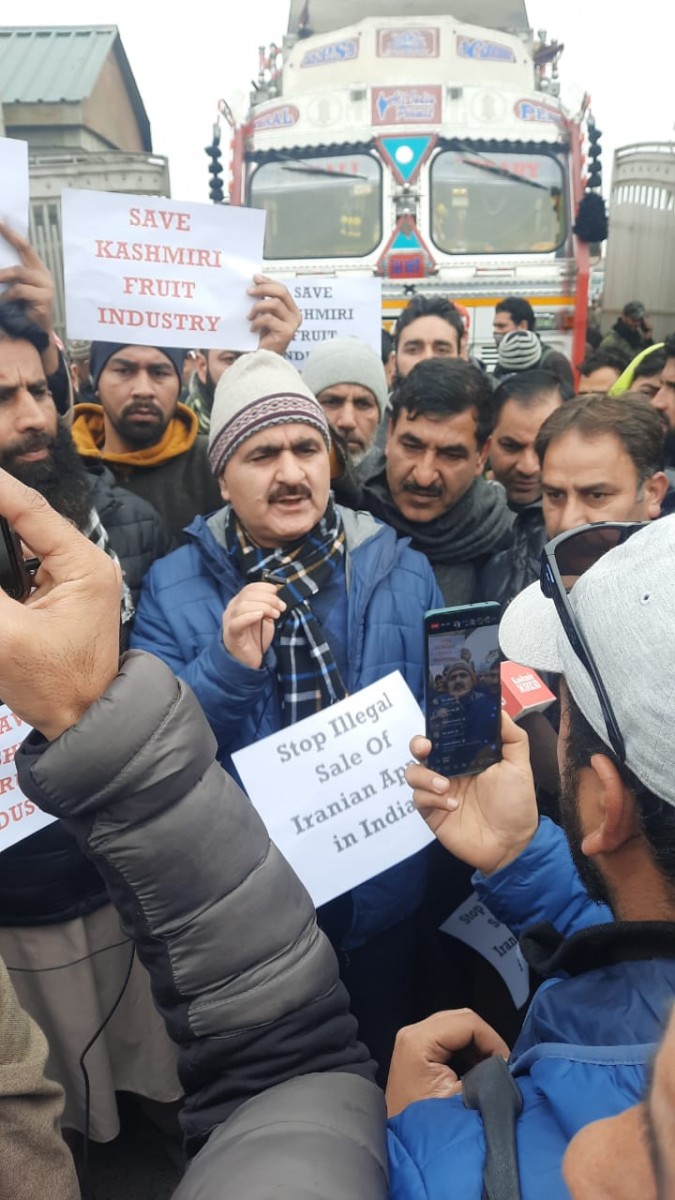 Apple traders and growers protest against the ‘illegal’ import of apples from Iran. Photo: By arrangement.

Stating that India is one of the world’s largest producers of apples, the letter adds that about 70% of households in Jammu and Kashmir are directly or indirectly dependent on the sector.

The letter draws the attention of the prime minister towards the “illegal and unlawful dumping of Iranian apples in our country”, which the fruit growers union says is “not only disastrous for small and marginal growers of J&K (UT)/ Himachal Pradesh but also results in huge losses to the exchequer”.

The fruit growers and dealers union have also requested the prime minister to either “impose a ban to restrict the flow of Iranian apples via Afghanistan/Dubai into our country in order to save the horticulture industry of UT of J&K and Himachal Pradesh as well” or “impose a 100% import duty on the Iranian apples to this country”.

“Iranian apples are being imported from Dubai and Wagah border and are being sold at cheaper rates. Due to this, our apple business is losing out. Our produce is confined to cold stores and godowns in Kashmir, which may spoil soon if the situation doesn’t get better.”

“We have about three crore apple boxes in cold stores and godowns which are yet to be sold in markets outside as the Iranian apples have flooded the markets and damaged the market share for our apples,” laments Ahmad.

Echoing the sentiments of local apple growers and traders, Ahmad urges the Union government to ban the import of Iranian apples into Indian markets to prevent further damage to Kashmir’s apple economy.

“If Iranian apples are still imported, there should be a 100% import duty on these apples, so that they do not dent our market share,” he adds.

With the contribution of Rs 10,000 crore to Rs 12,000 crore to the fragile Kashmiri economy, Ahmad adds that it is the local horticulture sector that provides livelihood to lakhs of people.

“This government emphasises on producing and consuming our own produce within the country under slogans like ‘Make in India’. But, Iranian apples sold in Indian markets like this will destroy Kashmir’s apple economy and further discourage small scale apple growers of Kashmir,” he adds.

Fayaz Ahmed Malik, the president of Fruit Growers Association from north Kashmir’s apple town Sopore, says that about 15% to 20% of apple produce is still lying in cold stores and godowns in Kashmir.

“About four crore Kashmiri apple boxes are still lying unsold here and outside the Valley. Lakhs of apple boxes are yet to be transported to markets outside as our business has been disrupted and badly affected due to Iranian apples,” he says, adding that Iranian apples are being “illegally” imported into India via shipping ports in Gujarat.

“Our apples would be sold in Indian markets throughout the year, but now customers are getting Iranian apples at cheaper rates, destroying our business,” says Malik.

If earlier a box of Kashmiri apples, he says, was sold at Rs 1,000 to Rs 1,200 in the markets outside the Valley, now the rate has come down to about Rs 600 to Rs 700 after the bulk importing of Iranian apples into the Indian fruit market.

“Apple produce in large quantities are still stuck here, as market rates are low. People are preferring Iranian apples sold at cheaper rates. We are incurring additional losses because we have to transport unsold produce from the markets to cold stores and godowns,” he rues.