Confronted by angry farmers in Karnataka, the BJP president answered their questions but took liberties with the truth. 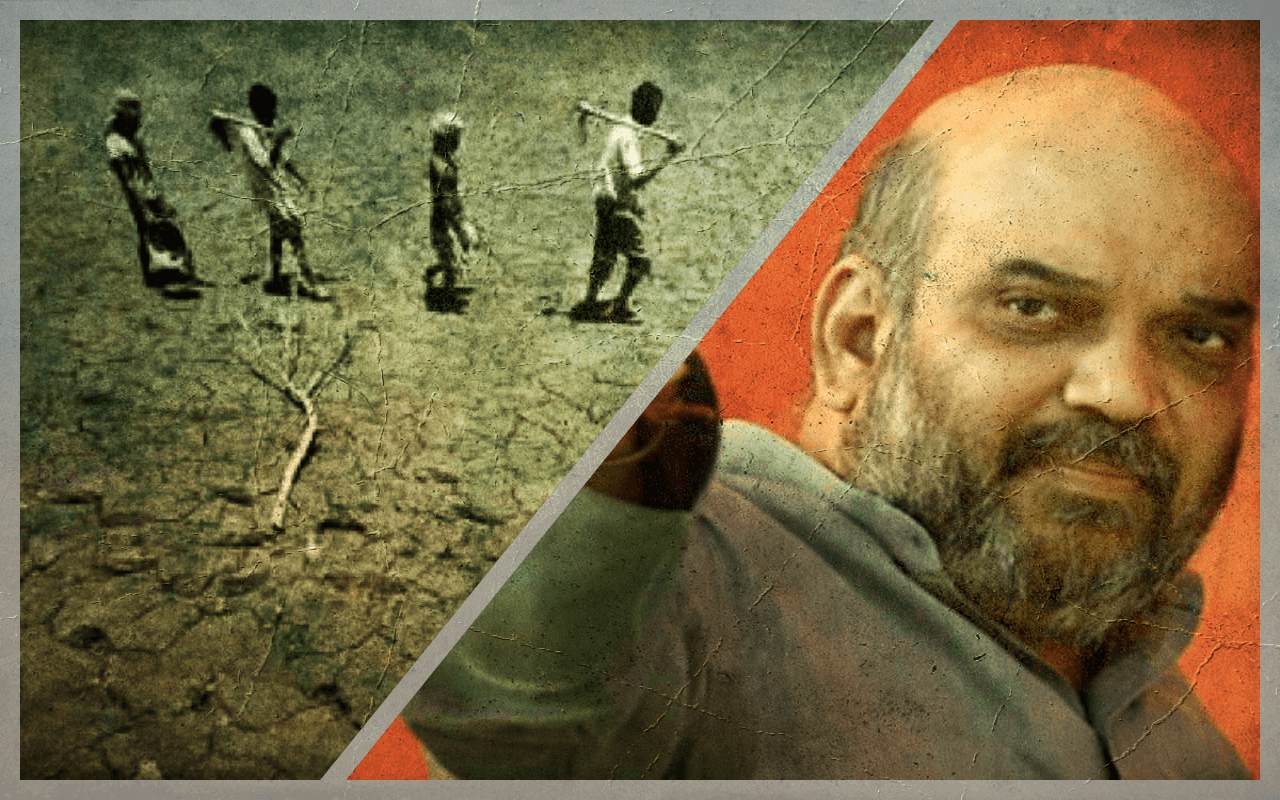 The BJP’s attempts at reaching out to farmers in poll-bound Karnataka went awry when on Sunday, Amit Shah, BJP national president, was cornered by farmers while addressing a meeting in Bidar district of North-Eastern Karnataka. Farmers were upset with the BJP-led Central government’s failure to fulfil several farm-specific promises made during the 2014 Lok Sabha campaign.

During the course of Shah’s speech, he was frequently interrupted by farmers who claimed he was being economical with the truth. A video clip that has emerged also shows a farmer who was airing his grievances being manhandled and his mic being snatched away allegedly by BJP workers. The BJP has denied that they were party workers.

The farmers posed some difficult questions to Shah. We examine Shah’s responses and claims in contrast with the facts.

Shah claimed that the government has already implemented the Swaminathan Commission report and Minimum Support Price (MSP) at cost plus 50% has already been announced.

Farmers at the meeting pointed out to Shah that the recommendations of the Swaminathan Commission 2006, which the BJP in its 2014 campaign had promised would be implemented once it came to power, are yet to be implemented. “Specifically, we asked why the Centre has still not set MSP at cost plus 50% as recommended by the Swaminathan Commission,” said C.K. Ravindra, a farmer present at the meeting.

Amit Shah, in his response, said, “The finance minister in his budget speech this year announced that we are accepting the Swaminathan Commission recommendations. He has already announced that for kharif and rabi crops MSP will be set at 1.5 times the cost.”

Shah’s claim created furore among farmers at the meeting. “He was obviously not speaking the truth. And everyone at the meeting got angry and started shouting. What was announced in the budget was a reduction in the cost taken as base to calculate MSP. They are giving 1.5 times based on a lower estimate of cost,” said Ravindra.

Ravindra is spot-on. As The Wire had pointed out after finance minister Arun Jaitley’s budget speech, his claims of having set MSP at 1.5 times the cost of production were misleading. “Government has decided to keep MSP for all the unannounced crops of kharif at least at one and half times of their production cost,” Jaitley had said, without specifying which cost will be taken into account.

The Commission for Agricultural Costs and Prices (CACP), which declares MSP for eligible crops, has three different definitions of productions costs – A2 (actual paid out cost), A2+FL (actual paid out cost plus imputed value of family labour) and C2 (comprehensive cost including imputed rent and interest on owned land and capital). As is evident, C2 > A2+FL > A2.

Farmer organisations for several years have been demanding that MSP be set at 1.5 times C2, i.e., comprehensive cost, as recommended by the Swaminathan Commission. “The report (Swaminathan Commission) made it clear that it was C2 that was to be taken into account and not A2+FL,” said Yogendra Yadav, political activist, psephologist and founder of Swaraj Abhiyan.

In addition, when Narendra Modi, during his Lok Sabha campaign, promised that MSP will be set at 1.5 times the cost of production, it is C2 that he must have meant as MSP for most crops was already higher than 1.5 times cost of production taken as A2+FL.

As was confirmed to The Wire by agriculture ministry sources, and as the finance minister later clarified in the Rajya Sabha, it is A2+FL that he had in mind and not C2 while making the announcement in his budget speech. The clarification made Jaitley’s claim in his budget speech that the government was ‘fulfilling’ its poll promise tenuous.

Whether A2+FL or C2 is taken into account while calculating MSP matters significantly for farmers as the difference between the two is substantial. For wheat and masur, for instance, the difference is 53% and 57% respectively.

Shah promised that if BJP is voted to power, sugarcane farmers will be paid on time, like in Uttar Pradesh.

Amit Shah claimed that since the BJP came to power in UP, sugarcane farmers have been paid on time and that all dues for the current season (2017-18) have been cleared.

However, as per data made available by the UP government on February 19, unpaid sugarcane dues in the state amount to Rs 4,384 crore – 25 % of total dues. The statistics also disprove Shah’s claim that the BJP government in UP has ensured timely payment for sugarcane farmers. According to the data, only Rs 329 crore has been paid on time, which translates to 2.4% of total amount paid and 1.5% of total amount due.

“The BJP government has made very little difference to sugarcane payment in the state. No sugar mill is paying within 14 days as the BJP had promised. In the current season, the situation is extremely bad as many sugar mills are yet to clear dues of November, and we are nearing the end of the season,” said Kuldeep Tyagi, president of the Bhartiya Kisan Andolan, a farmer organisation in the sugarcane belt of Western UP.

‘We have not waived any corporate loans’

Angry farmers at the meeting took on Amit Shah for what they called the Central government’s pro-corporate and anti-farmer tilt. “You have adequate money to waive corporate loans of Rs. 17,15,000 crore and don’t have money to waive farm loans of Rs. 12,60,000 crore. You must know that it was the farming community and not just industrialists who voted you to power,” said a farmer at the meet as reported by The Hindu.

To this Shah responded by saying, “I can guarantee to you that since the Narendra Modi led BJP government came to power in India, we have not waived a single rupee of any industrialist.”

However, the farmers at the meet, took this response with a pinch of salt. “This is another jumla. So many industrialists have taken loans, not repaid, and fled the country. The government is now repaying loans on their behalf. That is what we pointed out to Amit Shah and he did not respond with the truth,” said Ravindra.

Bear in mind, the intervention of farmers at the meet came in the backdrop of multiple bank frauds worth billions of dollars involving wealthy industrialists which have recently come to light. A few months to prior to the frauds becoming public, the Central government announced a Rs. 2.11 trillion-rupee bank recapitalisation plan for public sector banks to deal with the problem of bad loans.

Farmers across the country have been protesting against what they call a bail-out for corporates. “When industrialists who lead a luxurious life-style don’t repay their loans the government pays the banks on their behalf. But, when farmers, who can’t even feed their families demand a loan-waiver, the Central government refuses,” said Harpal Singh, member of the Rashtriya Kisan Mahasangh, a coalition of 62 farmer organisations across the country.

According to a report in the Indian Express, public sector banks have written-off Rs 3,60,912

Devinder Sharma, agriculture policy expert, argues that this implies that industry and services sectors benefitted more from the loan write-off than agriculture. “The write-offs are primarily for corporates. Much of the farm credit is also taken by agribusiness companies and not by farmers. Loan write-offs for corporates have grown exponentially in the last few years,” Sharma said.

Sharma also contended that the bank recapitalisation package announced by the Central government amounted to a loan-waiver for corporates. “What else is it? Those loans are not going to be repaid and the banks will write-off those loans from their balance sheet. Eventually, the tax-payer will pay for the non-payment of loans by corporates,” he said.

But, is it fair to equate farm loan-waivers with bank recapitalisation mechanisms involving corporate loan write-offs?

Yogendra Yadav weighs in. “It is absolutely fair to equate the two. Bank recapitalisation, corporate loan write-offs, and corporate debt restructuring are simply dressed up versions of loan-waivers. Those loans are not going to come back. The banks know it and the government knows it. So, these are essentially loan-waivers,” he said.

Gulati also argued that bank recapitalisation on its own, like farm loan-waivers in agriculture, is a half-baked measure which would be needed from time-to-time if not accompanied by substantial reforms.

So, were the farmers in Karnataka right in arguing to Shah that the Centre has different standards when it comes to dealing with corporate debt and farm debt?

“Absolutely, it would actually be polite to call it a double standard. It is a lack of conscience disguised as economic argument. It is Amit Shah’s job to shout lies and that is what he did in Bidar,” said Yadav.

Aside from the factual inaccuracies in Amit Shah’s claims, the meeting with farmers in Bidar did not go according to plan as farmers were constantly heckling and interrupting Shah as he spoke.

“This is what happens when all you do is make lofty promises and don’t follow it up with any work. Amit Shah made all false claims in the meeting with farmers, and he was found out by angry farmers. The BJP assumes that farmers are dumb, but that is absolutely not the case as was evident in Bidar,” said BR Patil, Congress MLA from Aland, also in North Eastern Karnataka.

Bhagwanth Khuba, BJP MP from Bidar, was present at the meeting and asserts that too much should not be read into the heckling by farmers. “It is in their nature to do so. Everyone wants to speak and everyone wants to be heard. Farmers are also divided into several factions, so they also try and shout down each other,” said Khuba.

However, a BJP leader from the state said on the condition of anonymity that the attitude for farmers came as a rude surprise. “I was surprised to see the level of anger that was expressed. That is not how the meeting was supposed to go. It is something that the party leadership should take note of very seriously,” said the leader.