'PM Modi Under Pressure From Ambani, Adani; Repealing Laws Not in His Hands': BKU Leader Jalandhar: Bharatiya Kisan Union (Ekta Ugrahan) president Joginder Singh Ugrahan on Friday, March 12, said that repealing the three controversial farm laws was not in the hands of Prime Minister Narendra Modi, as he was under “acute pressure” from industrialists Mukesh Ambani and Gautam Adani.

Ugrahan said this was not a runaway claim but was revealed by Union agriculture and farmers’ welfare minister Narendra Singh Tomar during the last meeting between the Centre and farmers’ unions on January 15.

Addressing a gathering at the ‘Mazdoor Kisan Ekta Maha Rally’ at Muthada Kalan village in Jalandhar district, the BKU (Ekta Ugrahan) president said, “You will be surprised to know that Tomar had said that if he [Modi] accepted our demand to repeal the three laws, then the next day Ambani and Adani would come.”

The industrialists’ method would be different, Ugrahan alleged.

“Have you ever seen Ambani and Adani blocking the roads and railways? They will not come out here on the roads. Rather, they will pressurise you,” he said.

The farmers’ leader said that Tomar had not meant to divulge this.

“Actually, Tomar said this by mistake, as it was not in their policy to share such information with us. This proves that whatever may be happening, Adani and Ambani are pressuring the government and that is why these three black laws have been brought,” he said. Loud slogans of “Kisan mazdoor ekta zindabaad” followed.

Ugrahan said that PM Modi, in his addresses, keeps pointing out that no farmer would lose land under these three laws. Ugrahan said farm labourers lost their jobs due to machines and that farmers came under severe debt and were driven to suicide. “Such is the crisis, that by 2014, more than two lakh farmers left farming in Punjab. Similarly, under these three black laws, farmers would be ruined beyond imagination, they would be left with no option but to sell their lands to big landlords and the corporates,” he added.

Ugrahan said that it is for this reason that they have decided to protest against Punjab chief minister Captain Amarinder Singh over the promise of a farm debt waiver. “Punjab is heading for assembly elections in 2022 and we would hold the Captain’s government accountable and ask after his poll promise, on the basis of which he came to power in 2017,” he said.

Ugrahan had earlier said that the debate on the farmers’ protests and human rights violations by the UK parliament was a big win for farmers. “Whether it is the UK, the US, Canada, Germany or Italy supporting us or holding protests outside Indian embassies, it is a big support to our cause. From being a national issue, the farmers protest has become a global subject,” he said, adding that the biggest achievement of farmers’ protest is that they have received massive public support. 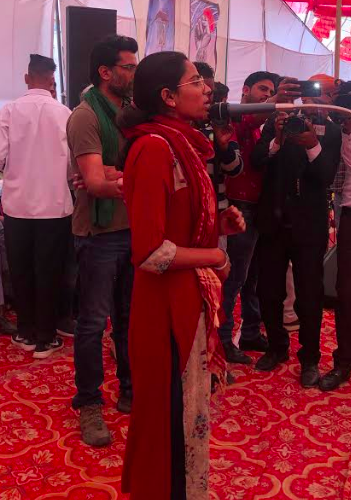 “It is fine that the UK parliament or any other leader has come out to support us but that cannot be termed the real victory. The real achievement would be people’s support. They declare support, but these leaders ensure that people in their country or state don’t come out on the roads,” he said.

Mansa also said that the real agitation started after January 26, as people became serious about their cause. “Earlier, it was a ‘mela’, now it is ‘andolan’ in real sense,” he added.

Among others who addressed the gathering was labour activist Nodeep Kaur, who was present along with activist Shiv Kumar. The duo represents ‘Mazdoor Kisan Sangathan’, which they formed in 2018 to fight for the rights of labourers.

“I was protesting against the new Labour Code Bill 2020 introduced by the Modi government, when I was arrested. During COVID-19, many labourers lost their jobs, others were denied pending salaries and many ended up working on meagre wages. Both of us have been fighting for the cause of labourers and after joining the farmers’ protest in a bigger way now, we are going to intensify our protests against the Labour Code,” she said.

Shiv Kumar also said that even though he was mercilessly beaten up in custody, he was committed to the cause of labourers. “I am the son of a farm labourer and I know what hardships we faced. I don’t want anybody to face the miseries that I overcame,” he said.