With seasonal migration delayed by over a month over the coronavirus lockdown and a lack of transportation, Jammu's Bakarwal community has been forced to tread a tough road. 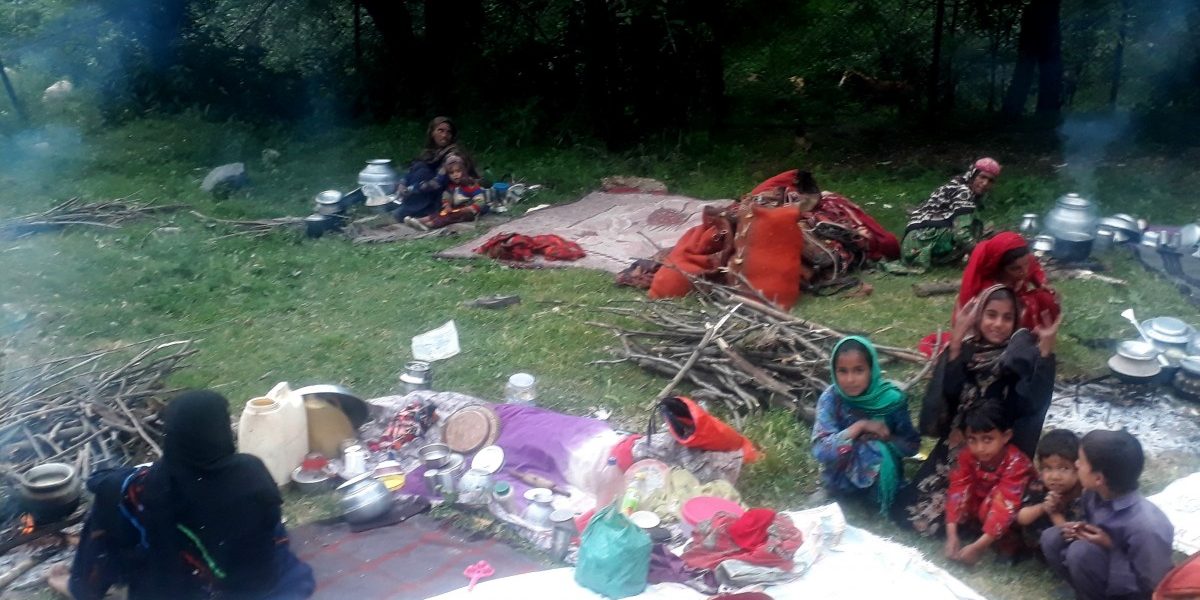 A family of cattle rearing nomads decided to camp outsde Srinagar, during their seasonal migration from Rajouri in Jammu to Sonamarg in Kashmir. Photo: The Wire

Budgam (J&K): The young nomad lit a fire to warm himself as he sat down to keep a watch on a flock of around 400 goats and sheep. It was well past midnight.

After days of an arduous journey through the Pir Panjal Range, Shahijahan and his family of Bakarwals – the pastoral nomads of Jammu and Kashmir – decided to take a break on the banks of a stream outside Charari Sharief town in central Kashmir.

“This disease came like a curse for us,” said 19-year old Shahijahan, referring to COVID-19. “We were forced to delay the migration. The animals were pushed to the brink of starvation due to shortage of fodder.”

The way to green pastures

Every year, like hundreds of other nomadic families of herders, Shahijahan’s family, which is from Chingus village in Jammu’s Rajouri district, sets off on a 42-day trek to the high altitude pastures of scenic Sonamarg in Kashmir to let the animals graze for the next six months.

The vast pastures in the upper reaches of Pahalgam and Gulmarg, which are tourist destinations, have been among the other areas favoured by the tribal Bakarwal community for decades. This seasonal migration is necessary to save the flock from the scorching heat in Jammu.

In Photos: Who Are the Bakarwals?

Then, as autumn drapes the Valley in October, the herders pack up and return to the native villages in Rajouri, Poonch and Kathua districts in Jammu.

This time, however, the COVID-19 lockdown has delayed their seasonal migration by more than a month, said Shahijahan. An elderly woman rides a horse with her grandson sleeping in her lap, in Budgam area, while on the way to Sonamarg from Rajouri. Photo: The Wire

Most families hire trucks to transport the animals and essential items, including tents, from the upper reaches of Rajouri and Poonch districts to Shopian, covering more than 120 km distance in a matter of a few hours. Some families even prefer transport up to summer capital Srinagar. It saves them 20 to 25 days, which means early access to the pastures.

The delay means the days ahead will be tough. “By now, our flock should have been at the pastures. But precious time is being lost in the journey and it means less availability of the food in the months to come,” explained Shahijahaan.

Shahijahaan said he dropped out from Class 10 in 2017 to join the family in rearing animals. “This is what we have been doing for ages. The earlier you learn, the better it is,” he said.

In his short stint as a herder, Shahijahaan said the coronavirus lockdown has been the “worst times” he’s seen.

Amid the lockdown, the families have not been permitted to hire vehicles, forcing them to cover more than 400 km on foot.

Shahijahan said trekking the snow-covered Mughal road was challenging. The 80-km road connects Bafliaz in Poonch with Shopain in Kashmir and is part of the route taken by the nomads for the seasonal migration.

“Due to the lockdown, the authorities hadn’t cleared the snow off the road and we had to walk non-stop for one day and one night,” said Shahijahan. “There was no chance of camping to take rest on the snow. It could have proven fatal.”

The historic road is usually opened in May after remaining closed for five months due to heavy snowfall. But this year, it was partially opened only last week.

Shahijahan’s family comprises seven members, including his two elder brothers. They take two-hour turns to stay awake at night to ensure wild animals do not attack the flock.

“The only good thing about this lockdown is that we can continue with our journey during the day time as well since there is less movement of traffic,” he said.

At a short distance from the family, 67-year-old Muhammad Rashid, head of another Bakarwal family, was puffing on his hookah.

The 17 members of his extended family were asleep on bedding prepared on a rough surface in an orchard. 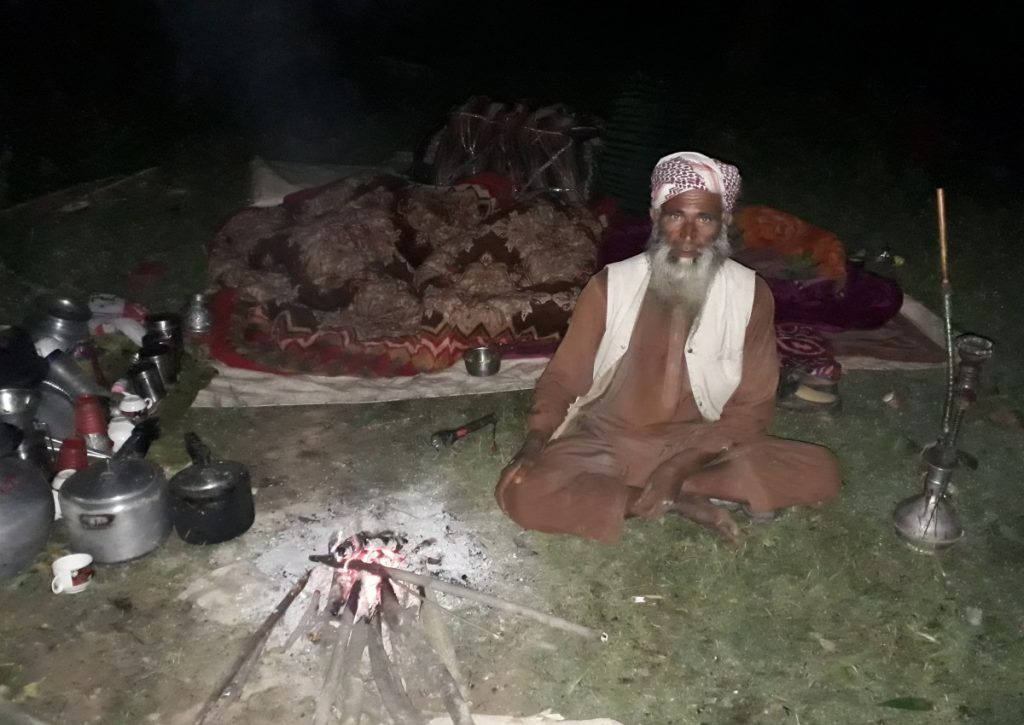 Muhammad Rashid keeps watch on his flock as his family members sleep behind him, during a two-day break on the way from Rajouri to Sonamarg. Photo: The Wire

A shortage of medicines for the animals owing to the lockdown also means their flock has become vulnerable to different diseases associated with migration.

The animals are vaccinated for some diseases days ahead of the beginning of the long journey. “The medicines save animals from developing a limp. But there was hardly any medicine made available by the authorities due to the lockdown,” said Rashid.

He, however, said that the health department had set up screening camps at different places in Rajouri and Shopian to screen the nomadic families for COVID-19.

Kakroo said the animal department procures medicines weeks ahead of the transhumance, the seasonal cycle of moving livestock from one grazing ground to another.

“Maybe there might have been some issues this time,” said Kakroo, who heads the department in Ganderbal district, the gateway to the pastures in Sonamarg, and Meenamrag in Ladakh.

The lockdown impacted the daily lives of the community of herders in different ways, said Khatija, Rashid’s wife. According to her, they have been traveling for the past 18 days and would take another 20 to 22 days to reach Meenamarg.

“Since markets were shut, it was very difficult to get food items. We tasted namkeen chai (salted tea) after eight days,” said Khatija. “The lockdown was so severe that we couldn’t get even medicines for our granddaughter who was running a high fever when a week before when we were passing through Shopian.”