Subhrant Shukla once made news for leaving a corporate job for agriculture and introducing progressive practices to farming. Now he is besieged by losses and is no longer wearing 'saffron-tinted glasses'. 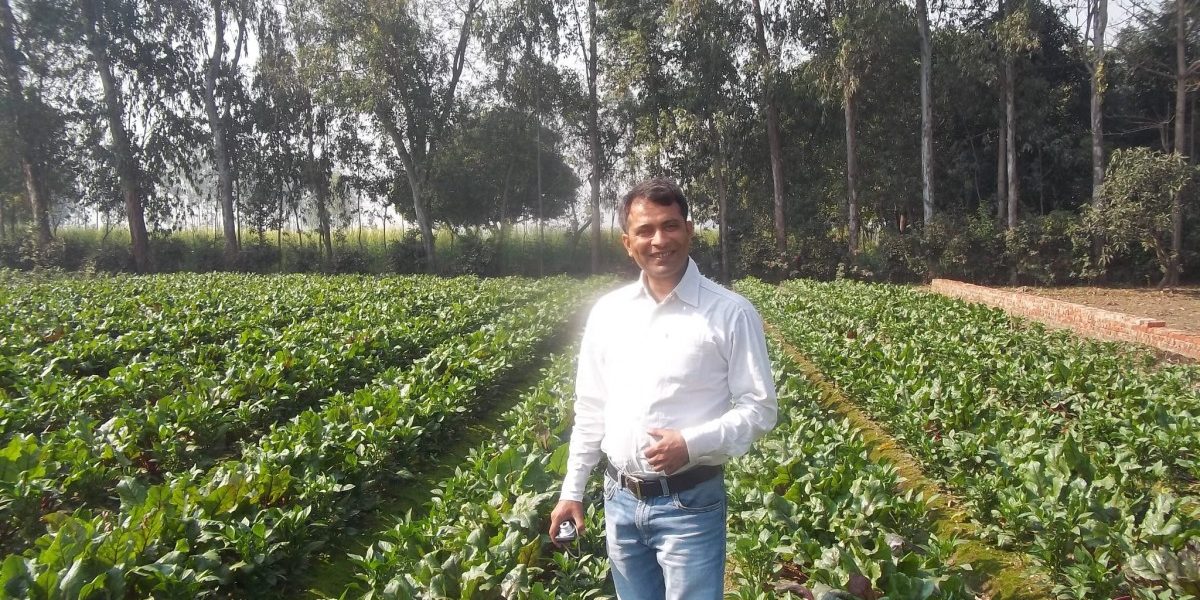 Subhrant Shukla's once prosperous fields were a testament to the success of inter-cropping. Photo: By arrangement

“I was a proud farmer but the government humiliated people like me. Lack of attention towards farmers’ concerns and a complete neglect towards agricultural policies are slowly taking away any incentive whatsoever from us to continue professional farming,” Subhrant tells The Wire.

For years, Subhrant’s story as a pharmaceutical executive-turned-farmer made news as he earned praise from far and wide for introducing innovative methods and scientific practices to sugarcane farming. However, his decision to quit active farming in 2019 did not draw similar attention.

“You are celebrated when you are rising but nobody wants to show your fall,” he says.

Subhrant left his job at the pharmaceutical giant Ranbaxy in 2010 to take up full-time farming in his village Pandit Purwa Surajkund in Lakhimpur Kheri. Love for his village and the temptation to become an entrepreneur drew him to farming. Over the next few years, he updated himself with the latest innovations in sugarcane cropping, participated in various farmers’ forums, and emerged as one of the most reputed progressive farmers in Uttar Pradesh.

“It was not easy,” Subhrant says, “to quit my cushy job in Ranbaxy. But I felt that if my brother and I utilised the land resources we owned in our village judiciously, we would be able to lead a better life”.

He enjoyed the initial few years and became one of the first farmers in Lakhimpur Kheri to introduce the trench method in cropping, which involves digging up deep drains in farms to facilitate judicious use of water and provide better stability to the standing crop.

He went on to initiate new forms of inter-cropping, using the farm space to also grow vegetables, maize, potato, and chickpeas, while also trying his luck with new sugarcane varieties. After getting to know about some novel sugarcane-growing practices in Maharashtra, he successfully emulated them in Lakhimpur Kheri. 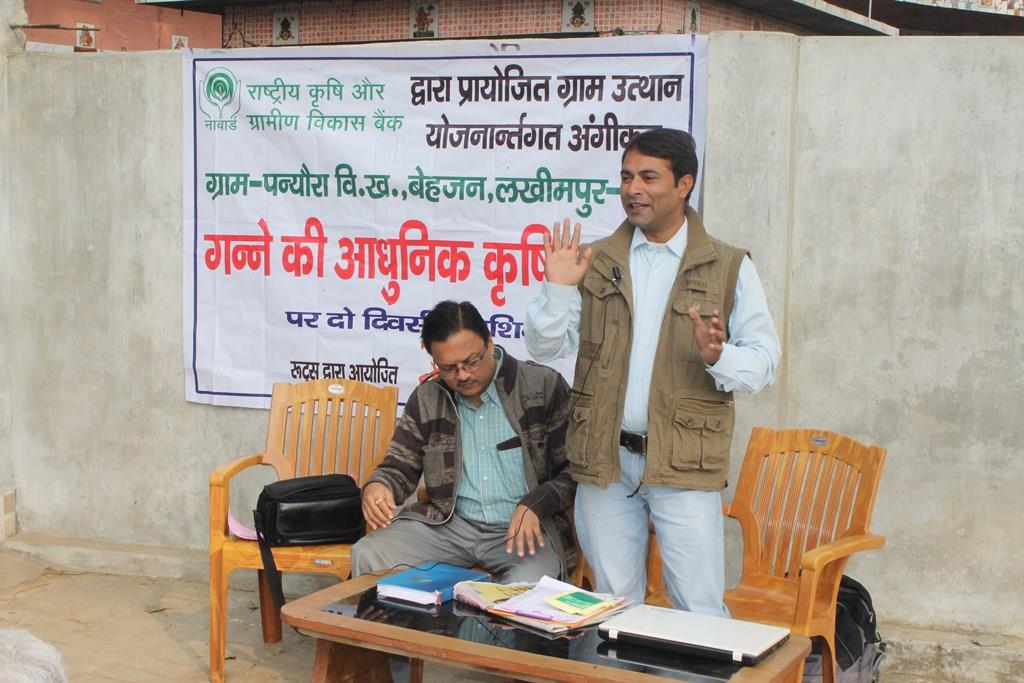 Subhrant Shukla speaks at a seminar on the new methods of agriculture he had adopted, in Lakhimpur Kheri. Photo: By arrangement

“The new methods gave us an immediate fillip. Our production was higher, crop quality was better, and eventually our methods came to be recognised across the state,” Subhrant says.

Meanwhile, his contribution to agriculture was acknowledged through multiple awards, including from the agriculture ministry of the then Akhilesh Yadav-led Samajwadi Party government and various state agencies involved in research and development.

It was around the same time that Subhrant, who until then had remained largely apolitical, grew to become a huge fan of the then Gujarat chief minister Narendra Modi. At the time, Modi was making efforts to emerge as the Bharatiya Janata Party’s candidate for the prime minister’s position in the 2014 parliamentary elections.

As part of these efforts, Modi was organising a number of events involving multiple stakeholders in Gujarat to showcase his national vision. One of them was the Vibrant Gujarat Global Agriculture Summit, 2013, to attend which he requested all state governments to select and send four progressive farmers of their state. Subhrant was one of the four selected by the Akhilesh Yadav government to represent Uttar Pradesh at the summit.

It was at the event that Subhrant, in his own words, became a “Modi bhakt” (‘Modi worshipper’). 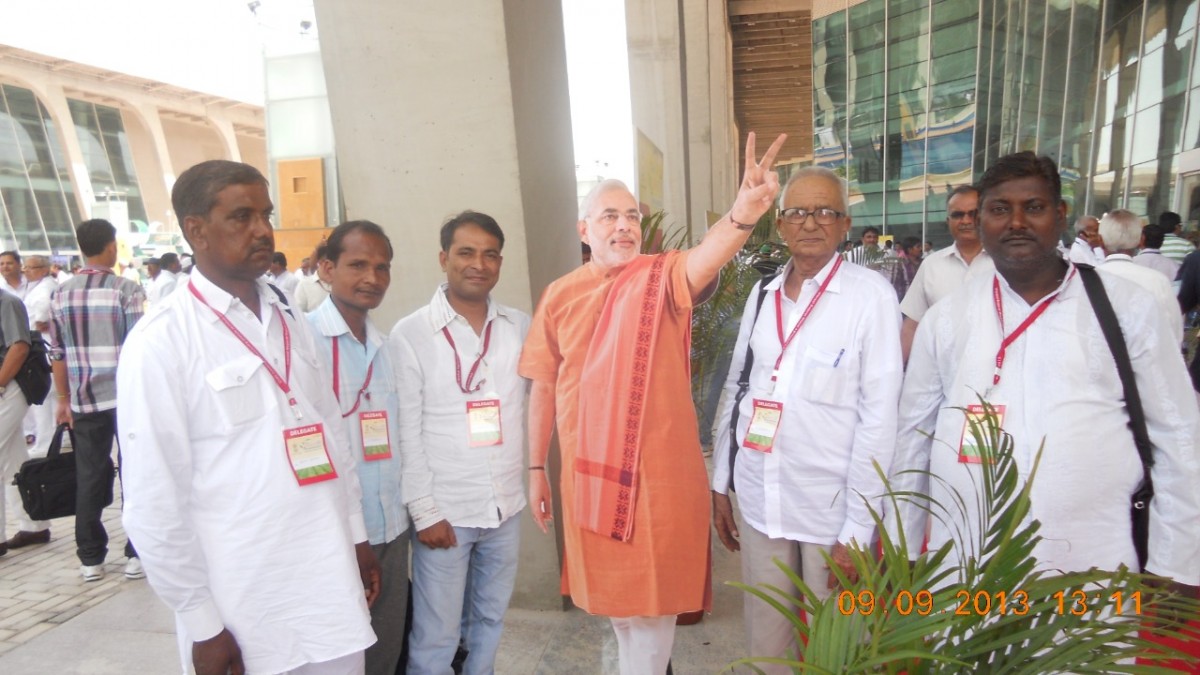 Subhrant, third from left, with a cutout of Modi in the 2013 Vibrant Gujarat summit. Photo: By arrangement

“Never before had any government acknowledged common farmers in such a way. We were taken to Ahmedabad on flights and given five-star accommodation. Everything, from travel arrangements to food, was top level. The event itself was a spectacle. One farmer from every state was selected for a Rs 50,000 prize money. We felt so special,” Subhrant says.

Modi’s inaugural speech at the event, Subhrant says, swept him off his feet.

“He told us of concepts like ‘one district, one crop’ and promised payments for sugarcane farmers within the stipulated 14 days, and how India could be the next dairy power if rural resources are utilised optimally,” Subhrant remembers.

More importantly, Subhrant says that he felt emotionally connected with Modi, and thought of him as the only leader who is really concerned about the farming community. “Modi ji said farmers of India come from Sardar Patel’s lineage, and asked all participants to mobilise others to collect iron and send it for the under-construction Patel statue.”

He remembers how at the event, many farmers were made a member of a farmers’ collective led by one BJP member, who used to talk about many “great things” that Modi had undertaken as part of agriculture reforms in Gujarat. 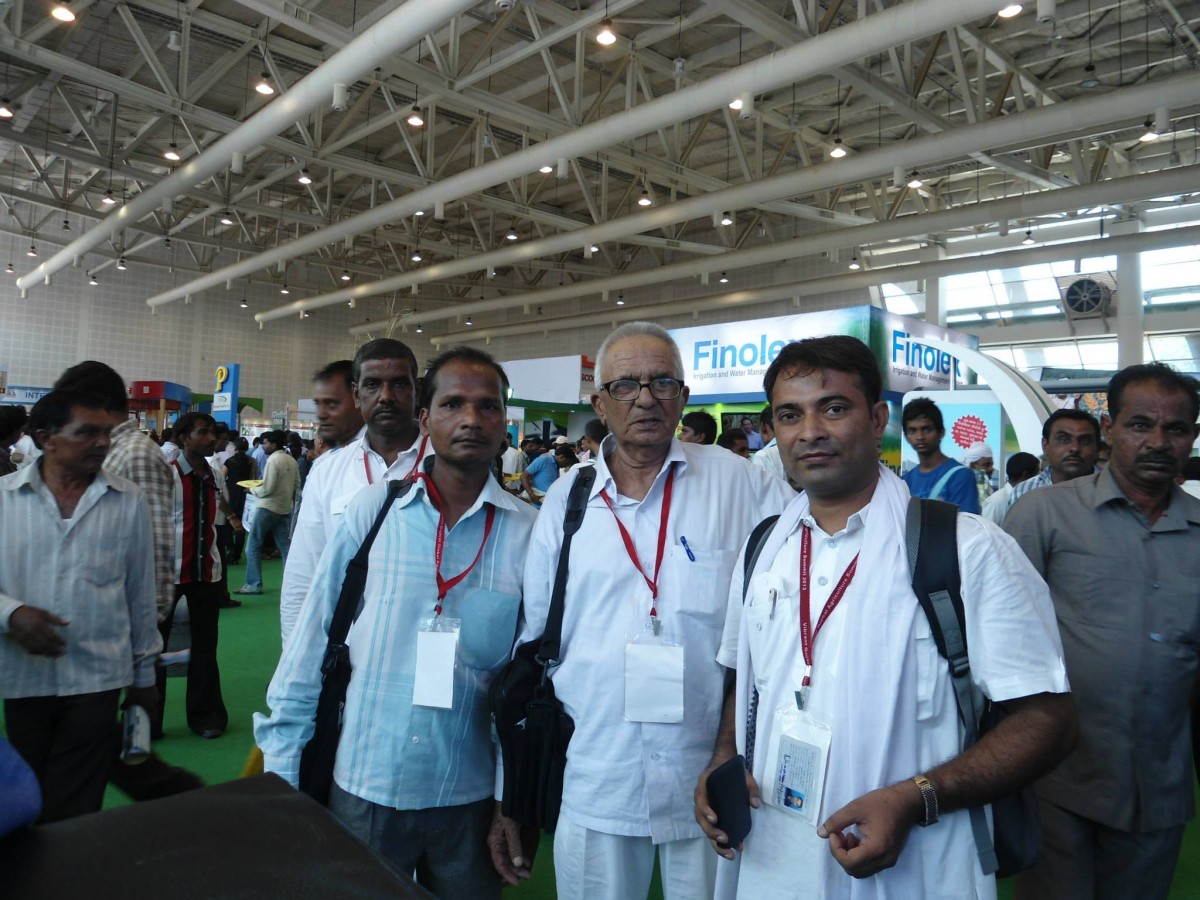 Subhrant Shukla and others at the Vibrant Gujarat summit. Photo: By arrangement

“All of us became big fans of Modi and began rooting for Modi to become the next prime minister. Hum logon ko bhagwa chasma lag chuka tha (‘we had already put on saffron-tinted glasses’),” he says.

After coming back, Subhrant began campaigning for Modi, without any formal association with the BJP. “I was so enamoured by Modi’s personality that I kept telling people about Modi and what we heard of him in the farmers’ group. I rested only after Modi ji became the PM,” the 42-year-old tells The Wire.

Over the last seven years with Modi at the helm, all his dreams came crashing down. “He fulfilled not one of his promises. It took me almost five years to understand that everything he says is a public relations exercise, a lie,” Subhrant says.

“Look at my own condition. My family cultivates sugarcane in around 30-35 acres of land. Our sugarcane payments have been pending since last January. Moreover, our input costs have risen drastically because of rising prices of fuel, fertilisers, and electricity. The delay in payments has increased our debt. Farming has become a liability,” he asserts.

Subhrant goes on to count the number of unfulfilled promises that BJP made in 2014. “’One district, one crop’ is yet to be implemented. After the cow slaughter ban in the state, cattle trade took a beating, which harmed farmers in more ways than one. Farmers are compelled to abandon their old cows and buffaloes. Stray cattle have become the biggest fear of farmers.”

“All the government schemes like crop insurance and low-interest agriculture loans have profited only the big companies. Farmers are only losing their earnings in such schemes without getting any tangible benefits,” he adds.

By late 2019, after cutting Modi a great deal of slack and expecting he will soon course-correct, Subhrant decided to quit full-time farming. “I had left my job so that I could strike a good balance between my work and life. But over the last few years, my health deteriorated because of stress. I could not even rest in my own home – I had to sleep in the farm to guard our standing crop from feral cattle,” Subhrant says. 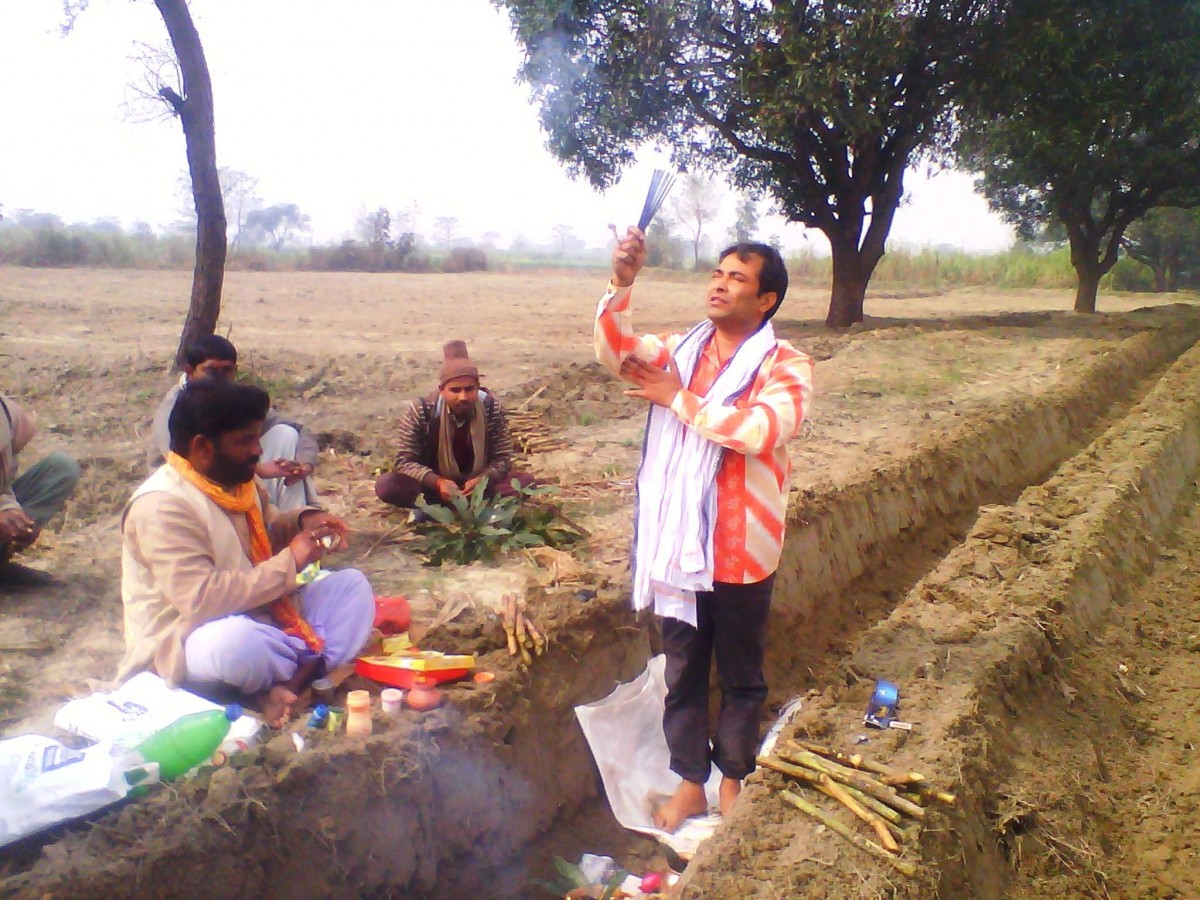 The delay in sugarcane payments have made farming untenable for many farmers in the region, Subhrant says.

Uttar Pradesh owed around Rs 7,000 crores to sugarcane farmers until recently. However, in the last few months, a large part of the dues were disbursed. Yet, the outstanding amount to farmers still remains at nearly Rs 4,000 crores.

“Modi ji turned out to be a complete contrast of what I had expected him to be. Let alone the introduction of farmer-friendly reforms, Modi ji could not fulfil the basic minimum needs of farmers,” he says, emphasising that farmers’ incomes have substantially reduced over the last few years, and not “doubled” as BJP claims.

“During Mayawati’s tenure, our payments used to come in a month or two. During Akhilesh, it would be months but payments still arrived in less than a year. During Yogi ji’s rule (Adityanath, the current Uttar Pradesh chief minister), payments have not come for more than a year. We are in fact unsure if our dues would come before one-and-a-half years.”

Subhrant has also had to suffer heavy losses because of near-stagnant prices. “My methods became increasingly unsustainable. So I am thinking of taking a private job again. At least then, there would be some kind of permanent income source for the family. But I will continue helping my brother in farming,” he says. 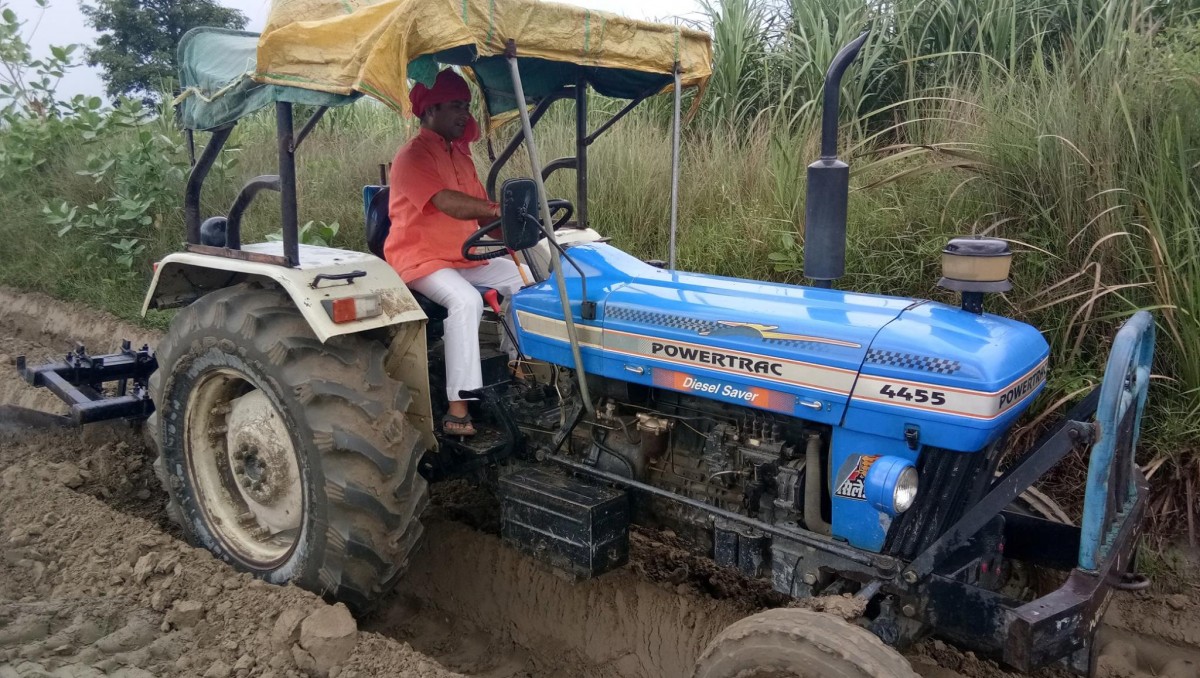 Subhrant Shukla on his tractor in better times. Photo: By arrangement

As assembly elections in the state draw closer, Subhrant says any government would be better than BJP.  “Modi ji is a good orator, and so is Yogi ji. That’s their only quality. We need people who can govern well, listen to the concerns of people, and work on them.”

As Subhrant leaves, he turns back and says, “You know some farmers at the Vibrant Gujarat summit told me about the crisis that onion farmers of the state were facing at the time. They blamed Modi’s anti-farmer policies for their poor conditions. They also told me that none of what he was saying was completely true. But by then I had already put on the bhagwa chasma.”