R.K. Thakuria, principal scientist of the agronomy department at Assam Agricultural University, discusses the oft overlooked effects of the annual floods on the state's agriculture. 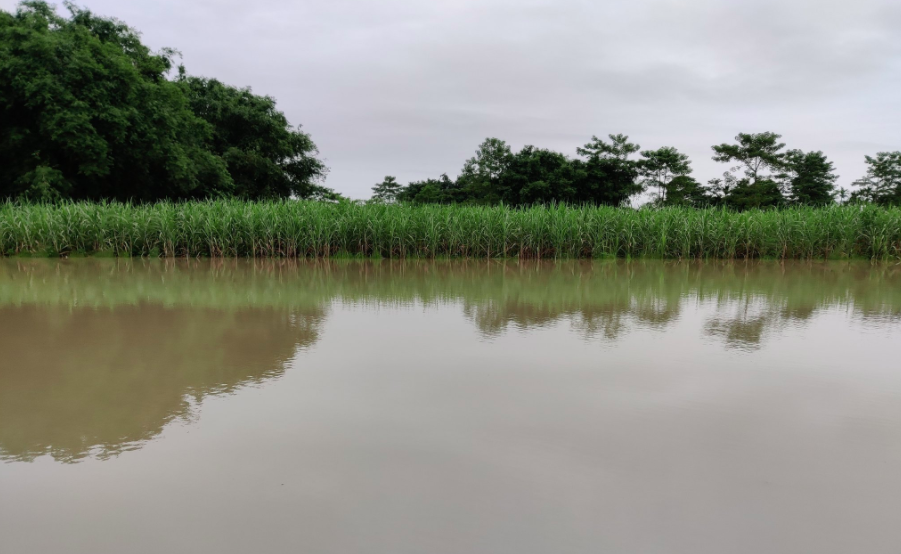 The arrival of the monsoon rains often signifies relief for a predominantly agricultural country where many farmers still depend on rain for the irrigation of their fields. But for Assam and its denizens, monsoon clouds portend death and destruction.

In May and June this year, Assam witnessed unprecedented flooding that indiscriminately washed away lives and property. According to the Indian Meteorological Department (IMD), Assam recorded excess rainfall of 109% in June. More than 5,000 villages were affected by the Brahmaputra river breaching its embankments due to the incessant rainfall.

The Assam State Disaster Management Authority (ASDMA) reported that 156 lives were June, in addition to 30 lost to floods in May. Over 2.5 lakh people were evacuated and sheltered in 800 relief camps across the state.

The widespread loss of life and property often overshadows other aspects of the wanton destruction wrought every year by the onset of the floods. The floodwaters arrive, inundating cultivated fields and washing away sown crops.

This year, the numbers were alarming – over 11 lakh hectares of cultivated land was affected in June, according to ASDMA reports. On June 20, around 1.1 lakh hectares were affected within a span of 24 hours.

The Wire spoke to R.K. Thakuria, principal scientist of the agronomy department at Assam Agricultural University (AAU), about the impact of the incessant flooding on agriculture. Edited excerpts follow.

Although flooding has been a recurrent problem in Assam for several decades now, what we have witnessed this year so far is unprecedented. Beyond a significant loss in lives and property, what else has the flooding adversely affected in terms of agriculture in the state?

Yes, as you have pointed out, this is a regular and recurrent phenomenon. As far as this season’s flooding is concerned, the impact on agriculture has been more prominent. In the last two years, flood damage was relatively lesser. Flooding used to be more severe in ‘upper’ Assam, in regions such as Dhemaji, but this year, the problem has plagued districts across the state, including ‘lower’ Assam.

In agriculture, the major damage has been borne by the summer rice crops, also known as ‘Boro rice’. It was the harvesting season of this variety of rice and the inundated crop fields have destroyed a significant portion of the sown plants.

Boro rice is sown along the banks of the Brahmaputra river and has a high yield. The crop is grown using extensive irrigation techniques and has high productivity. With the floods, most of the crop is damaged.

Maize cultivation has also been significantly affected due to the floods. It is harvesting season for the crop and as such, the flood descended in a very inauspicious moment, washing away the sown saplings. Similarly, summer vegetable cultivation such as turai (ridge gourd), bhindi (lady fingers), karela (bitter gourd) and the like has also been severely affected, with large sown areas inundated.

This is also the time when the main rice variety, ‘kharif rice’, is planted in nurseries. The nursery seed beds where sali (winter) rice was planted have been inundated and subsequently destroyed. This will pose a critical problem for farmers in the winter agriculture season.

The extent of this season’s flooding is staggering. Regions where flooding was hitherto a rare occurrence have also witnessed flooding. Hilly regions, such as Barak Valley, have also been affected this season. 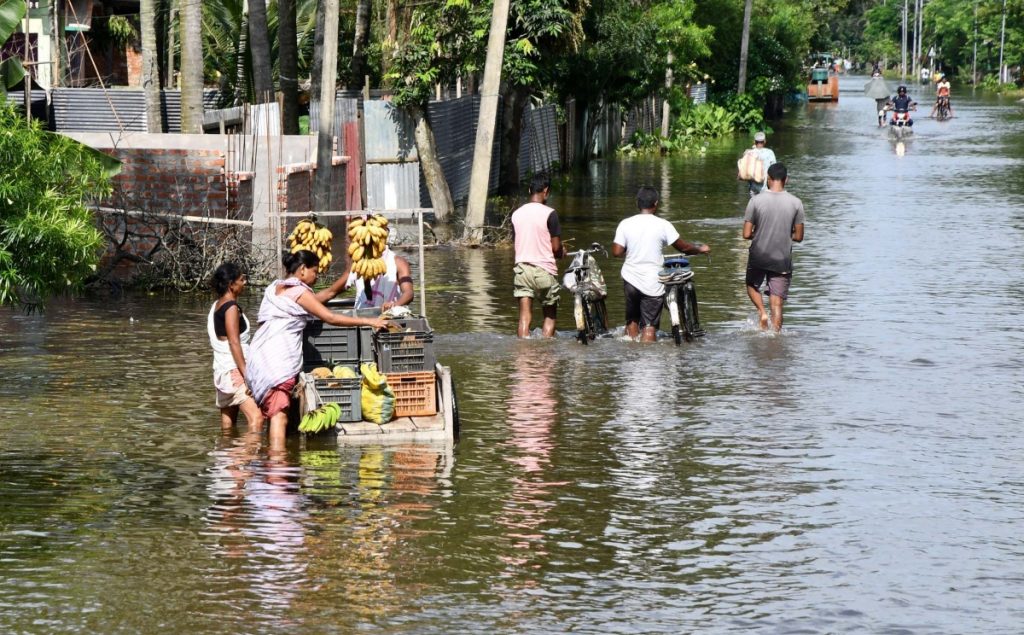 A vendor wades through a flooded street, in Kamrup district of Assam, June 24, 2022. Photo: PTI

Indeed the extent of flooding this year has been abnormal; a freakish display of nature’s fury. Focusing on this particular point, is what we witnessed this year simply an anomaly, or is it indicative of what to expect in the future? Is there any explanation for the increase in the severity of the flooding that we have seen this year?

Bank erosion and run-off erosion have further contributed to the rising riverbeds. The water carrying capacity of most rivers has declined and flooding has become more severe.

Deforestation and human encroachment and intervention in hilly areas have resulted in a substantial increase in surface run-off and have also converted the plains into one large catchment area. A combination of these factors has elevated the severity of the flooding situation and day by day, the problem increases.

It is difficult to predict what next year will bring. But, nevertheless, based on what we can see, the flooding problem will gradually worsen in the coming years.

That is a worrying prediction. And this really raises the question: What can be done? What can the government do to combat this problem and also provide relief to the afflicted individuals? And what has the government done?

Well, the government has introduced community nursery beds in different areas in the state. The seeds sown in these will be provided as relief in the near future. The Pradhan Mantri Fasal Bima Yojana also assists affected farmers. However, simply claiming insurance and receiving money for the damaged crops is not an effective cure.

Beyond that, the government has also organised relief camps across the state. Over 500 such camps have been established in the state. Also, mention must be made of the many relief organisations that have been working to help the people.

It is also to be noted that even animals, both domesticated and wild, have been affected. Shelters have been built to house and nurse them.

But is this enough? The measures introduced by the government seem reactionary and at best, provide some relief without any preventive aspect. The floods have been a recurrent problem; isn’t it time for more drastic measures? What more can the government do?

Scientific management of the flooding problem is the need of the hour. This is, as you pointed out, a recurrent problem and under these uncertain conditions, farmers are hindered from economic progress. We will soon be witnessing a downturn in their economic fortunes.

Farmers in the state will gradually become poor if this problem persists. Most farmers are incurring significant losses year after year, and farming is becoming economically unfeasible. For the government to expect farmers to pursue farming without adequate safeguards against natural calamities, it is a losing proposition.

The floodwaters have receded, yet the horror persists. Families and individuals struggle to come to terms with the death and destruction that has been unleashed in the state. As the state strives to engage in rebuilding again, the denizens wait with bated breath, for the monsoon isn’t over.

As I look at the pictures and read the numbers, a question lingers: How much worse will it be next year?