The ban on onion exports has proven that farmers, mostly small and marginal, will continue to hold the burden of reining food inflation. 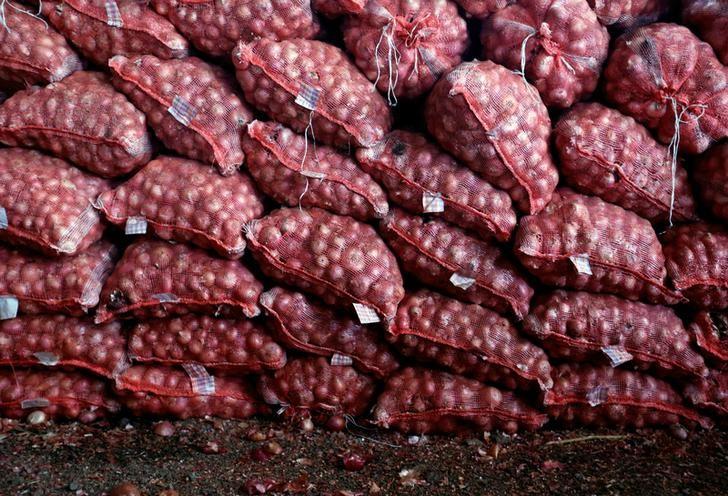 Packed sacks of onions kept for delivery are seen at an empty wholesale fruit and vegetable market in Pimpalgaon, June 2, 2017. Photo: Reuters/Danish Siddiqui/Files

On June 5, 2020, just after the COVID-19-induced all-India lockdown was being eased, the government promulgated The Essential Commodities (Amendment Ordinance, 2020).

This move was lauded by India Inc as the move apparently signalled that the Indian government had finally decided to ease the draconian provisions of the EC Act.

It meant that the Central government would be able to regulate the supply of certain food items only under extraordinary circumstances like war, famine, extraordinary price rise, or a grave natural calamity. Under normal conditions, the Centre and state governments would have to bind themselves to a policy of non-interference.

The Essential Commodities Amendment Bill was passed by Lok Sabha on September 15, 2020. During the discussion in the Lok Sabha, members belonging to several parties came out in support of the amendment Bill and said that agriculture markets were shackled. They demanded that export restrictions should also be removed.

In his reply, the minister of state for consumer affairs said that the amendment will benefit the farmers by bringing more competition and it will also attract investment in post-harvest operations.

It is ironic, therefore, that only a day before the voting in Lok Sabha, the government banned the export of onions. What was the provocation for a sudden ban, which seemed to go against the very argument of EC Ordinance?

Also read: Interview: ‘Intent Behind Farmer Bills Is to Avoid Accountability for Ensuring a Fair Price to Producers’

It is important to note here that the Ordinance allows the Centre to intervene only if there was a 100% increase in retail price for perishables and a 50% increase in the price of non-perishables over a period of preceding 12 months or average of last five years, whichever is lower. The Ordinance further provides that even if such conditions are reached and stock limits are imposed, they shall not apply to a processor or value chain participant of any agricultural produce. However, the processor was not to be allowed to keep stock higher than the installed capacity of the processing unit.

Similarly, the exporters were to remain exempted from stock limits to the extent of the demand for export.

Coming back to the onion ban, let’s dive into the issue by taking the example of a large producing district (Nashik) and a large consumption centre (Delhi).

Now let us look at wholesale prices at Nashik, the largest onion producing district in the country. These prices broadly reflect the prices received by onion farmers.

However, the Ordinance only allows the government to step in and regulate if the retail price of horticultural produce increased by 50% in the previous 12 months or in preceding five years, whichever is lower.

It is clear, therefore, that the trend of retail price of onion did not justify action in accordance with The Essential Commodities (Amendment) Ordinance, 2020.

This is why the government banned the export of onion by taking recourse to The Foreign Trade (Development and Regulation) Act, 1992.

Maharashtra produces about one-third of country’s onions. It produced 117 lakh tonne of onion in 2019-20, highest ever for the state. Out of this, about 100 lakh tonne is produces in rabi crop and it is stored to meet the demand from April to October. The government has been providing grants to farmers for the creation of onion storage capacity and about 15 lakh tonnes capacity has been created under subsidy schemes. The traders and farmers have another 8 lakh tonnes of storage. It is clear that the capacity of 22 lakh tonnes is grossly inadequate to safely store rabi onion for 4-6 months, that too during monsoon.

This year also the late kharif crops were damaged by heavy rains in August in AP, Karnataka, Gujarat, MP and Maharashtra. The stored onions were also damaged. This was the reason for the increase in prices in the first fortnight of September. This was also the time when the farmers could have recouped their losses from storage losses and low prices during the lockdown.

Maharashtra’s contribution to India’s onion exports is about 80% and therefore the onion farmers have been most affected by the sudden ban.

The logic of the three Ordinances was to open up India’s agriculture sector to more competition so that the farmers would have more remunerative options to sell their produce. So far, more heat has been generated due to the Farmers’ Produce Trade and Commerce (Promotion and Facilitation Ordinance), 2020. The farmers fear that differences in taxation within and outside the APMCs will destroy the mandi ecosystem built over the period of green revolution.

The Essential Commodities (Amendment Ordinance, 2020) was expected to provide consistency and predictability to India’s agricultural policy regime. Therefore, even before the bill to make it a law has been approved by both houses of parliament, this ban on onion exports has proven that the farmers, mostly small and marginal will continue to hold the burden of reining food inflation.

An OECD-ICRIER study led by Dr Ashok Gulati had documented that export bans, minimum export prices, stock limits, movement restrictions etc were a form of “implicit taxation” on farmers. It is estimated that for 2000-01 to 2016-17 period, such ‘taxation’ amounted to Rs 2.65 lakh crore per annum (at 2017-18 prices). Thus, for the seventeen year period, the farmers were ‘taxed’ to the extent to Rs 45 lakh crore. The study had found that no other country had taxed its farmers to this extent.

It is claimed that the three agriculture bills before parliament will unshackle the farmers. However, steps like the onion export ban go against the spirit behind the Ordinances.

One hopes it is only an aberration.