India is being targeted using a deeply flawed methodology that the WTO has prescribed for estimating subsidies arising from market price support. 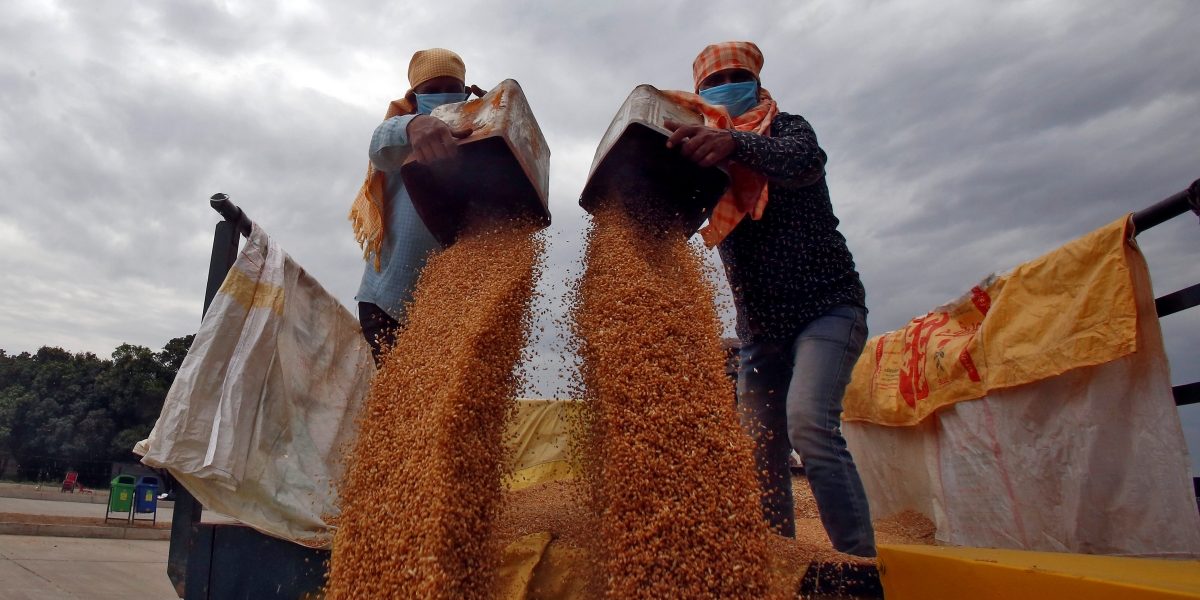 Labourers wearing masks shift wheat crop from a trolley to remove dust from the crop at a wholesale grain market during an extended nationwide lockdown to slow the spreading of COVID-19 in Chandigarh, India, April 17, 2020. Photo: Reuters/Ajay Verma

On July 1, a dozen US Congressmen wrote a letter to President Joe Biden, asking him to hold India to account for its decades-long violation of commitments made to the World Trade Organisation (WTO).

Their contention was that India had been providing minimum support prices to its farmers in violation of WTO rules. By promoting its own interests, India has apparently been acting against the interests of US farmers and ranchers. The decision to send the letter was initiated and coordinated by Rick Crawford and Tracey Crawford – two Congressmen who have received campaign funding from US agribusinesses.

This targeting of Indian agriculture is, therefore, yet another instance of American agribusiness squaring off against India’s farmers.

Specifically, the Congressmen argued that the subsidies granted to India’s rice and wheat farmers through the minimum support price system are in violation of WTO rules. These rules, detailed in the Agreement on Agriculture (AoA), allow each crop to be subsidised by no more than 10% of its value of production. The Congressmen claim that for years subsidies have consistently been “more than half of the value of production for rice and wheat” and India has thus “reshaped global agricultural production and trade channels by driving down global prices and depressing production of staple commodities like rice and wheat.”

The Congressmen have urged the Biden administration to initiate a dispute against India for violating WTO rules and undermining “fair trade practices.”

This is not the first time that India’s agricultural subsidies have come under global scrutiny. In 2018, the US questioned the legality of India’s minimum support price (which the AoA terms as ‘market price support’) for rice, wheat, and cotton. Australia followed suit by asking similar questions regarding the Fair and Remunerative Price and the State Advised Price (SAP) granted to sugarcane farmers. In order to understand the claims of the Congressmen (and also of Australia), it is important to first understand the economic rationale of the rules on agricultural subsidies laid down in the AoA.

According to the AoA, subsidisation using market price support (MPS) is measured by comparing the government guaranteed prices (or minimum support price as in India) for individual crops in a given year with their average international prices prevailing during 1986-88. The implicit assumption is that the 1986-88 time period provides a set of unbiased and stable commodity prices that can be accepted as competitive prices. For calculating the total value of subsidies arising from MPS in a given year, the difference between that year’s MPS for each crop and its average international prices during 1986-88 are multiplied by the quantity procured by the government. The figure thus obtained for each crop must be less than 10% of its total value of production; anything above this threshold is a violation of the WTO rules, as the US Congressmen have pointed out.

In its 2018 submission, the US argued that India’s MPS to rice during 2010/11 to 2013/14 was consistently above 70% of the value of agricultural production, as against the allowed limit of 10%, while the corresponding figures for wheat were above 60% (Table 1).

In response to the figures provided by the US, the Government of India informed the WTO that its MPS for rice and wheat were well below the 10% threshold. MSP for rice was above 7% until 2013/14 and had declined to nearly 5.5% in 2013/14, while MSP for wheat was negative for most years. The negative figure was because India’s wheat MPS was below the average international prices during 1986-88.

Table 2: India’s Market Price Support to Rice and Wheat in US Dollars

Sources for Tables 1 & 2: WTO, 2018. Certain Measures of India Providing Market Price Support to Rice and Wheat: Communication from the United States of America Pursuant to Article 18.7 of the Agreement on Agriculture. G/AG/W/174.

It is obvious that the discrepancies between the US’s claims regarding India’s MPS and the Government of India’s figures are because the two different currencies were used to estimate the extent of subsidisation. By presenting the subsidies figures in terms of dollars, the Government of India was able to factor in the effects of depreciation of the Indian rupee.

The important point is that India’s total subsidies for rice and wheat were both below the 10% threshold. However, the US does not approve of India’s reporting the subsidy figures in dollars. This is strange as the US cannot insist that India reports its subsidy figures in  rupees as the AoA does not stipulate that MPS must be reported only in the WTO members’ domestic currency. 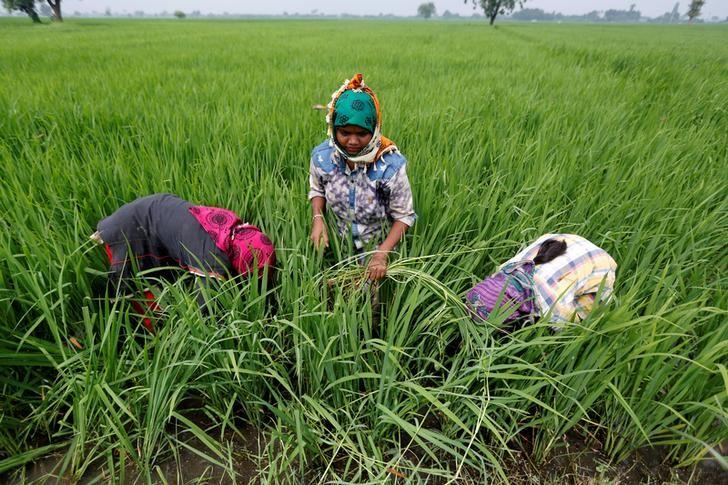 From India’s point of view, the advantages of reporting its domestic support notifications in US dollars instead of Indian rupees can clearly be understood from Tables 1 and 2. If India had notified its MPS in rupees as the US wants it to do, the 10% threshold would have long been breached. Consequently, Government of India would have been prevented from increasing the minimum support prices that it does every year.

By now, it should be clear that India is being targeted using a deeply flawed methodology that the WTO has prescribed for estimating subsidies arising from market price support. Although the flaws are several, only a few major ones are discussed below.

The first, and most significant, flaw is that the quantum of subsidies are estimated by comparing the support prices of crops announced every year with their average international prices during 1986-88, based on the assumption that the latter set of prices were stable and unbiased, and could, therefore, be assumed to be “competitive.”

The assumption regarding the 1986-88 prices are flawed as international prices for major commodities were generally volatile during 1986-88 and this was due to two factors. First, the US and members of the European community (EC) have disproportionately large shares in the exports of several major commodities, including wheat maize, and cotton, during the late-1980s. In other words, the international prices for these commodities were influenced by these dominant players and were hence not competitive. Secondly, the US and the EC members were providing sizeable subsidies to put their producers in an advantageous position in the global markets, implying that the international prices were manipulated.

The second, and more serious, flaw in the methodology is that current support prices for the commodities are compared with a four-decade-old set of international prices. Developing countries, like India, are put at a severe disadvantage as a result as most of them have experienced “excessive rates of inflation” (suggested as 4% or above annually) since 1986-88, rendering its subsidies’ calculations quite meaningless. India, for instance, has witnessed CPI inflation that is close to 970% between 1986-88 and 2021.

It may be pointed out that by notifying its MPS in dollars, India was able to get partial compensation for its “excessive inflation.” For instance, between 1986-1988 and 2010-14, the period covered in the US submission of 2018, the rupee had depreciated by over 300%, while India’s CPI inflation was well over 600%.

In other words, India’s MPS notifications in US dollars were under-compensating the effects of “excessive inflation.” This would make its impact felt on future increases in MPS, especially for rice. Earlier this year, India reported to the WTO that in 2020-21, MPS for rice had already exceeded 15% of its value of production and had exceeded the 10% limit stipulated by the AoA.

Unfortunately, the AoA cannot allow compensation for “excessive inflation” as it includes a provision (Article 18.4) that only requires WTO members to give “due consideration to the influence of excessive rates of inflation on the ability of any Member to abide by its domestic support commitments.” This provision does indicate that the drafters of the AoA were aware of the problems that inflation could cause while implementing the agreement, but they opted against including specific provisions that could open the door for renegotiating the subsidies rules of AoA.

It may not be very difficult to guess as to why this was the case. The AoA was essentially a charter for agricultural trade liberalisation, which paid scant attention to long-term concerns of developing countries, namely, food security and rural livelihoods. The AoA acquired this character since it resulted from a bilateral deal between the US and the EU, namely, the “Blair House accords” of 1992. This was ironically the reality after 125 countries “negotiated” the AoA through the Uruguay Round of multilateral trade negotiations.

Not surprisingly, developing countries had begun voicing their disappointment even before the agreement was implemented. In the Marrakesh Ministerial Conference convened to formally endorse the formation of the WTO in 1994, the then Indian commerce minister, Pranab Mukherjee, argued that the “agreement on agriculture will need to be refined in future so that greater liberalisation can be achieved and trade distorting practices disciplined without affecting in any way the developmental programmes and social objectives of developing countries.” He underlined that the Government of India was “firmly committed to protecting the interests of our farmers who constitute the country’s lifeline and to the objective of ensuring food security for our people.”

In the face of a concerned onslaught from the US agribusiness, the present government faces a major challenge to fulfil the commitment that India’s former president had made three decades back. For the sake of our farming communities, the government must stand up to the challenge.