How Feasible Is MSP as a Legal Right? Farmers Discuss at Kisan Sansad

Protesting farmers believe that the MSP will as a legal right will solve a lot of farmers' issues, including debt. 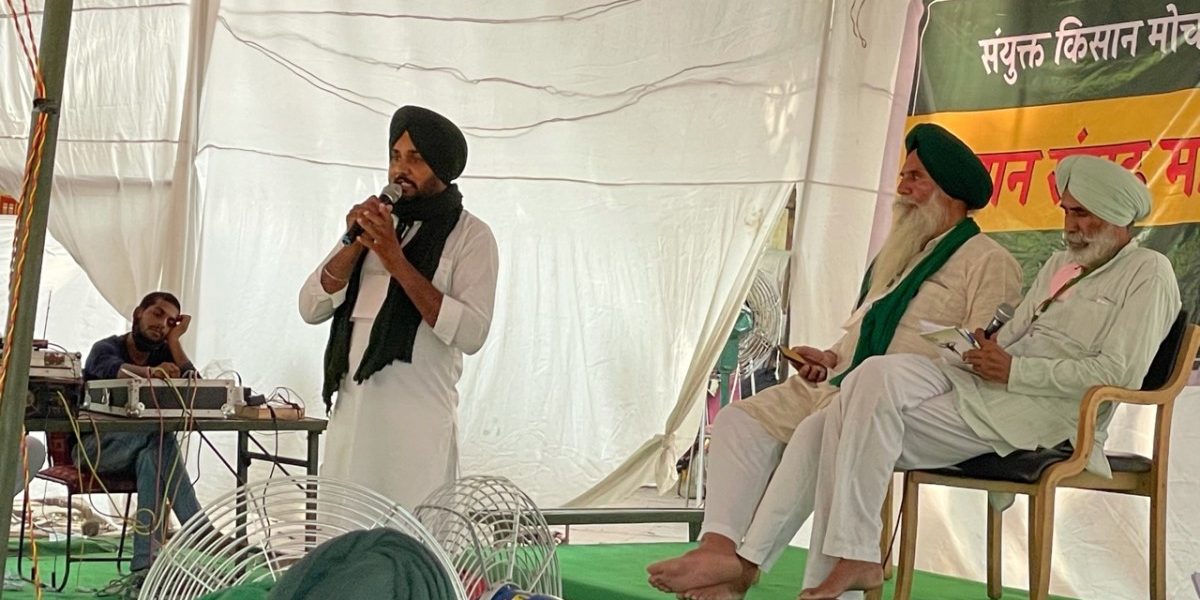 Farmers and experts at the Kisan Sansad. Photo: Author provided

There were 200 new farmers’ representatives and six hours to answer this question. But they had a little help too. The Sansad had invited two economists and agricultural policy experts – Devinder Sharma and Dr Ranjit Singh Ghuman – to talk about the issue.

“Globally, farmers are in a crisis and the reason is crashing prices and market manipulation by corporate giants. Hence the demand for MSP as legal right and assured incomes births a new way not just for farmers of India, but also the world,” Sharma said.

Sharma is a staunch advocate of the MSP being a legal right and had travelled from Chandigarh just to address the Kisan Sansad in Delhi. “Instead of adopting a failed US agri-model in India, the Indian farmers’ revolution should export ‘MSP or parity price as legal right’ to the US policymakers. Once this happens, no corporation can ever exploit the farmers, whether in India or the US,” he said.

Protesting farmers cheered heartily at Sharma’s suggestion. Surinder Singh from Haryana challenged the Modi government after the noise died down. “Give us the MSP for just two years and every farmer in the country will be debt-free. The government has purposefully caged us. With MSP, we shall be free.” Farmers and experts at the Kisan Sansad. Photo: Author provided

But all over the country, farmers aren’t as lucky as those in Haryana or Punjab. B.L. Verma, a surgeon from Pratapgarh, Uttar Pradesh, told the Sansad a grim tale. “In our area, farmers hadn’t even heard of the MSP. They are mostly small farmers who have maybe 10 quintals to sell at most. Nevertheless, the procurement centres are shut for them. After we protested, I was in jail for 19 days, and after that only 1% of the total thin rice produced in our area was procured. On paper, however, the government claims that record-breaking procurement is happening.”

“Thanks to the farmers’ revolution, farmers in UP now know about the MSP,” he added.

Rajvir Singh from Madhya Pradesh narrated another tale, “When we have the crops, the prices are always low, but sudden once our crop moves to the market, the price quadruples.” He was alluding to skyrocketing soyabean prices. “The situation is so bad, that farmers didn’t even have soyabean for seed. The market has taken everything and we are not in a position to buy it back. MSP is as legal right is the only solution.”

The farmers also feared that with APMC mandis gone, the MSP will be hard to implement, and with it the public distribution system (PDS) will be redundant. Ram Sahu, another farmer from MP, said, “The MSP and PDS will die together with the three farm laws, Indian agriculture can only be saved if MSP is made a legal right.”

By now it was lunch time, and a treat on its way. The representatives enjoyed dal and vegetables in the langar. With a full stomach, the deliberations continued.

Also read: At Kisan Sansad, Farmers Explain Why MSP Is So Crucial to Their Demands

Now only the ‘how’ question remained and Dr Ranjit Singh Ghuman, an economics professor who has devoted his life to agrarian issues, tackled it. “The first step is give legal and constitutional status for the Commission for Agricultural Costs and Prices (CACP). It would be at par with the Election Commission or Finance Commission.  Then we need to have at least five farmer representatives as members and not only neoclassical economists,” he said. He talked at length that CACP should be an independent body with powers. But that was not all.

“MSP should be made a legal right in the parliament, which no future government can also overturn. Government through E-nam, etc should give buying assurances and expand its role for the interest of the farmers. After all, we are a welfare state,” he added. Ghuman also stressed the need for strong anti-food cartel laws, so the US style of oligopolies don’t take root in India. “India is still our farmers, if we betray them, we are betraying our country.”

The MSP as a legal right is a litmus test for the Modi government. Will they use their majority government to work for 70% of Indians or bend over for agri-dollars? Farmers already know which way the winds is blowing.

Indra Shekhar Singh is an independent policy analyst and writer and also the former director of the National Seed Association of India.