The way farmers stood united with the potential to cause electoral damage is reminiscent of the grit that marked the kisan movements of the 1980s and 1990s.

New Delhi: On November 26, it will be one year since farmers began protesting on the borders of Delhi against three controversial farm laws. A week prior, Prime Minister Narendra Modi apologised to the nation and announced that his government will repeal the laws.

This is perhaps the biggest issue Modi has taken a back step on in his political life. The farm protests had turned into an issue of prestige for the Union government. That was best embodied by the way celebrities, including Sachin Tendulkar, were brought in to defend the government’s handling of the protests when questions were raised by global celebrities like Rihanna and Greta Thunberg.

It seemed as if the government was not willing to concede an inch on the farm laws and preferred to play the waiting game, refusing even to engage with the farmers after the initial rounds of talks in which the government rejected any demand for a repeal of the contested legislations.

But it all changed on Friday morning to the surprise of most as Modi caved. Political considerations with the upcoming state elections in Punjab and in particular Uttar Pradesh are key to the calculations, according to political watchers.

When the protests began last year, most of the protesting farmers came from the states of Punjab and Haryana where the procurement of crops at minimum support prices (MSP) is a source of relative income stability for most farmers.

While farmers from western Uttar Pradesh had a presence at the protest sites, they were more peripheral. That changed on January 28, when Rakesh Tikait broke down and wailed as he saw the protest collapse in part due to the ruthless belligerence of the ruling establishment post the violence at Red Fort on January 26.

Farmers who had turned back and were on their way home returned to the Ghazipur border. Overwhelmed with emotion, those who had never gone to the protest sites on the borders of Delhi also left their villages to join protests. 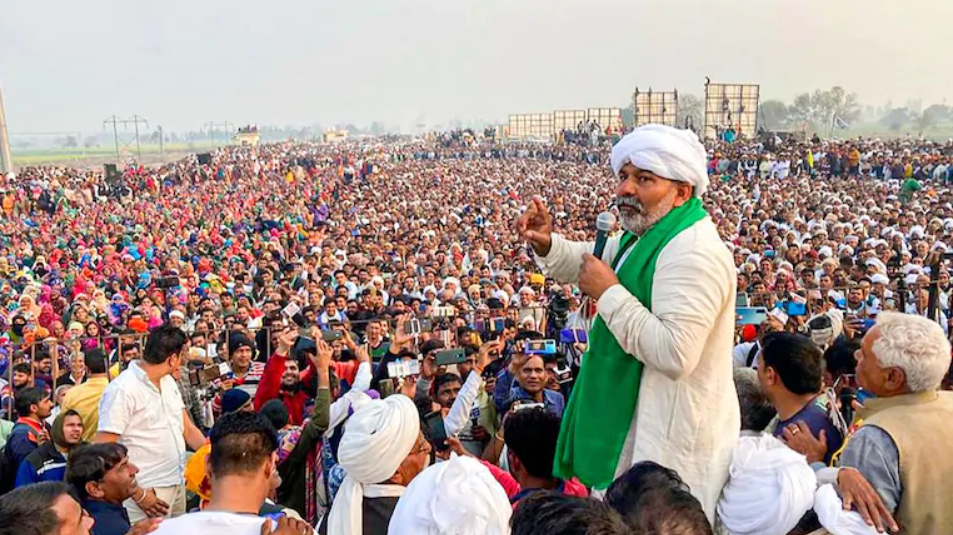 “The situation has suddenly changed here,” Kuldeep Tomar, a farmer leader who was in Meerut district, had told at the time. “All TV channels are showing Tikait crying and people are crying even while watching it. Even people who did not support the farmer protests earlier are saying what’s happening is wrong. Several people have already left their homes to reach Ghazipur and more are leaving.”

Within hours, the Ghazipur protest site was overflowing with people. The protest had been retrieved from the brink of collapse.

Son of former prime minister Choudhary Charan Singh and an influential leader from western Uttar Pradesh in his own right Ajit Singh called Tikait and expressed his solidarity and extended his support.

Overnight, Rakesh Tikait became the most prominent face of the protests and seemed for the first time capable of carrying on the legacy of his father, the legendary farmer leader Mahendra Singh Tikait.

Mahapanchayats were organised across western Uttar Pradesh bringing Muslims and Jats together as farmers who had been wronged by the Union government. Rakesh’s brother Naresh even apologised for the role played by the Jats in the 2013 Muzaffarnagar riots. Ghulam Jaula, who was a key lieutenant for Mahendra Tikait uniting Hindus and Muslims as farmers first, was back in the fray.

“It changed the political situation in western UP. It became very difficult for us (BJP leaders) to even engage with people. There could have been a setback in the assembly elections,” said a senior BJP leader from western UP.

Farmers as an electoral constituency

Western UP is crucial to the political calculations in India’s most populous state UP, where it’s sometimes thought of as the region that sets the tone for the rest of the state to follow.

The opposition to the BJP has been campaigning heavily on the back of the farmer protest in this largely agrarian region.

“We have finished the issue they were campaigning on. Now, we will set the agenda. We will raise our issues of development and law and order. They will have to respond,” the BJP leader said.

Anil Ghanwat, who is head of a pro-reform farmers body and a member of the Supreme Court-appointed panel on the new laws, also pinpointed the political considerations of the government behind repealing the laws.

“It is very unfortunate that the government has not taken any other route to convince farmers, but decided to keep in mind the assembly elections,” he said.

Ghanwat noted that the SC-appointed committee submitted a report in March which hasn’t yet been made public.

Thus, it was the resurgence of the farmer as a political entity with the potential to cause electoral damage to the BJP that paved the way for the repeal of the laws and not that the government had accepted the farmer’s contention that the laws will do them more harm than good.

The way farmers set aside their differences and united as a political force independently was a throwback to the 1980s and 90s when former prime minister Charan Singh and Rakesh Tikait’s father Mahendra Singh Tikait led multiple battles against governments on farmers’ issues.

This time around by occupying Delhi’s borders, farmers have reminded one that they are still a force to reckon with and could do an encore of the famous Kisan rallies of the yesteryears and make the government swallow the bitter pill.

The Prime Minister insisted even on Friday that in his view the laws are good for farmers and cited his inability to convince them of that fact as the reason for his decision to repeal the laws, with an apology. Far from trying to convince the farmers, the government had stopped engaging with them. On the other hand, a full-frontal attack on the farmers was launched.

They were branded ‘traitors’, ‘terrorists’, ‘khalistanis’, ‘goons’, ‘maoists’, and more by members of the BJP and sections of the media sympathetic to the government.

Over 700 farmers have died while protesting in the last year, according to farmers’ unions. Some were mowed down by a car in Lakhimpur Kheri which the son of the minister for state for home affairs was allegedly inside and who even fired at the farmers. The protest sites at the borders of Delhi have often been attacked by goons inspired by the ideology of the RSS fold.

But the farmers continued to protest even when the biggest test came post the Red fort violence. Having lost faith in the government and in the neo-liberal policies that the laws represent, the farmers argued that this is a battle for their survival and that of their future generations.

While the farmers have emerged victorious against the farm laws, their problems will remain and could become much worse due to climate change. The green revolution regions – where most of the protesting farmers came from – face rapid groundwater depletion due to the growing of water-intensive crops in regions with moderate rainfall where parts are described as semi-arid.

A transition away to less water-intensive crops is due to be made. But, as India has always argued at global climate summits, such transitions have to be equitable and just. The government is primarily responsible for ensuring this in consultation with farmers.