Only 13% of women in the country own the land they work on. The farms are never in their names as current inheritance laws are depriving them of their right. 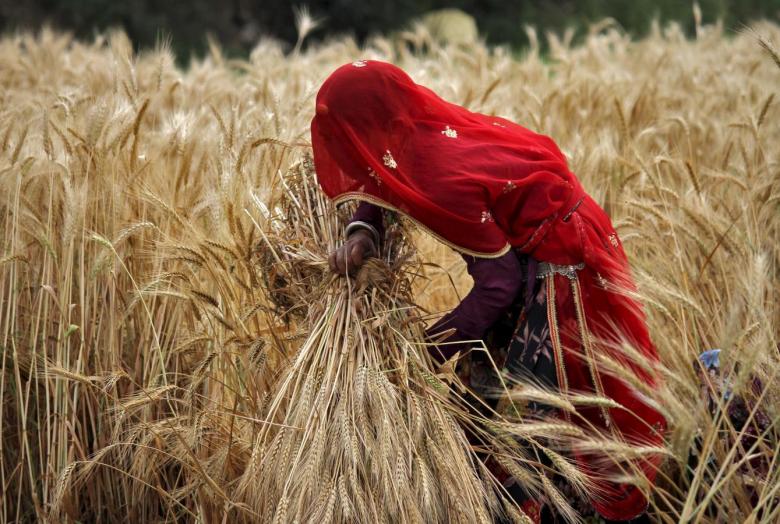 A veiled woman farmer harvests a wheat crop in a field on the outskirts of Ajmer in Rajasthan, April 4, 2015. Photo: Reuters

“By the virtue of being a woman, she’ll do all the work. She’ll get up at the crack of dawn, before anyone else in the house, finish all the cooking and then send the kids to school. Later, she’ll work in the fields, only to come home and wash everyone’s clothes. She’ll also have to make time for cleaning and other household chores.” In the short span of a breathless rant, Ramvati has perfectly summarised not just her own typical day, but the archetype of the woman farmer.

Ramvati lives in Khujurao Bujurg village in the district of Jhansi. We found her after weeks of groundwork and preparation in and around these parts, because though there are plenty of women farmers, vocal ones are few and far between. “If our husbands come home drunk, they hit us”, she adds, like a last straw to her fuming rant. The “gharelu hinsa”, Ramvati says, is as insidious as it is deliberate. “He can tell us to get lost, get out of the house if he’s angry. He owns everything, after all – the farm, the house.”

It does not matter then that Ramvati, the most hard-working individual on the fields, is considered akin to mere worker status, perhaps worse off than that. Only 13% of women in the country own the land they work on. The farms are never in their names – women are never referred to as farmers, the term being limited to men. The term that usually goes around for women is ‘farm worker’. Complement that with the other mind-boggling statistic – 60-80% of all farming work is done by women – and the dismal state of affairs becomes 100% lucid.

Ramvati vociferously lists out the multi-pronged nature of the problem, “Men get all the rights. It is assumed that the land will be in his name after his father’s death. That is what is legal, this is what the laws of inheritance states. So what does that leave us with? Nothing – or a whole lot of promises”, she says. “Each time, during the elections, we’re told again and again that we will be getting our rights as well; that we will finally be acknowledged as farmers. And it all comes to nothing as soon as the campaign is over.”

“Hamaari sunvaai bhi ho, hamare behnon ki bhi (Let my voice along with my sister’s be heard)”, she says, even as our interview is paused – somewhat indefinitely – so Ramvati can tend to a sick relative at their house. Yes, everyone’s medical issues are her issues too. It is assumed, much like the sun rising every morning with a little too much fire in the badlands of Bundelkhand, that if someone is sick at home, then the woman must take charge in her “natural” role as care-giver. Added domestic responsibilities, however, do not take away from her role in the fields where she is mostly assigned what are referred to as “donkey’s jobs” – the hard labour of sowing, seeding, threshing, harvesting and ploughing. Unfortunately, the skills that are involved in each of these tasks are not talked about often, or often enough. At the ground level, they are not even considered, and it is common understanding that the man is the one bringing the special skills required of a farmer. At the local galla mandis too, women farmers face serious discrimination, and are offered raw deals, often laced with sexual harassment – to which no legal recourse is ever sought or granted. As Ramvati says, “Neither do we have the empowerment that comes with information, nor is anybody interested in giving it to us. Who wants to ensure for a woman’s rights?”

In a landscape where the plight of farmers is only deteriorating, with the entire nation on the brink of, or in the midst of, one of the worst agrarian crises it has faced, the story of women farmers is that of double jeopardy – being a woman and a farmer – both lives of unparalleled forbearance and unmitigated thanklessness.

And this despite the truth that Revati says as a woman farmer, “Women are not less than men. Do you say they are equal? No, they are more, much more than that. They are far greater in their work, in everything.”