A well known farmers' leader told The Wire that the only reason that Gujarat farmers were not able to protest against the farm laws was strict police surveillance that made it difficult to leave the state. 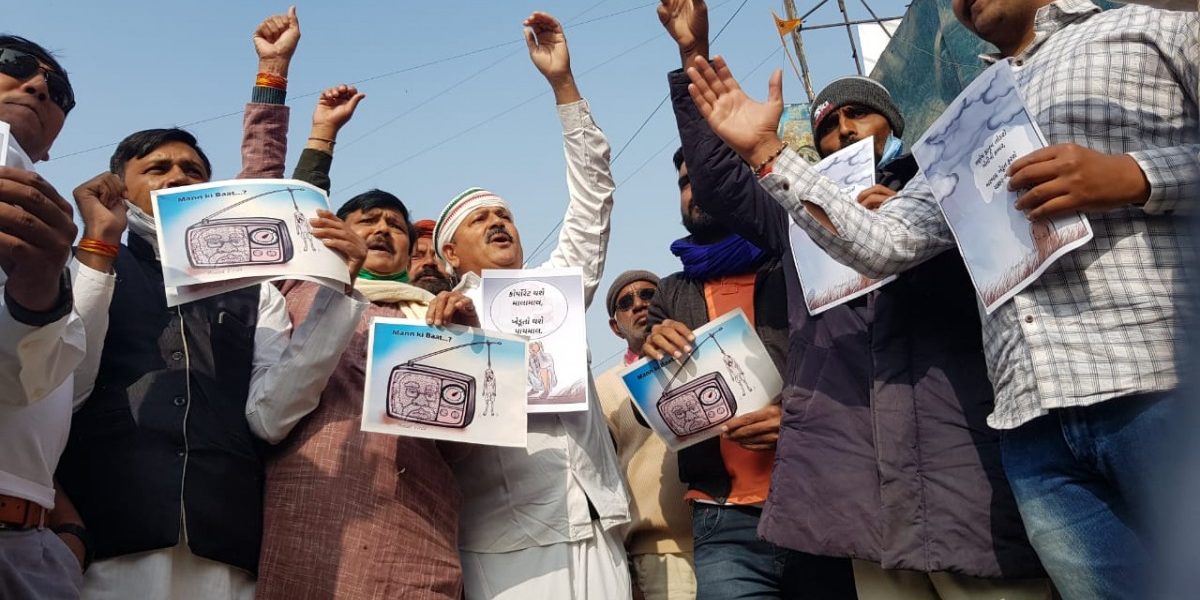 Farmers who have made their way out of Gujarat at the Singhu border. Photo: By arrangement

Mohali: Farmer leaders from Gujarat – Prime Minister Narendra Modi’s home state – say they have had to disguise themselves to evade heavy police surveillance and join the protests against the farm laws.

Palbhai Ambaliya, Yakub Guraji and Jayesh Patel, along with other leaders and representatives from the farmers’ unions of Gujarat, had formed an umbrella organisation called the Gujarat Kisan Sangharsh Samiti, on December 6, to mobilise support for the ‘Delhi Chalo’ protest by farmers in north India.

However, almost every leader present at the December 6 meeting was put under house arrest by the Gujarat administration to thwart any plans of protests, several of the farmers said.

While the popular narrative around the farmers’ stir has been that only Punjab and Haryana farmers are agitating against the laws but the truth is that farmers from Gujarat are not joining it because they are not being allowed to, Ambaliya told The Wire.

“The Gujarat government has deployed the state police to monitor cell phones, our WhatsApp chats, the movement of our vehicles and the people coming out and going into our houses to prevent us from mobilising,” the popular farmer leader and activist said over the telephone.

Farmers who have made their way out of Gujarat at the Singhu border. Photo: By arrangement

Another farmers’ leader Yakub Guraji accused the Gujarat police of harassing his family as he tried to make his way to New Delhi to join the protest.

“Eight to 10 police personnel blocked my way to Delhi on December 11. They took me in custody and kept me in a cell for a night despite the fact that they couldn’t cite any charges,” he said.

While farmers demonstrated for his release, police harangued Guraji’s family, asking his son about his work. He was released only the next morning.

“I told the police that over 10,000 people will march to Delhi from Gujarat in batches. How many people can they arrest and detain?”

Also read | Protesting ‘Agri Reform’: Why Do Farmers Feel the Deck Is Stacked Against Them?

Today, December 15, the prime minister, while speaking at the inauguration of a mega energy project in Gujarat’s Kutch, has said that the government of India is “committed to farmer welfare and will keep assuring the farmers and addressing their concerns.” Modi also blamed the “opposition” for misleading the farmers at a time when the nation is taking a “historical step.”

Excerpts of the conversation with Ambaliya offer a detailed picture of the degree of police surveillance to which farmers in Gujarat are subjected. The questions and answers have been edited slightly for clarity.

First, how did you escape the police?

On December 6, the Gujarat government somehow found out about our meeting which was conducted in Ahmedabad under the banner of the Gujarat Kisan Sangharsh Samiti. At the meeting, we had announced that a Kisaan Sansad programme will be held on December 11.

Before hosting the programme, we asked the government for permission, but it was rejected. Our plan was to hold the Kisan Sansad and leave for New Delhi in a rally 2,000 peasants and workers. The Sansad was scheduled to have speeches about the farmers’ issue alone. But the government didn’t grant us permission.

On top of this, from December 10 onwards, the police started arresting all farmers’ leaders one by one.

As soon as I got to know of this, I left my home at Dwaraka and made my way to Junagarh to dodge my impending arrest. I switched off my phone. Once I reached Junagarh, I switched my phone on briefly. The police managed to trace my phone somehow. I got a couple of calls from the police saying I must not leave the place.

Also Watch | ‘If We Do Not Stand for Justice for Human Rights Activists, Then Who Will?’

But then I switched my phone off again. I knew which way the police were coming for me, so I took the opposite route. I went to Kutch, then from there to Gandhinagar. I navigated my way through the state while the police were chasing me.

At Junagarh, I decided to put on a disguise. I changed my hair. I usually wear a traditional dhoti but I bought a pair of jeans and a shirt and put them on. I gave my car to someone else, and got myself another car. I reached Udaipur on December 12.

Similarly, Dahyabhai Gajera,  another farm leader, was under house arrest. But while the police were at his front door, he managed to escape through the backdoor with the help of  his son. His son quickly dropped him off at a nearby bus stand. From there, Dahyabhai took a bus to Udaipur secretly.

As we speak, over 16 farm leaders from Gujarat are under house arrest. Not everyone has the strength to evade a police chase like this. Very few of us could do it. Despite all this, there are around 150 people who have been able to leave Gujarat so far. Some of us have reached the Delhi-Jaipur border and some are at the Singhu border.

Since when have Gujarat’s farmers been vocal against the farm laws?

The farmers of Gujarat have been mobilising against the ordinances since the very first day. When it became a Bill, we condemned it. When it was passed by a brute majority, we condemned it. But none of us were allowed to voice our condemnation on a larger scale.

A day before farm organisations called for a Bharat Bandh, the chief  minister [Vijay Rupani] addressed the traders of Gujarat via the press to say that they must not support the farmers. The government also issued a Section 144 order. All this is being done to create an environment of fear.

Why does the Gujarat government not want you at the Delhi protest site?

Let me tell you the biggest fear that they have. Look at the way the government is praising the new laws that they’ve passed. They’re trying to meet people in the village to convince them of the laws. Just like this, a few years ago, the government had launched a crop insurance scheme, which was also praised like these laws are being praised.

But in Gujarat today, the entire scheme has proved to be a big failure.

The insurance companies and the government are corrupt. This scheme was also called prime minister Modi’s dream project. If it was a dream project, then why was it suspended in Gujarat? We will talk about all this at the Delhi morcha and that’s why they don’t want us to be there. The real Gujarat model will be revealed to everyone.

How many farmers from Gujarat are likely to join the stir at the borders of Delhi?

Around 200 more people are leaving for Delhi now. They will also leave like I did, in secrecy. Right now in Gujarat, you can’t even say that you’re going to Delhi. You can only speak about the movement after you’re out of Gujarat. This is the Gujarat model. All our phones, WhatsApp chats, our vehicles, everything is being watched.

Today the Prime Minister is meeting the farmers of Kutch in Gujarat. Is he meeting them to allay their fears?

After 2002, Kutch became a free zone for business. At the time, a lot of sardars moved to Kutch to do business. The sardars in Kutch are traders, not farmers. The soil in Kutch is not fertile enough for farming.

Also, the strategy of BJP has been that they will speak to people who speak their language. The farmers who he is meeting will do that. And it’s not like BJP does not have farmers as its members and supporters. There are some farmers in BJP also who believe in their party’s ideology.